The forecast for today was beautiful, and the sun was out early. Twentyfive volunteers turned up today, a smashing turnout. Here's what we did: 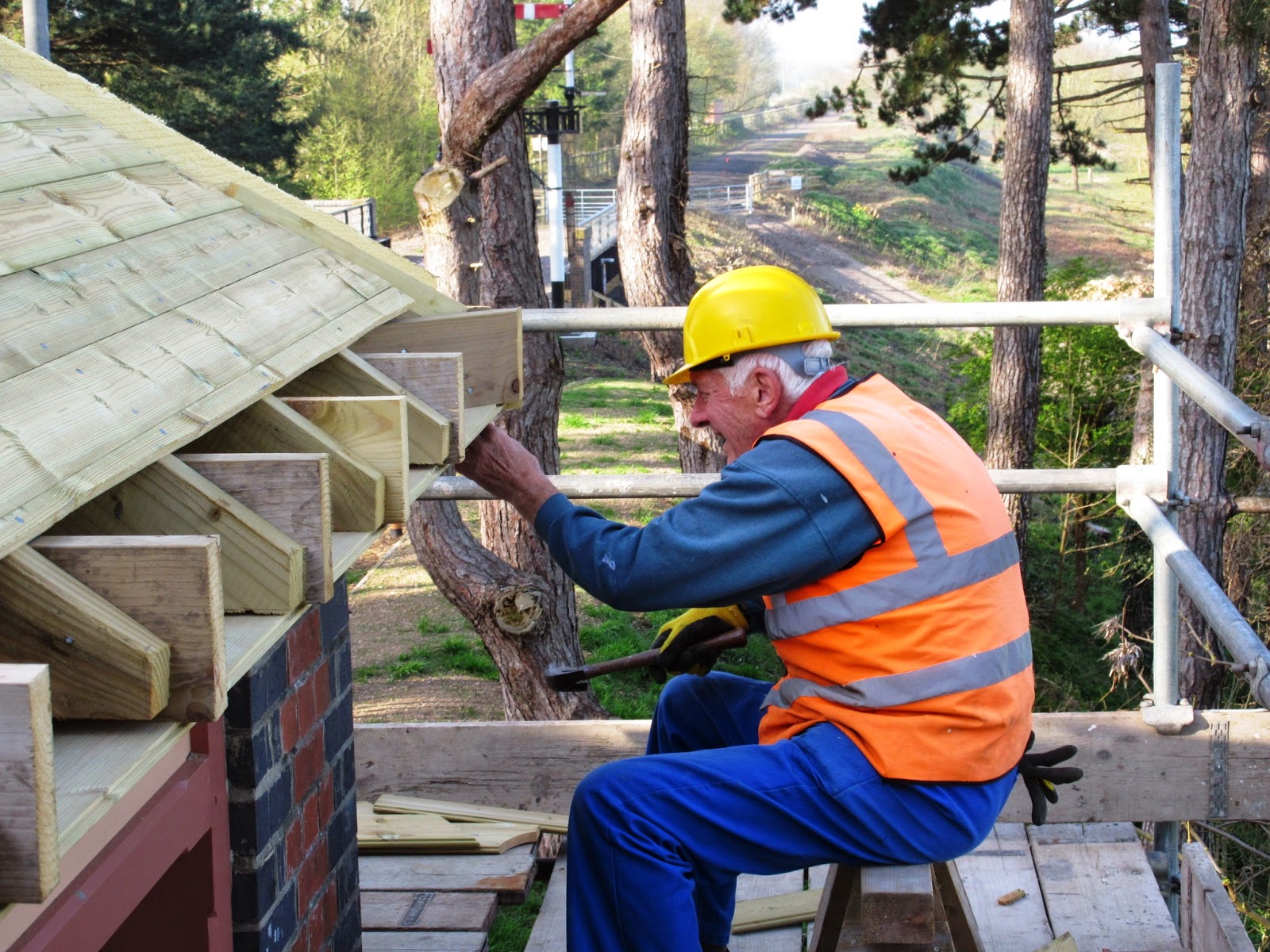 Much activity was seen on the signal box once again. Two gangs were busy on it - one fixing the fascia boards, and one on the T & G at the rear. Here is Peter Q nailing on the last of the soffits at the rear - they needed a lot of measuring and cutting. 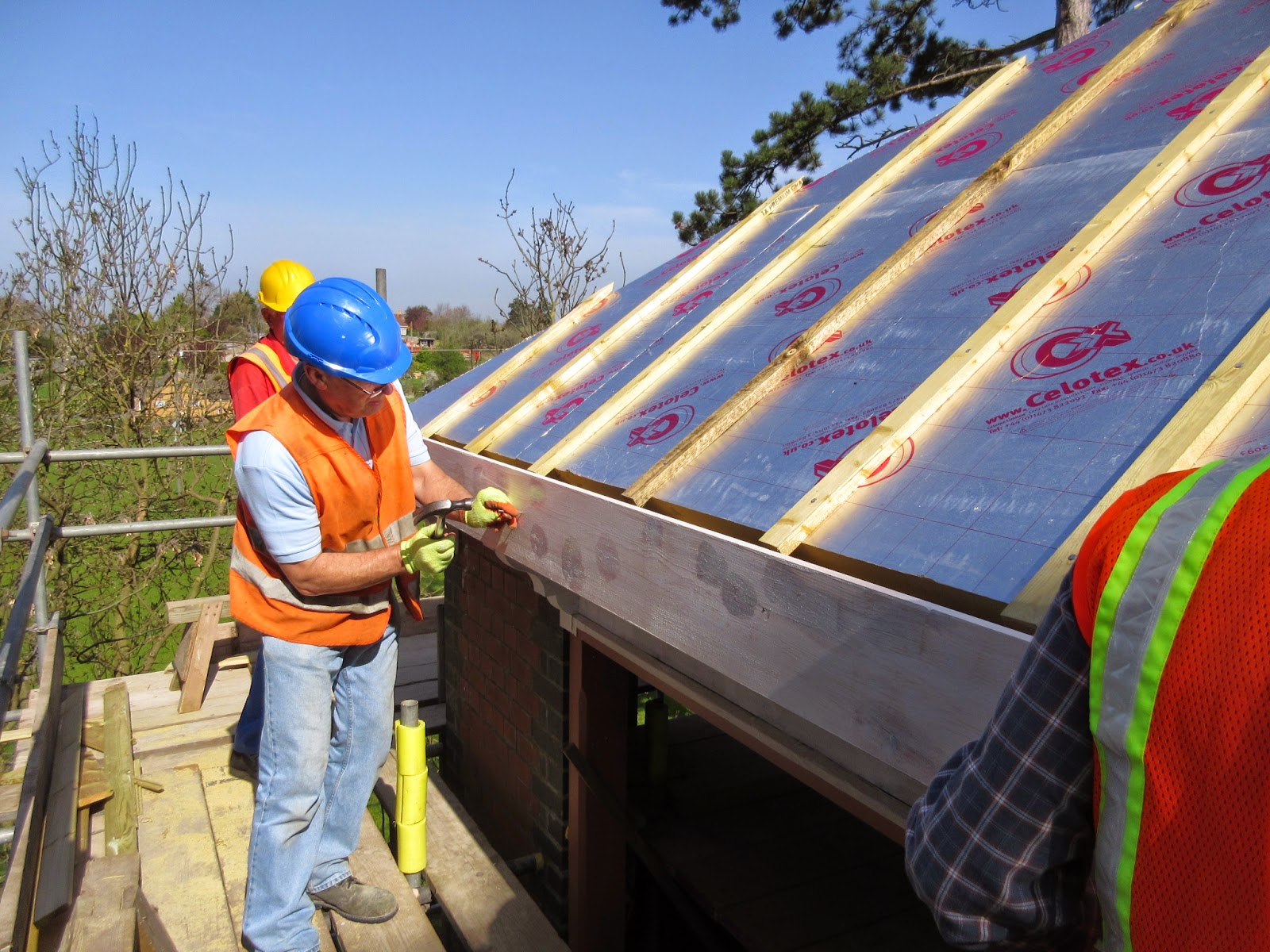 The fascia boards were carefully sawn to fit, using the angled circular saw. They were then nailed on, and in this picture John S is sinking the ovals with a drift. The resulting depressions were then filled in again. It's going to be such a lovely paint finish, pity that no one will be up here to inspect it once the scaffolding comes down again. 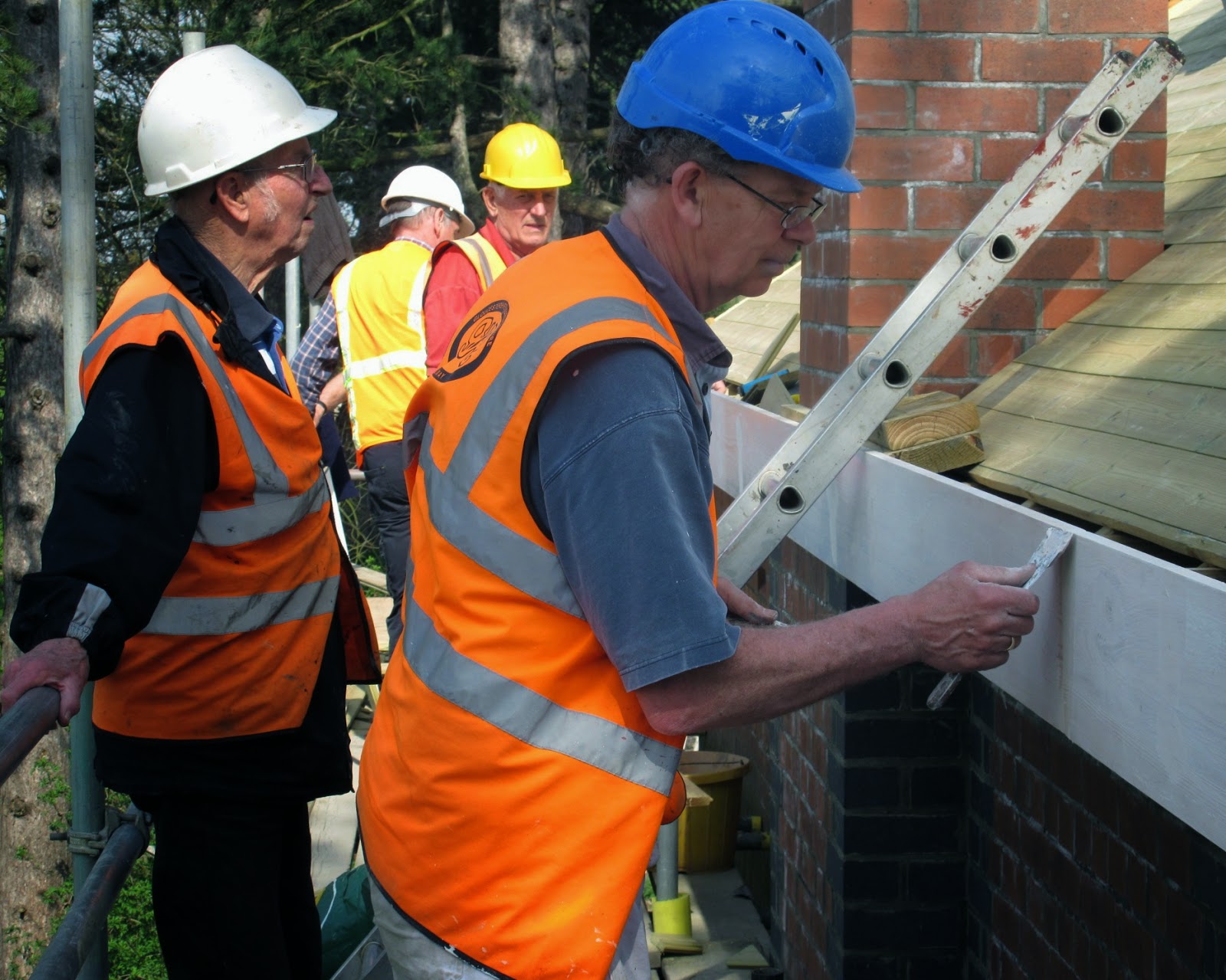 Graham D also came down today - he's a professional decorator, bets known to yours truly as the man who painted the white stripe along the platform edge. That makes such an impact.
Here is Graham filling in the nail holes, and shortly after that he sanded the result down again, and went round both fascia and soffits and put on a dark grey undercoat. The final colour scheme up here will be light and dark stone, so don't worry about the dark grey you can see on the webcam 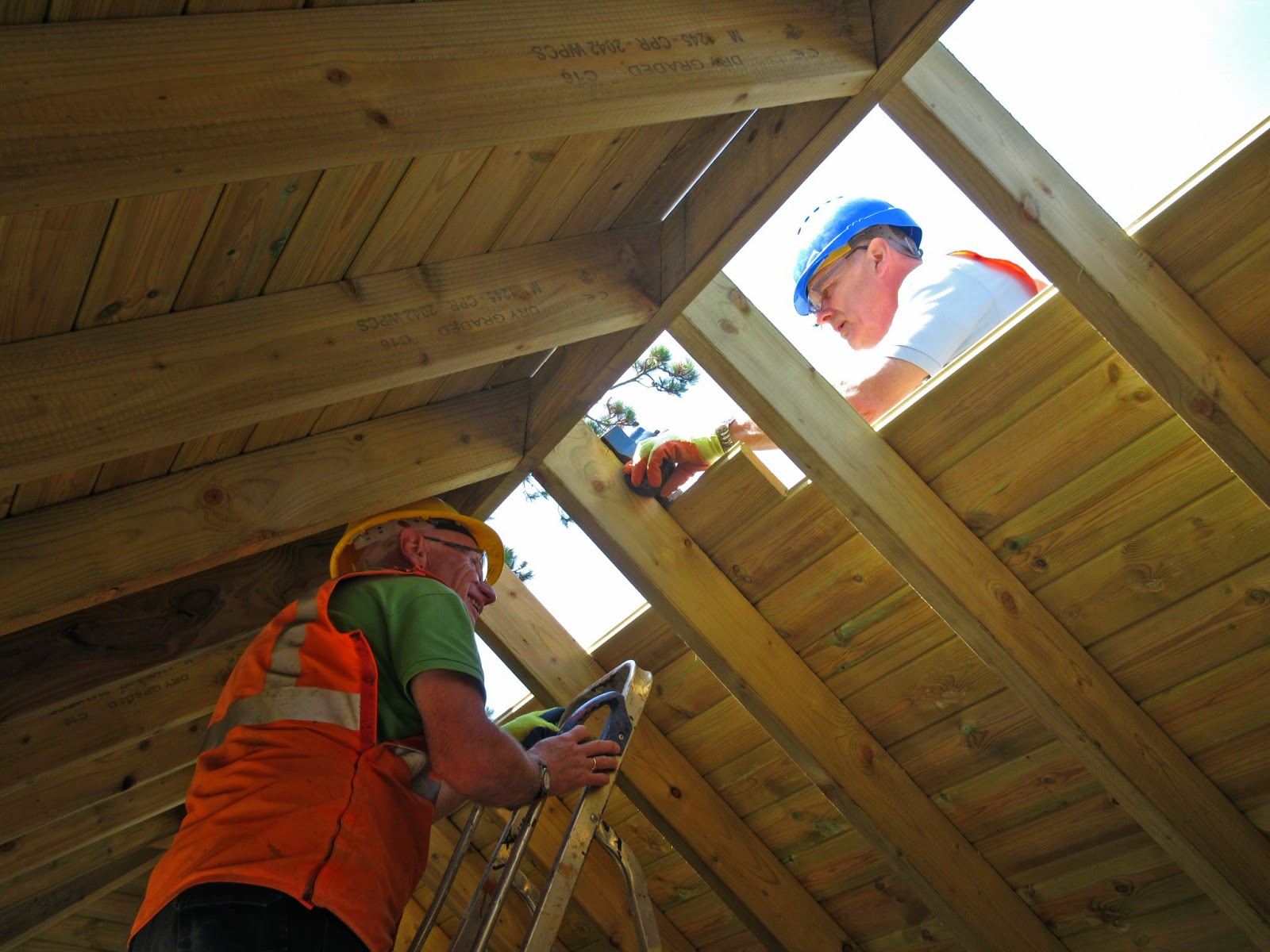 Work then continued on the T & G boards along the fourth, rear side. There are 21 rows to the side, and we started on row 10, finishing with the penultimate row for the day. Just the top one is left to go, that one is a bit more complicated as semi circular holes have to be cut out in the right place to cater for the cast iron ventilator tubes.
As we went further and further up, space got a bit tight for Tony - and it wasn't just his stomach! - so he had to revert to working from the inside, with his hand sticking out.
Here the last three rows mounted are being pressed into their grooves, then firmly nailed down.

At the end of the day this was the view along the rear: 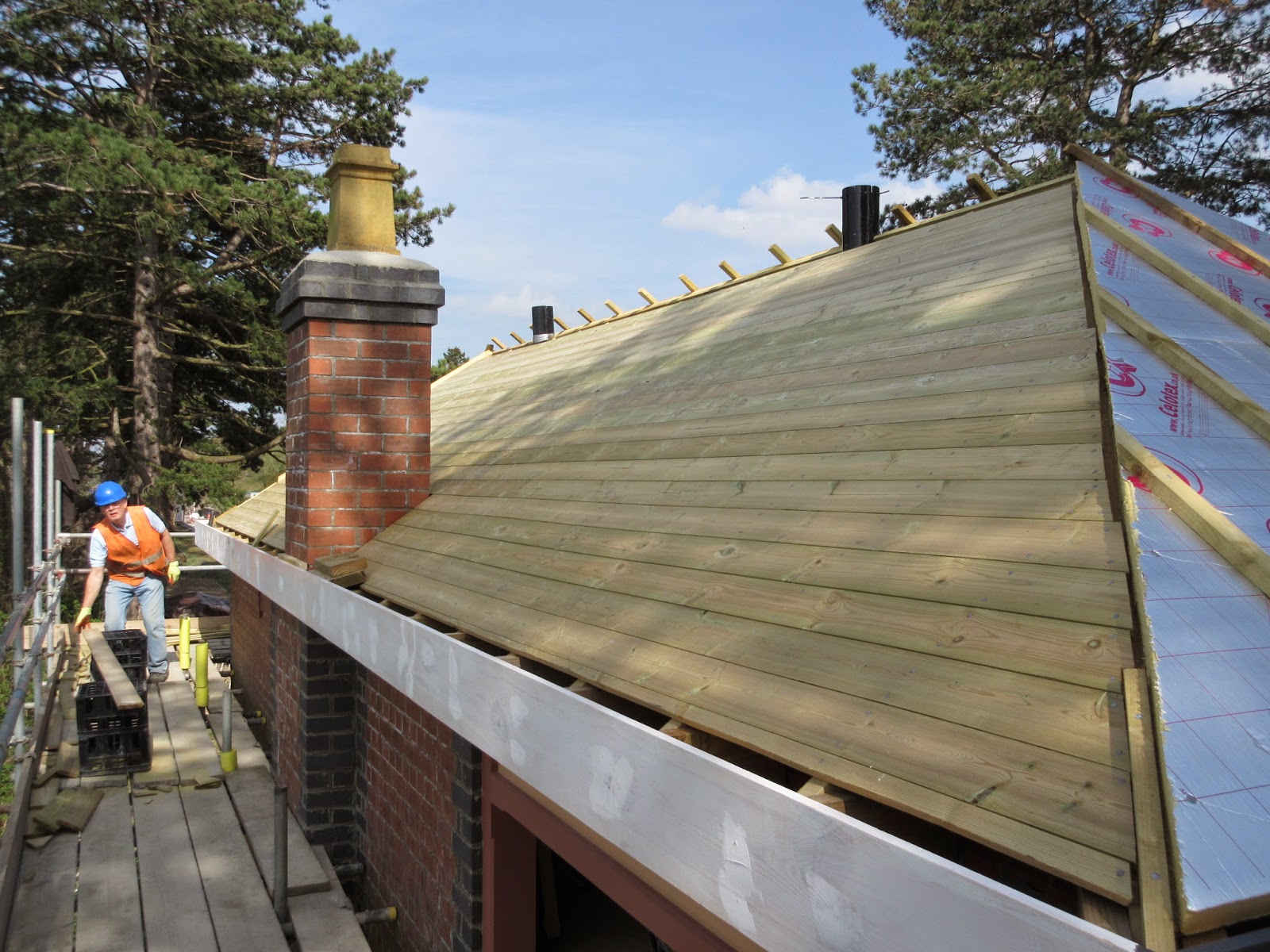 Fascia board fitted and rubbed down, T & G boards all the way up to the top, bar the final row. Next time: the top row, and the insulation boards. That should make the box almost waterproof.

As we are nearing the moment when we cast the foundation slab, the order was given to retrieve the last original bricks remaining in the former station footprint. 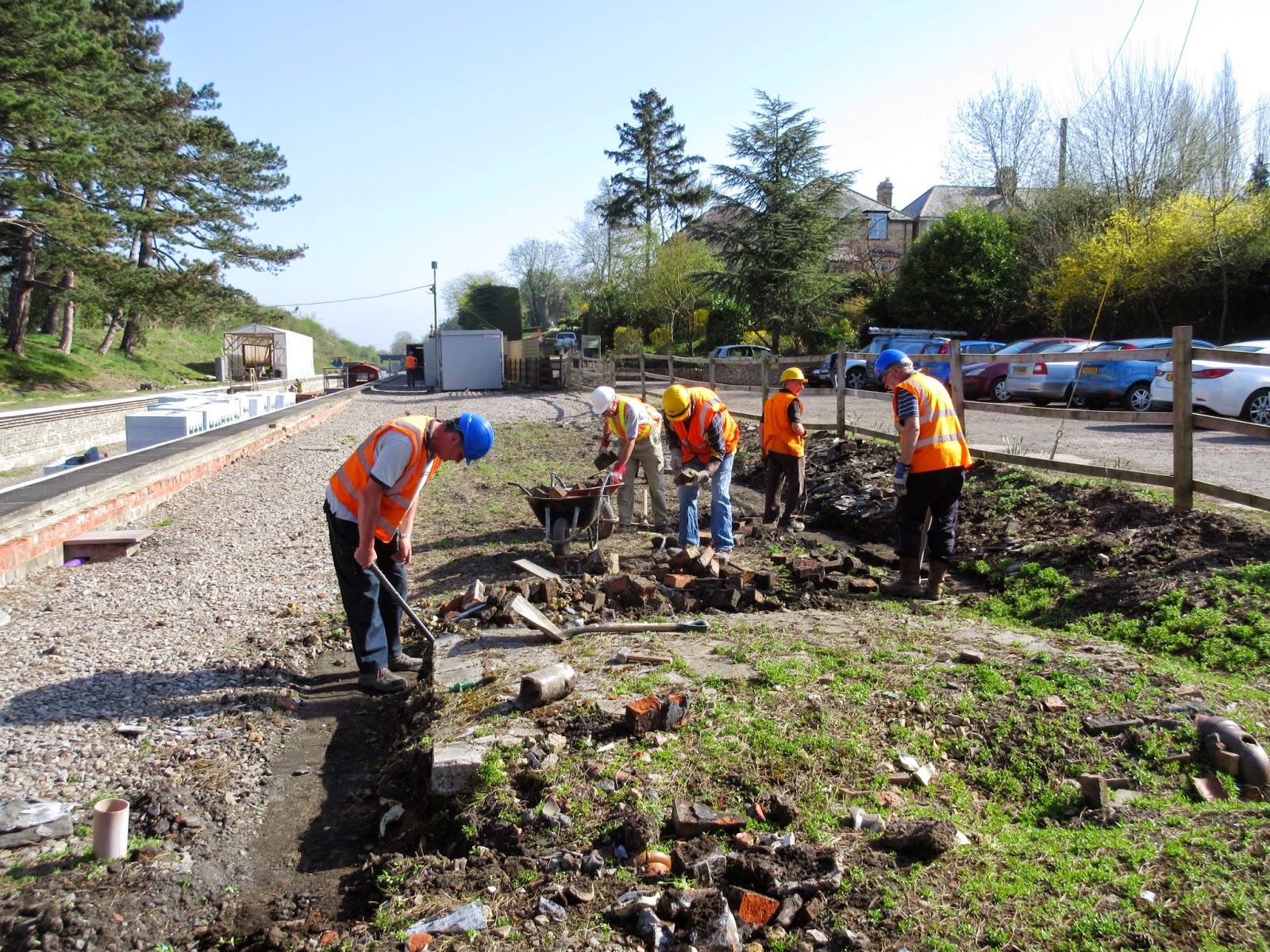 A team of 6 started on this job, seen here at the gents' toilet end. Something under half of the former building was stripped down like this, and around 400 bricks retrieved.  This will give the brick cleaners something to do again for a while. The gent's slab urinal was removed, and the fireplace in the former ladies' waiting room uncovered. 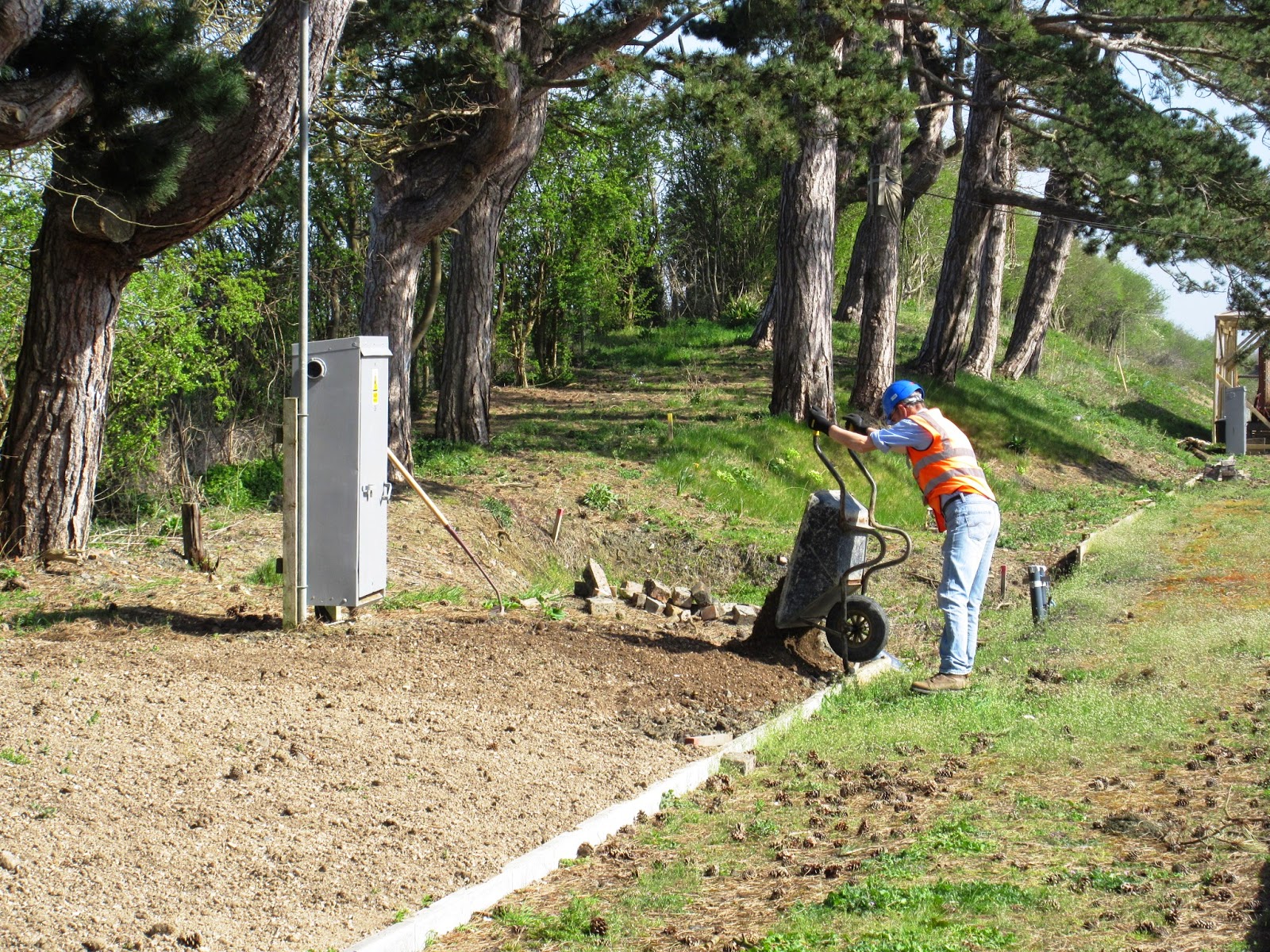 On the opposite platform Roger carried on with the spreading of topsoil, and alone he completed the future lawn area up to the grey electrical box. The first half of it was also seeded, until supplies of grass seed ran out. Now we need some gentle spring rain.

When the dumper has been serviced and repaired, we will continue with topsoil in the area of the former slip on 2c, which needs finishing off. 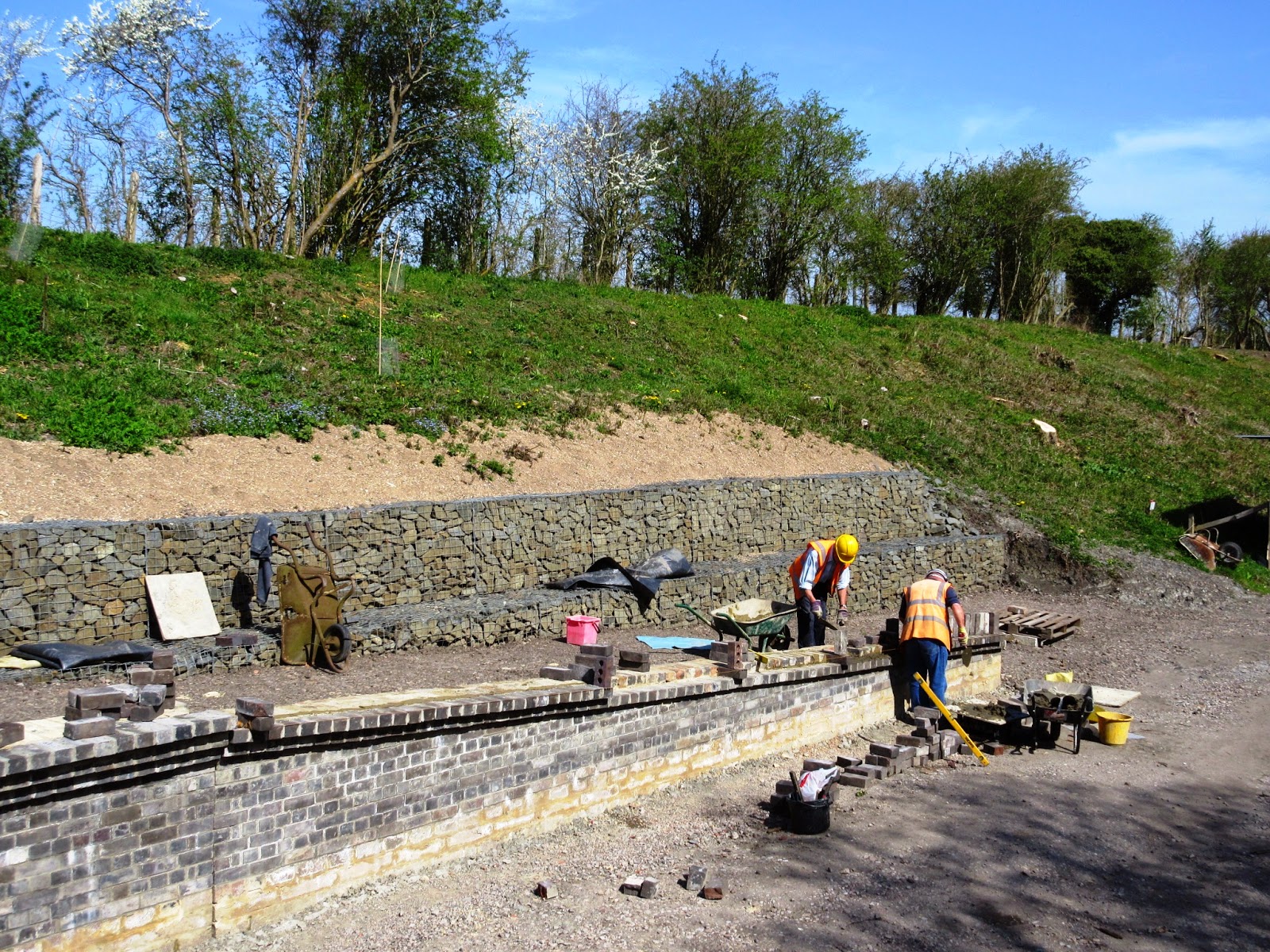 In this picture you can see the former slip and the new gabions. This area also needs seeding. In the foreground are Clive and Peter H working on the 2c slope. Clive added a row of corbelling bricks here, and Peter backed up the rear in plain bricks.

Now there is just the final row of corbelling to go, then slabs - if we can find some. Actually, we know of several locations, but actually getting your hands on them is the tricky bit.


Further up the site, Rod and Terry managed to clear the last obstruction in the drains, by the northenmost catch pit. The blockage isn't completely cleared, but they got a plunger through, so water is flowing.
In the afternoon they addressed one of the French drains that are laid a 90 degrees to the track, channeling rainwater down the cutting sides. This was clogged up with greenery and rubbish, which they removed, thus making this open drain more efficient again. 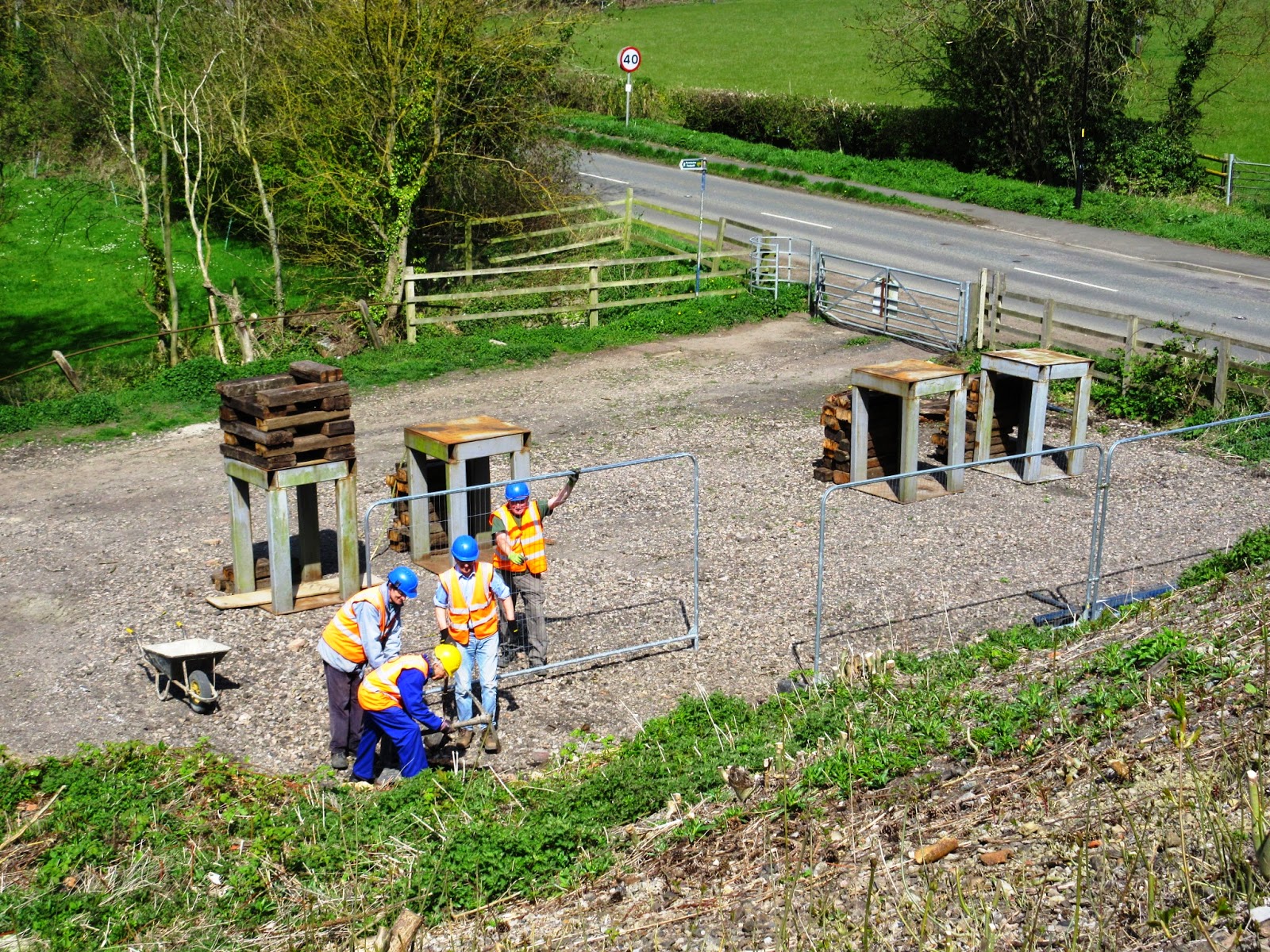 In the 'car park' field, Jim, Roger, Chris and Dave erected some Heras fencing panels that we had. These will eventually seal off the future work site for the footbridge steps, which are due to be unloaded here.
More fencing panels were expected late afternoon, and Roger kindly volunteered to stay with Jim, have a brew or two, and wait for these people to arrive. An earlier attempt to purchase such Heras panels failed, as we paid for the stuff, but the supplier never delivered, despite regular promises. Incredible. We got our money back from the bank, having used a credit card. It just goes to show that you must use a credit card when dealing with unknown suppliers for the first time.

On the footbridge we also received a visit from a potential shot blaster, who came to do a test on the centre span. This test proved useful for both parties, and we both learned something from the session. 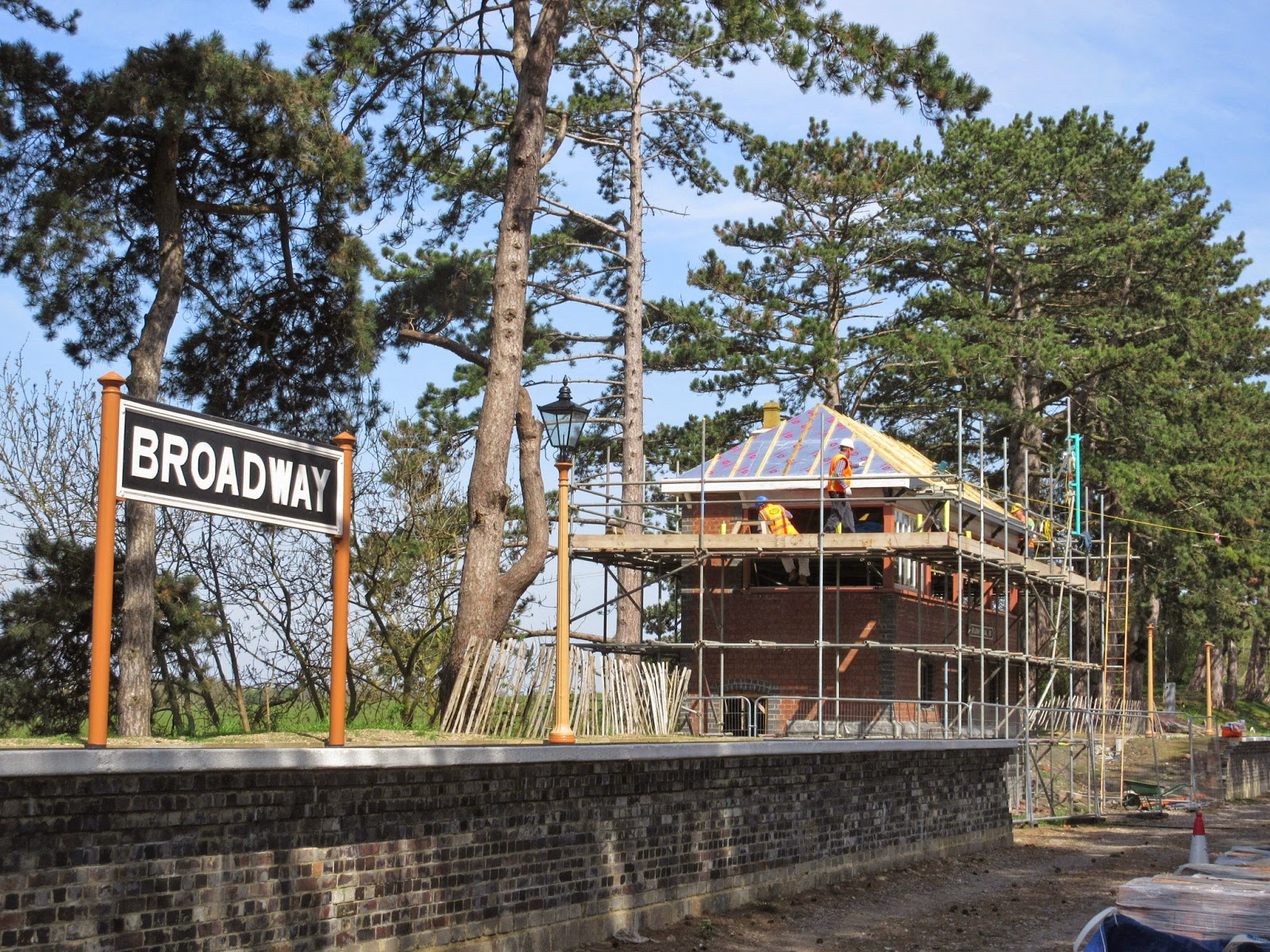 Here's our end of the day shot - the signal box, with fascia boards. Can you imagine this scene with a train in the platform? The signal box and replica running in board really look the business, and will do a lot to rectify the impression given by some of the less historical looking structures on the railway. This is proof that we can do it, if we want to.

Jo, never forget that the 'less than historical looking structures' you refer to are generating the income which is allowing you to indulge yourselves at Broadway,


Indulge! The 'Indulgers' turn up rain, frost, sleet and gales for their indulgence. Get a life Richard

goodness me, how many hours have these people been slogging away against the odds? indulgence?

Mickey Mouse would be ashamed of the Broadway signal box and for that we are glad. Well done lads. Great authenticity and we appreciate your efforts.

Some of the best 'indulgence' I have seen, such fantastic work by Jo and the team, best to ignore certain comments and carry on.

I understand Richard's argument but I think the word, "indulgence" is not quite the right choice of word to use in this case and others seem to agree. What may well happen in future is that the current "less than historical structures" will be modified or even replaced by more accurate, albeit more expensive structures because the GWSR itself will demand it; the heritage railway movement will continue to improve in all respects, including historical accuracy.

I am obliged to leap to our defence re the comment of "indulgence". I believe that indulgence is being confused with passion. The 30+ BAG volunteers are passionate about what they do. They work long and hard to deliver a Broadway Station that the GWSR can be proud of.

Our Mission Statement from day one has been:-


The Broadway Area Group are committed to the rebuilding of Broadway Station and its operating services, restoring it to its former glory, and when operational, increase the profitability of the Gloucestershire Warwickshire Steam Railway, improve business opportunities for the Broadway Community and create a Heritage Railway experience for all to enjoy.

I only wish the same passion and drive was going into raising funds to achieve this. The alternative to raising the funds is to spend what is available on a lesser end product. I would say to the Board - Do not sell us short now - we are so close to delivering a fine station that will be the envy of the Heritage Railway community worldwide.

From the other side of the fence, being just an indulgent donor. I am in awe of the volunteers and have always tried to chip in whenever the bloggers have asked for assistance.Looking forward to the bus rally when I can personally inspect progress & chip in again

Wonderful work. Congratulations to all concerned.

When is the bus rally? Will it be on the next open evening?

[Is there something wrong with the security of messages? I simply tick 'Please prove you are not a robot' and I can then post without any need to input the security text].

the security is a new kind of capcha, it judges that you are not a robot by the random movement of your mouse as you move it to the check box. if it isn't a random movement you still have to do the phrase. only works with a mouse, not with touch screens,

I echo the statements above- since when was passion an indulgence? Without passion, both locally like this, and nationally, we don't amount to much.
You have achieved, and are achieving wonders at Broadway. I am a long term Bluebell member, but I have to say that your standards here are setting the bar just that bit higher! Mark