As I drove from Cheltenham in bright sunshine this morning, I was hopeful that a sunny day was on the cards. Not so! as I went over the brow of Cleeve Hill the mist enveloped me, and the car temperature gauge dropped to 3 degrees and that's the way it stayed at Broadway all morning! After doing my morning stint, out came the sunshine as I drove home. Nevertheless the weather didn't stop 25 volunteers turning up and giving it their all, all day. 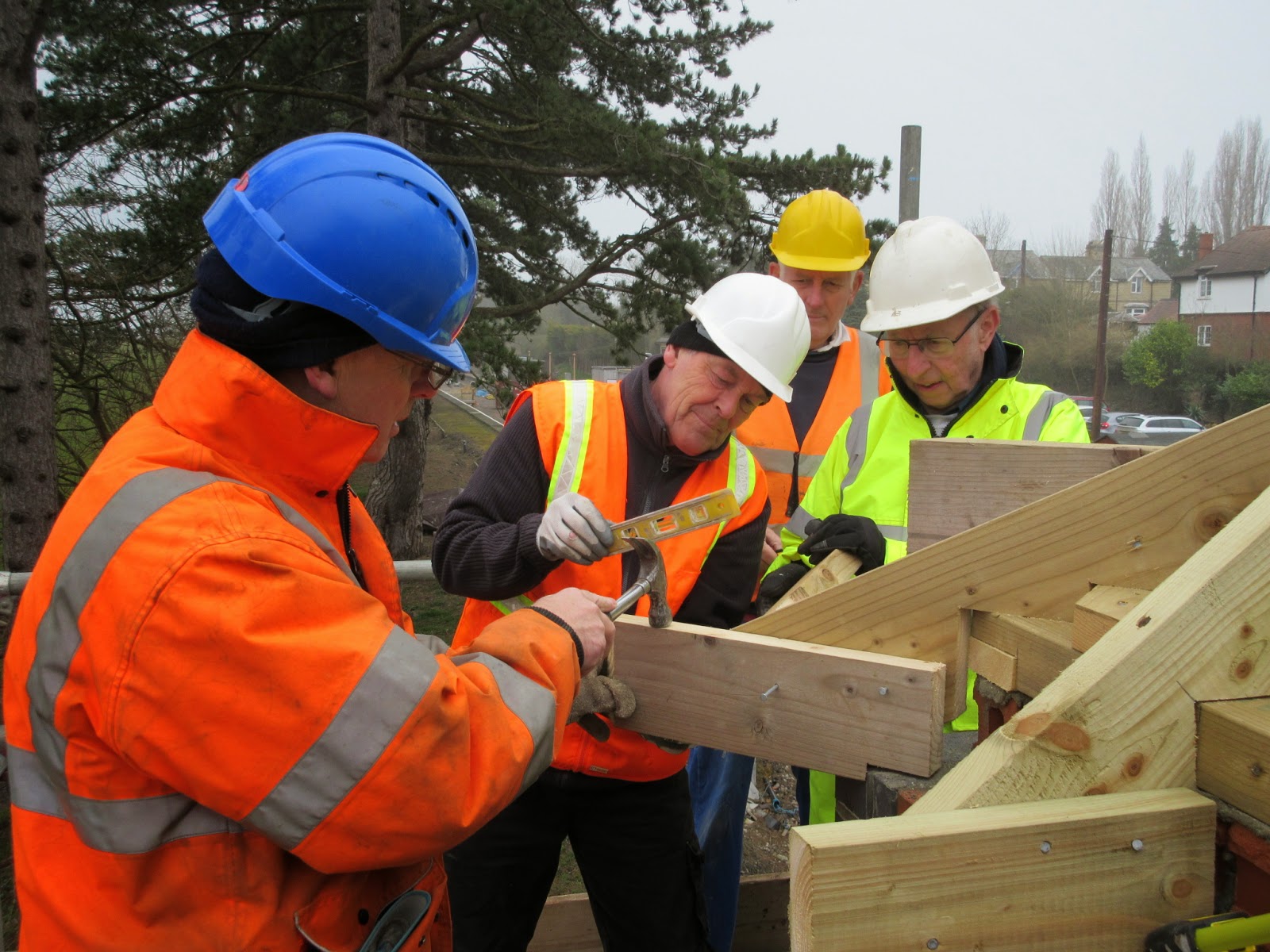 Starting with the Signal Box today, a team of six were continuing with the carpentry on the roof.
I learn new terminology all the time on this job. Here John S and Paul are putting the last of the noggins in. Peter Q and Peter T are admiring the the hammering technique! 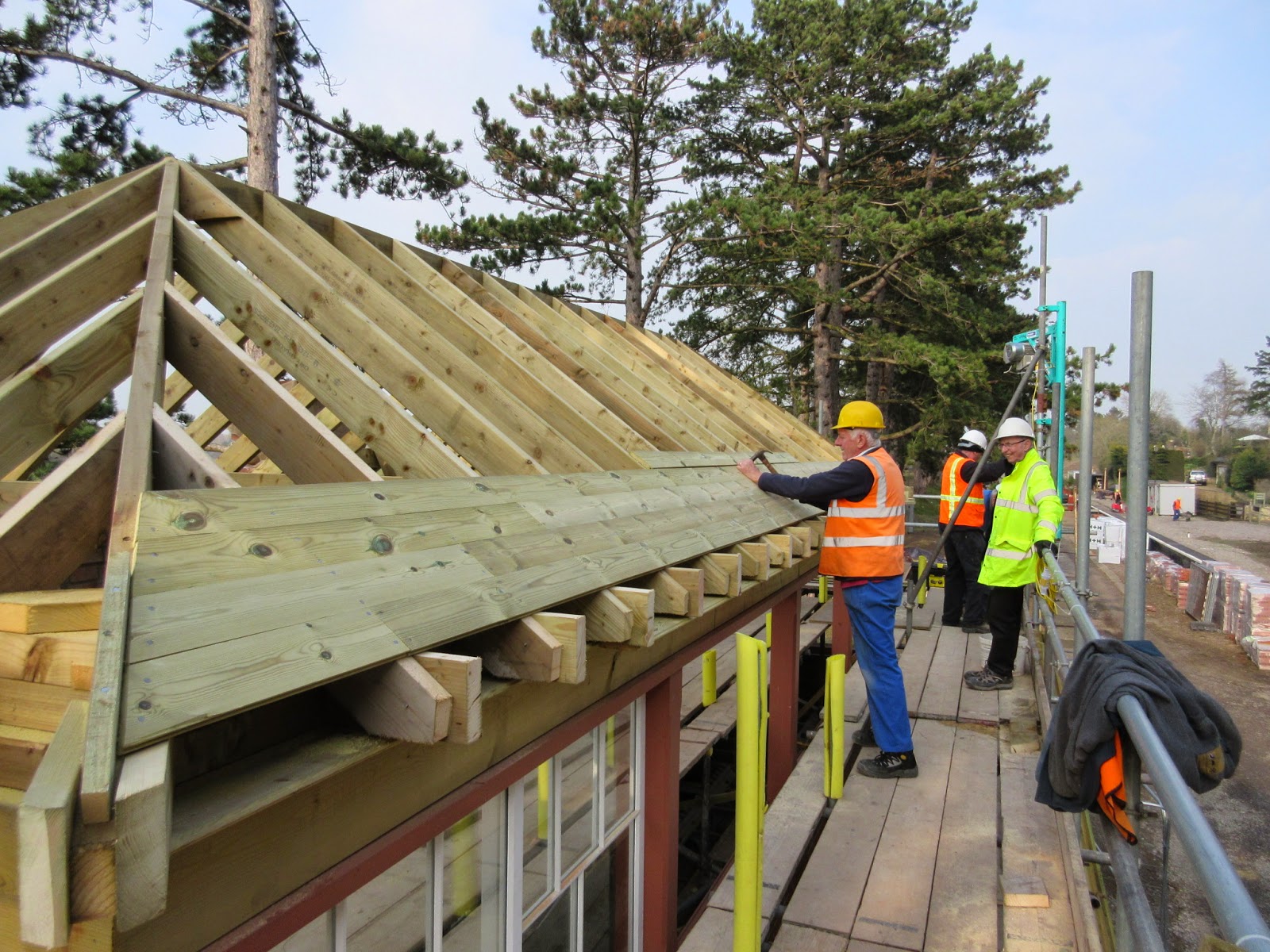 Once finished on the above, work started on cladding the roof with T&G. Here is  a good picture showing all the noggins sawn to size and the cladding started, which will proceed quite quickly I'm sure.

I can see this was the afternoon because there is some blue sky showing! 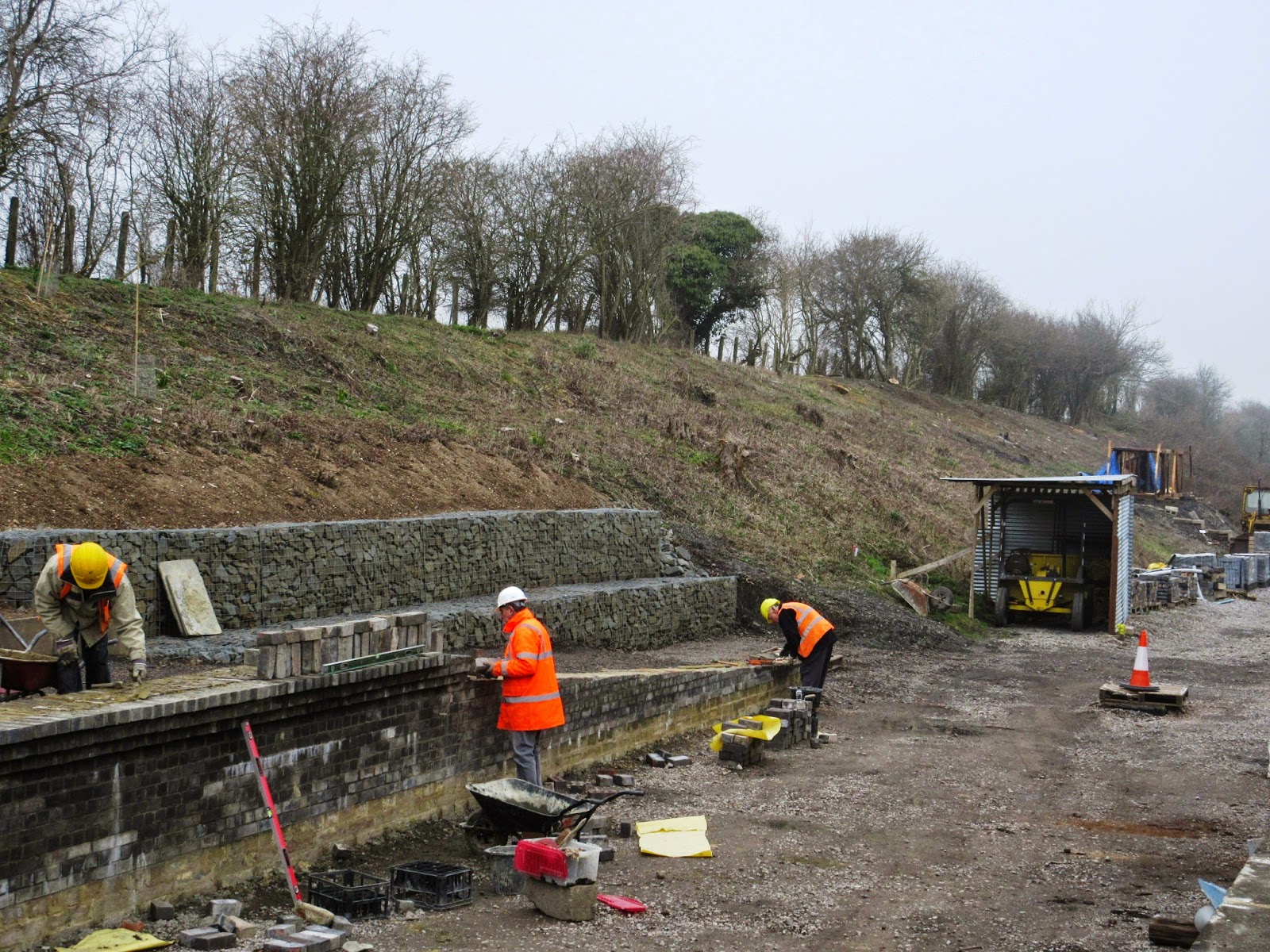 Farther north on  Platform 2C Roger B Peter H, and Bob J were getting on with the corbelling. I think Peter is going to end up with a stoop by the time this is completed - he's drawn the short  straw to do the backing bricks. 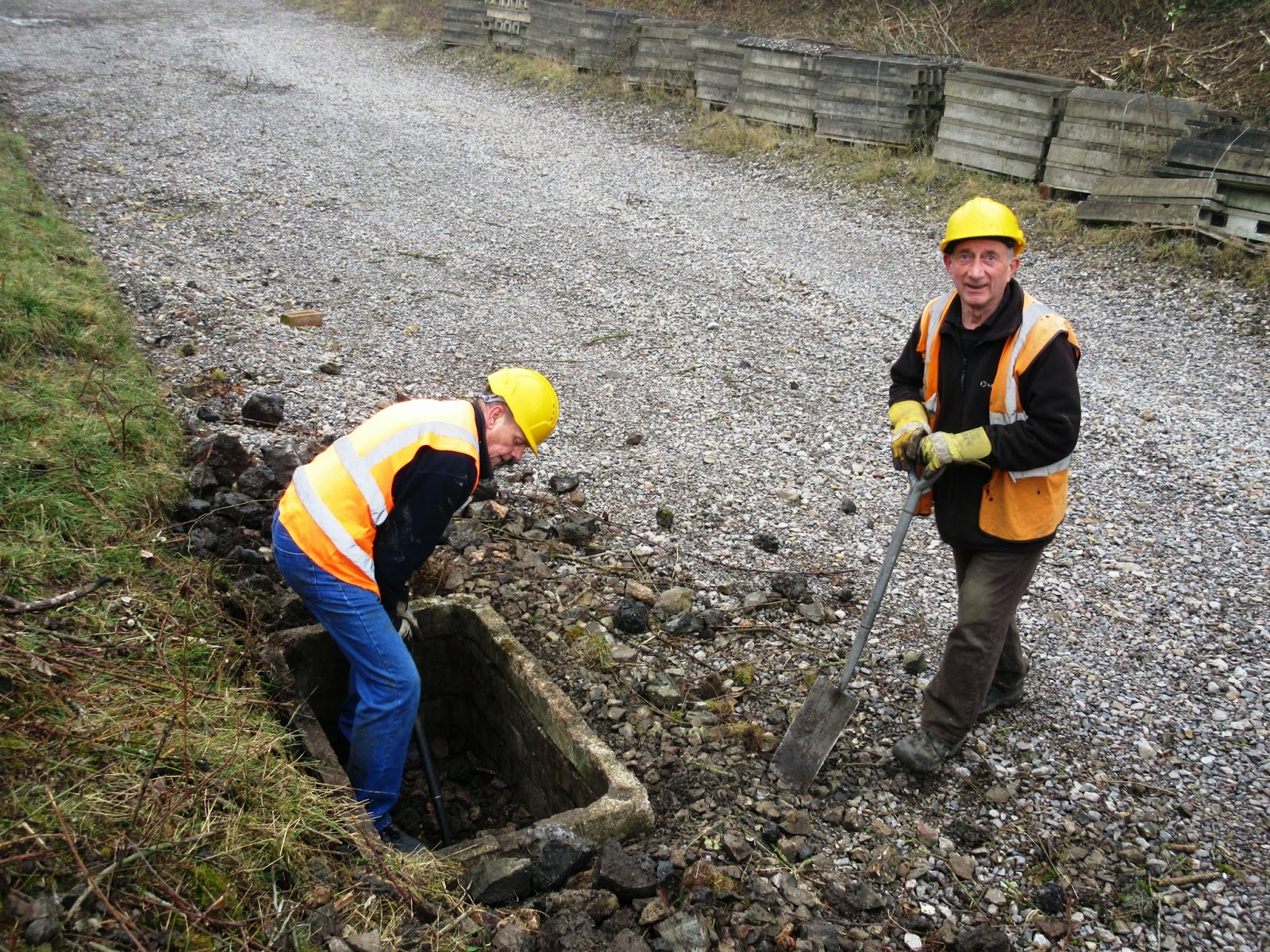 Farther up the cutting the real back-breaking work was going on  - clearing the catch pit  drains. Frankly if you haven't done it you won't know what hard graft it is.

In all 6 pits were cleared by Terry(left) Steve, and Rod, taking a well earned breather (below). 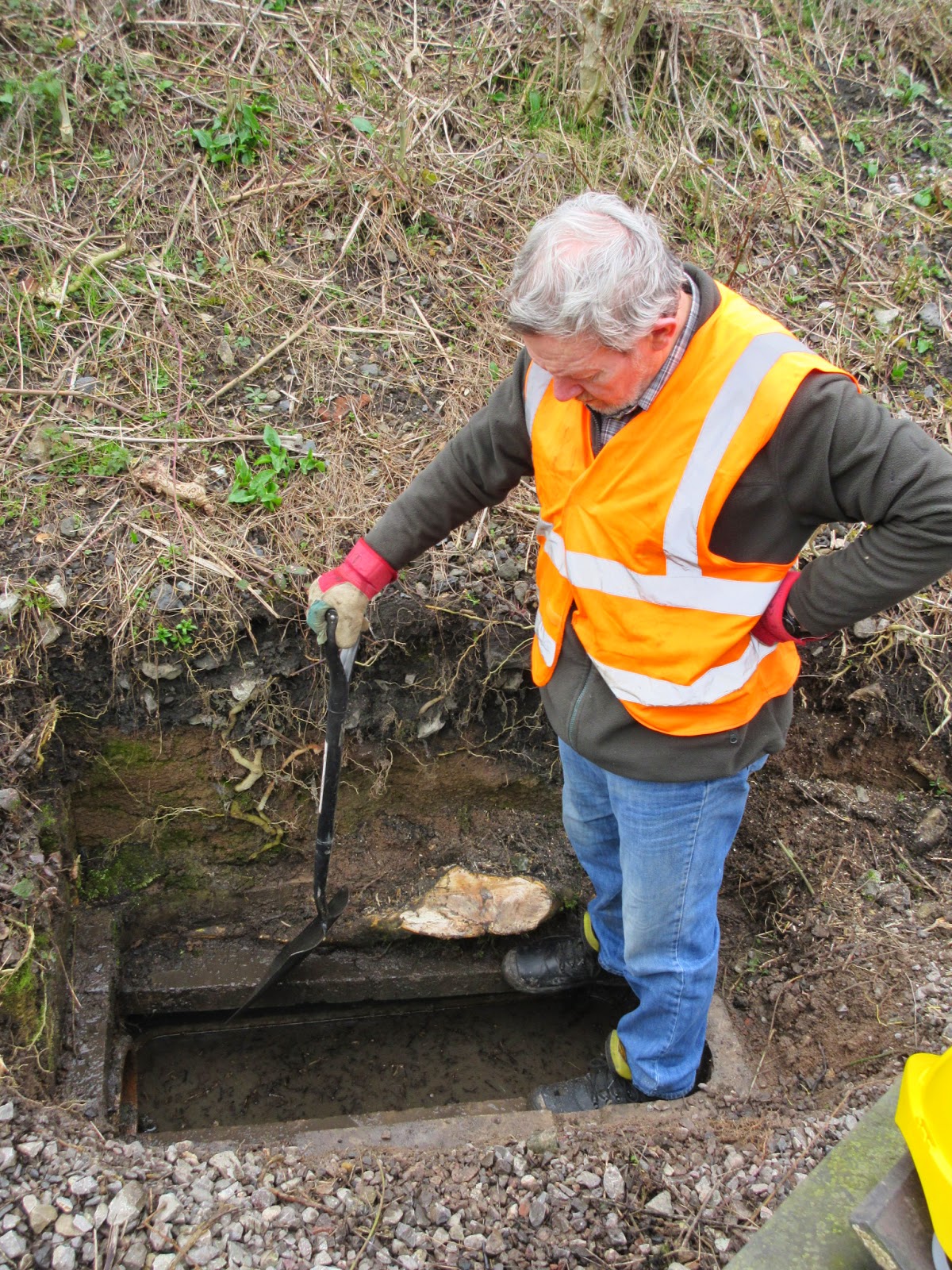 A useful extra report from Rod:

Hi Bill just a brief report on progress. After checking and clearing  out that catch pit I showed you I joined Terry and Steve B at the other end of the site. End of day saw six pits cleared and with water movement, most had been rodded both ways as far as the kit we had allowed. We then temporarily covered each one to keep rubbish out, the one nearest the top fence needs more clearing. Each pit needs at least two more risers to be at full height, some like the one I showed you a lot more. The picture shows a pit that has a french drain let into the side. When Terry and Steve started on it, it was full to the brim with stone which had solidified with years of lime and other minerals that had leached into the pit. A good start but still a lot to do. Cheers Rod 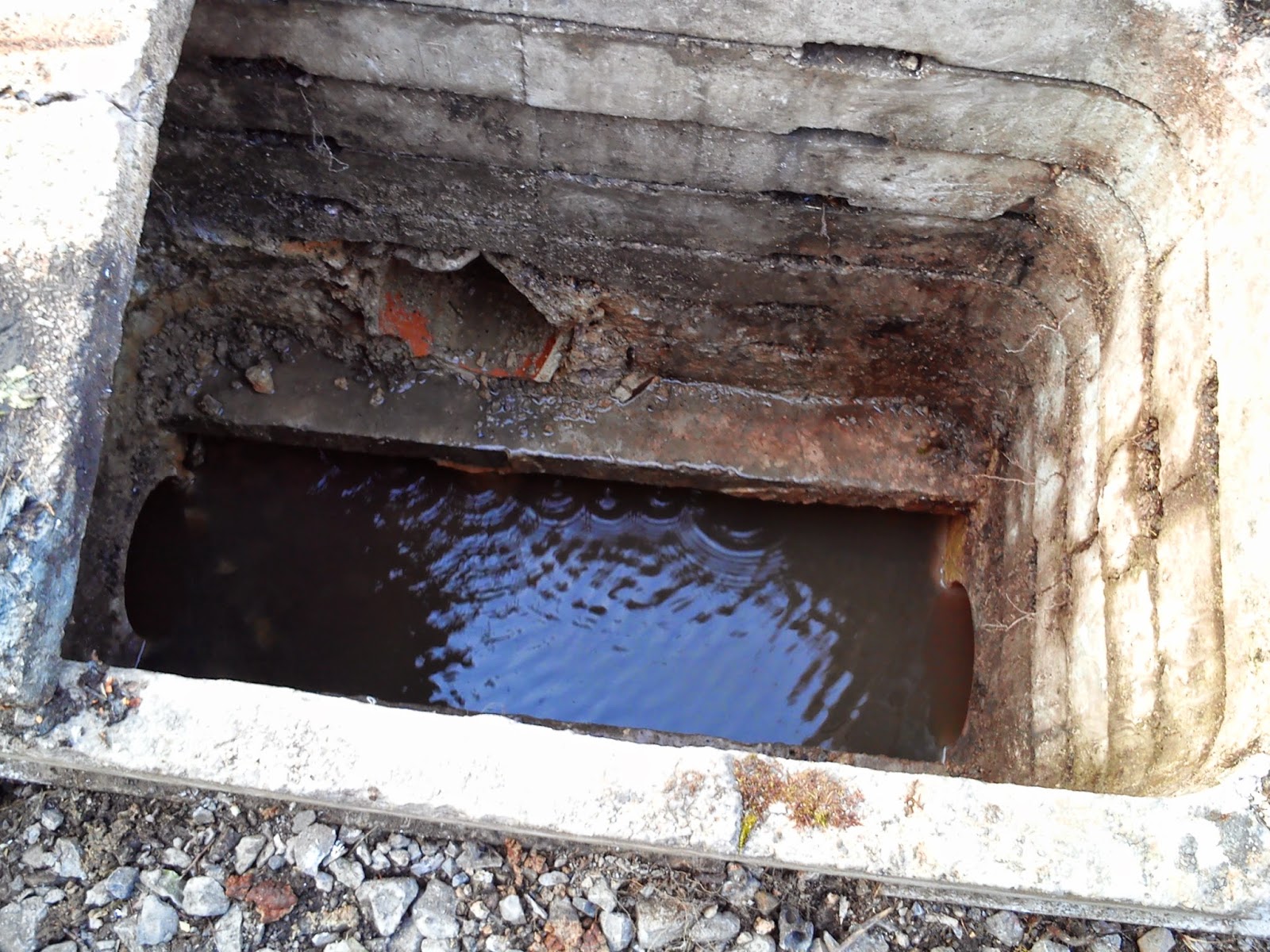 Further up the cutting the collection and burning of the brushwood continues. This seems a never ending job (in many ways it is!). But the chaps stuck to the task and you can see from the photos above just what a difference it makes. 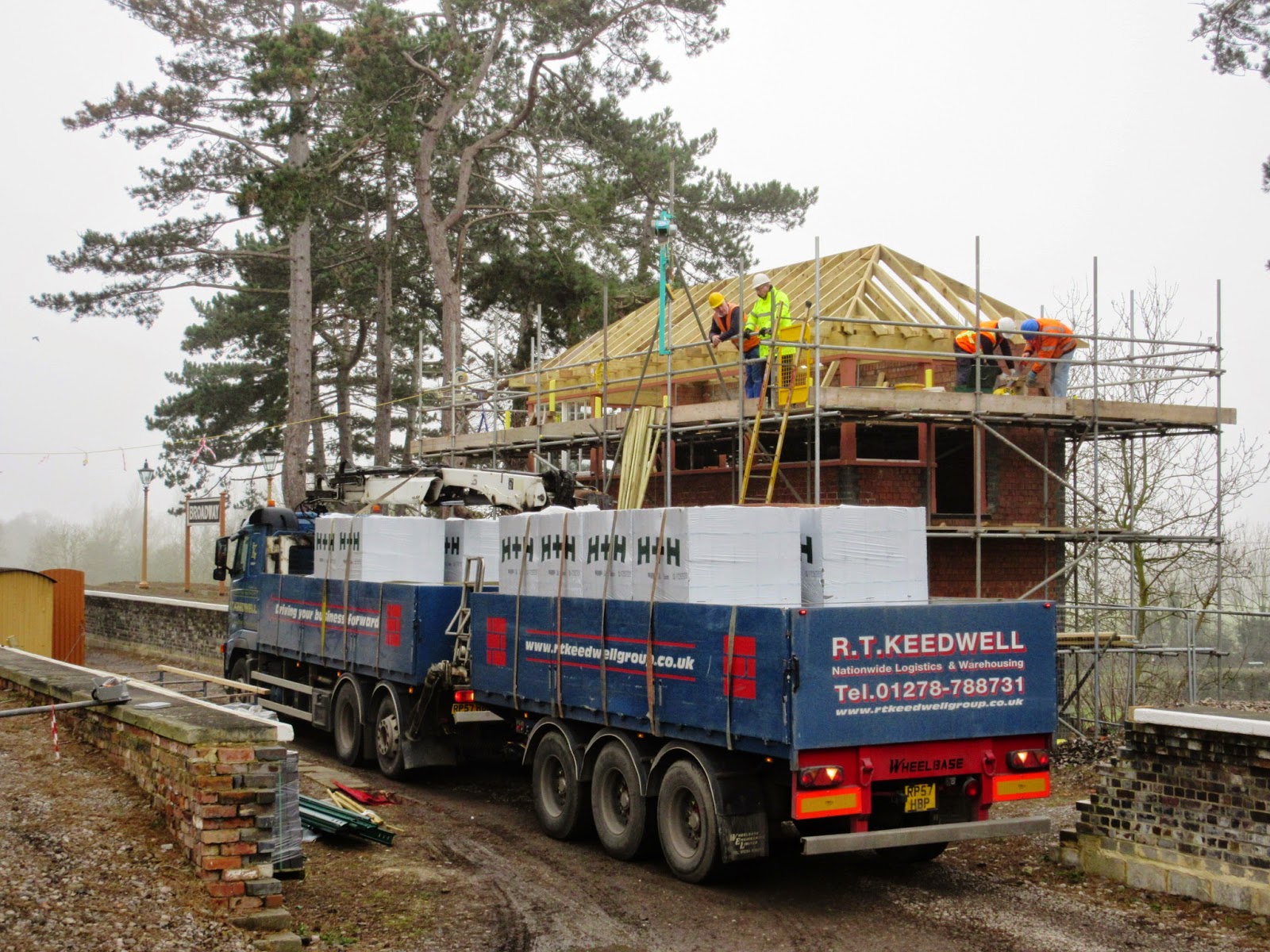 Other things today? Well Celcon delivered a load of blocks for the internal walls of the Station and Waiting Room. When the Signal Box is completed, the main Station will be the next construction project to hand. 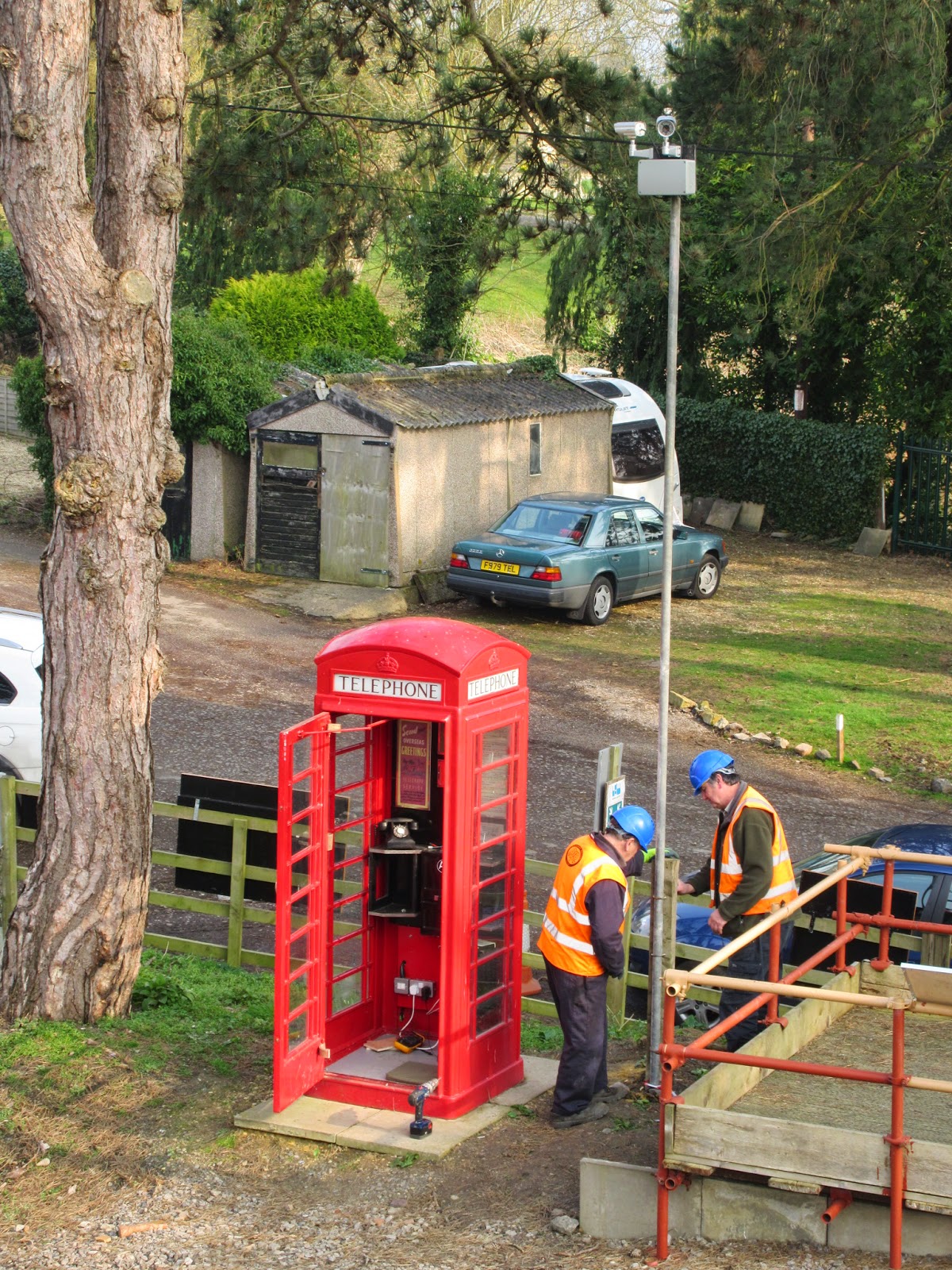 With this in mind the security camera mast needed removing from the footprint of the Station Building and re positioning by telephone kiosk. I know what your going to ask and the answers yes.

Finally we had an interview session with BBC Hereford and Worcester Radio this morning, talking among other things about the Recruitment Fair at the weekend.  The H&W representative was a very pleasant chap, but not as glam. as the Radio Winchcombe lady - this is probably why Jo didn't take any pictures!

Hi Bill
I was surprised to see T&G boards going on the roof - is this how GWR did it? I assume next will come a waterproof membrane, then battens to hang the slates on?
Great progress!

Peter,
Yes this, was the GWR way!