A look out of the bedroom window explained why it seemed so bright when your scribe woke up this morning - there was snow on the ground!

The car park at Broadway was also covered, but it hadn't held many back, there were at least a dozen volunteer cars. The place was abuzz already, with Vic shoveling back fill into a barrow from the Mythe pile, and Tony removing the weather sheet from the newly cast 'Goods shed' foundations half way up the drive. The new 'Goods shed' shop building is expected to arrive in March, when we will return the current building to its owner, and vacate the current site for the construction of the station foundation slab. 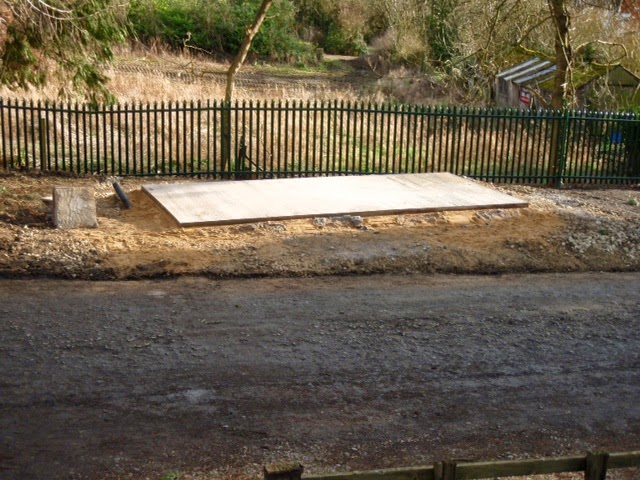 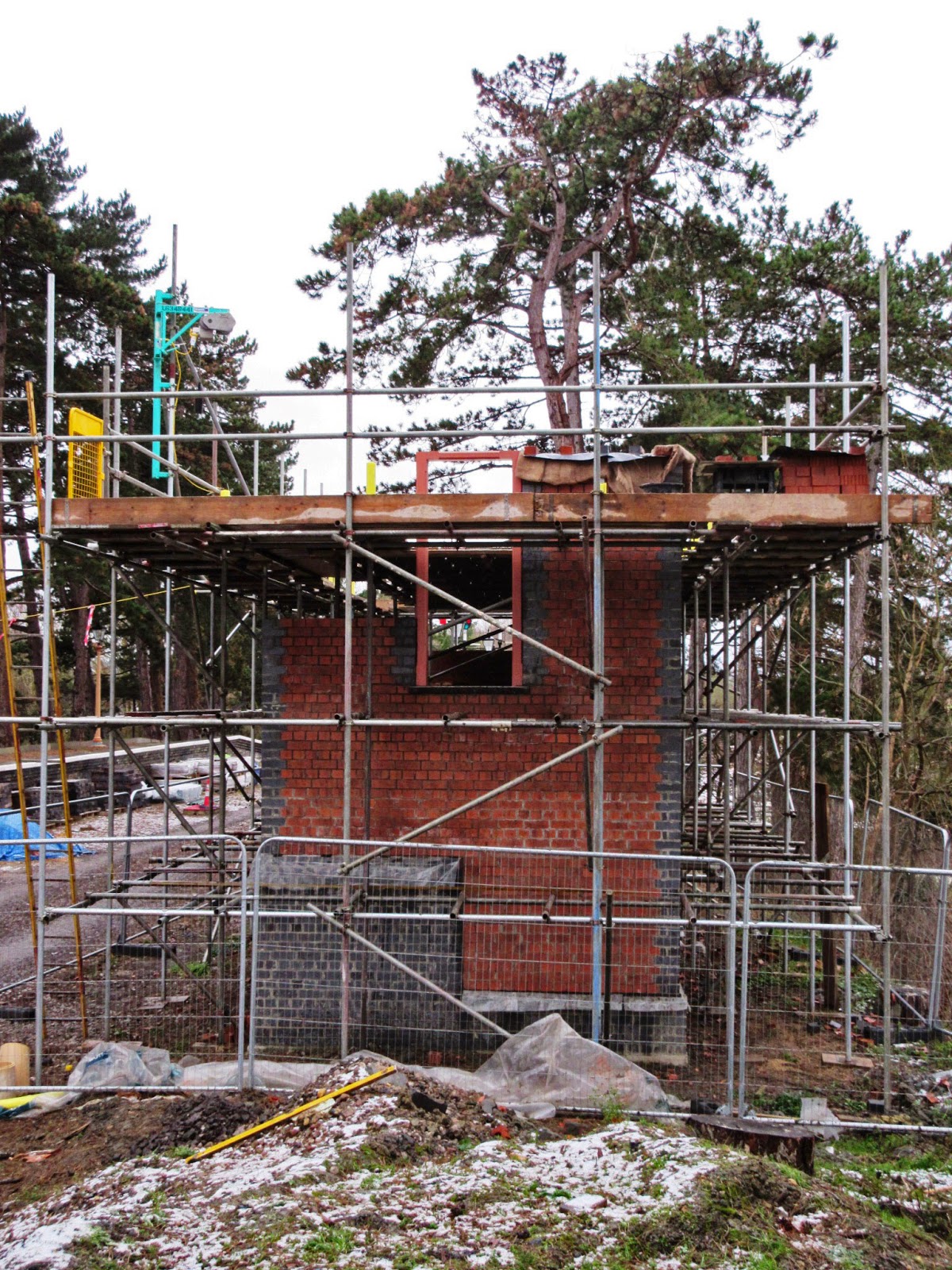 This picture of the box shows from another angle how far we have got - you can see that the corner on the right is now as high as the door, with a much lower bit on the left, where the front is. This lower area is where the big sliding windows will fit in, sitting between solid hardwood frames that support the roof.

News on the window frame front is twofold:

a. A message from our friendly carpenter today was to say that the framework had been completed, and dry assembled in his workshop. It looks massive, we heard! When the brickwork on the rear wall, and its chimney, is completed, we will be ready to accept this frame. Just one or two dry, warm brick laying days to go.

b. Inside the frames go the sliding windows. There are 14 in total, and so far we have 5 brave sponsors who bought a window each, at £250. This willingness to sponsor was one of the reasons we were permitted to build the frames in hardwood instead of PVC, so if you too could help, we would be very grateful. A cheque to the BAG or a donation via 'My Donate' on this blog would do the trick. We need another 9 sponsors.
On the same subject, we are still in need of rollers to support the sliding windows. We have 12, and are looking for another 16. If you know where we can find some more of the GWR originals, do let us know.

Looking at the snow, a large gang decided that making up a fire was the best way to spend the day. 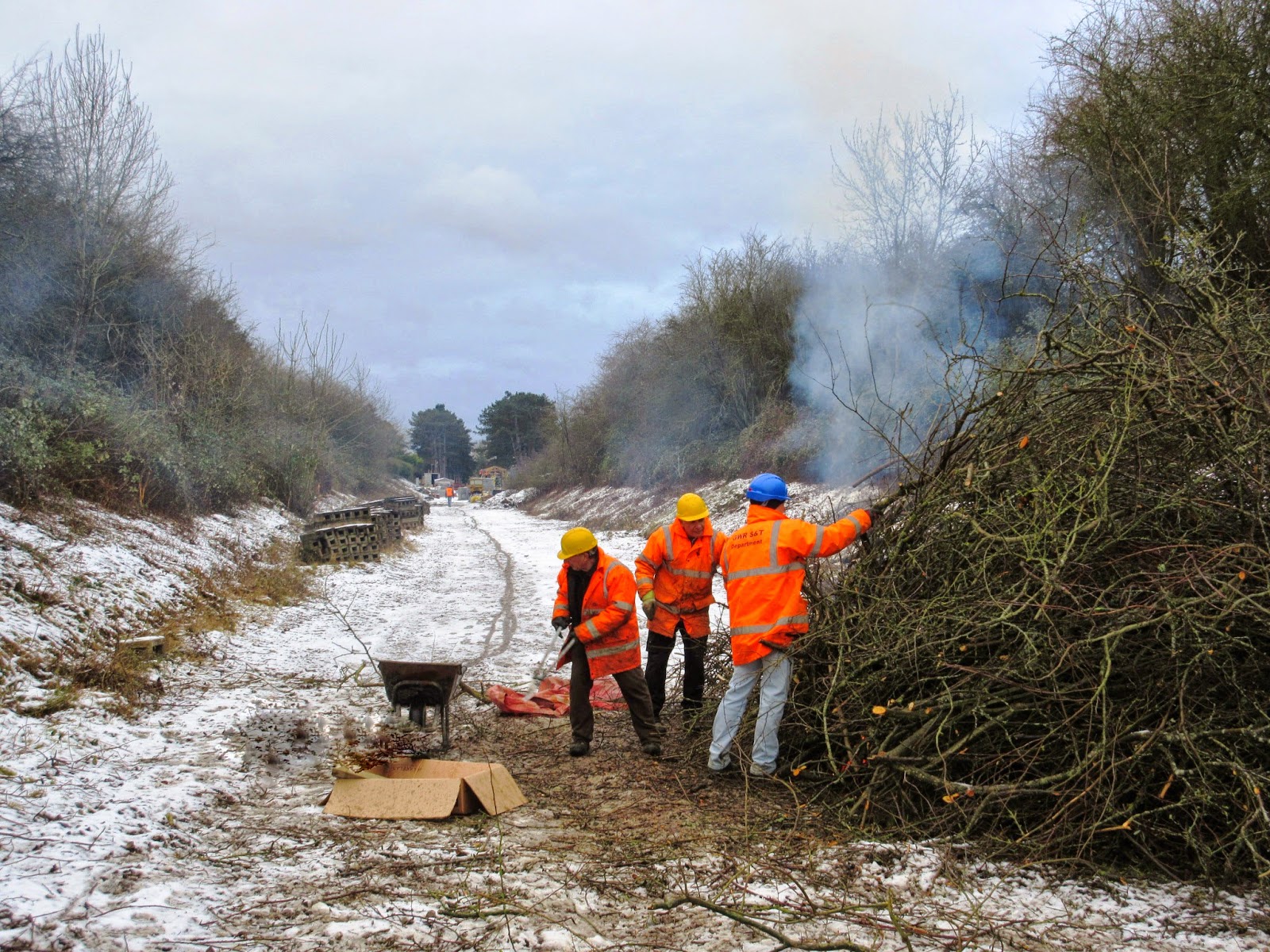 We attacked a huge pile of brash, the result of a clearance exercise at the northwestern boundary. Getting this to start was tricky in the damp conditions, but we managed it, as you can see. 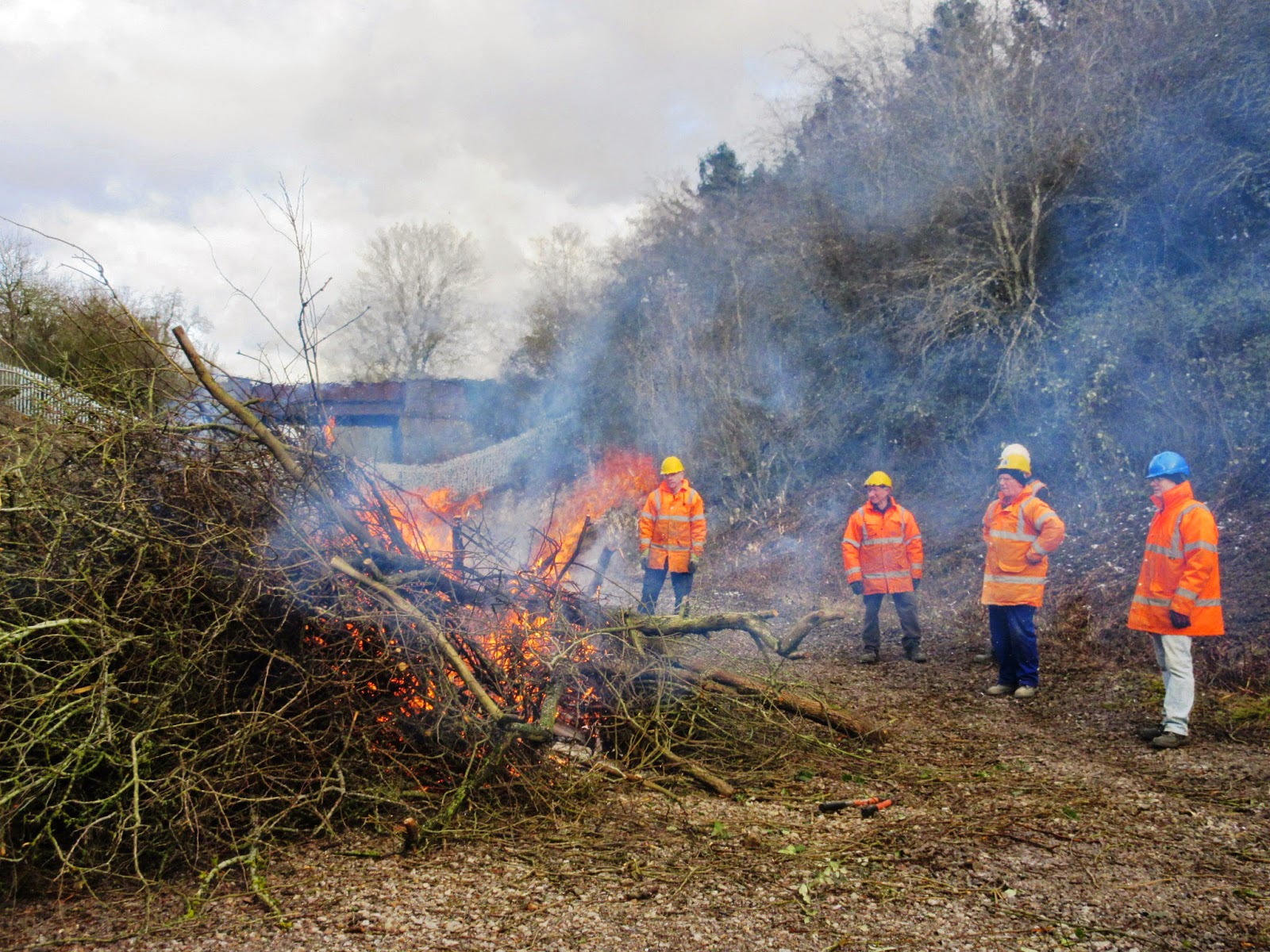 After a while, the fire really took hold and it became so hot that we had to stand several paces back. It was very satisfying to see the bramble burn, especially when your leg has just been scratched to shreds while dragging the brash down the cutting slope. 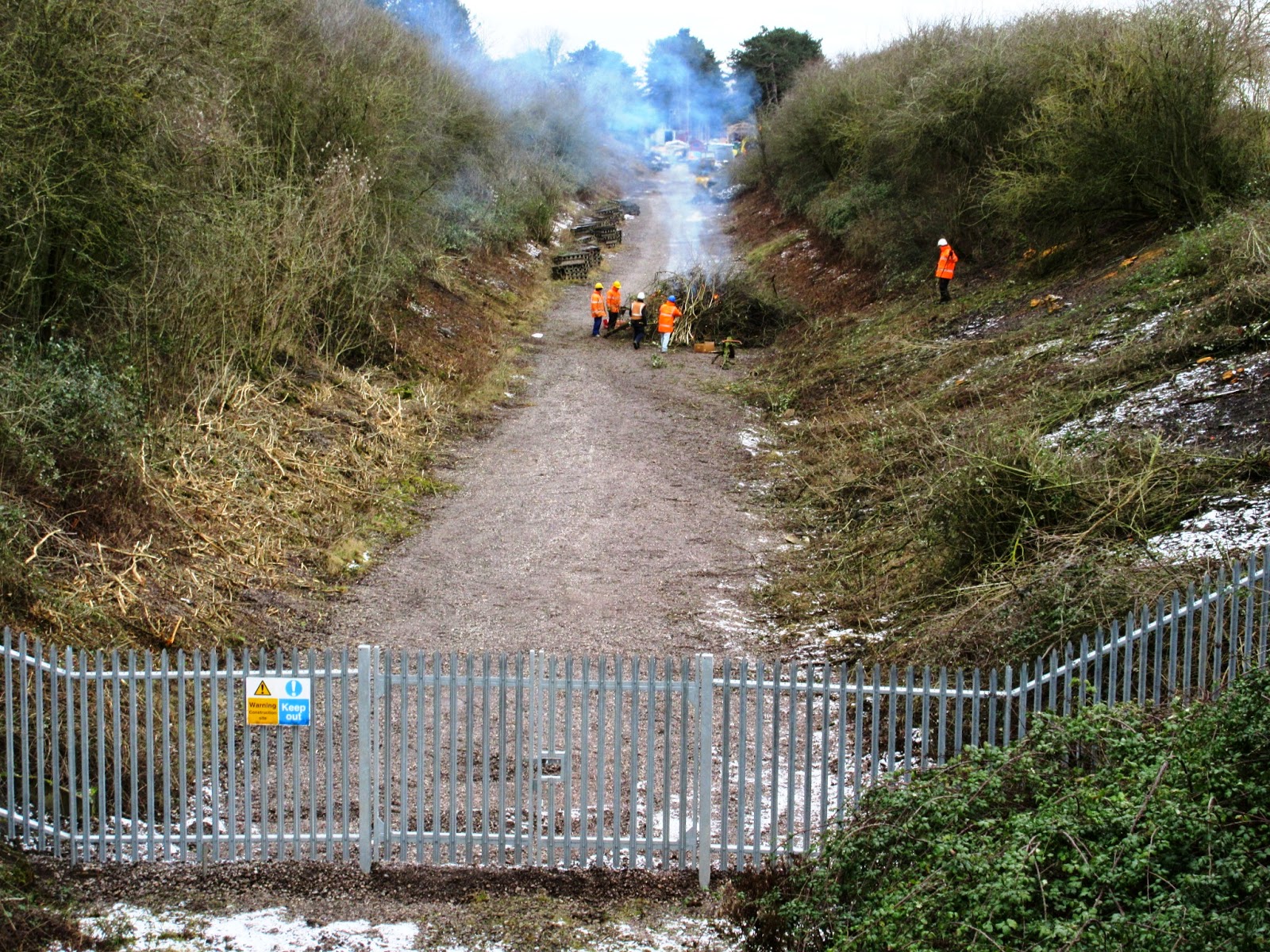 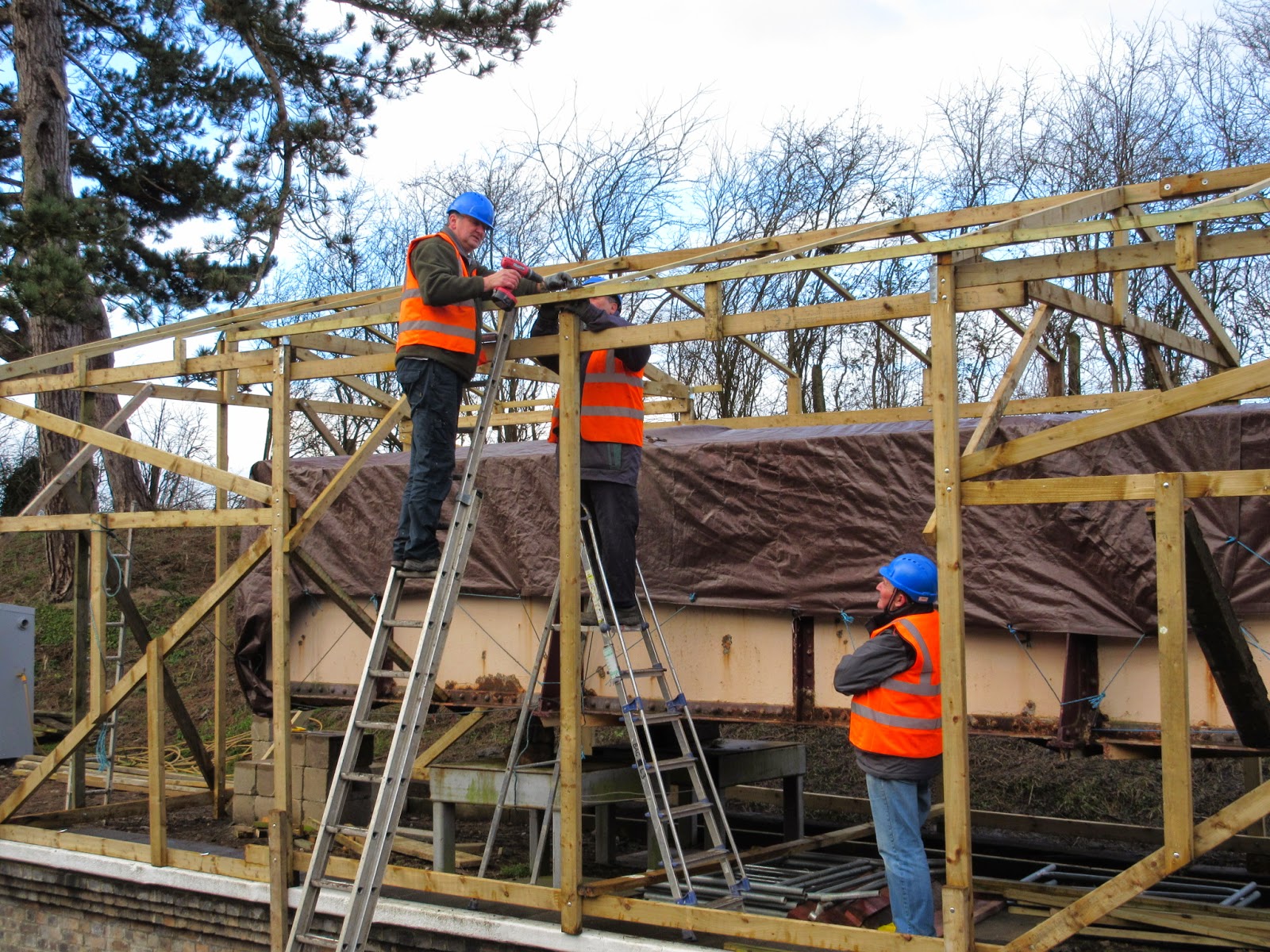 While one gang was getting warm by the fire, a second one continued on the shelter for the footbridge. Dave and Brian here are on top of ladders putting in extra braces for the shed, which, once covered in a sheet, is expected to get quite puffed about by the winds we have been seeing recently, so it has to be strong. Jim has taken a step back and assumed a management role, with his arms crossed. We are in good hands.

Jim reports that additional drawings are being prepared to provide designs for the extra height required for the footbridge to meet new NR minimum height requirements, and also for the smoke hoods to be put back. We believe they were removed after the end of steam, to provide the extra clearance, and as we are running steam engines, we need to put them back..

Once the shelter is up and covered in robust sheeting, we can go out and get quotes from a shotblaster to clean and paint the span. We are also looking for someone to construct the replacement towers, the originals being too far gone to restore. 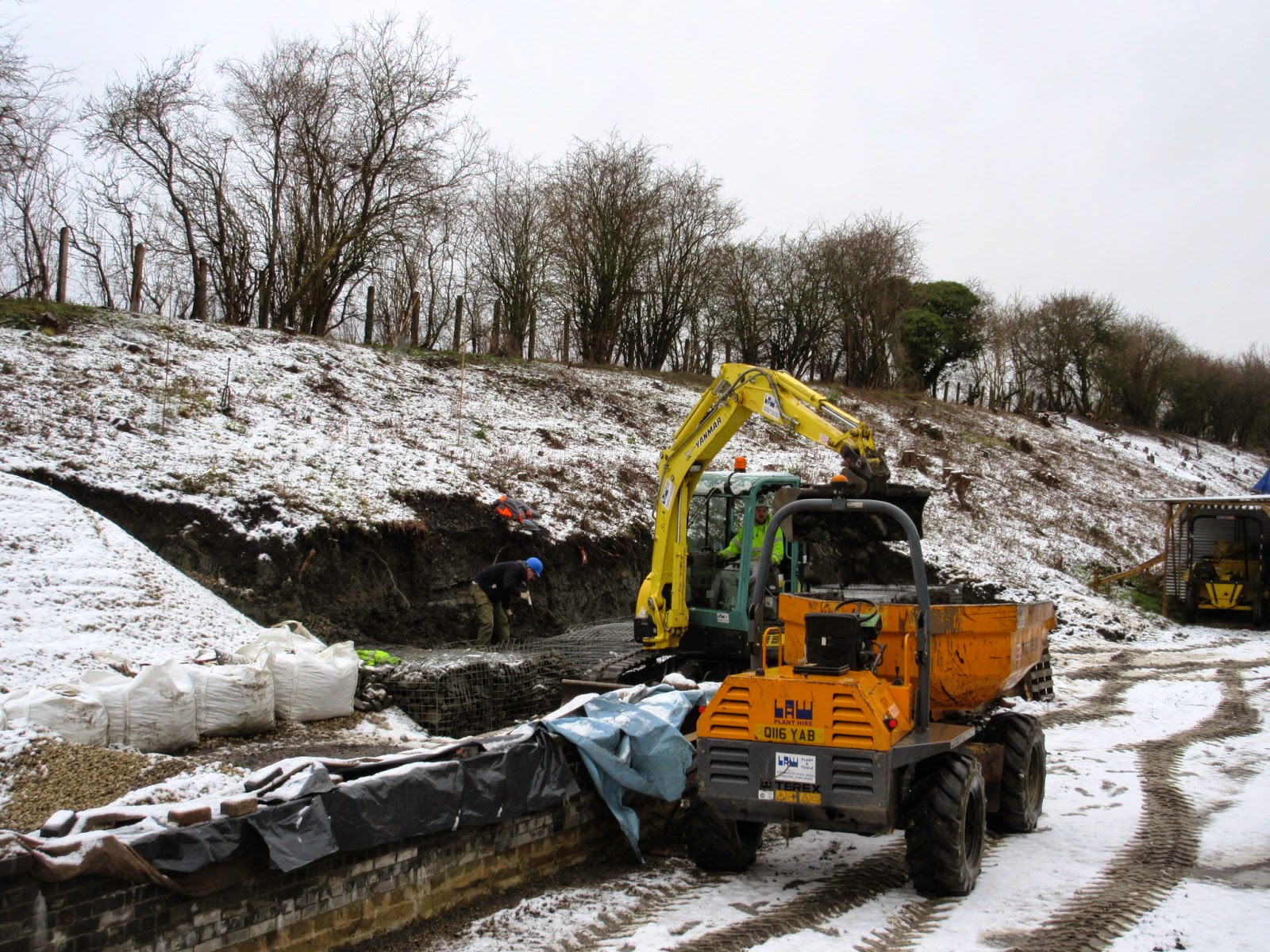 While the volunteers were hard at work, contractors were also on site to address the slip that has occurred behind 2c. Here we see them digging in the gabions. A nice square space had been made for them to go into, but overnight small falls of clay had heaped up on the exact spot they were meant to go, necessitating some hand digging to get them in today. 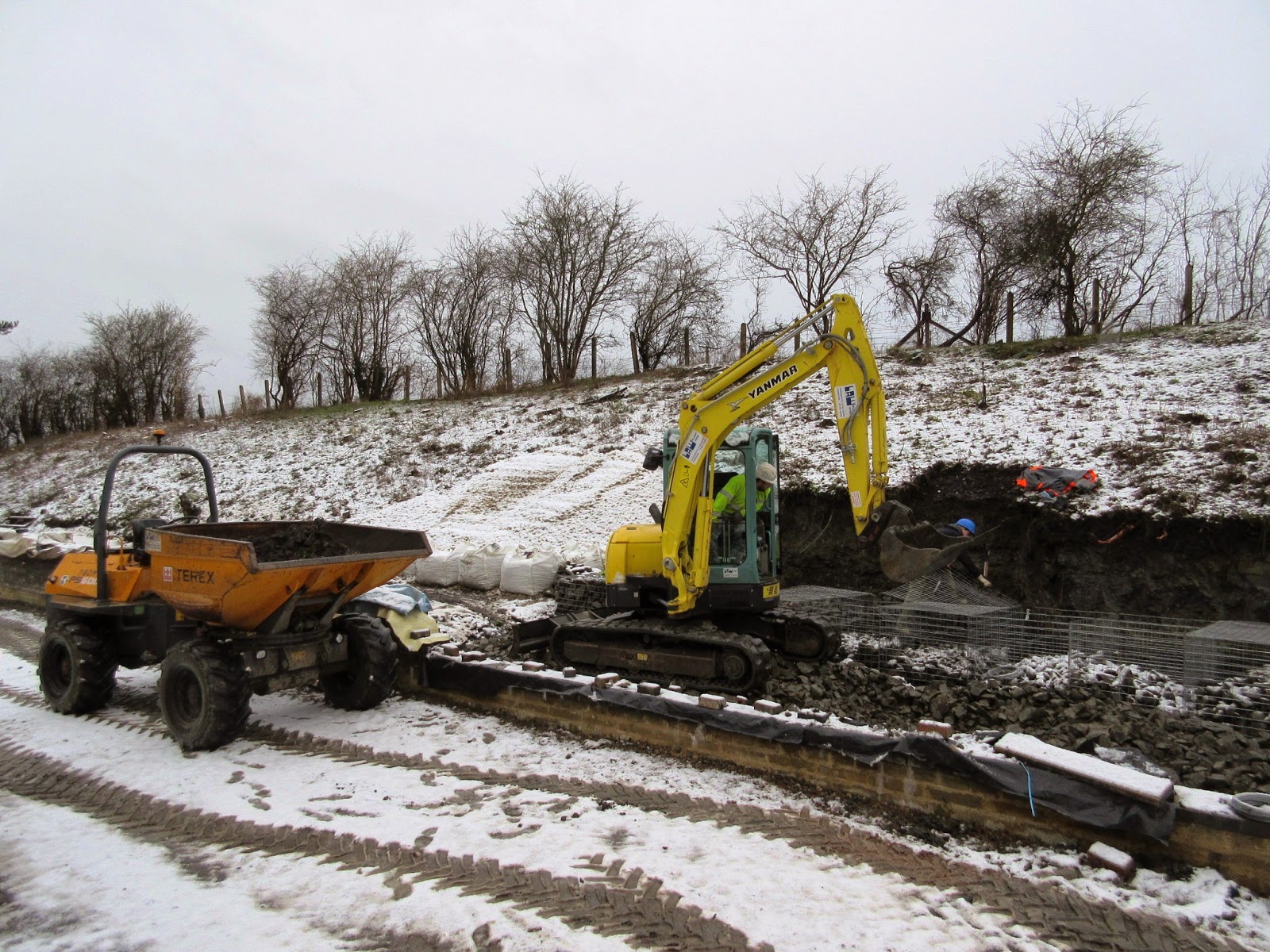 The excavator here is being used to collect and take away the spoil that was being dug out. In the foreground is the northern ramp of 2c, to give you some idea of where this is taking place. And yes, there was lots of slushy snow about, on top of the clay. 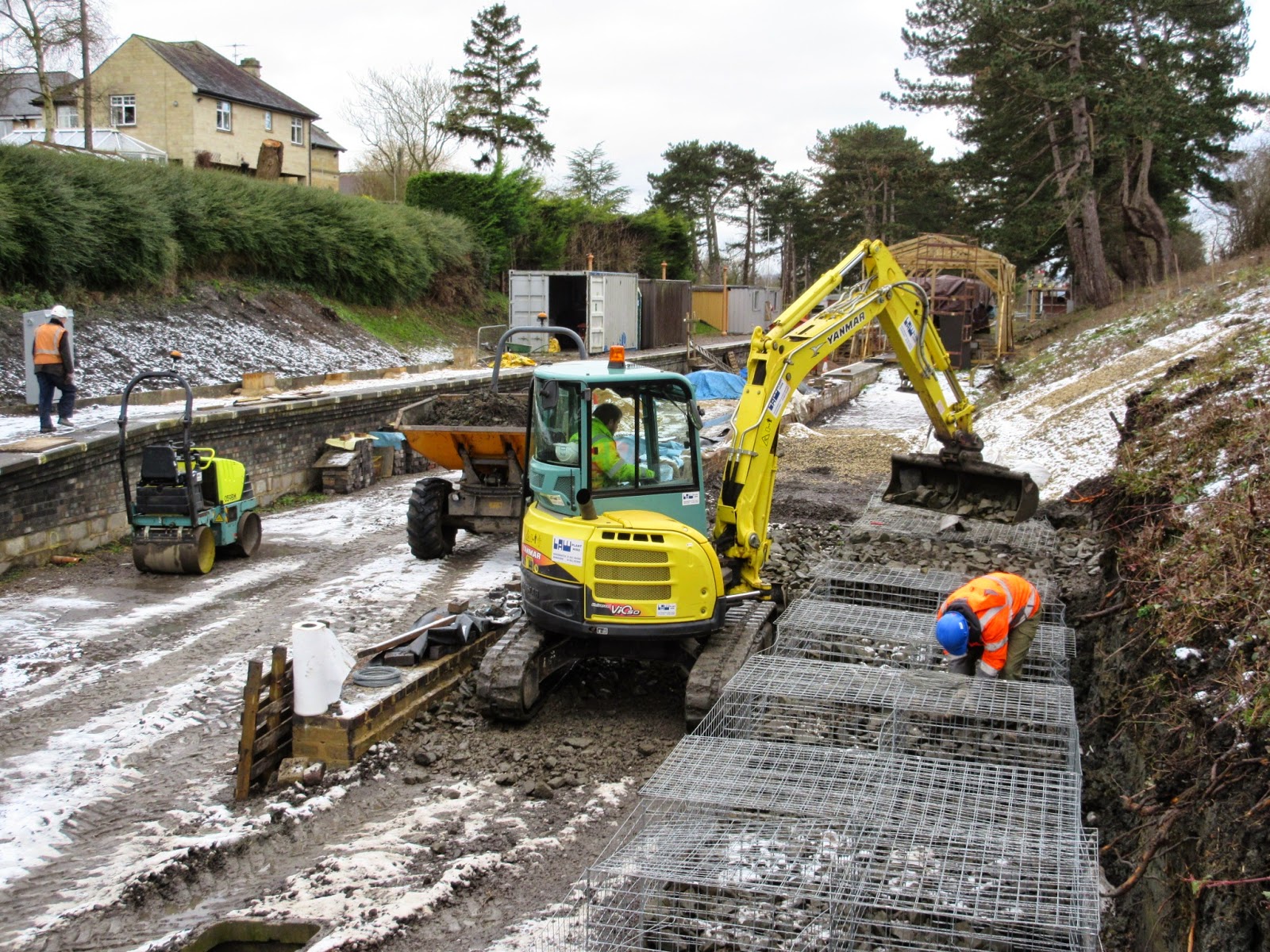 In this last picture later in the day, the contractors have got the row of the gabions in at last, and are filling them in with large diameter hardcore (small rocks). They have already used the piles of Toddington spent ballast dumped underneath the bracket signal, and you can see that the rear of the platform, where the excavator is standing, has been back filled. They will carry on next week.

If you can help with the sliding windows, for the rollers or an offer to sponsor one, do let us know.

I'm good for a window, but what address do I send cheque to, and where do I download a giftaid form.Can't giftaid through Mydonate it appears.
Are you planning to put little plaques on the windows to say who they have been sponsored by? Might be a nice touch.

Why does the bridge need to meet new NR minimum height requirements on a heritage line? Is it that there is a prospect of them renting pathways on our line for freight movements in future say during the week/ overnight if mainline connections at Honeybourne and at Cheltenham is ever re-established?

I DID WONDER IF ANYTHING RAILWAY
HAS BEEN FOUND WHILE CLEARING THE UNDERGROWTH IN THE CUTTINGS.

SPA VALLEY RAILWAY FOUND SOME OLD SIGNAL BLADES ONCE WHEN CLEARING THEIR EMBANKMENTS.

Yewsterday, half a cup marked 'BTC' (British Transport Commission) and of course on the Broadway station site itself, a finial, two crush barrier posts (we are looking for two more), a modesty screen post, and the remains of the platform 2 lower footbridge supports. Otherwise, lots of small items like signal pulley wheels, rodding, GWR chairs, a bit of lightweight contractor's rail etc etc.

The guidance we have received from the ORR is that we should comply with Railway Safety Publication 5. This document sets the standards required for new and altered railway works. Unfortunately our footbridge, although removed from it's original site is classed as a new build once it is erected on a new site. The drawings we have obtained of the original footbridge clearly show that it didn't meet the structure gauge as originally built, which is probably why the smoke shields were removed at Henley in Arden.

I'm curious about the smoke hoods, about which I couldn't find anything in a quick online search. I can guess more or less what they are, but is it possible to provide some details of what the ones which will be added to the Broadway footbridge will be? Thanks!

To Barry,
We are looking into the gift aid angle and will revert to you.
Can you send me an email to breva2011(at)hotmail.co.uk ?

Re the plaques we don't think this is an idea, as they will be largely hidden from the public. However, we would be happy to give you a personal guided tour of the box at any time. If you can climb a ladder, it could be as soon as you like.
Many thanks for your offer of help !

How about setting up a dedicated mydonate page just for the windows, similar to the one you created for the Signal Bracket? That way the target of £2250 is smaller, and people who, like me, can only make a smaller donation would have a realistic target.

Loving your work, by the way.

A link to The ORR structure clearance document. I hope it works.

I note the requirement to carry ot derailment assessment and protection works too.

To Eric,
You can contribute to the windows via the station My Donate site. In the end, the money does go to the railway. Just tell us what you did, and we will earmark it for the fund. We already have one other, smaller donation from someone like you. It's just that a small group approached us to say that if you can guarantee the windows will be made of hardwood, we will sponsor 5 of them, that's how it started. If it wasn't for them, we might well have had PVC.

OK, donated via the mydonate page, although I wasn't able to select GiftAid as an option. Perhaps you can do this retrospectively?

Hi, I visited this under - construction railway about 3 years ago!! I love how much work has been done since but there is one thing I want to ask and that is do you have a date of finishing time, tho I can't wait I'm so exited to see wonderful steam trains running again in this beautiful scenes area with the countryside, you're next to a camp site right?? so you may get some tourists!! on a day out. and what happened to the Broadway goods shed is it still part of GWR, could we see it sheltering trains or cars form rain please tell me, ty good luck:)

Thank you Eric ! We can't wait to see the carpentry arrive ! Your help is really appreciated.