A day of two halves! 12 volunteers were on site in the morning and then everyone donned their best bib and tucker to go to the GWSR Volunteers Meeting at Toddington Village Hall. 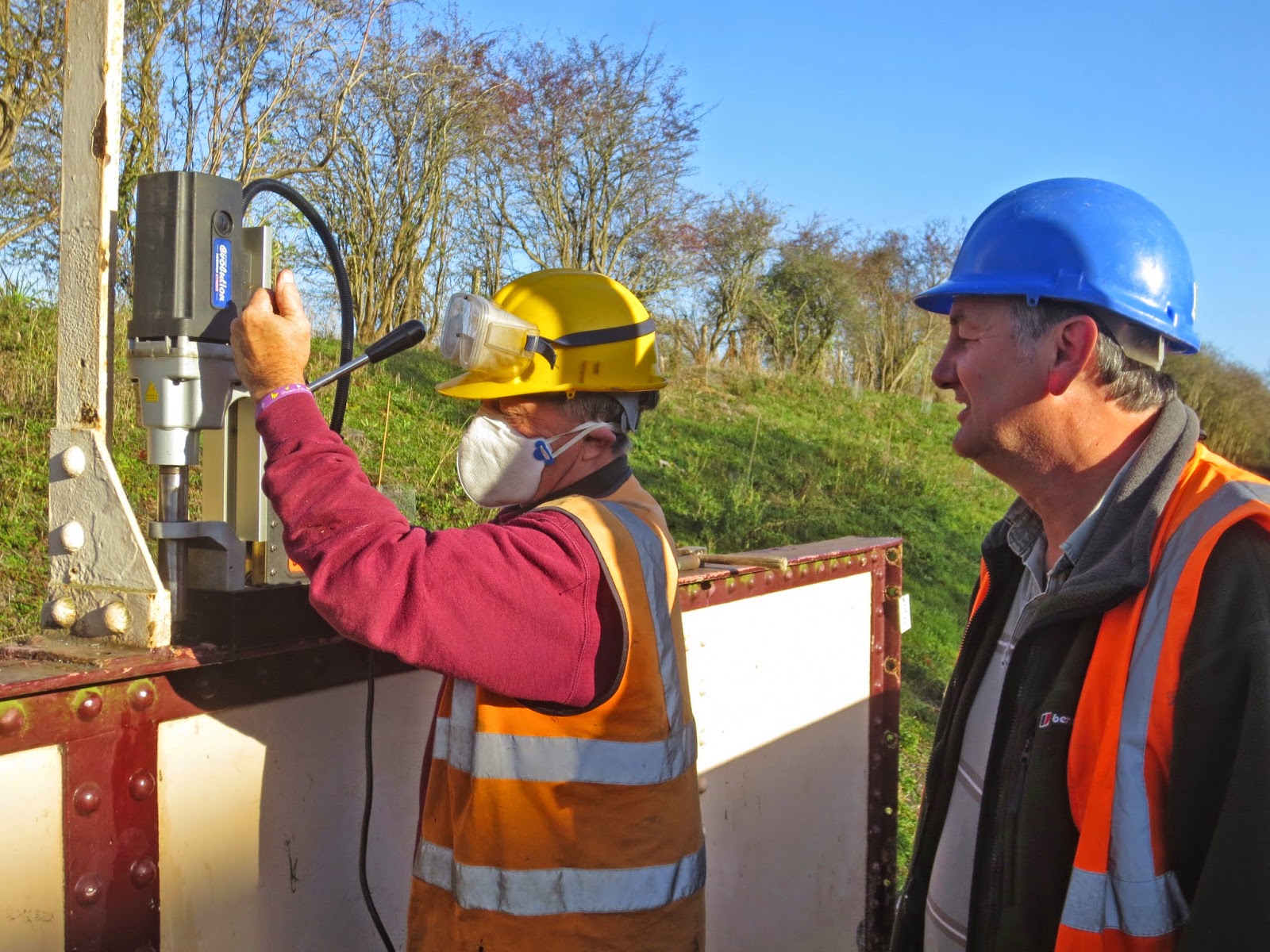 Perhaps the most interesting activity of the morning from an engineering point  of  view was the drilling out of the old rivet stems from the brackets that retained the hoops on the footbridge. Steve B having ground the heads off on Wednesday was able to bore out the stems. An excellent bit of kit, borrowed from S&T, did the job in, what seemed, no time at all. 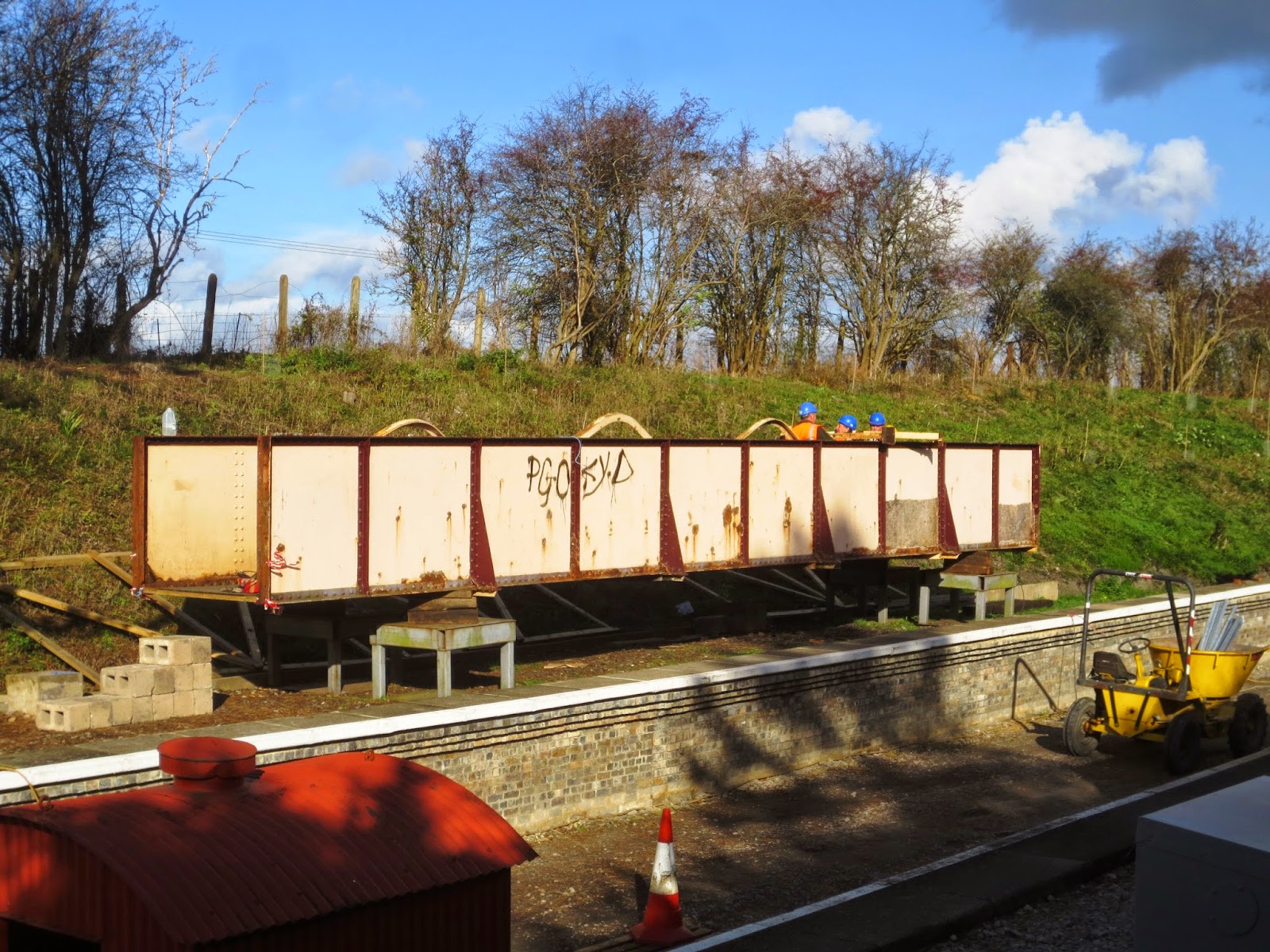 And there they were gone - or at least removed from their positions and resting in the bridge. 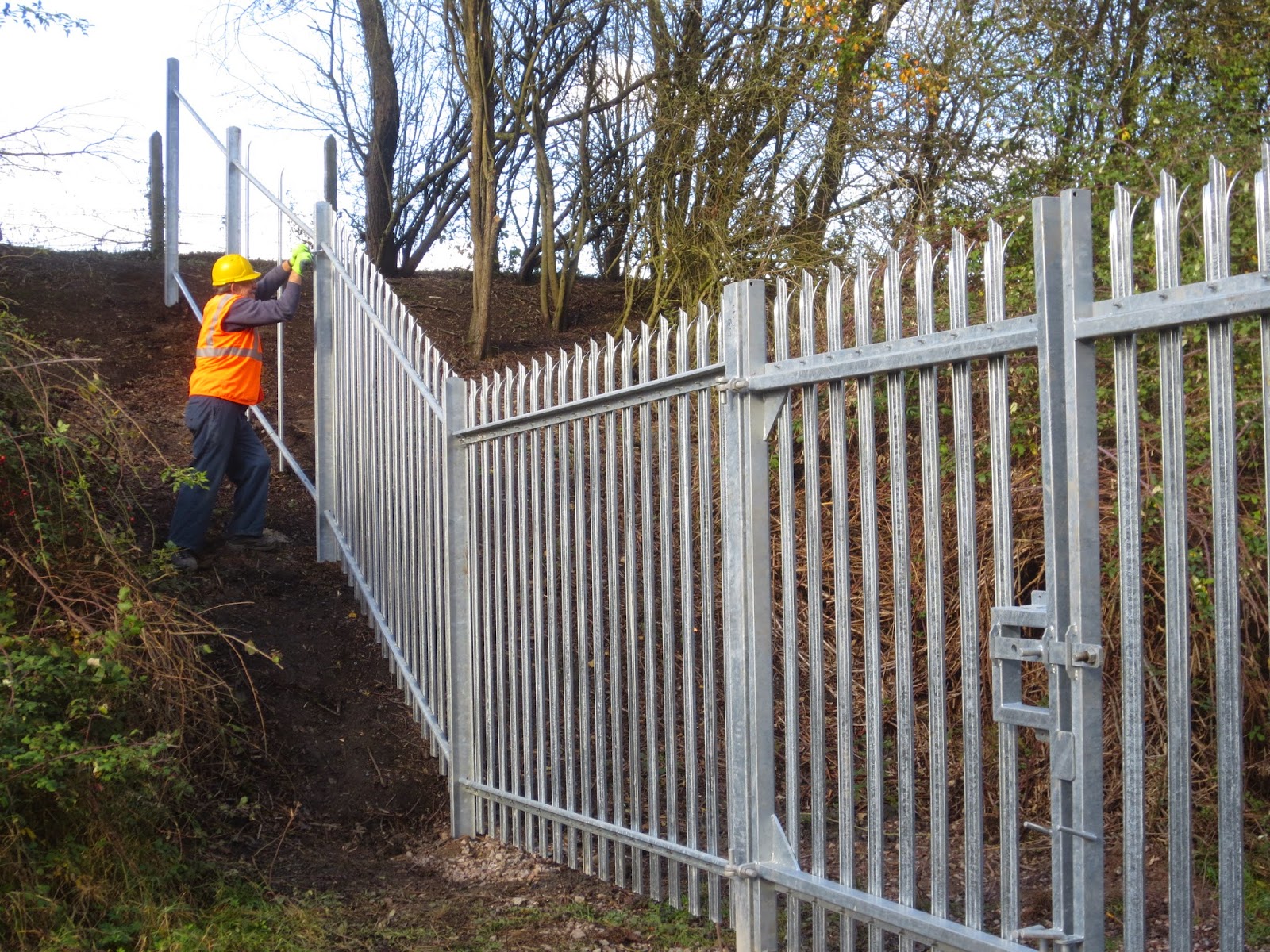 At the northern end of the site, work continue on erecting the northern boundary fence. Its coming along nicely and should be finished by the end of next week. 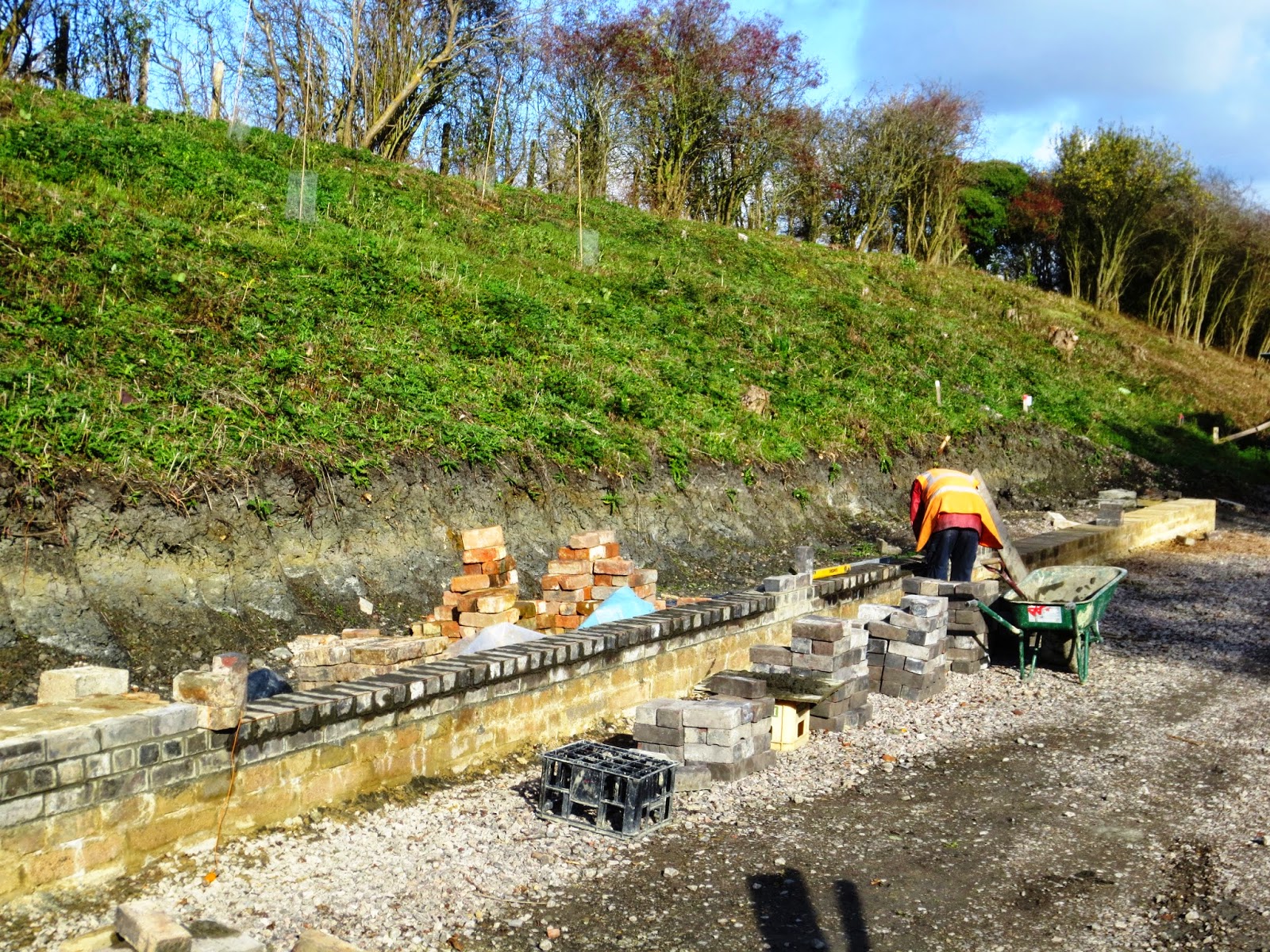 Clive cut a lonely figure on Platform 2C - laying a good course of headers. he should be happy enough knowing that the Blues were at least going to manage a draw!

Roger H and Robin continued on the brick cleaning - some blues were recovered by George Law on Wednesday and they kindly dropped them off for us. They instantly got cleaned and piled ready for use.

In the afternoon it was the the GWSR Volunteers Meeting at Toddington Village Hall. Not a venue I have been to before - but its a very pleasant venue with lots of space. The theme of the presentation by the Directors was an assessment of the year to date  and what the Railway should be looking to achieve next year. Some time was spent analysing the passenger numbers across the various special event during the year. The special events really make the difference between an operating profit and a loss. It is often difficult for the event organisers to find sufficient staff to run these events. It's important that all departments rise to the challenge of helping to man these events, not least the Broadway Area Group.

The Broadway Area Group  had been offered some bits and pieces of  GWR Railwayana.
A couple of words of explanation from Jo:

3 firing tools left to us by Ray Powell, a former fireman at Gloucester and one of the founder members of the GWSR many years ago. 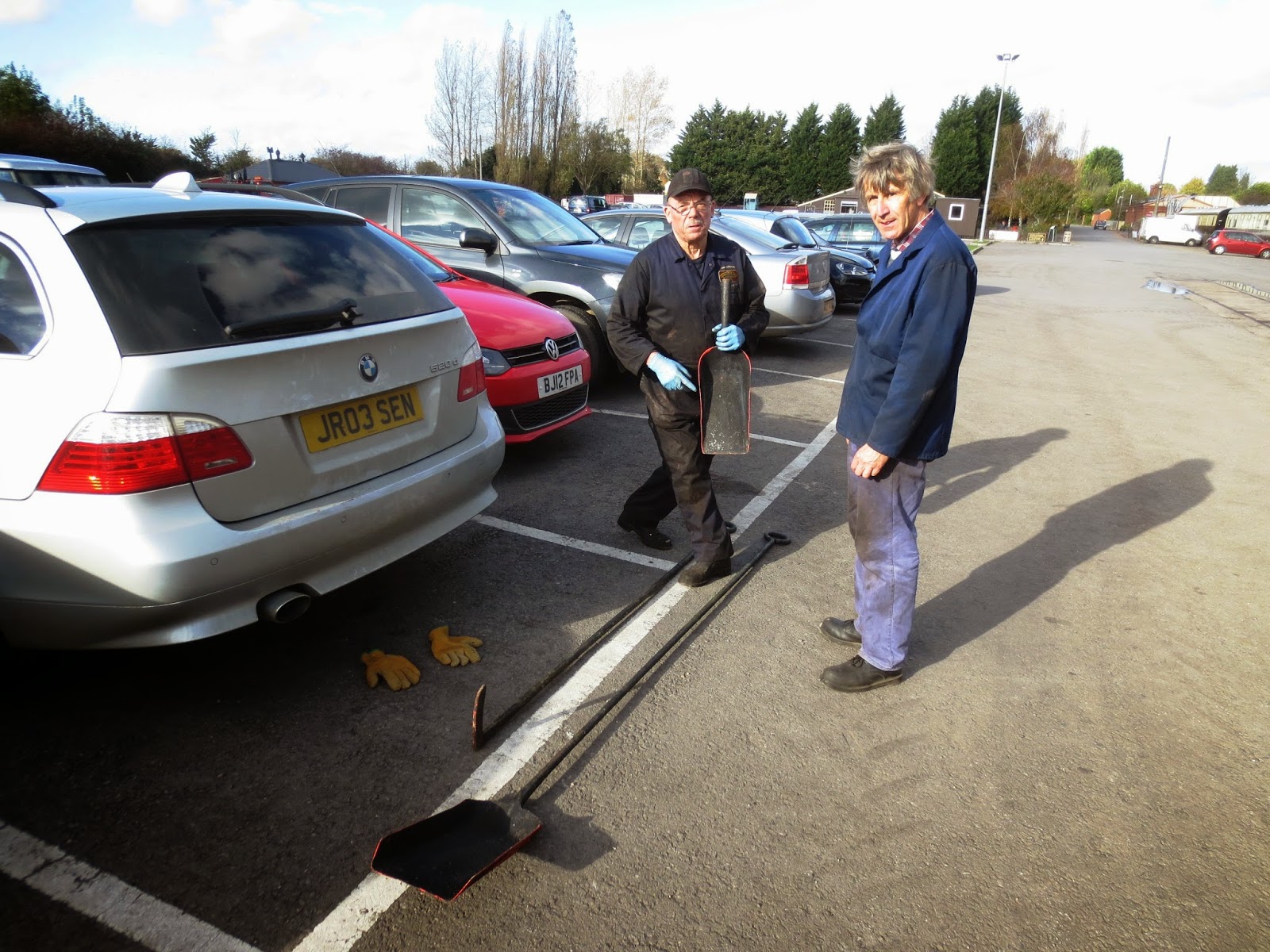 I took them down to Toddington (with some difficulty, as they are jolly long) and the people there were so grateful, I decided to go back and get another, damaged one, in which they also expressed interest. We were also given three metal trunks (for putting on a platform trolley) some GWR glassware and a tickets sign for the Broadway booking office, which I will  have copied. We still need the IN and OUT signs.

You forgot to mention the Fish & Chip specials :-)

Are there still such Relics as the 'in' and 'out' signs on old stations like Henley in Arden?... You could borrow and copy

No update on the signal box brickwork?

Speaking of Signal Boxes, I'm not sure if there's anything left of any use in it but South Brent Signal Box is due to be demolished this coming Saturday. BAM should be doing the 'unfortunate' work. Thanks for the regular updates, fantastic progress so far! Will there be a separate 'group' as it were set up for the station bridge / what is the plan for it?

I definitely hope that all the good bridge work doesn’t suffer the same fate as this > http://www.dunfermlinepress.com/news/dunfermline/articles/2014/10/28/513914-bridge-crash-network-rail-to-inspect-bridge-condition-after-rosyth-lorry-becomes-lodged-underneath/