There were 12 of us on site today, and a long to-do list! 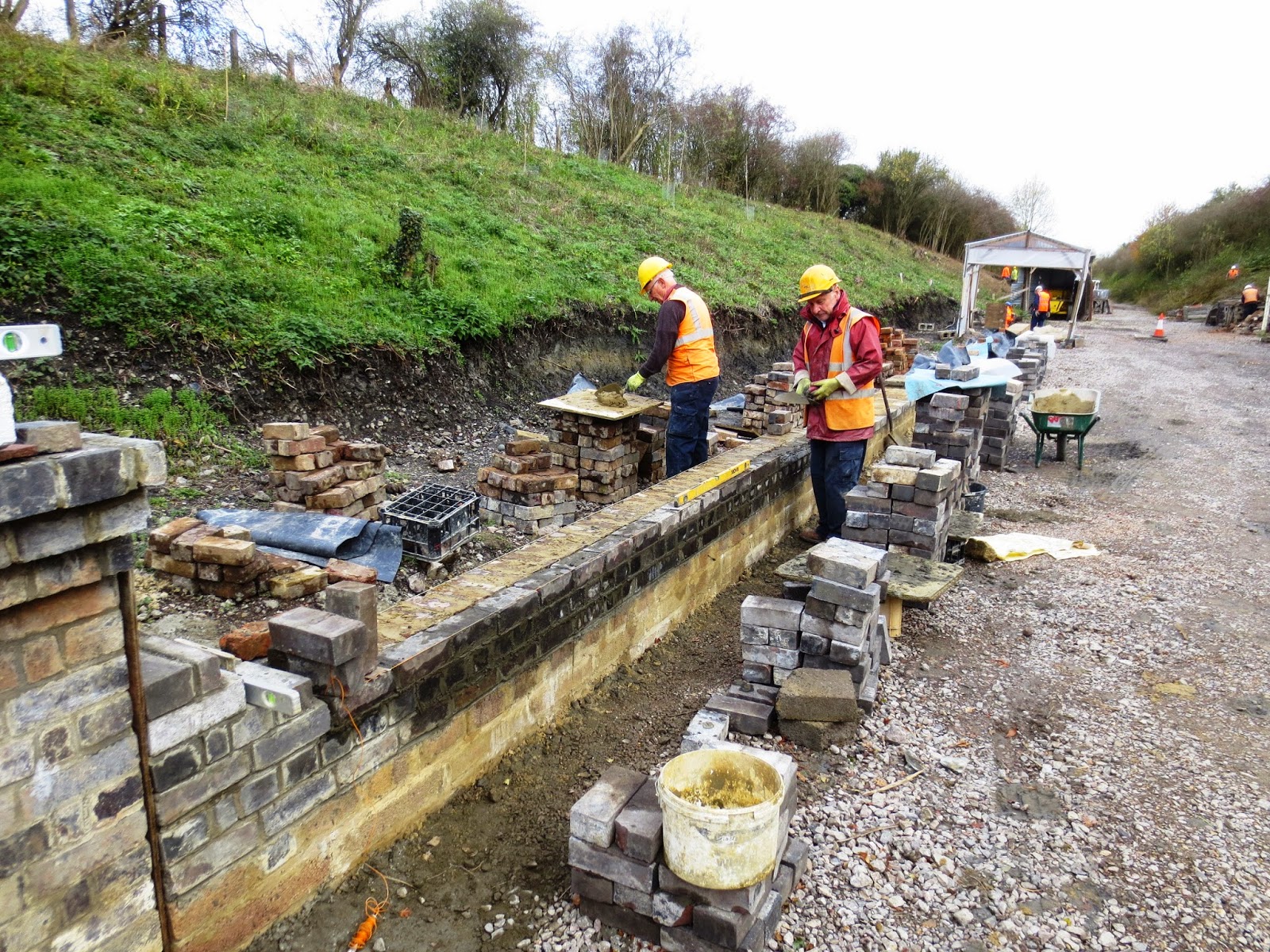 Work continued on platform 2C  with Clive and Tony laying 2 courses of blues and reds on the first stretch and made a start on the next. Weather permitting we stand a good chance of getting this completed by Christmas, I hope I haven't just wished 3 month of frost on Broadway! Talking of Blues -
Clive who I think is a Blues supporter was better off with us today -
Birmingham 0 Bournemouth 8  -what a thrashing! 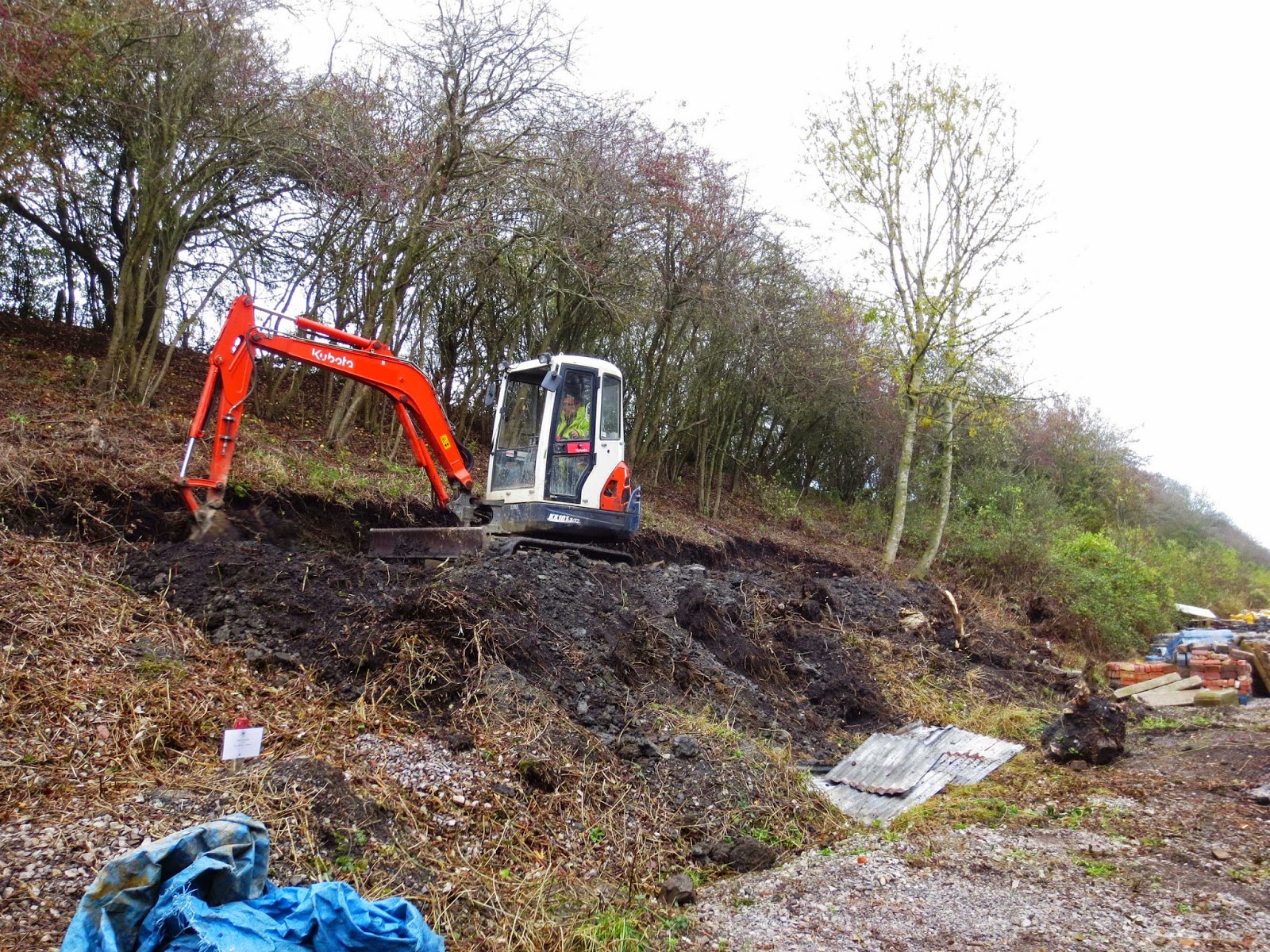 Further up the track bed preparations were in progress for bringing  the 2 HIA Footbridge Towers down from Wishaw. We will probably renew these towers, but we need the originals to ensure that everything will line up properly. We have positioned them well out of the way on a neat shelf on the embankment. Steve Warren did a remarkable job of creating the shelf in no time at all. We are planning to get the towers down from Wishaw in the next couple of weeks. 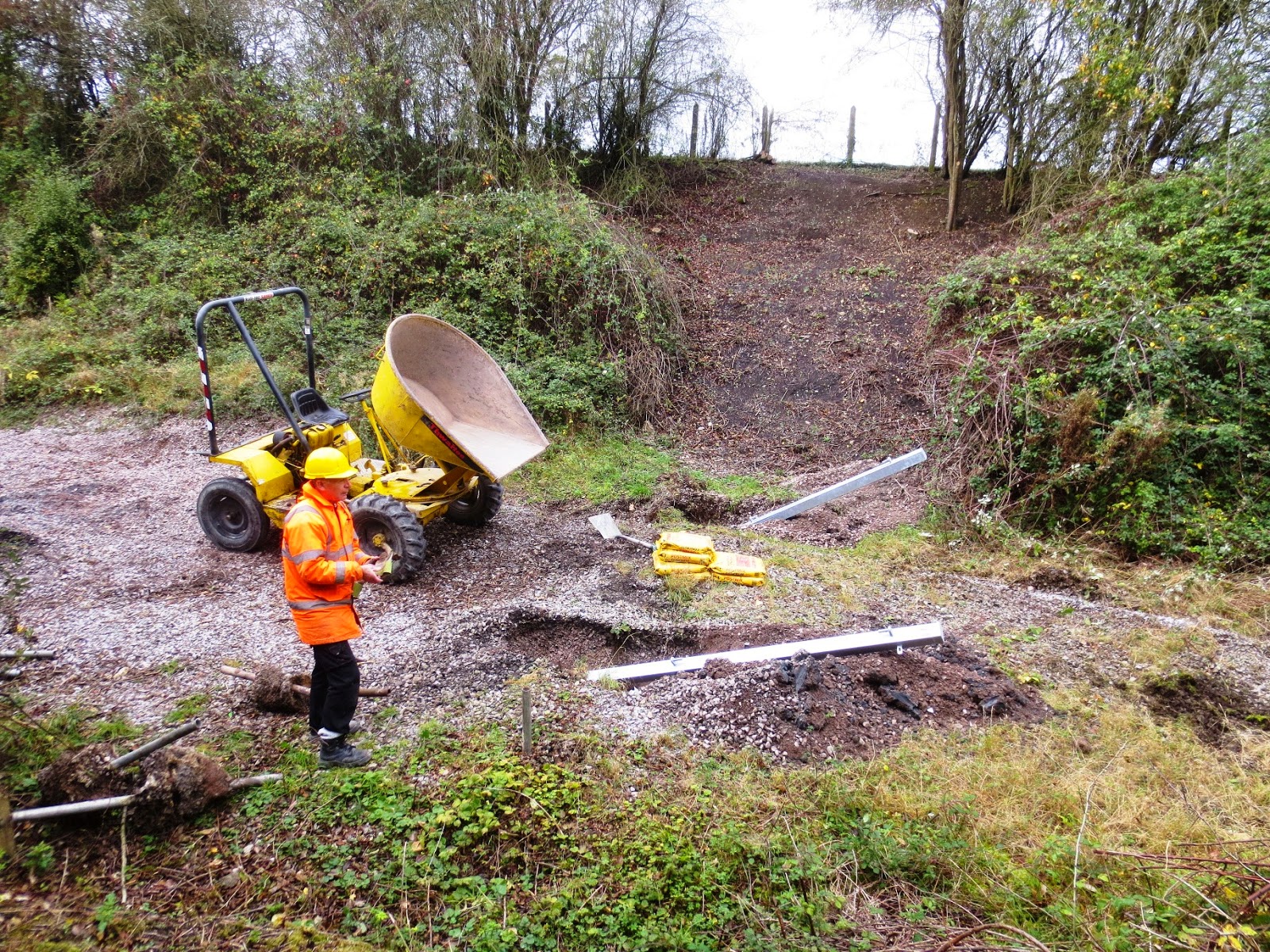 Steve then moved on further north to help Dave B place 2 gate posts on the northern boundary. A small but perfectly formed team were then able to get the posts upright and concreted in, readyness for the fencing to be installed up either embankment next week. 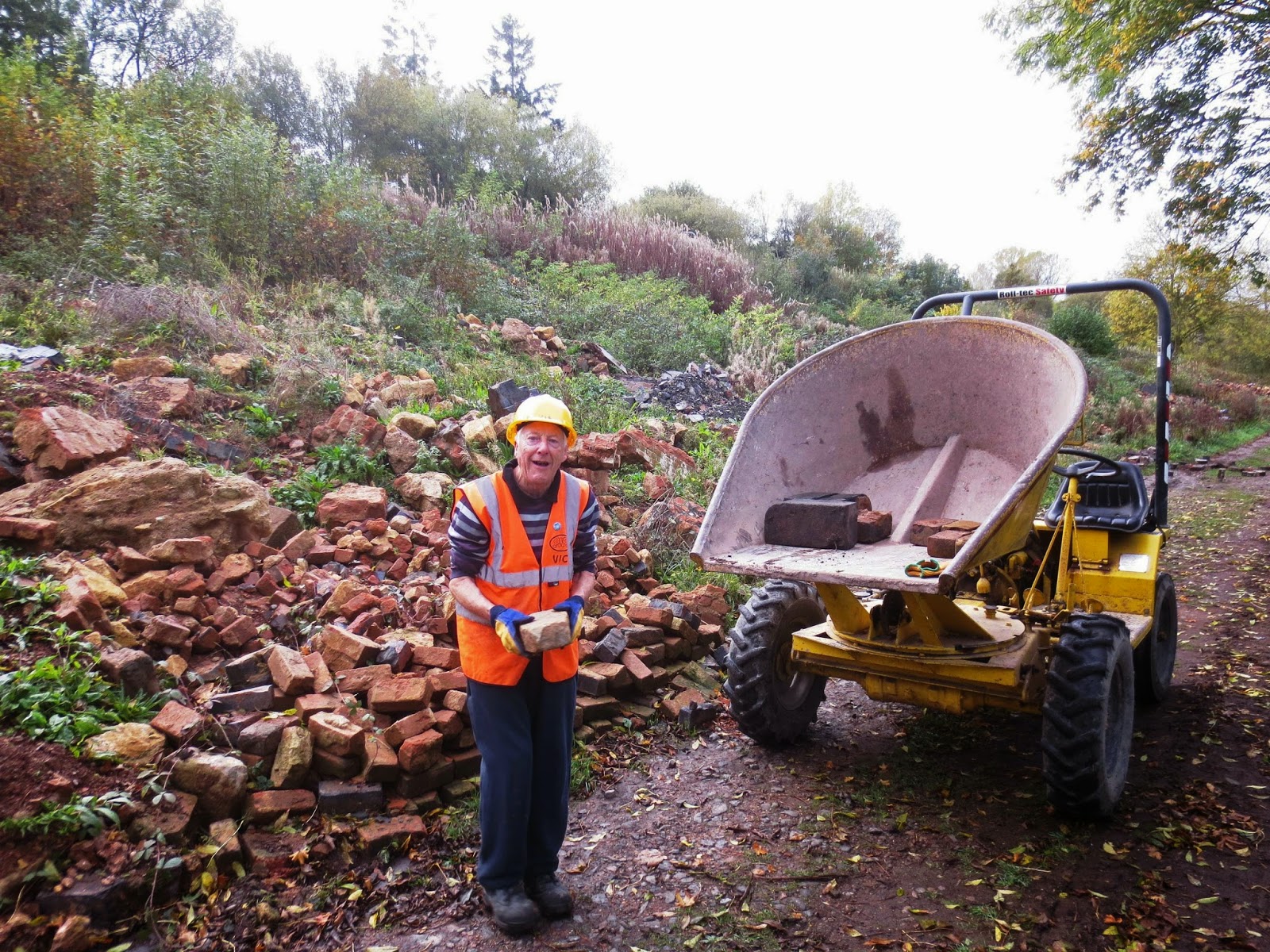 We like to get value for money from Steve and his next task was to level some of the Mythe bricks in anticipation of getting some of the Paddington blues. We haven't shaken hands yet with Costains on the this deal, the process of shifting and turning the bricks over allowed Jo to collect 3 dumper loads of bricks to keep the brick cleaners happy. Here Vic is loading up! 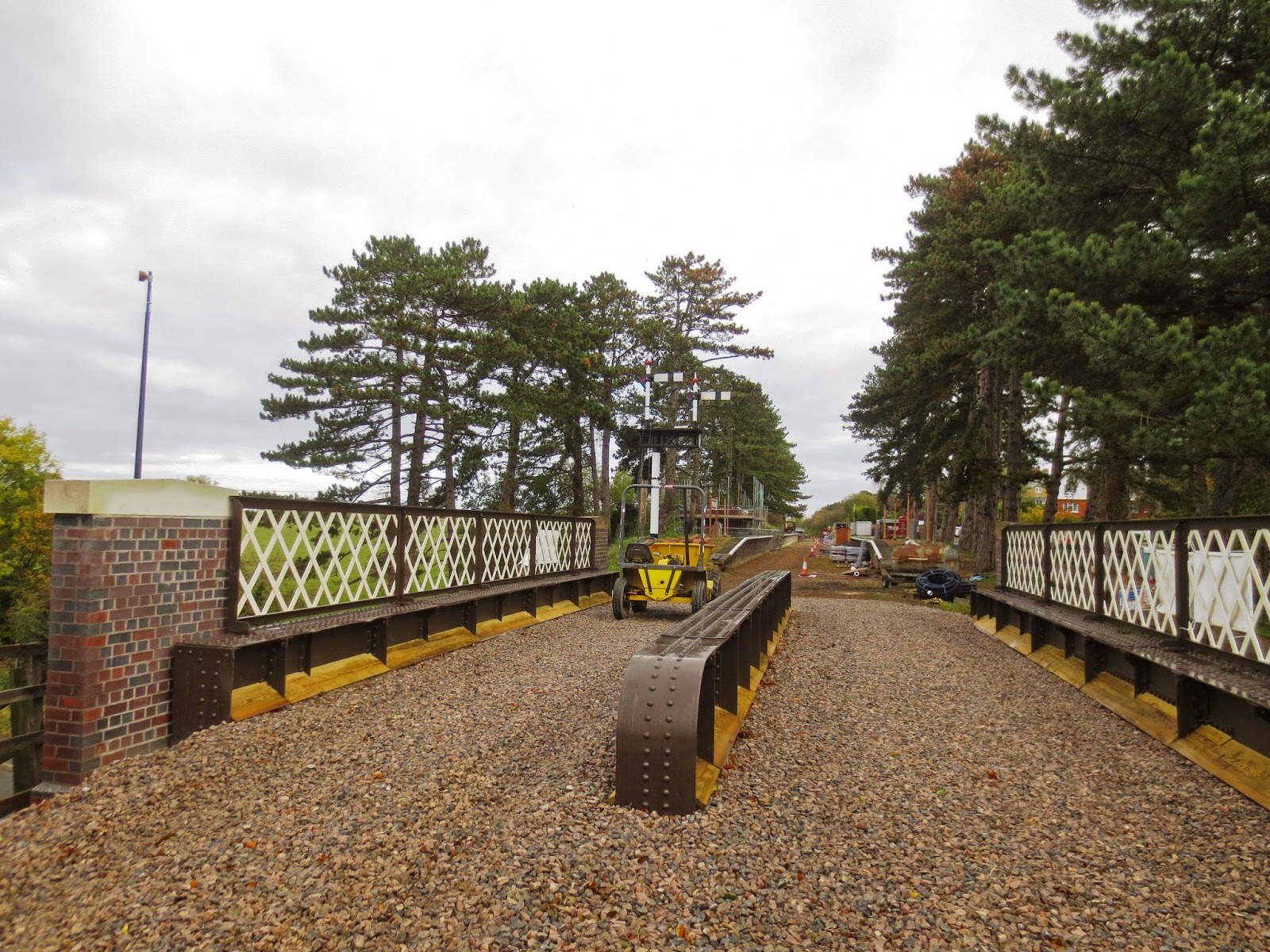 It was great to be able to take the dumper over the Evesham Road Bridge again. I can assure John Baldestone  that we imposed a speed limit on Jo and no damage was done to the paintwork! 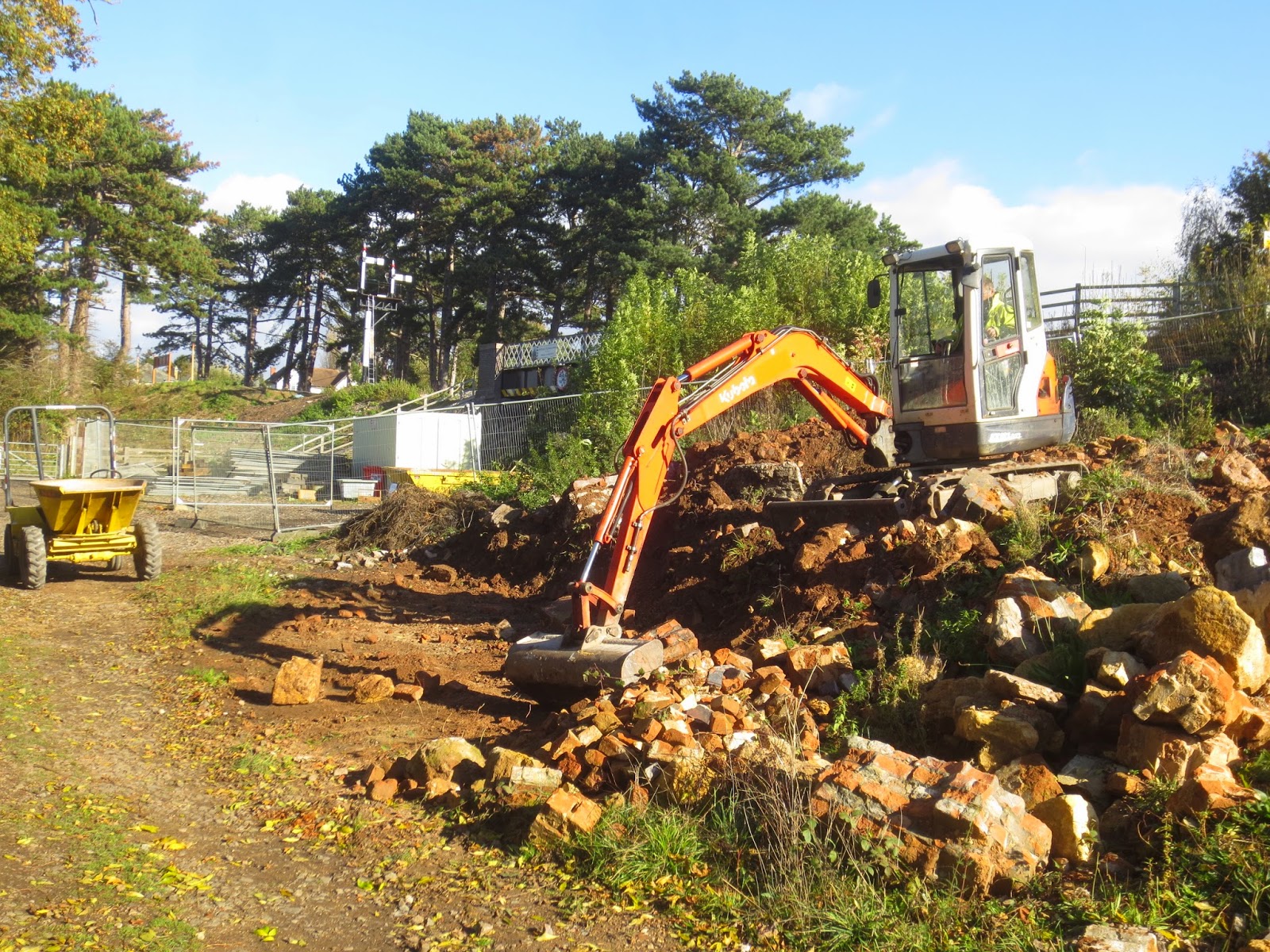 The last part of the exercise was to do some levelling out. As a result of the scraping and tidying, there is now space for several loads of bricks, wherever they might come from. 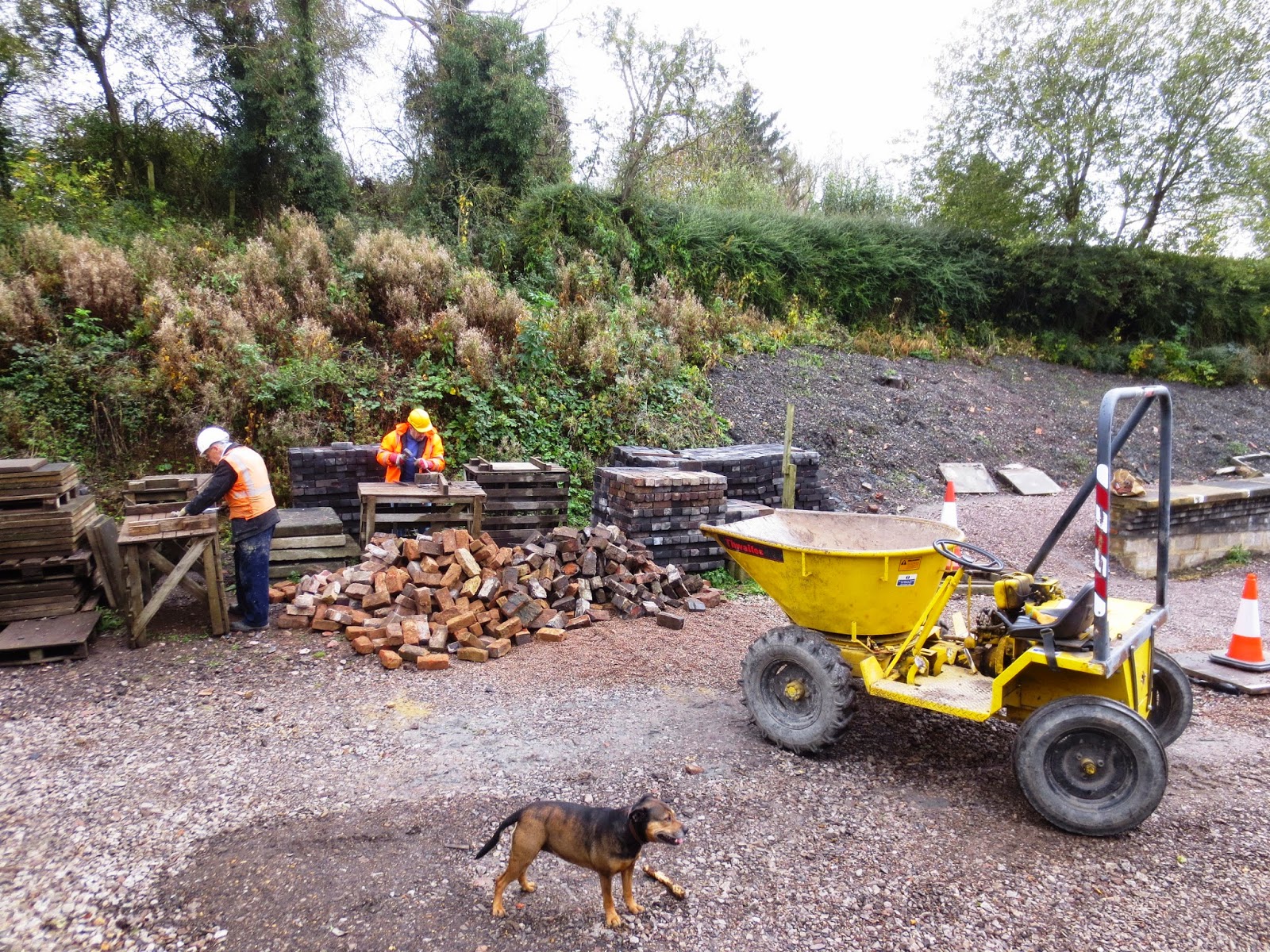 Back at the northern end of Platform 1C the bricks were duly piled up for cleaning. Here Roger H and Peter K pretend they haven't seen the pile - I think Robin is hiding to the left!

Peter K is off for a month or so to get his knees fixed - we all wish him a speedy recovery and look forward to him(and Tilly) returning soon. 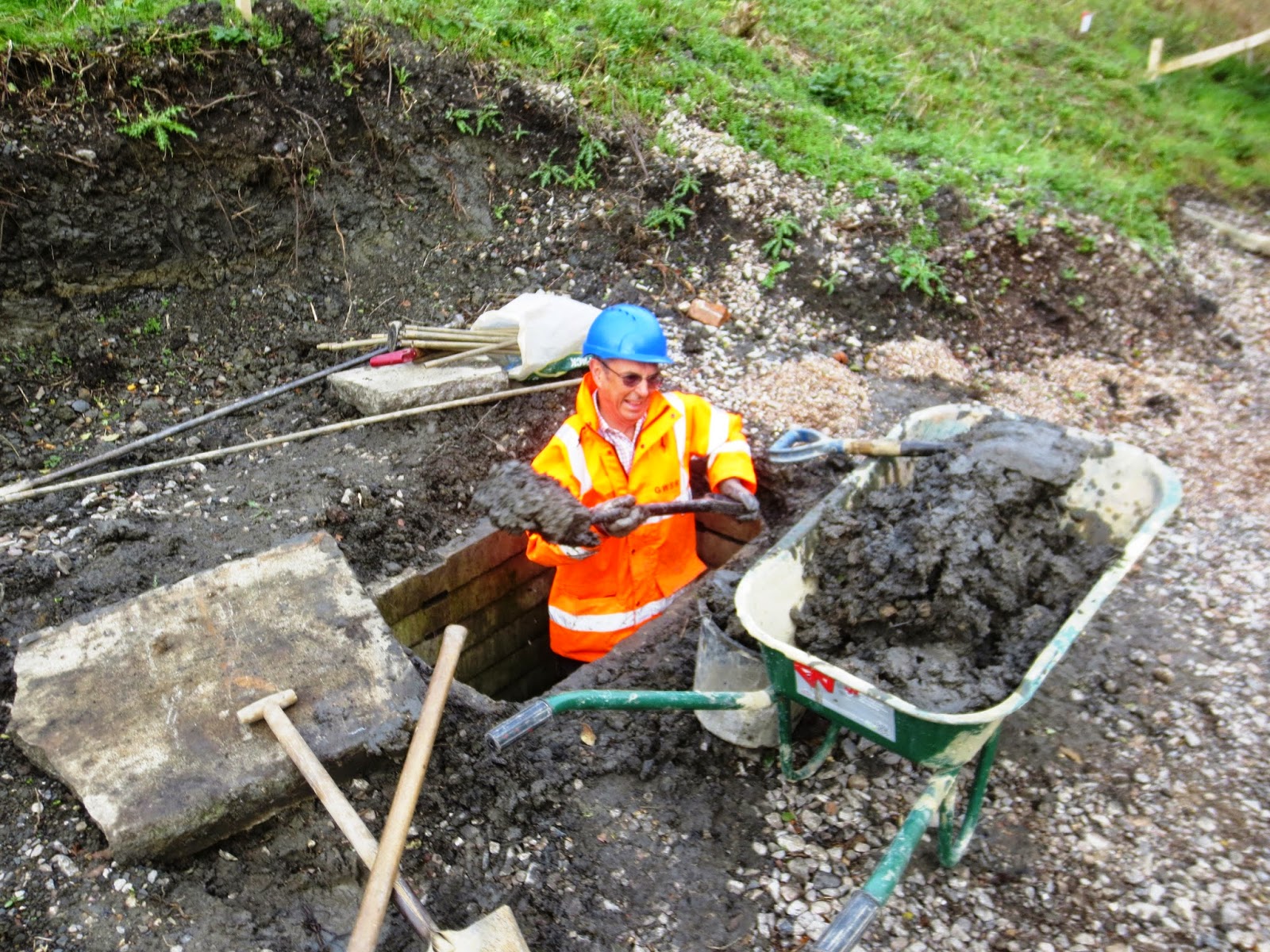 And now the hero of the day award and it goes to Roger J! We are starting the arduous task of inspecting the side drain catch pits. I have never seen quite so much soggy muck come out of such a small space. Roger persevered all day and Im convinced it was just his hat showing at the end of the day. 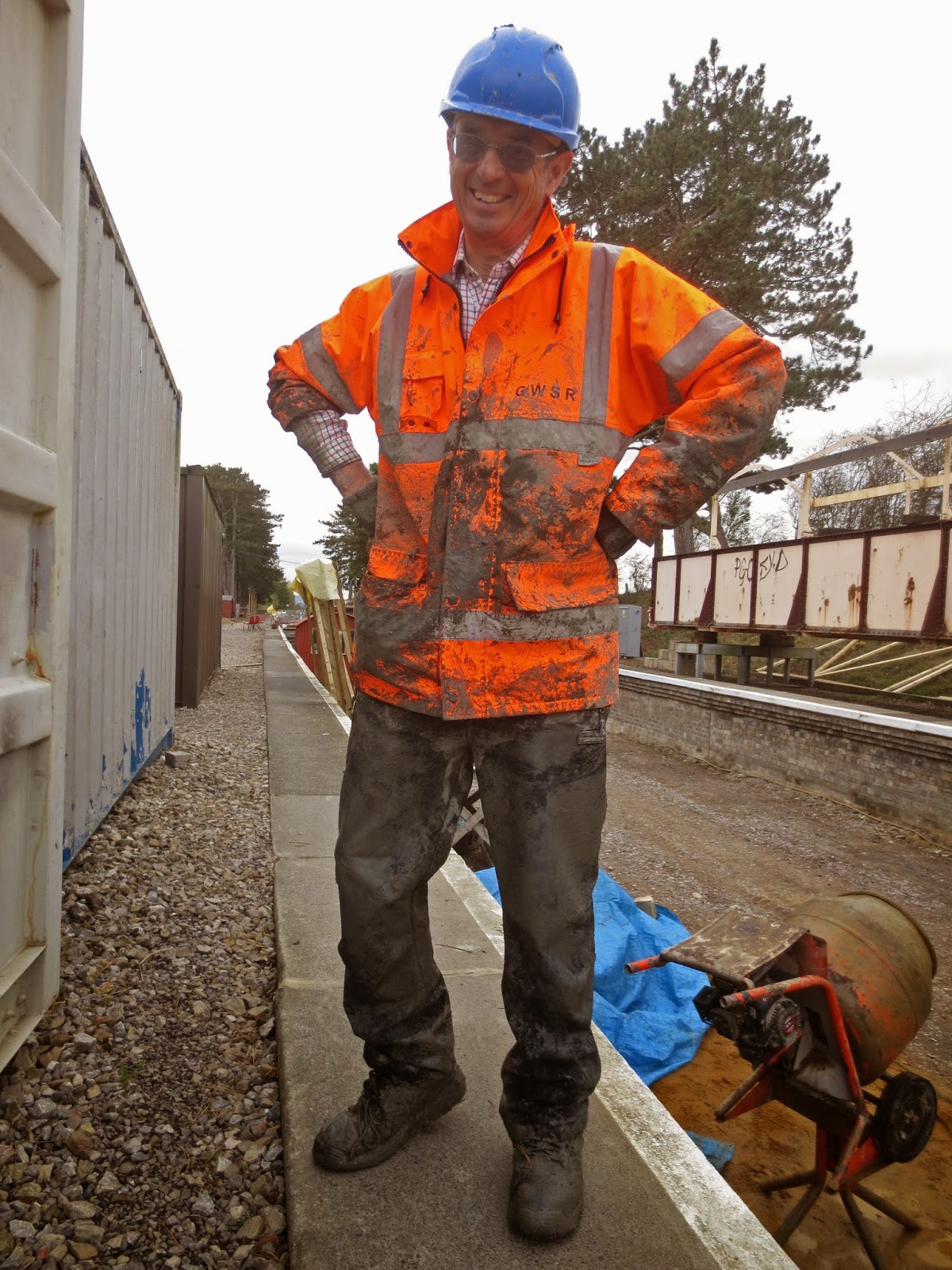 How he's going to explain this when he gets home I'm not quite sure. Well done Roger.

Thanks to everyone for their efforts today - particularly Jim H who was duty officer for the day.

Bill, will you be able to say where at Paddington the bricks are from, can understand if this has to wait until the deal is done) I worked at Padd as a Maintenance electrician in the 70's and 80's

Richard I was conducted round the Crossrail site on Thursday last week looking at the turntable and engine shed sites near Westbourne Park. We are hopeful of obtaining the floor bricks from the turntable floor, as these appear to be in good condition and there is little or no mortar attached. Unfortunately the mortar in the circular walls of the turntable is particularly strong and beyond our capability to clean off easily. Very similar to the Avonmouth turntable in fact.

What happened to the promised signal box photos?

It's to keep those pesky cyclists from cycling through! Lol!
Aaron