There  were 20 Volunteers on site today, including new recruit Martin Lovegrove (welcome Martin) and Dutch guest Volunteer Martijn(welkcom Martijn), a colleague of Jo. 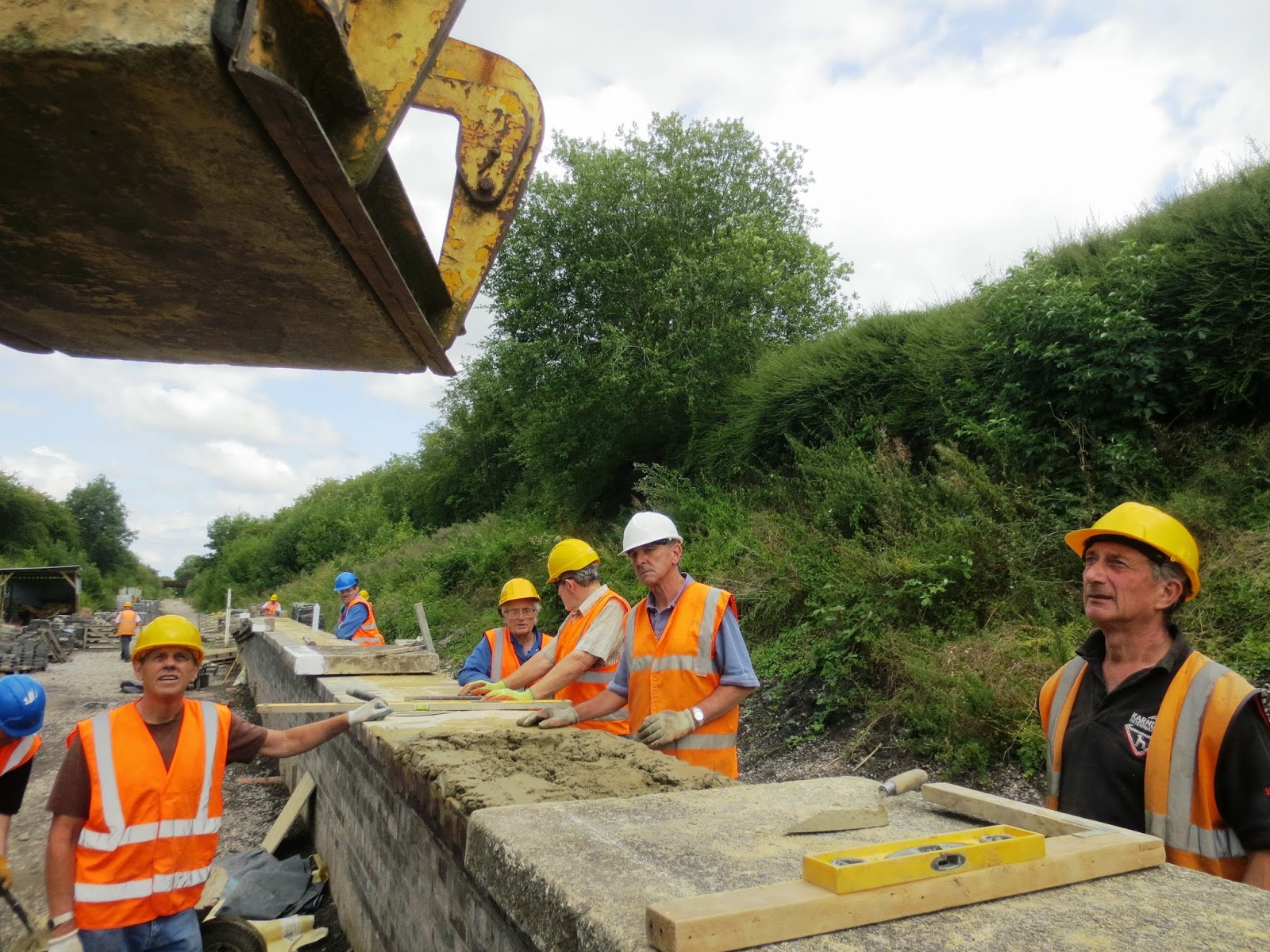 It was  a day of ups and downs - some of them in the the copings slabs on 1C (or better described as ins and outs). A group of volunteers (Roger B, Mike, Terry, Rod, Steve B and Tony) at my behest  were trying to fine tune the curve of the slabs being laid on 1C. Man handling 4ft slabs is not easy at the best of times! However the  Fairview lorry and Richard came to our assistance, and by the end of an intense 2 hour session some real progress was made. 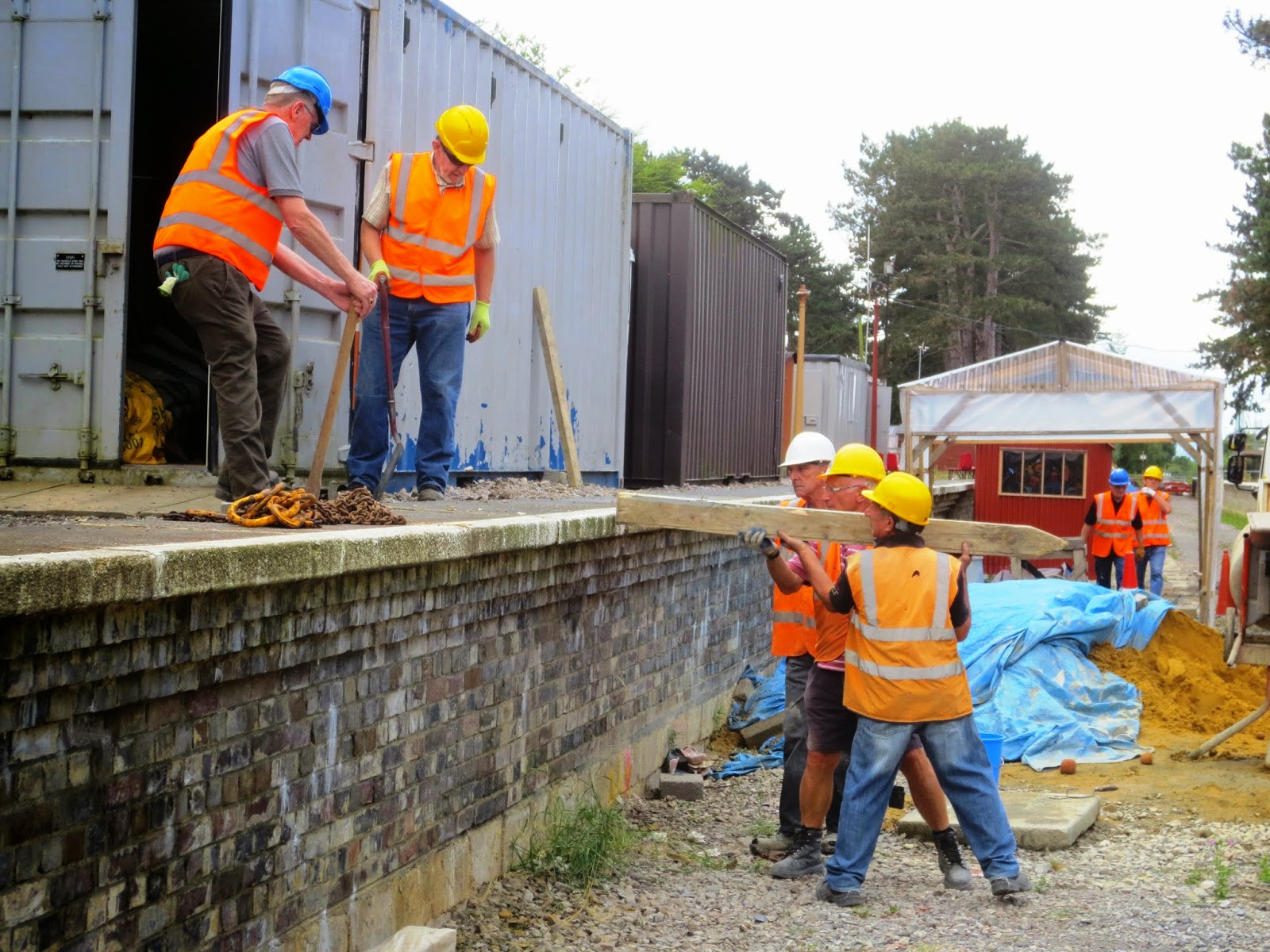 In order to make sure things were going to plan we adjusted some of the slabs leading up to the curve. We will bed these in at a later date. As I say the end result was pleasing enough and I  learnt an awful lot about  laying slabs on a curve! 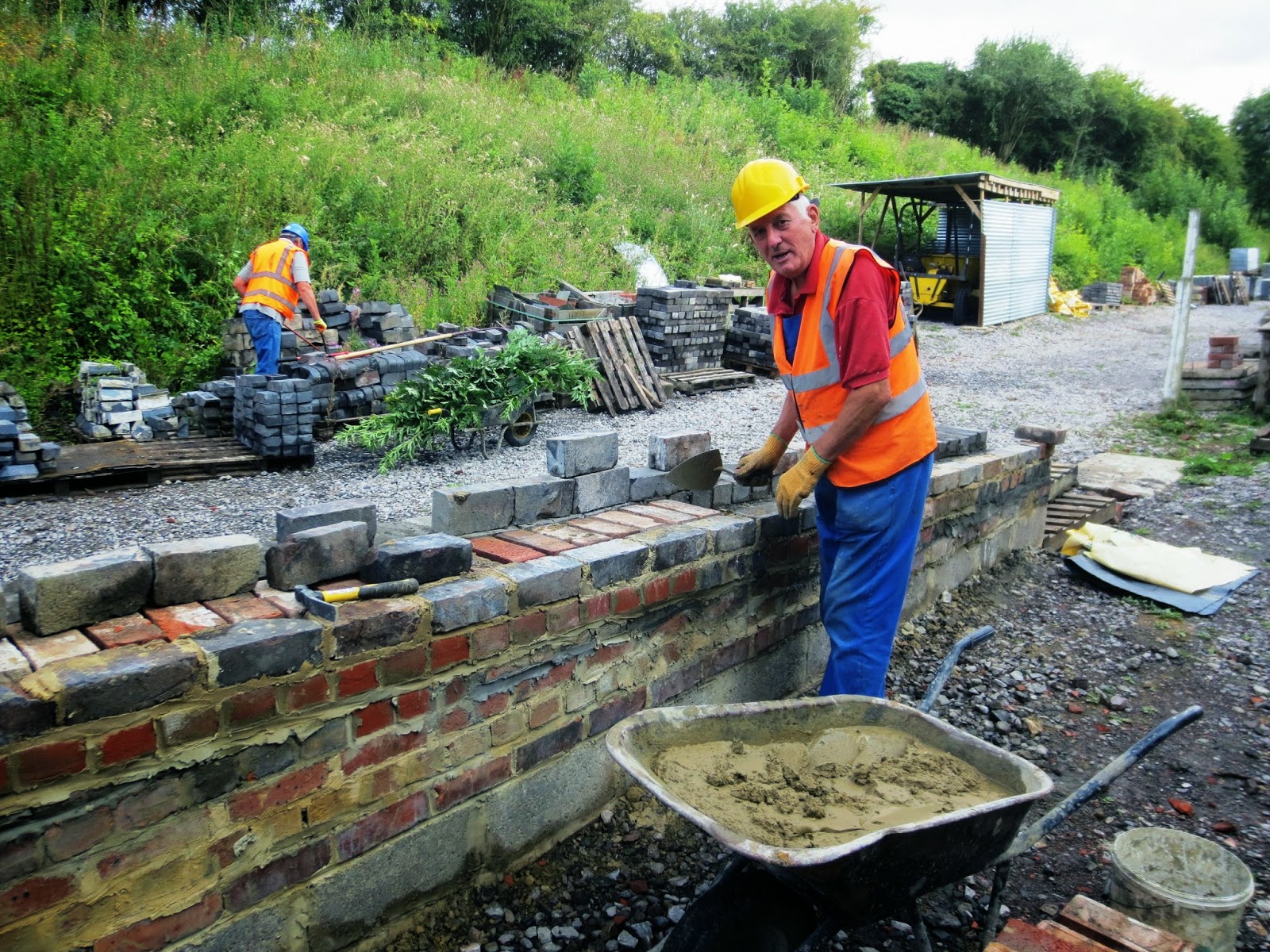 On the end of 1C another gang (Peter H, Peter Q and Clive)were doing there best to finish off the brickwork on the ramp. This seems to have gone pretty well with one more row of corbelling to go? 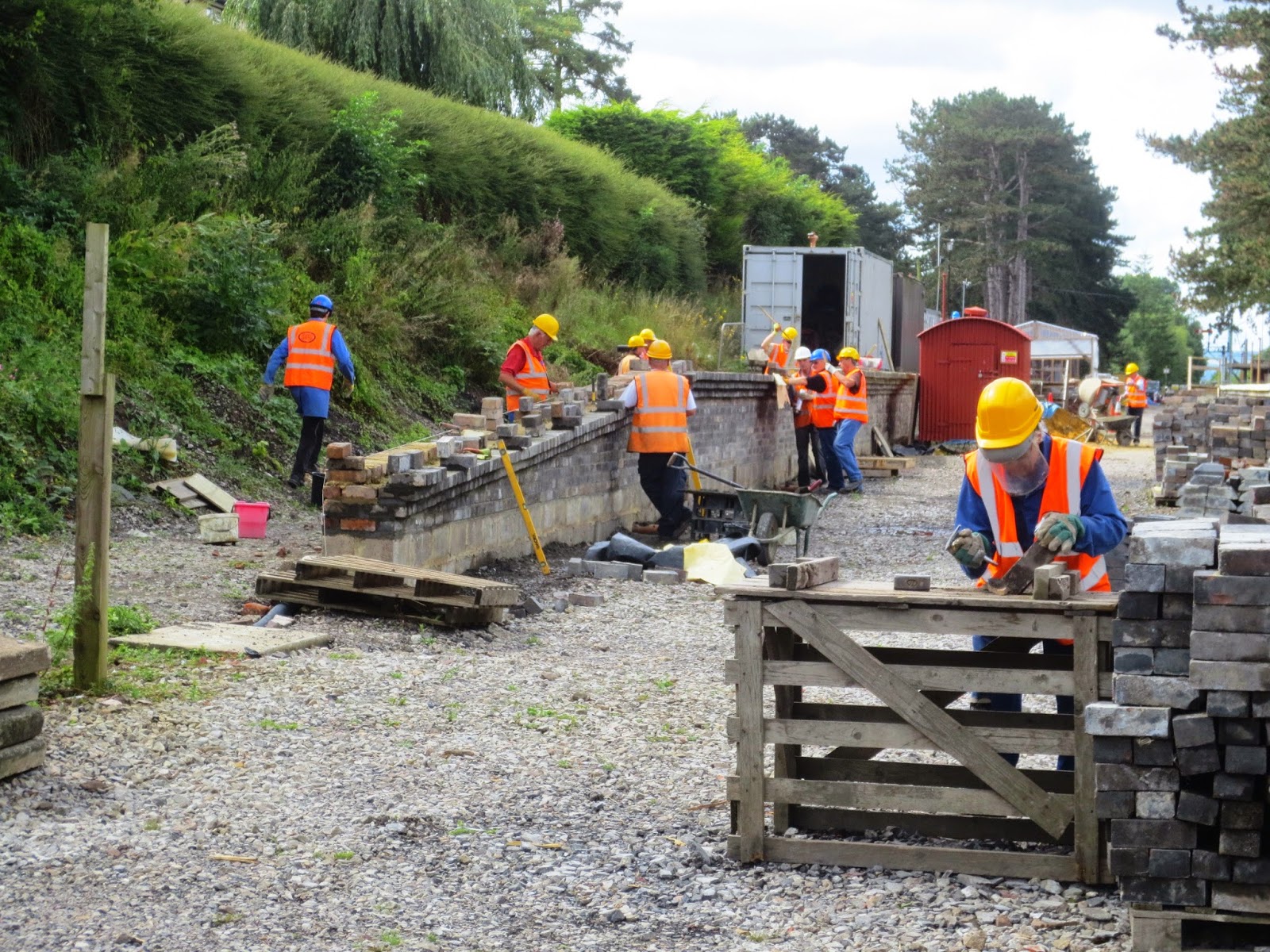 Chris, David and Mike continued with the dreaded brick cleaning, despite all of the noise going on around them. 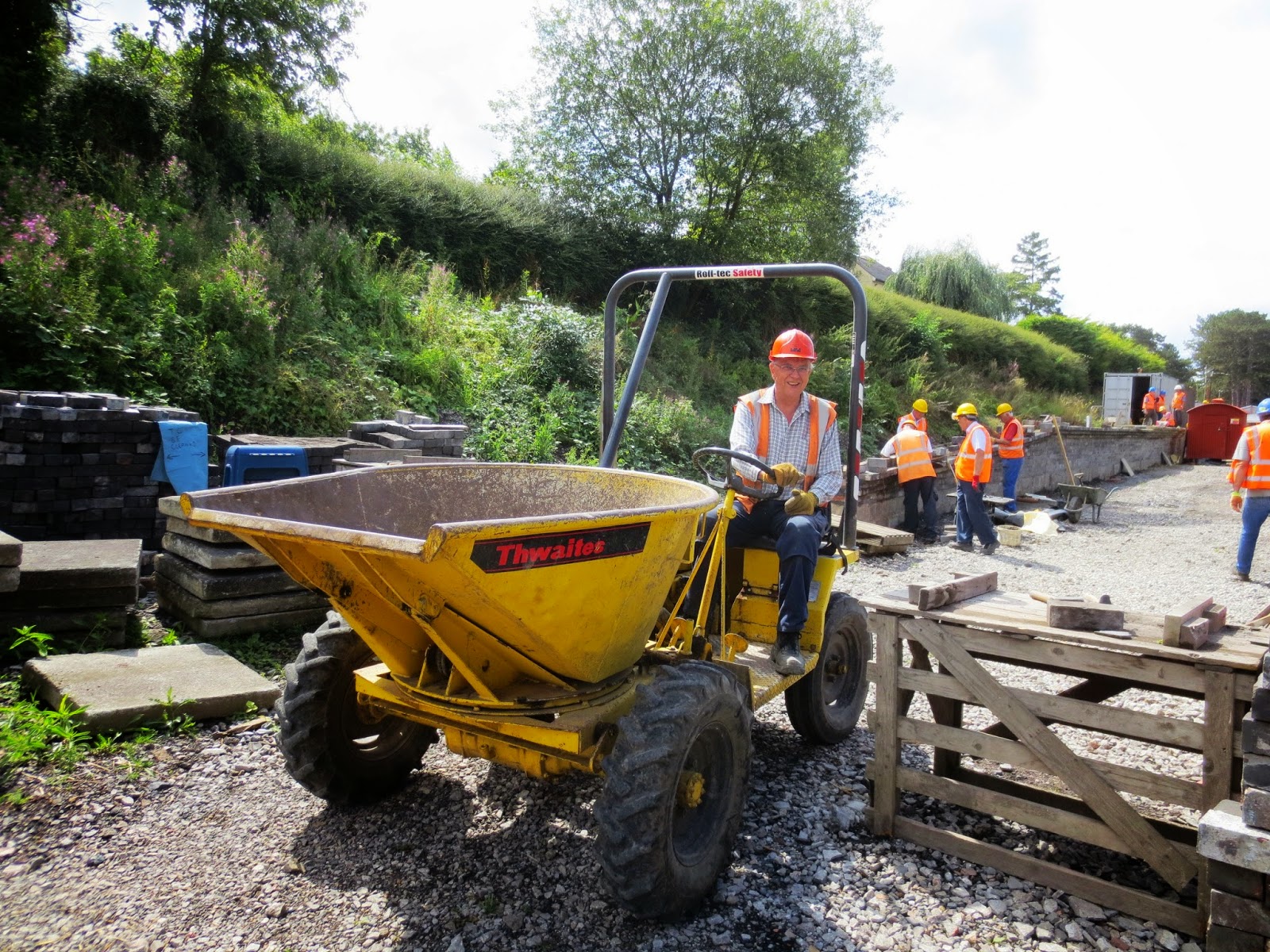 This was caused mainly by another gang shifting bricks northward to allow the centre drain and platform 2C to be set out. 4 dumper loads were shifted leaving at least another four to go on Saturday.

Some other pictures of the day, from Jo's camera:-

Also fantastic progress on the bridges, and an informative blog. Note though that commenting seems to have been restricted so much (on that blog) that there are very few comments on there.

As a rough guess, I think you have between 5000 to 6000 bricks to lay on the signal box - so brickwork finish will be March 2015, perhaps? (Assuming 100 bricks per session average.) Extrapolating forward, my guess is that the whole station might be finished by start of the 2018 running season. Is this the sort of timetable you are thinking of?