A nice and relaxed sort of day - less hectic than Wednesday and Thursday which allowed us to catch up with more tidying up and general maintenance. There were 14 of us on site - a happy band of pilgrims!


The task requiring the most muscle was the shifting of the remaining concrete blocks from the northern end of the site down to 2C. Fortunately we still had the 6t dumper on site which made the task that bit easier.

The other main task of the day was the further clearance of the embankment behind 2C. Recent rain seems to have made the vegetation grow extremely rapidly. 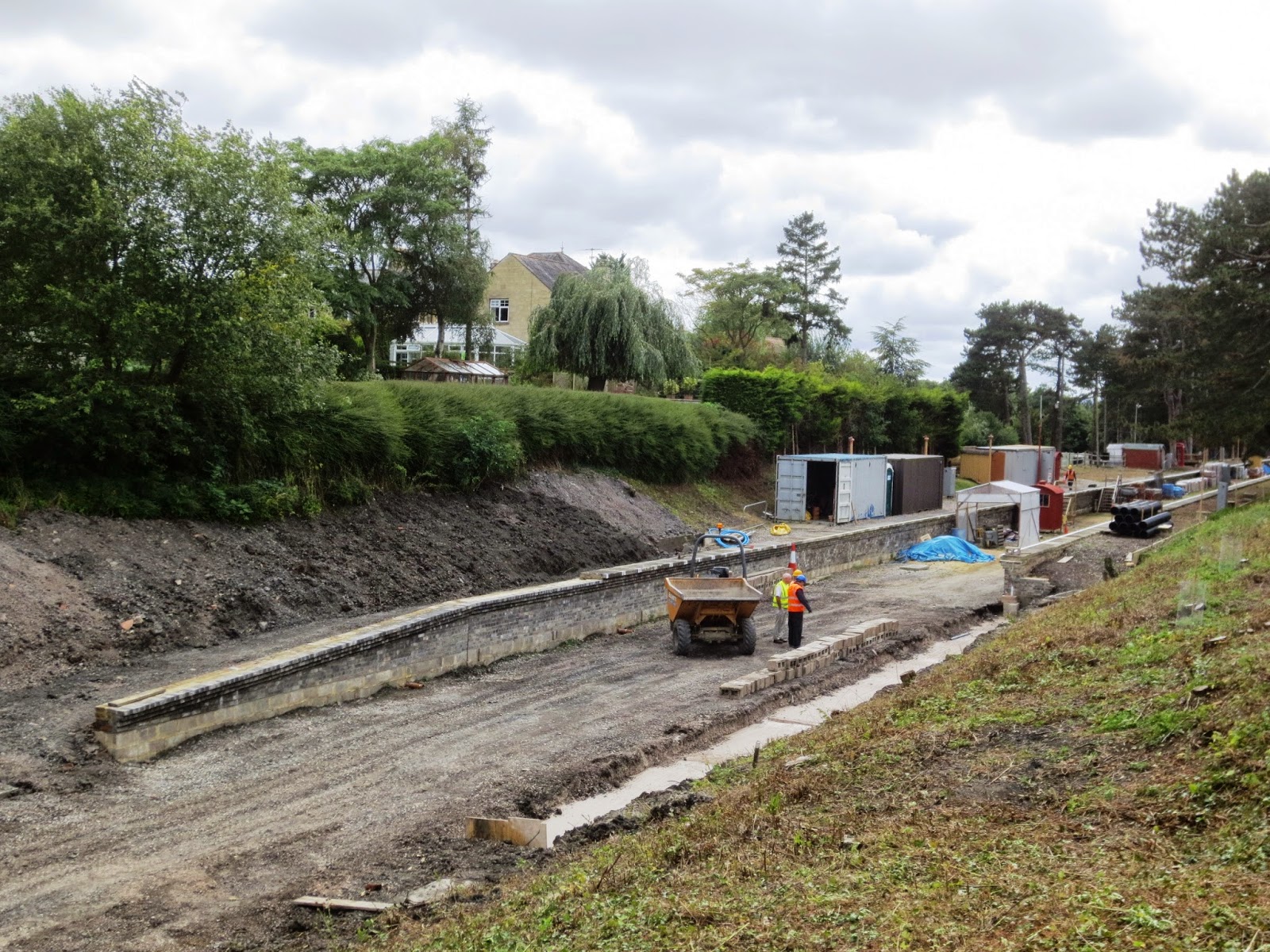 Nevertheless where its clear it really looks most impressive. Here Jo was able to take a good panoramic shot from on top of the newly cleared embankment behind platform 2C.

What a great shot this is, showing the newly laid foundation for 2C and the nearly completed 1C. Two things of note : the transfer of the spoil extracted from 2C and placed behind 1C was a brilliant job. The soil extracted was profiled up into the embankment behind 1C. The other thing of note is that the concrete footings for the 2 centre drain catch-pits were dug, laid and  temporarily refilled. The drain itself will be laid in the next couple of weeks.

Down  by the Signal Box Dave and Tony started the  vegetation clearance work behind and to the side of the box. If you don't keep on top of the job, nature will quickly take over!


Talking of the Signal Box, Peter K has made a fine job of fabricating a threshold footplate for the main door. It looks pretty good to me Peter!

Last but not least, John B was giving the Sales Kiosk  (Aka The Potting Shed) a freshen up with a new coat of paint.

just when you begin to give up on blighty; tales of wondrous deeds appear on this blogspot.
Amazing stuff

Farmers here abouts in Kent, use flails on an extended retractable hydraulic arm, from the rear of their tractor's to clear hedges and road side vegetation. Wouldn't it be easier to use one of these on your embankments?

Noting that Jo will be away, I wonder if anyone will continue to take progress photos on the bridge works, as 15th Sept is a long way away! Without the bridges, the station won't be much use, and it's an amazing history that Jo has been recording on the Bridges blog. Just a thought and thanks for all you do.

Something's going on at the snigal box today. What?

That panoramic shot looks amazing. The platforms look huge. It sure will be an impressive sight to see p&o parked up at 1c at the head of a rake of coaches under that footbridge from the same angle.... Won't be long now !