It was a pretty gloomy day first thing, with rain in the air and a biting wind. What's happened to Spring? However feint heart never built railways, so 18 volunteers turned out to keep things moving. 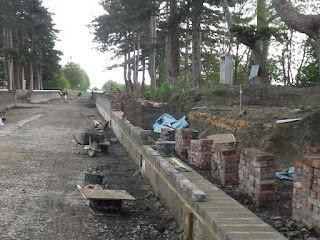 The bricklayers continued with Platform 2 and its remarkable what steady progress was made. Here the wall was "vacant" at lunchtime and the next courses of blues with their backing bricks can been seen here in a watery sunshine.

In other areas the electrical cupboards were being spruced up with a coat of paint. At the moment they are in silver - can anyone tell me why some cupboards  on our railway have black tops to them. Just idle curiosity!

Up on Platform 1A a team were rolling a length of the surface for the 7 1/4 gauge loco to run at the Gala weekend. One of the many attractions that will make a trip to see us worth while! As well as the platform surface the driveway embankment behind 1A was further cleared and its looking pretty neat and tidy now.

Tree surgeon Graham Feakin came along to have a look at a couple of the Corsican Pines that look a bit worse for wear.  He will report back with his findings.


Last but by no means least we had a visit arranged by Adrian Crees and some of  his P Way chums on the Mid Hants Railway (the Watercress Line) and we had an enjoyable hour exchanging views  and gossip on the trials and tribulations of building and maintaining a Heritage Steam Railway. They seemed pretty impressed with our efforts so far.  They would be happy for some of the BAG volunteers to go down and have a look around their territory. What always amazes me, when talking to volunteers from other railways, is that it is like talking to your own colleagues on the railway - they are all enthusiastic and friendly people and so proud of what they have achieved.

Visit the Watercress Line  at  http://www.watercressline.co.uk/


Jim Hitchen took some pictures for me during the day. Rather than be selective  I have included them all, each tells a story:-

Have you spoken to Tewkesbury Borough Council? They are going to be demolishing the old embankment opposite the Mythe Waterworks. There are 3 bridges there that could be a useful source of bricks if you need them?

Being an electrical engineer, I would have thought black was the worst colour for an electrical cupboard roof, better being white.
In hot weather in full sun, I would imagine black could cause excessive heat build up, which could be a problem for the electrics within the box. Probably more to do using a waterproof weather protecting paint.
Steve.

What happened to Spring?

It took the last train outta there.

Mark,
We due to get the Mythe bricks.

Hi bill, your post says 'even more reasons to visit during the gala. Does this mean there is a vintage bus sevice to broadway from todington during the gala?