It was a very relaxed day today, with 13 Volunteers focused on the to-do list and all the objectives being met by the end of the day. The cold wind and heavy showers did not diminish the enthusiasm and good humour among the troops.

Jim Hitchen used his contacts to obtain  five location cupboard doors. These are generally as scarce as hens teeth, being the first thing that's chuck away when the cupboards are decommissioned. 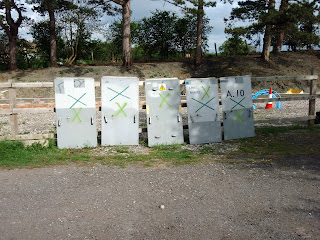 I must  thank  Network Rail and Invensys staff, working on the Reading Re-modelling Project, for their kind donation of  the cupboard doors. Also to Jim for taking time out to collect them. 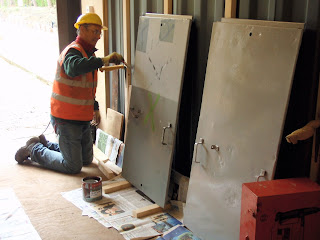 Jim and Roger set about a fitting process to see which doors  were a best fit on our cupboards, and then removed them to the container for painting.

They will then be returned to cupboards which will also get a coat of paint. Its all going to look a tidy job and I was well pleased with progress.

Over on Platform 2 Clive, Steve and Bob J were making headway on the brick and block laying. 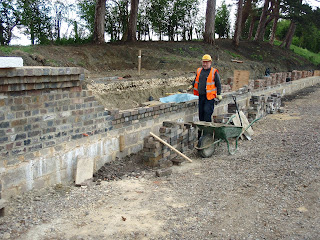 Clive was a pleased as punch to get 2 courses on the first stretch, despite being interrupted by the rain. 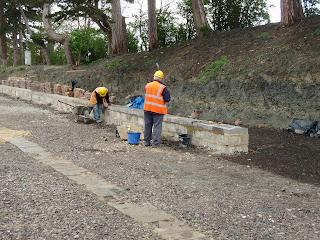 At the far end Bob and Steve finished the block laying. Only 6000 bricks to lay now lads!

On other fronts John Simms touched up the primer on the newly fitted lampposts and then managed an undercoat on each before the end of the day. This in between mowing the front drive! 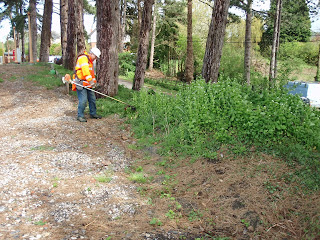 Also Keith Gurr managed to cut back a fair bit of undergrowth from the Platform 1A embankment. With any luck we will get it finished for the Open Evening. 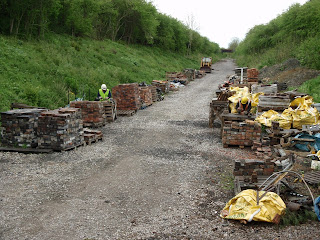 At the northern end brick cleaning continued, with Robin and Roger plugging away. I checked with the Costain's Site Manager at the Mythe and all the paperwork has been cleared for us to receive the bricks  including delivery, FOC. Brilliant!

Dave Bowie sorted out some  important signage on site and we ended the day feeling that it was a worthwhile session,

Finally we had an unexpected visit from Malcolm Temple this afternoon. Its not often we see Board Members (Alan  Bielby apart ) and its always good to see the head honcho. We had a pleasant  chat and he left.

The Open Evening raffle tickets are available to purchase now. The Prizes are really good, with dinner for 2 at the prestigious Russells  Restaurant in Broadway, A meal for 2 on the Elegant Excursion and Tea for 2 at the Lygon Arms. There many other prizes as well. Buy them in advance from Marguerite's or on the evening.

"We had a pleasant chat and he left."

In politics that would be code for "No decisions were made and we couldn't agree anything worthwhile, so he stormed off"

Bill - unless that's what actually happened - what a shame you get such bitter and twisted comments like the above ( with no name ). Is it really too difficult to write ' How nice to see MT coming along to see how things were going, and talk to people : it confirms we are ONE railway '
Chris Crump

Re above - I have to align myself with Chris - I speak as I find. There is no point in courting suspicion or controversy. We at Broadway just want to get the job done.

That's great news about the bricks from the Mythe. Will they be carefully recovered, stacked and delivered on pallets ready for use? Any ideas about how many you might get?

I wish! They will be brought over by the lorry load and tipped. We will sort them out.

I hope you can reclaim a large number of usable whole bricks but I fear many will be lost, firstly in the initial demolition and then more when they are dumped at Broadway. Still, plenty of backfill for the platform voids, I suppose.

We will try to have the cap stones recovered complete and undamaged. I am sure we will recover 5-10,000 bricks from this exercise. Remember Constains will be doing this as part of a fixed price contract and it would have been simpler for them to transport them to the crusher.