Jo Has been in discussion with Bryan Nicholls, owner of Gotherington Station on the GWR, about recovering a running in board post that was in his garden. Bryan kindly agreed that Broadway could have the post if we carefully extracted with out wrecking his garden!
Here is Jo's report:-

Despite exploring several potential avenues for original posts to make up the two running in boards required for Broadway station, we have so far been unable to secure any examples of these scarce posts in cast iron. A broken one was found buried in the wreckage of the station, and this gave us an idea of the size and shape of what was required.
Finally, thanks to the generosity of a member, we were offered one original post from the garden of Gotherington station. All we had to do was dig it out, and carry it across the garden to a van. On the day, six brave Broadway volunteers declared themselves ready to dig and carry, and we set off in good spirits to the site. After finding the remains of a Broadway post encased in a very generous lump of Victorian concrete, the post in the garden turned out to be a lot easier to remove, and the happy 6 were soon heaving it through the garden, after pausing for the obligatory photo stop.
The post is now secure at Broadway, and will be used as a sample to make three copies. These, together with 4 newly made cast iron finials, will then hold up the two new running in boards for the station.
A good time was had by all, and Broadway is an asset richer.
Jo
and of course the photos! Thanks to Pete from Building Services for his help and driving the GWR truck. 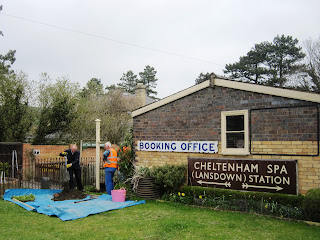 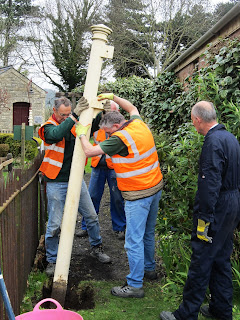 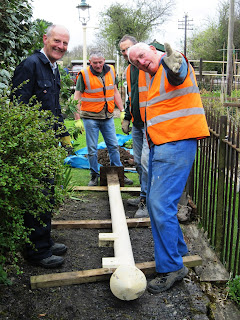 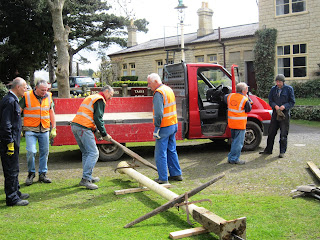 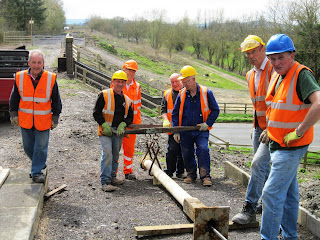 wow thats such a lovely little station, i bet the gardens really interesting with all that railwayana in, was it sold before thhe gwsr came into existance?

Surely it would be Edwardian concrete and not Victorian.