Another cold day but that did not stop 16 volunteers turning out. 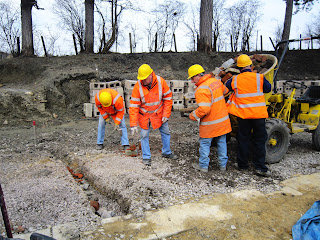 As work has progressed at Broadway the main trackbed thoroughfare has become pretty contaminated with clay and general muck, which causes lots of standing water when there is significant rain (and we have had some significant rain this Winter!) We decided, before the next section of platform 2 footing goes in (next Thursday and Friday weather permitting) that we would cut through the crust of the trackbed and put 6 lateral drainage channels in. This was a pick and shovel job and its only virtue was that it kept people warm. 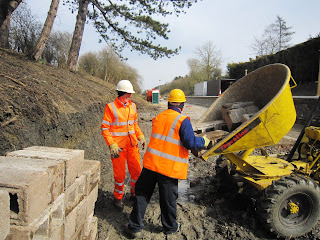 Also about 30 blocks remained to be brought down from the northern end and these were retrieved by Jo and Gordon, and to stack alongside the other 300 or so already retrieved. There is certainly enough blocks now to complete one  course of blocks along the 50m stretch of footing and get half way with a second. 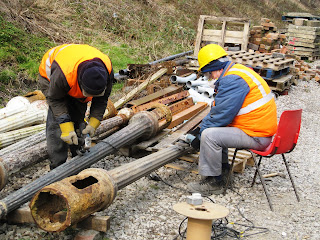 On other fronts the pretty grotty task of cleaning up the next set of lamppost was completed by Mike S and Peter H. The lampposts even ended up with a coat of primer. Brilliant! 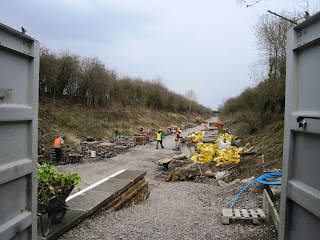 The heroes of the day for shear determination were the 5 brick cleaners. Standing in the chilly wind all day deserves a medal. Nothing could proceed without them! 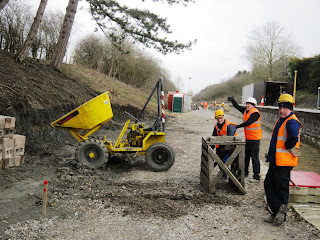 Finally, one of Jo's candid shots that shows Volunteering is not all muck and bullets - really good humoured camaraderie builds up. If you would like to join the Broadway Area Group as a volunteer make an application through the main GWSR website or come along on a Wednesday or Saturday and have a chat to the lads.
Jo had occasion to go over to Toddington twice today and took two pleasing shots:-

I was amazed to read in Steam Railway that we have obtained 2000 buses from Taunton. Even as a regular Broadway volunteer with much inside knowledge, this was a bolt from the blue. Is this the start of a very determined effort to set up an intensive Laverton - Broadway link?

This article cheered me up, because the gala committee cannot find one bus to bring supporters to Broadway over the four days, now they can come in convoys!

2000 buses? Is this an attempt to compete with Arriva?! Anyone remember the Black and White buses and coaches that used to come in and out of Cheltenham Black & White coach station? Those were the days! (God I really do hate this prove you're not a robot thing)

Um,I agreed to bring my bus weeks ago have I been past up again?I know I'm not flavour of the month with certain parties at the railway so should I assume that I have been cancelled?I also hate the "prove you are not a robot"

Please call in and talk to us Graham!