Jo passed me the following of his moonlighting at the K&ESR!


Hi Bill,
Here are a few words about the K&ESR working week: 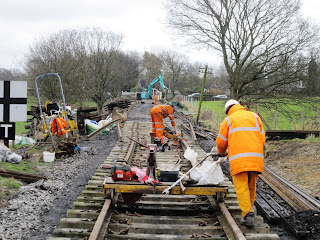 As I originally hail from Kent, where I have been a member of the K&ESR Pway gang since 1974, I still have that inner urge to heed the call when they have their annual working week. This year, it was to replace the last 300m of wooden sleepered track on the whole line, stations excepted. This stretch was half way up the 1 in 50 hill to Tenterden. The K&ESR was built at the same time as the GWSR line, but to light railway standards, so it is a lot steeper and curvier than in the Vale of Evesham. 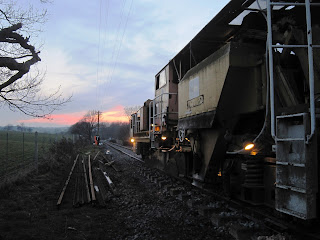 Others had already dismantled the track in the week before my arrival, so days 1 -4 were spent actually laying 15 lengths of track, using second hand FB rail and concrete sleepers. This was pretty back breaking work, as even though we had a 360 excavator, many individual items such as jacks, rail saws, drills and Bances are very heavy. Days 5 and 6 were easy – a ballast train came with granite brought in through Rye harbour, and this was expertly distributed with an enormous P&T ballast regulator, which you can see in action here: http://youtu.be/Tcuv-6u0buU 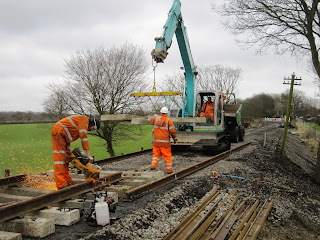 I was impressed! The track was then packed, slued, levelled and canted by an 07 tamper, which we watched from the warmth of the LC hut, as it inched its way up the hill. You can see it doing the last 10 yards up to the level crossing here: http://youtu.be/_STxAkon0QA Up to 17 cars waited patiently as it crept over the crossing, but the result was well worth it. I can remember packing this very bit in the 1970s, using only a jack and a shovel !


Day 7 was spent with a steam crane picking up old bullhead rail, chairs and rotten sleepers, in order to leave a nice clean site for the first regular passenger train the next day.


I was back on day 8 (Saturday), to find Broadway station under a thick layer of snow. I followed a set of footsteps, which led linea recta to the tea hut, where I found 2 stalwarts having a brew, prior to starting work. Worcestershire folk are made of strong stuff !


Jo
No one can fault Jo's determination to play his part in the pursuit of returning our Railway Heritage.
Posted by Bill at 17:00

No-one can find fault with the Broadway volunteers, (and no-where else on the Railway, come to that - Broadway, especially!). I cannot recall the last time snow, cold, rain and wind stopped play!

As an aside - and purely obversationally (is that a real word?), you seem to have changed your picture display format recently. When clicking on a blog picture, one can get an enlargment, in a separate screen - or a SUPER ENLARGEMENT). To view the next picture in the blog, you have to "backpage" to the Blog and then click on the next picture; instead of just clicking on the enlarged picture, to see the next one.
I love the SUPER enlargement facility but it is a little frustrating to have to go back to the Blog, for the next one.
Is this intentional, or just a half-way stage in a web-site upgrade?
Jim Boyles

Hi Jim,
I have noticed it, but it seems to be function of Blogger and it may correct itself. If it continues I will investigate it with Google.

From one of KESR's Firemen, thank you Jo for all your and the team's hard work! The videos look great.

For all down in the west, Jo has been running a series of photo articles from his days on the line from the mid 1970's. They are very welcome and it is amazing to see the change in the line.

Keep up the good work down in the West all of you. I be down to have a look soon.

Don't suppose there's any chance of persuading the K&ESR to bring their regulator here for a working visit, is there ?

If you are serious, come and talk to me at Broadway.
Regards,
Jo

Certainly. I can visit Broadway this Saturday (30th March) morning and introduce myself. David.

Hey Jo, do you think Jamie (KESR) would pay you commission!! :)

Jo didn't have to go all the way to Kent to swap some bullhead track for 113A flatbottom as we changed 12 panels at JJ Farms this winter!