A Thursday Special - Bricklaying in the Sunshine!

The Bricklaying Team got together with the Met Office and decided on a bricklaying session. Here is Jo's report and photos.

We had a lovely day in the sunshine today, 8 degrees and no wind – wonderful ! There were 4 bricklayers (Bob W, Bob J, Tony and Clive) and supported by one ‘bricklayer’s’ mate, Paul. At the other end of the site the two ‘Petes ‘ perfected the running in board, after a debate about the style of the letter W. Three letters were made ! In the end I went home, printed off a close up of the original BROADWAY sign from an old picture, and that was the style selected. However, it did not match a W used in another station along the line…

At the end of the day, we had laid 2 full courses of bricks along the currently remaining 20m stretch of platform 2. We felt pretty pleased with ourselves, so much so that at the end, Paul presented Bob with a ceremonial hammer, a prize for all the hard work put in that day. Or possibly for listening to the relentless stream of iffy jokes from Paul & Jo, while they were trying to do their work.

I am not sure that the blog followers will necessarily understand the huge brick laying achievement today - just want to let the team today know that I certainly do! Bill 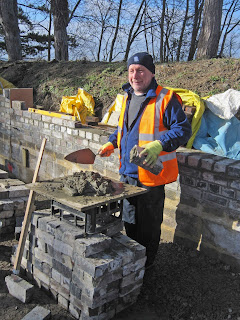 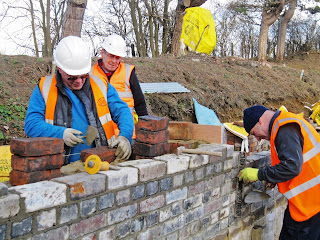 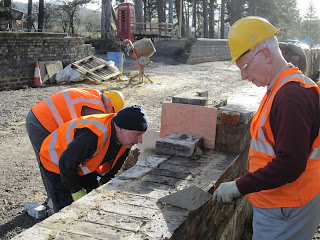