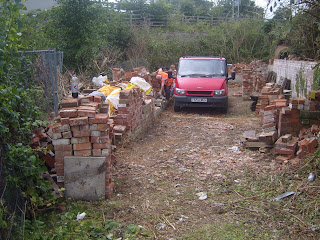 A hot steamy day on site and not ideal for pick and shovel! However 8 diehards, both at Ashchuch and Broadway kept the show on the road. Here at Aschurch Pete Dickinson from GWR Building Services drops off some pallets for brick loading and takes back a return load of blues and plinth bricks. 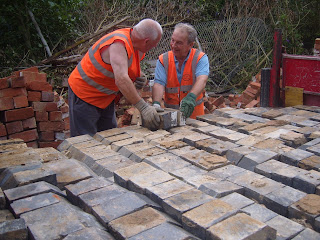 Here a friendly exchange between Bob and Dave. It was great effort by Andy and Bob to single handedly keep the Ashchurch project going on such a hot day 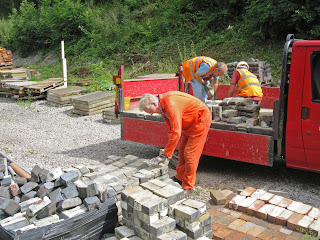 Back at Broadway the load of bricks were safely stored away by myself, John and Pete. 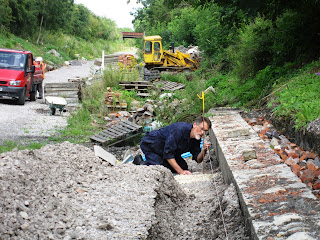 On site no less valiant efforts were going on with continued laying of a line of slabs behind 1B. Here Pete a recent new recruit gets down and personal with the line having dug 15m of trench in the ballast. A few pounds were lost me thinks! 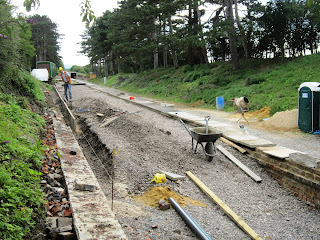 At the end of the day 17 slabs were laid by Roger, Jo and Pete which broke the previous record by 7. I'm not sure how they did it, but it was a remarkable job. Here Roger admires their handiwork.

Thanks to to Robin and Andrew who kept going with the brick cleaning.  It must be daunting to clean 50 and then see another 200 come in requiring the same treatment!

A particular thanks to Martin Boddy and Co. who came up from Basingstoke with a delivery of blue diamond paviors and bricks. These were donated to the BAG,  Martin having purchased them on EBay. Thank you!

Lastly a welcome to Terry(no 2) who called in by having been through his induction course. He will be joining the Saturday Gang in a couple of weeks.


Apologies for the late posting - I endevoured to do it first thing and lost the lot. I'm not sure it has improved with the re-write! More haste less speed as they say!
Posted by Bill at 11:14