An extra days work was arrange today specifically to complete the infill on 1B. Only a small team could make it but that didn't stop a brilliant job being completed. We have been concerned for some time about the stability of the embankment behind the platform 1B and the completion of the infill sees this potential problem  fully dealt with. 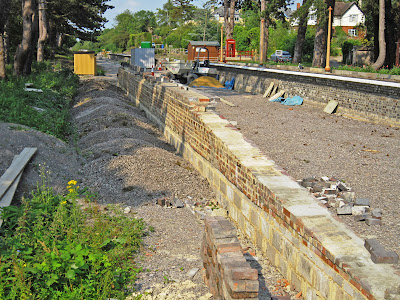 Not satisfied with completing the 1B job Jo and Steve Warren continued to the end of day by putting 15 loads of ballast behind 2A ready for raking and rolling on Saturday. The cherry on the cake I think!


In writing this I am conscious that I am not doing justice to the determined efforts of the lads today - probably on the hottest day we'll see this year. Thanks to Jo Roesen, Steve Bucknall, Rod Whitcombe and Steve Warren. This is as close as you'll get to a mention in dispatches!