We were anticipating a wash out today but Broadway Station Site's micro climate stood us in good stead until the afternoon. 20 Volunteers turned up today and great progress was made on a broad front. 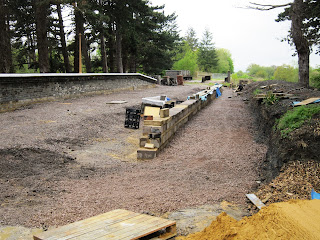 Work continued on Platform 2A, the layer of 100mm blocks being laid until the rain came. Ballast was brought in to level the rear of the wall, which was turning soggy with all the rain this week.  The bricklayers can start on the blues next Wednesday, if the the weather allows us to finish off the blocks on Saturday. I think it might! 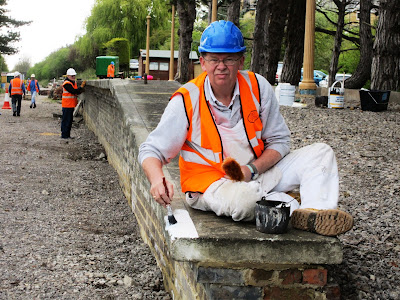 In the back ground above you can see the white line painted on 1A. A brilliant Job by Graham Dykes and Mike Trowman.

Here is one of Jo's excellent candid shots of Graham starting the painting and Mike in the background wire brushing the edge of the coping slabs. 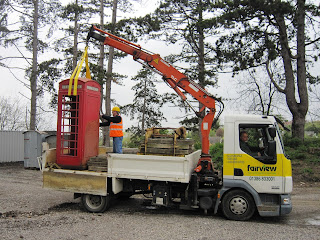 On other fronts Roger Terry and I went over to Winchcombe to pick up some more Coping slabs to finish off 1B. There was just room on the lorry to bring back the telephone box that has been earmarked for Broadway. A good deal of ingenuity and finger crossing manage to get it loaded up and then unload back on site. This was mainly due to the skill of Richard from Fairview Trading who was, as ever helpful, beyond the call of duty. Unloading the box 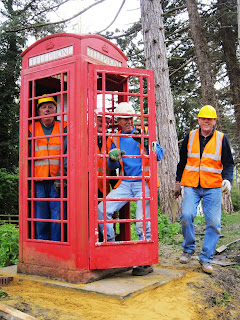 It ended up in what might well be its final resting place adjacent to platform 1A. Here the relief of getting it in place without breakages resulted in the playing of that well know game of how many volunteers can you get in a K6 telephone box.

Finally on this subject I would like to thank our colleague at Winchcombe for the procuring of the boxes on behalf of the Railway.  I can only say that we will restore it to its former glory and I am sure will be much admired over the years by train passengers and visitors to Broadway Station.


On other fronts, fencing continued at Childswickham  Road - thanks Bob and Gordon. Brick cleaning continued also. we are gradually getting our 2A blue brick stocks together, only 2000 to go!
Posted by Bill at 19:32

Will the phone box be restored in terms of condition or is the plan to restore condition and functionality?

We will restore it to its original condition. I doubt that it will ever be connected to any network.

Original condition indeed, and we are looking for a 'Button A / Button B ' coin box - can anyone help us with one?

Hope youv'e got the box firmly located in place. I would hate to read that you have been a victim of a visit from a scrap metal thief intent on a quick buck.

Hoping the security cameras are a deterant!

Bill, I see that a private railway is going to be auctioned off towards the end of May, includes telephones, lots of signalling equipment, e.g. block and token machines. I guess this kind of equipment is getting hard to obtain in working order these days. Might be worth a look at the catalogue. The auctioneer details are at the end of the catalogue, or see auctioneer page.

I drove down Pennylands bank this morning and was dazzled by the new white lines on platform 1. Looked fantastic :)

You are doing a great job in creating something from nothing.

Nigel, thanks for the info. on the Auction. We will follow it up.

The white line puts a finishing touch to Platform 1A.