Either the weathers getting unfriendlier or I'm getting older! It was certainly wet, cold and windy on site today!That didn't stop 20 volunteers turning out for some more punishment. 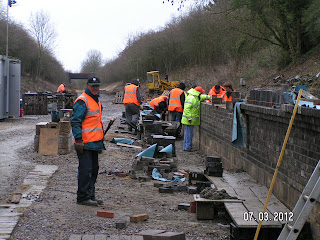 We are trying to sustain a big push on getting 1B finished up to and including corbelling and getting 1A finished off in its entirety. The Worcester College lads are pressing on with 1B, with Roger  B trying to keep the corbelling going behind them. 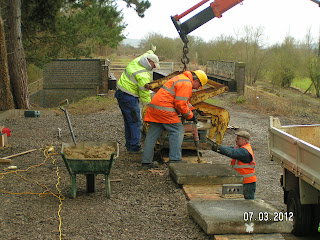 On 1A Richard came along and assisted with laying 11 more slabs - two more weeks and we should see it done! Here Steve John and Ray (welcome back Ray) ease slab number 5 into place. 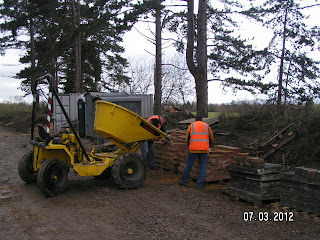 On other fronts a Terry and Rod continue to shift around the stocks of bricks so that they are in the most convenient place for laying. I don't know how many bricks they shifted, but it was a significant number and their backs will tell them exactly how many in the morning. 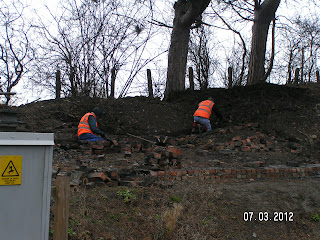 Last but not least Gordon, Ken and Co continued to reclaim as many bricks out of the old Platform 2 Waiting Room as possible. Its an arduous task with hammer and chisel. I must not forget the brick cleaning gang who chip their way through hundreds of brick each session.

Oh, nearly forgot... we 3/4 filled the dumper with top soil and deposited it at the bottom of the drive. Ran out of time, so couldn't reset the new flower bed.

I don't know about Rod, but my body ached last night, but not so bad this morning!

Had a great day, and a good laugh with everyone, so worth every minute.

Thanks for the detail Terry

Thats what its all about, have a Good Day and a Laugh, its a Hobby, and excercise???. Dont take it to seriously, weve all learned something from this project,I know I have.

What happens when you run out of bricks to keep the Worcester College lads occupied?! Any idea how much of platform 2 you'll be able to construct with current stocks?

We use them as 'infil'. Only joking.

Current stocks. When cleaned, we've probably got enough for possibly 50 metres of Platform 2.

Having said that, 'opportunities' for other sources arise at intervals.