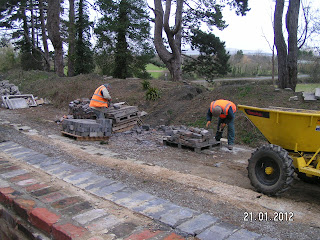 As you will have read in Wednesday's Blog (you have read Wednesdays Blog?!) we are beginning to run low on our stock of blue engineering bricks, and today saw half of the 15 Volunteers in attendance, collecting, cleaning and stacking as many blues as could be found on site. Here Peter and John manage to find clean and stack at least 250 blues from the debris along the site of Platform 2A (yes 2A!). 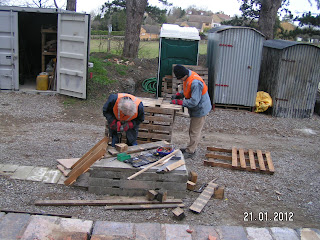 The ongoing cleaning up of the ex  Wisley Sewage Works  continues and extra hands required an additional brick cleaning bench. Chris Helm the master of invention, here 'knocks up' a new bench out of old pallets. David Helm is the man with the hat and the hammer.

Whist the brick recovery was going on Marcus Taylor (of Marcus Taylor Builders), who  donated a day of his time was laying the bricks along 1B, almost as fast as they were being cleaned. Marcus was supported by a small team of volunteers who kept the cement mixer going and laid the red backing bricks.

The hard graft continued in the car park, with several bonfires on the go. Andy P was feeling quite pleased with himself and his chainsaw, having virtually reached his target of clearing the the pathway as far as the Childswickham Road. It is really worth a visit to see the terrific job that has been done by all concerned.

In the meantime Margurite's Shed is very much back in action and we had a steady stream of visitors. Please continue to support us - we can't do without you.
Posted by Bill at 07:30

Love the comment about 2a. I wonder if we Will see that started this year? With the great progress you all seem to be making who knows.

2A !!! Bill you and your team are you trying to compete with the Reading rebuild :=)