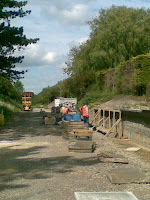 The construction team continued the platform wall on the northern end. The corbelling level was reached and here Ray L (from Canada) and Colin B (from Australia) teamed up to build the final level of the corbelling - a sort of GWR entente cordiale! 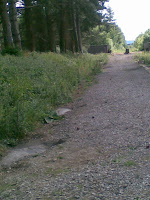 Dave B John B and self started our NVQ of Surveying, by looking at the levels of the proposed southern extension of Platform 1 (Now called Platform 1A). In the distance you can just about see the end marker post which, marked with the platform height shows the challenge in building this structure. Being on an embankment, it effectively has no support behind it. We've  got our thinking caps on as to the best way to deal with this. When this section of the platform was built originally, it was made as a wooden structure, to allow the sub soil to settle. It was subsequently change to traditional brick.

Finally the brick cleaning continues. It was great to see Garry Owen, his bolster and sledge hammer in hand, coming along to help us out!
Posted by Bill at 20:06

About your comment regarding the end of the new wall.

There would appear to be 2 options (1) to build a rear wall to support the platform fill: bottom of foundation to be 950mm below ground level (if enmbankment is stable and will not move)or (2) build in timber with timber or metal piles - a facing of brickwork (1B thick) at the platform face can be added for show if required.

Hi Keith,
That is very helpful and I will put these ideas into the melting pot in our discussions.
Many thanks.
Bill

call for the Time Team - dig a trench through the existing fill to see how the GWR did it....

So looking at the picture from honeybourne how much are you saving from there. Both lengths of brick platform walls?

I visited the site today, on my usual Sunday constitutional and had a good look at your proposed Southern extension (platform 1A). It would seem to me that your main problem will be the roots of those Scots Pines, as you are planning to build quite a way beyond the original platform base?

Certainly, it would seem to be a good idea to take a look at the original platform backfill, to see how the GWR did it but, I don't quite see how you'll get a full-depth platform in there, what with those roots!

Jim, Yes its going to be a tricky one - current thinking is to concrete pile the rear foundation with concrete beams spanning them. This effetively bridges across the main tree roots. It will be a bit more expensive but should provide a solid structure to build up from.
Thanks for your comments.