It was the BAG AGM this morning and there was a good attendance. This may have been enhanced with the knowledge that the  GWSR plc Chairman, Alan Bielby and Commercial Director, Colin Fewell were in attendance for the first part of the Meeting. This was to help the volunteers understand the current Broadway Project  Financial  and Design Strategy. It was a lively meeting, but there were  no bodies left on the floor at the end of it. I think everyone appreciated the time taken by Alan and Colin to further our understanding of some of difficult decisions ahead. The remainder of the meeting proceed as planned and I only came away with a few flesh wounds.

Back on site work continued on the Signal Box  and some great progress was made.  By close of play 3 sides of the roof had been slated and a start was made on the rear.Here is a nosegay of photos from Jo. 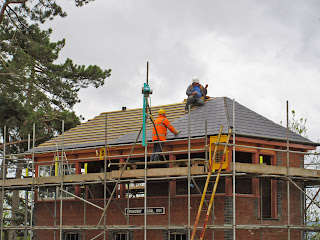 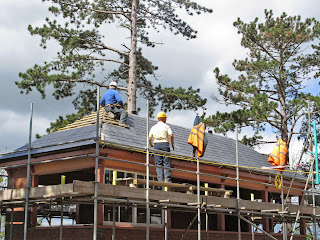 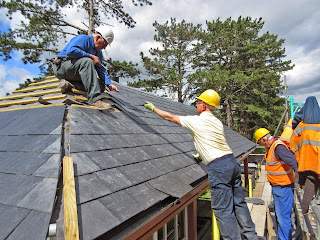 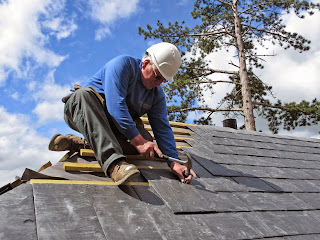 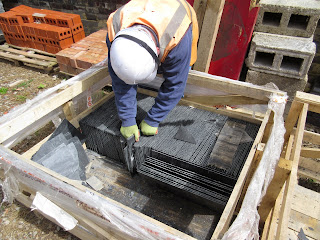 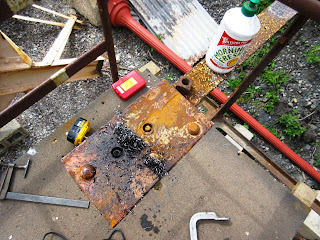 At the Northern end of the site work was continuing on the Footbridge. Here the results of Peter K's efforts removing the rivets from the tower hoops. As you can see, no easy task and in the end the Mag. drill decided to give up the ghost - so near and yet so far. If anyone has a commercial 115v Mag. Drill they can lend us, or indeed sponsor us for a new one it would be much appreciated. 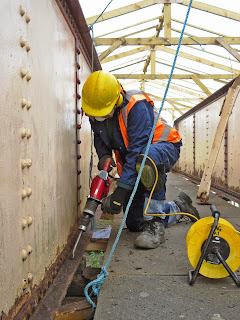 Roger Johnson, fresh from manning a polling booth set to in the span booth to remove further rust from the bottom joints.

More to report on Wednesday!

It would be good to get an official statement re the "design issues" you refer to. I did email the Chairman a week ago, and haven't had the courtesy of a reply. As someone who has made a 5 year commitment to pay monthly to the development foundation, I can only assume that either all donations are taken for granted or mine is not large enough to warrant a response. Whilst I have huge respect for the immense work you all have put in over the last few years, I can't continue to support it financially unless I'm told what's actually proposed to be built.

Dear Bill,
How about a fund on this blog to put a roof on the station? The renovation of the huge canopy at Loughborough GCR showed how much people were willing to give for a decent roof! Thanks for these great reports which are so appreciated.
Regards, Charles Maycock.

As an interested observer, I have been enjoying the blog about the station rebuild ever since I discovered it a few months ago. In addition to that for CRC2, I have regularly logged on to see the progress on what is a superb piece of work by all concerned. I must congratulate you on the rebuilt signalbox - such an improvement over that at Cheltenham Race Course. I sincerely hope that the station building is rebuilt to the same high authentic standards, completing a masterclass in heritage building recreation. I hope to come along and view the progress again very soon. In the meantime, I shall continue to eagerly await the next blog instalments.

John, I know you have long been a good friend and benefactor to the Railway and have a keen interest in Broadway.
I am sure your donations have been gratefully received, certainly by me.
Keep the faith that Broadway Station will be a station for everyone to be proud of.

Charles,
We are now looking for every opportunity to raise sufficient funds to see Broadway through to a satisfactory completion. Thank you for your suggestion which will get discussed by the BAG Committee shortly.

Bill the Signal Box is looking the bees knees, a great credit to the dedication of BAG members.
I am sure this building will act as a catalyst in any funding drive for the Station buildings.

On a lighter note, the SB has been laid in English bond. I assume that the station due to BRegs will be cavity wall construction. So will that be stretcher bond or have you got a dedicated volunteer who is willing to chop a considerable amount of bricks in half?
I too would be willing to "up the ante" to achieve an overall authentic station build.
You don't mention cost of a new mag drill?

The signal box is wonderful.

Your comment "to further our understanding of the difficult decisions ahead" sounds ominously as if the communication re the roof was one way , Board to BAG.

Can you reassure your many hundreds of supporters that a genuine GWR canopy is still a possibility if funding were available.

Or have the Board become entrenched in their views.

Let's have/but the Henley In Arden roof and canopy- NR seem determined to wreck the heritage stations on the N/W line and HoA is a perfect fit.

NR were applying to convert HoA to a 2 storey building and let it as office space not so long ago....

Andy chance of a write-up of what transpired at the BAG meeting, so that those of us who are remote can find out what the situation is? Thanks!

Mag Drill. If you can ensure that a donation sent to HQ is earmarked for you, they will have the benefit of 25% Gift Aid and you will have £100. Have we got a deal?