A great Saturday turnout with 19 volunteers doing their best to move the project forward. 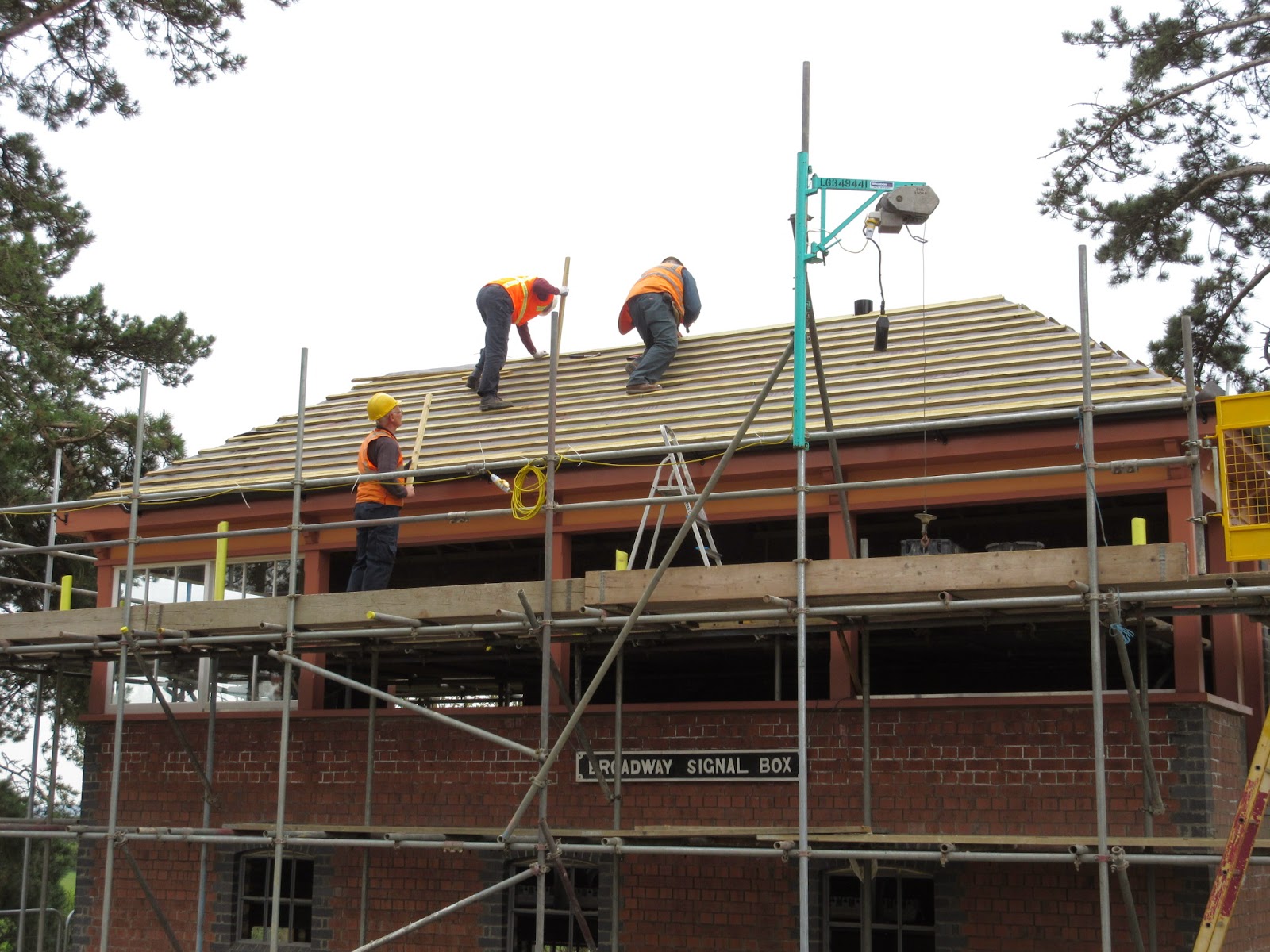 The Signal Box Gang were back in action. The first job was to finish off the slate batons at the rear. Here John and Paul tackle the top batons from the front, whilst Tony hands up the materials.

The morning saw the job completed, which effectively meant the Signal Box is now totally waterproof. 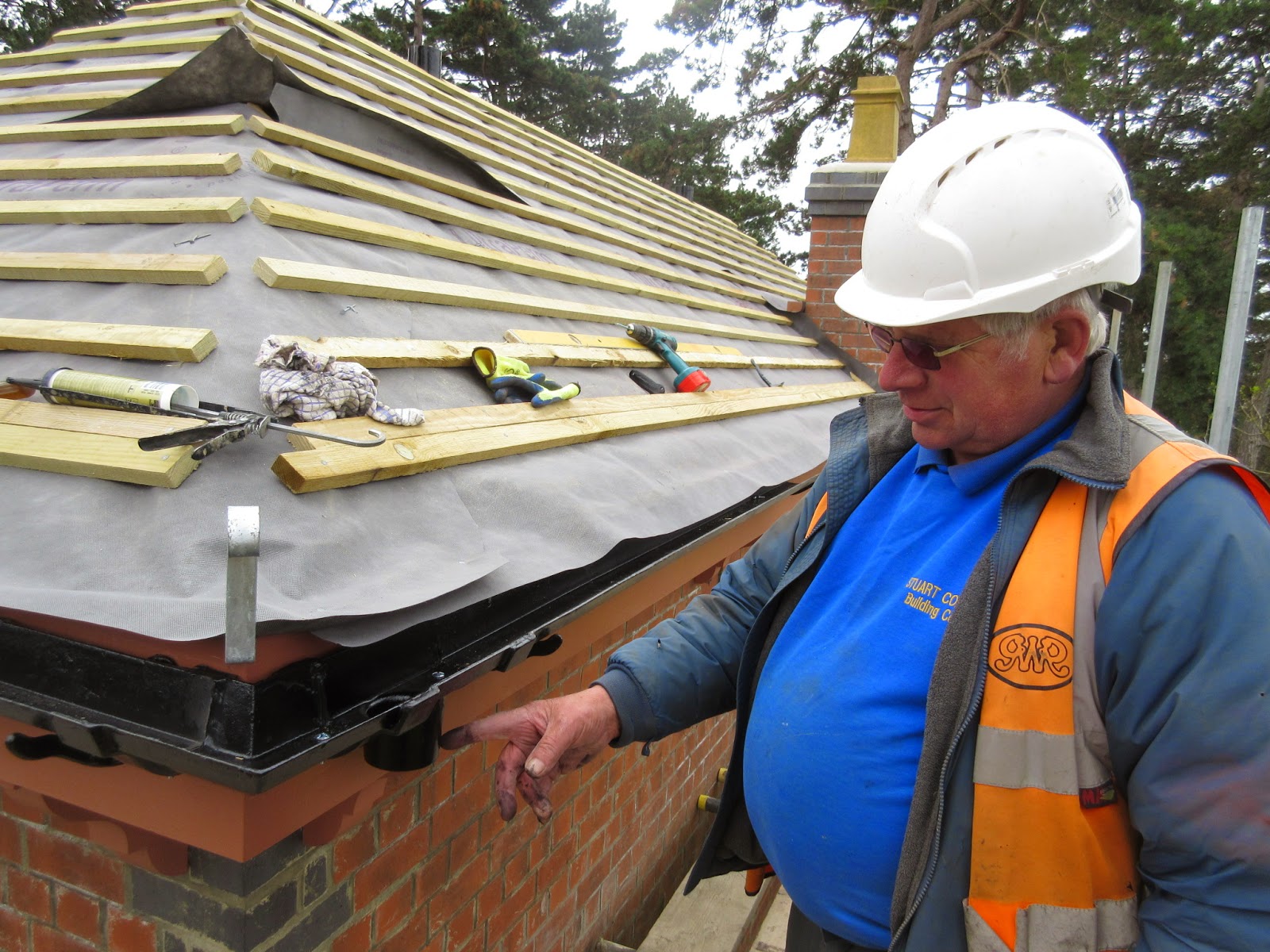 The fitting of the cast iron guttering was the next job to be completed, with all of the correct parts finally to hand.

Here JC applies the mastic to the joints and the Box takes another step to completion. 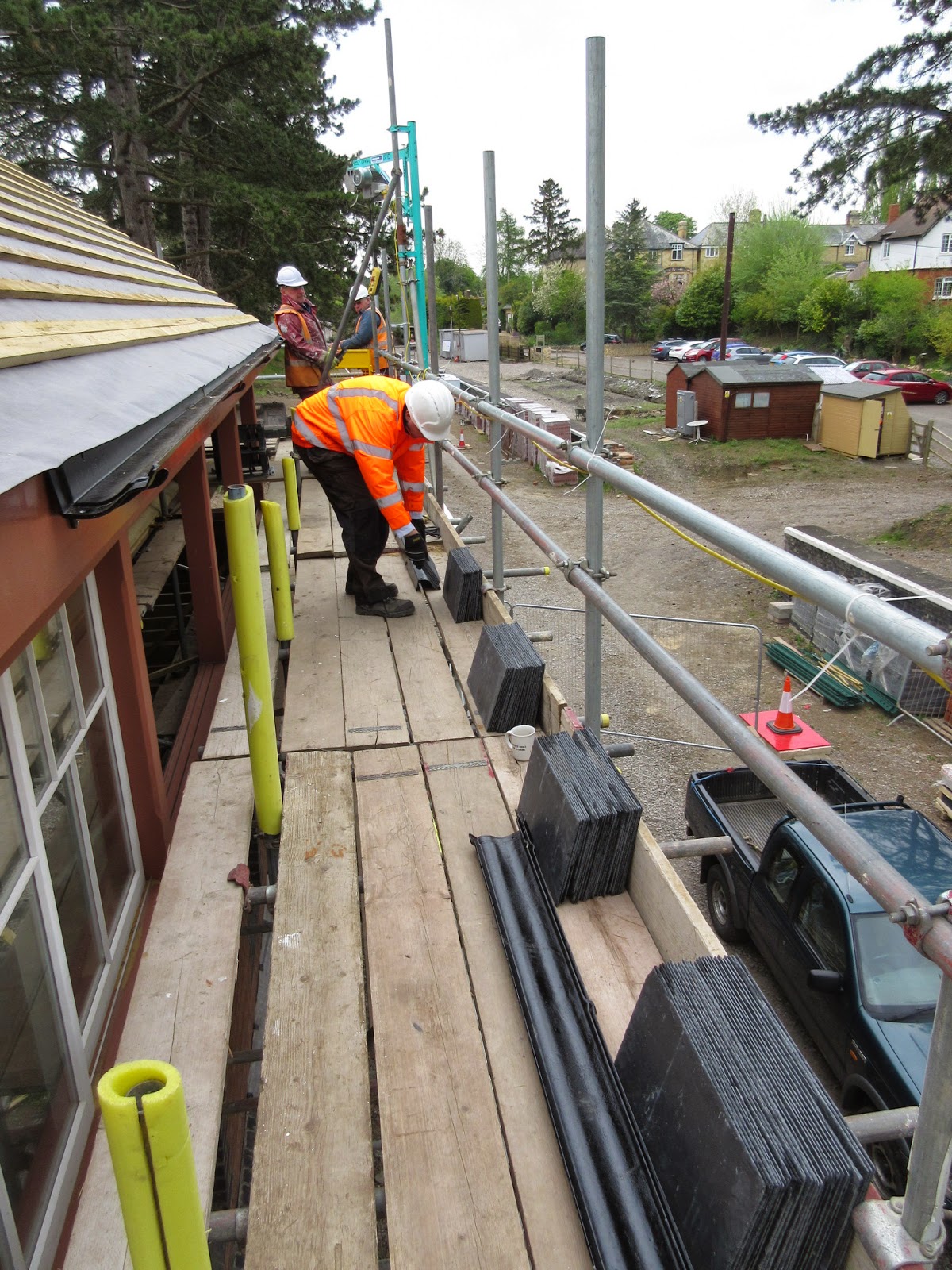 A pallets worth  of slates was lifted to the top of the scaffolding in anticipation of starting the fixing next week. Here the slates are stacked neatly around the edge of "top floor" by Phil B and Clive. Personally I cant wait to seem them in situ and the scaffolding removed. 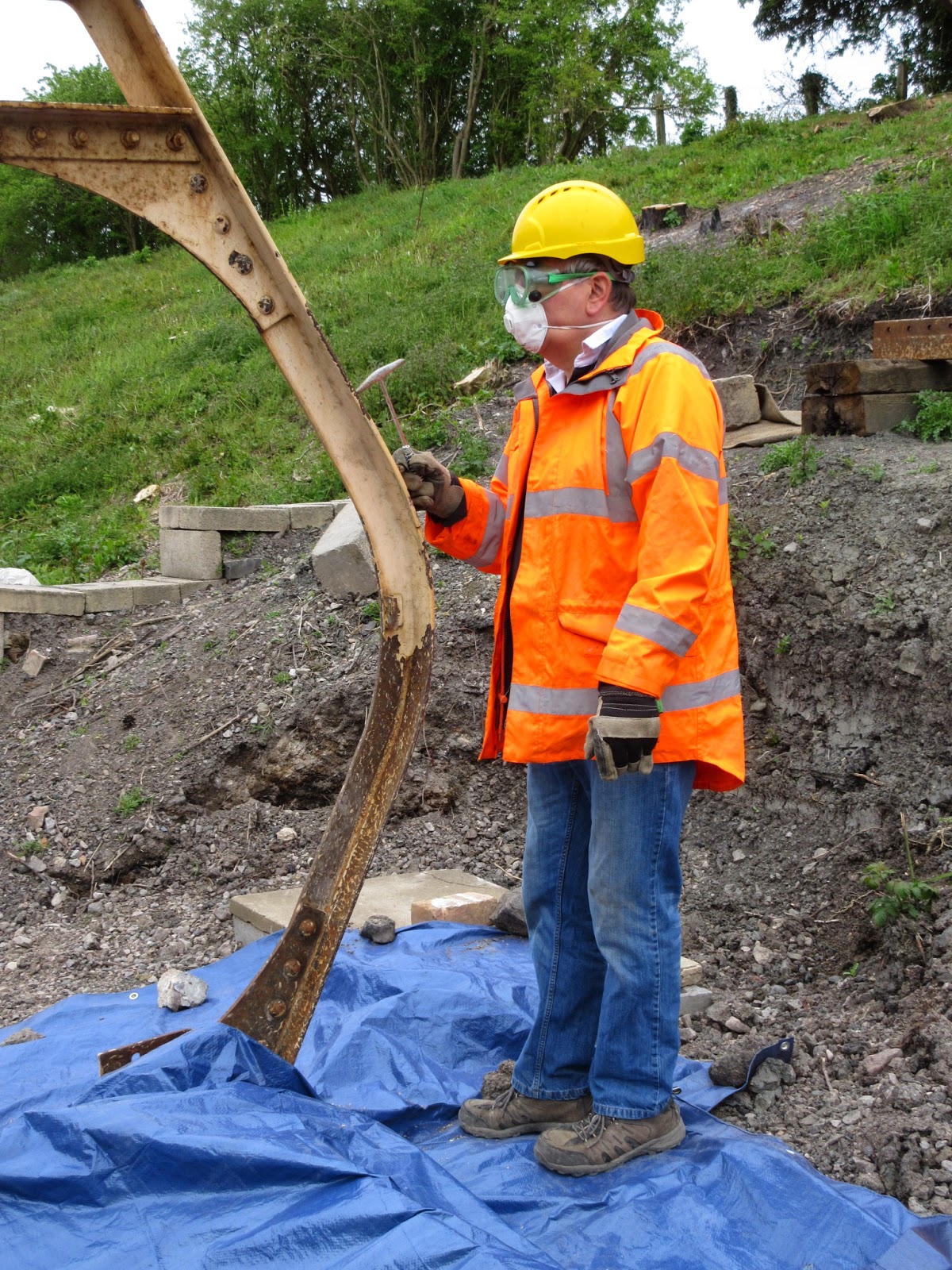 Work was continuing at a pace at the northern end of the site on the footbridge. Peter K was wrestling the old rivets out of the roof support hoops, now removed from the old towers,
Here Keith  G is on the painstaking task of removing all of the old paint. 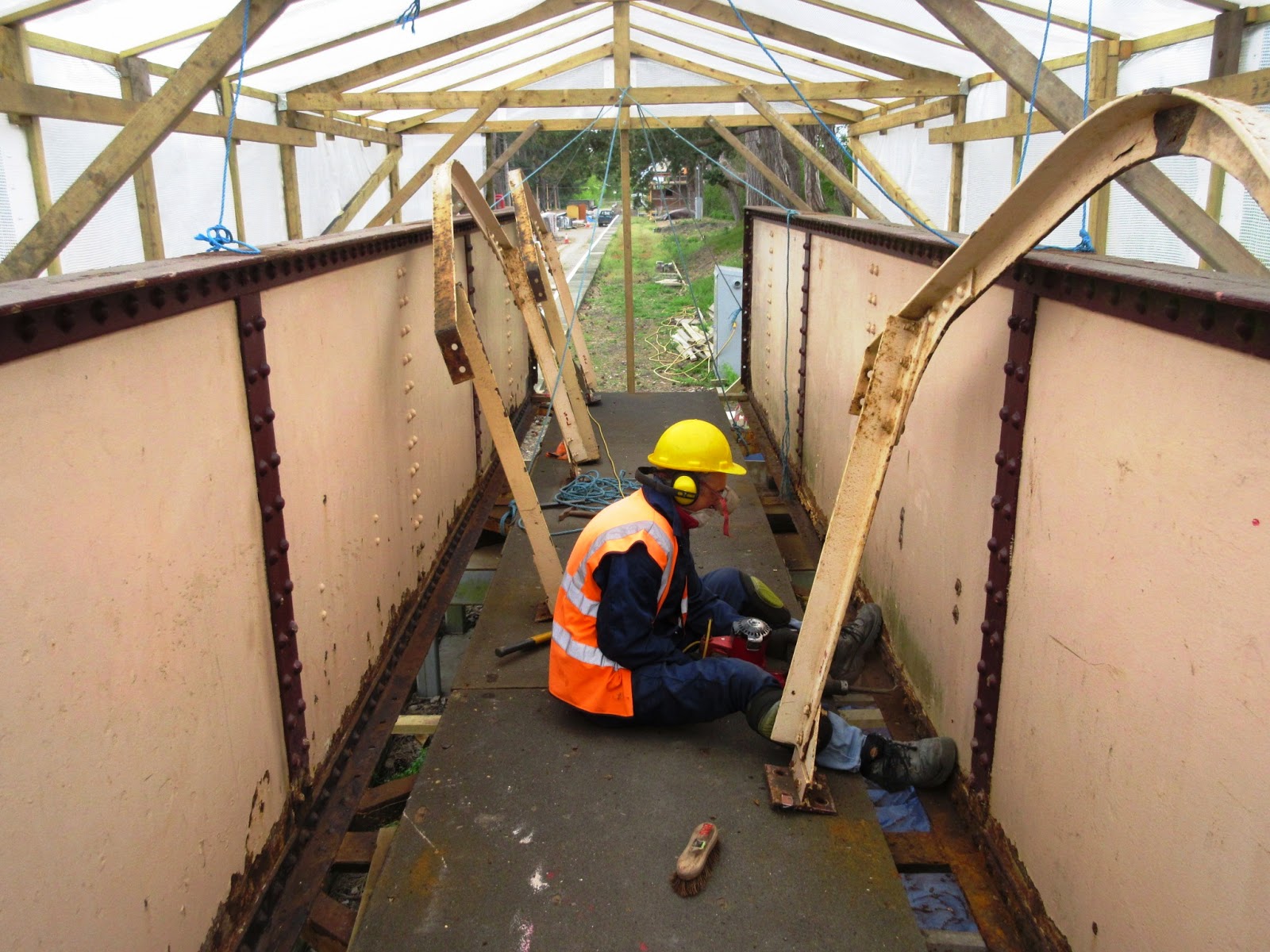 Similarly in the footbridge span shelter, Roger J was chipping the rust out of the joints with the Hilti. Both jobs set your wrists tingling! 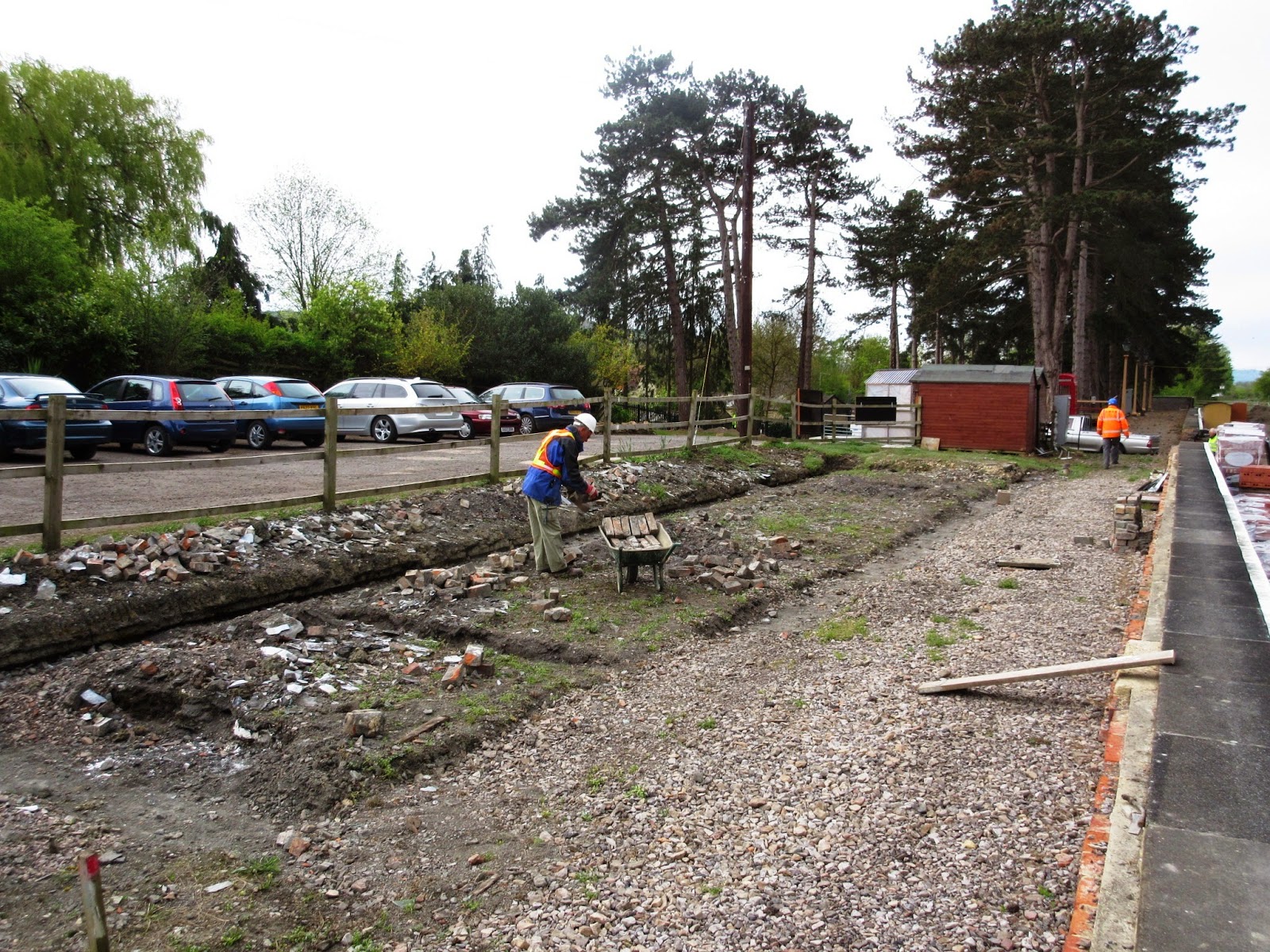 Back on the  old Station foundations Ron and Phil were extracting the last of bricks for future use. 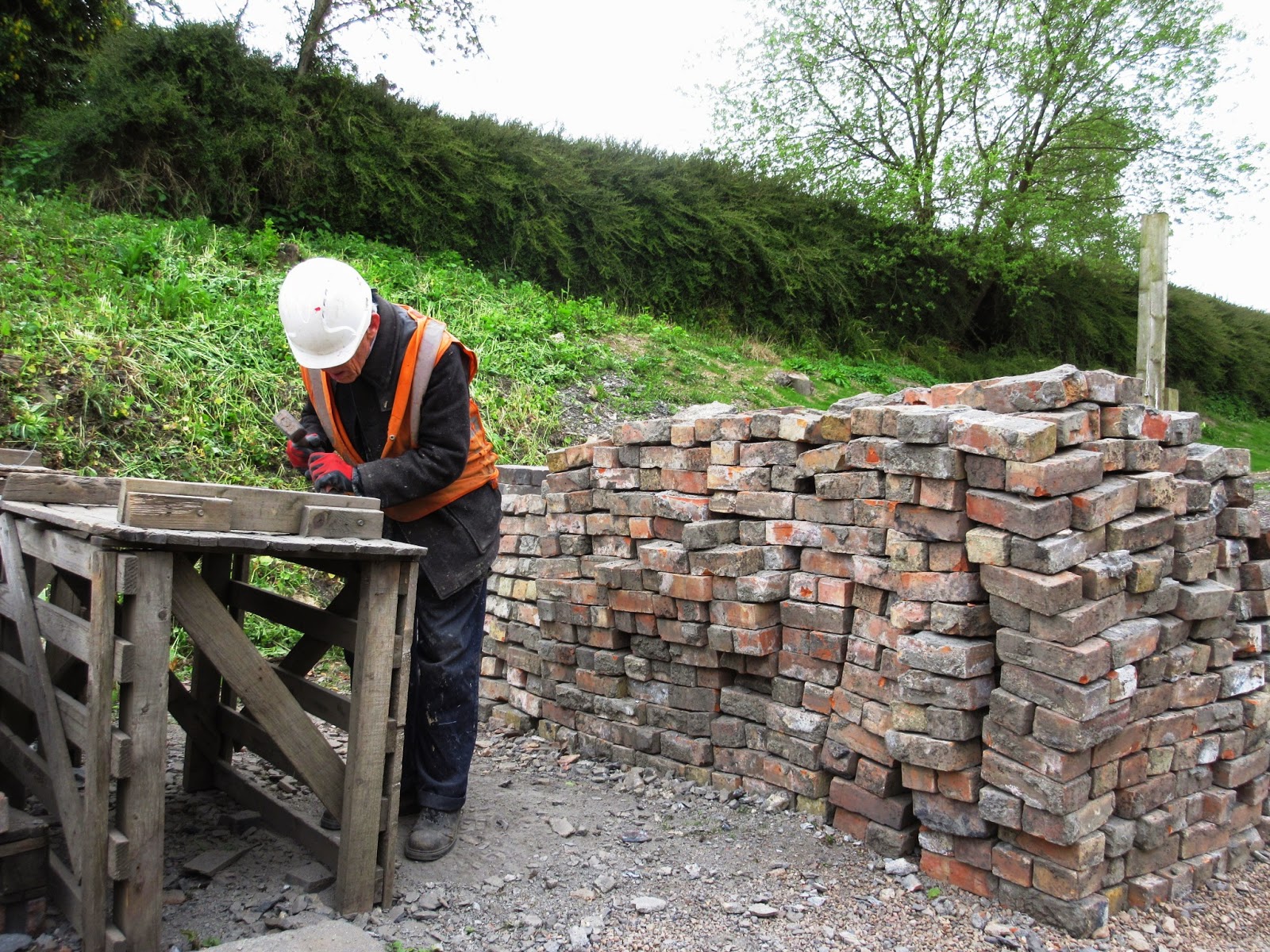 I'm not sure that Robin was particularly pleased with their efforts - he feels obliged to clean them! 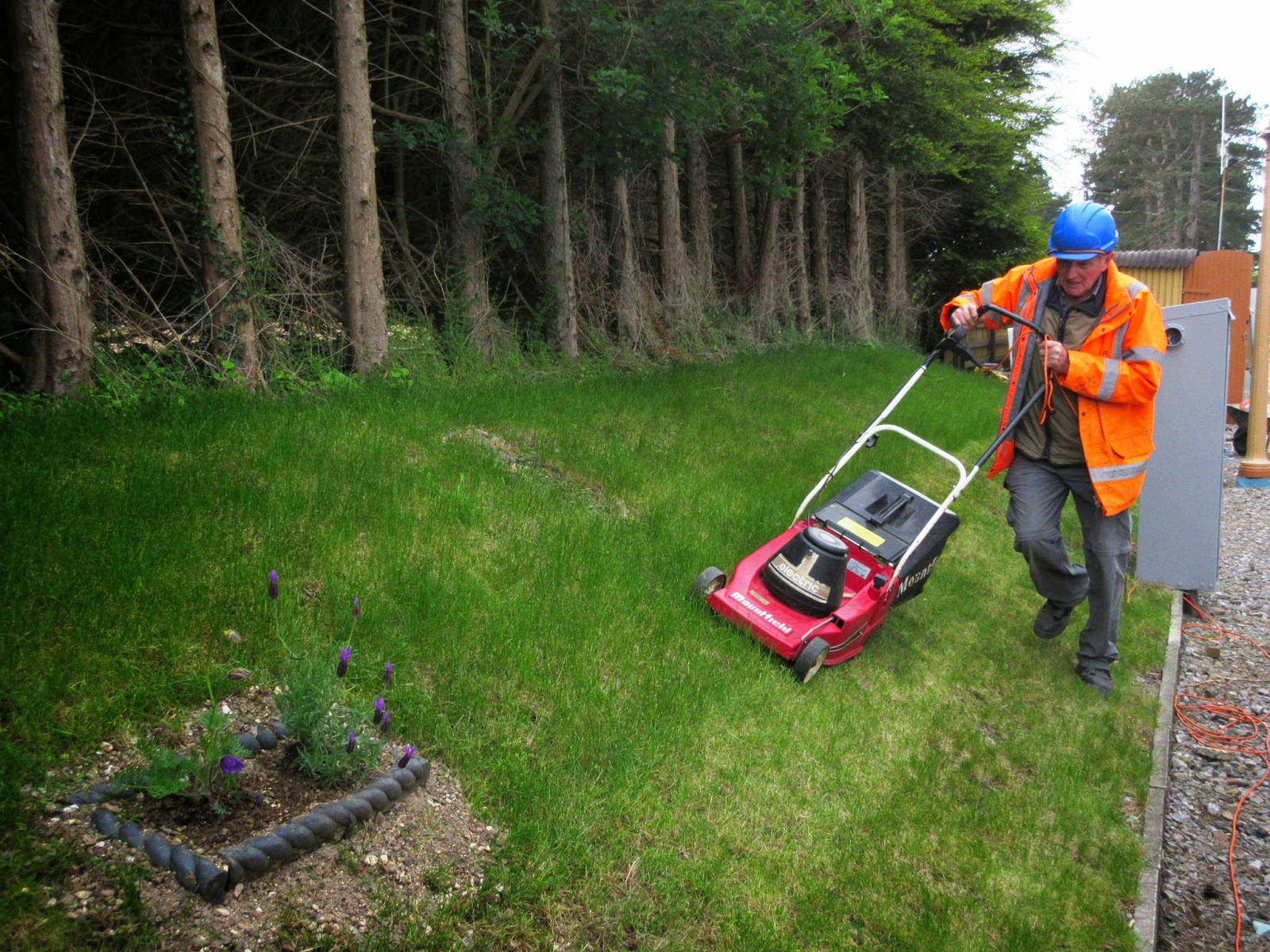 The  efforts to keep the place neat and tidy continue. Here Jim H is defying gravity with his mower - stripes optional Jim! 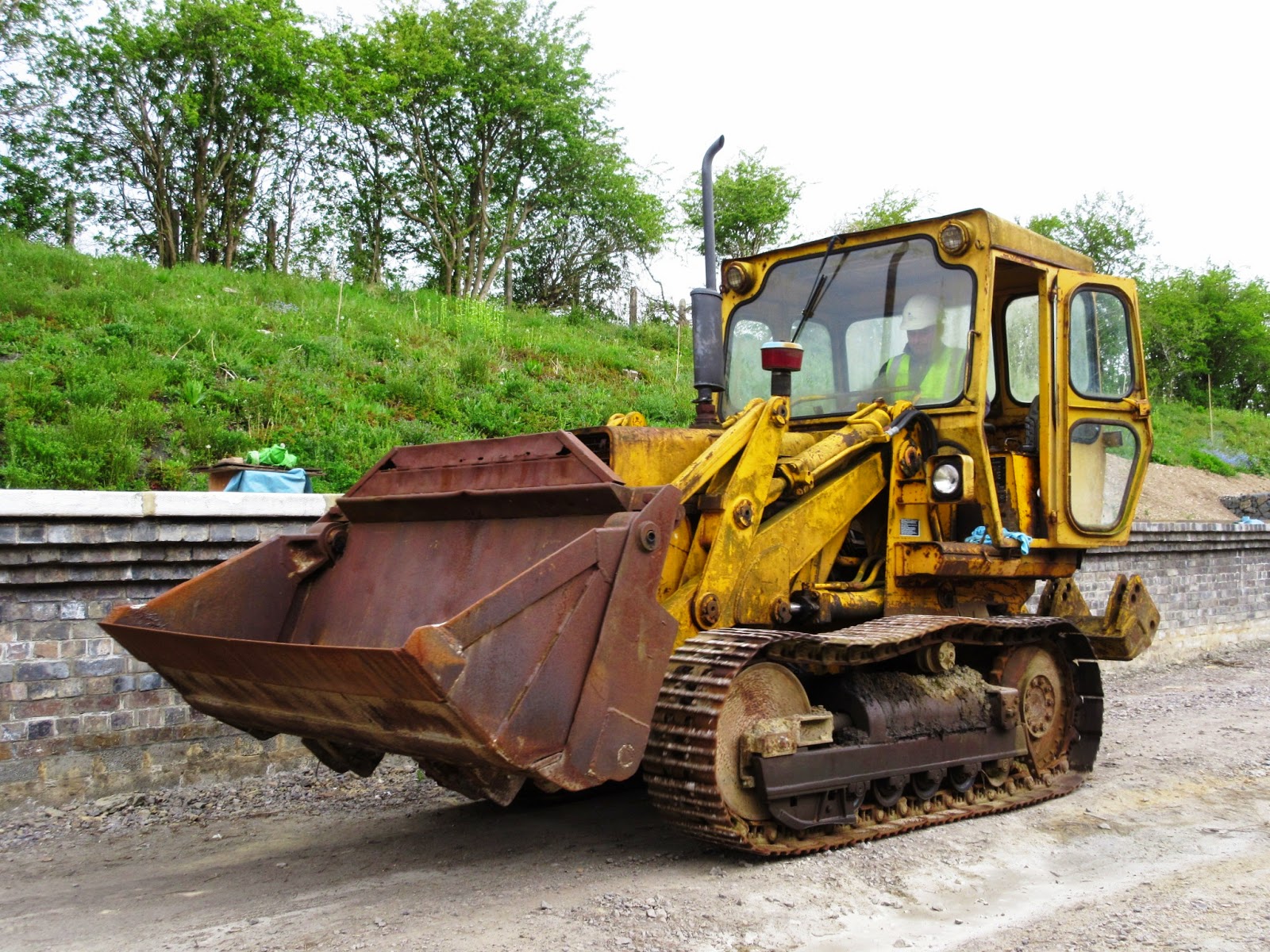 An old friend is in the process of being removed from site this week. Our old friend "Dot" the  Drott Shoveller is being put out to grass and restore by Chris Capaldi. I have a great affection for the old girl - we didn't use her much, but she was a symbol of progress 4 years ago and raised my spirits. It was a bit like having a Sherman Tank going up and down the track bed however! 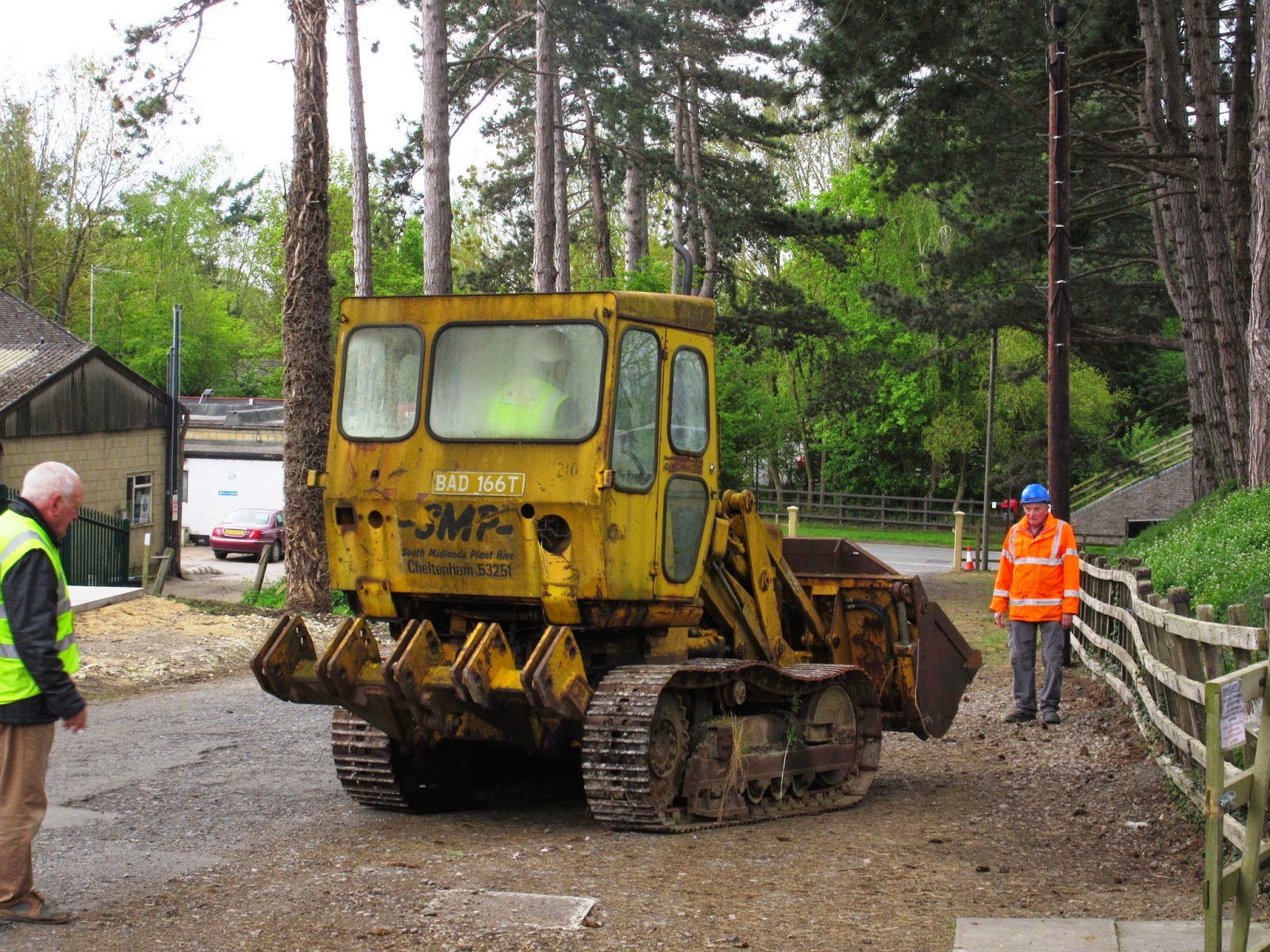 Nice touch, even the fence waved goodbye to Drott. lol
Looking forward to popping in on the 13th for a look.

When the scaffolding is removed from the signal box is it the intension to build the missing section of platform with the tunnel for the point rods and signal cables?

Also when the platforms are surfaced what will the material be, tarmac, slabs?

Keep up the quality work,

Hi Graham,
We will crack on and fill the gap ASAP. We will be tarmacing the platform in this area.
Bill

Is the Broadway Signal Box sign the original or a copy?

Re Dot: when you say "put out to grass and restore by Chris Capaldi", I take it that means she's to be refurbished, not scrapped? Yes, sad to see her go - but her time of usefulness at the Station has apparently passed...

I have admired the BAG groups work for years since the start of 1A. You are heroes of Preservation.

To help you and Broadway Station get the GWR roof it deserves I have emailed the Chairman today and pledged 250 GBP to any fund that might be started to make up a funding shortfall. You should see the pledge on the Boardroom Blog shortly.

I hope this support, and any other you receive. helps your discussions at the AGM.

Hi Bill,
I would like to echo Dave's comments about the plans for the roof at Broadway station. After all the dedication and perseverance by the BAG group over many years to get Broadway station where it is today, it seems a shame not to continue in the same spirit with at least the visible parts of the station building.

I have been financially supporting the rebuilding of Broadway station from time to time, and I would certainly be very willing to put extra money in towards a genuine GWR roof, following Dave's example, to match his offer.

Get the trains running to Broadway and bringing in income as soon as possible, but I would be sad to see this accomplished at the expense of building a station roof "on the cheap", because it's quick.

I shall keep looking at the Broadway blog each day to marvel at progress, whatever the weather - one of your 40k regulars!

Dave and Steve,
Thank you so much, we need to do whatever we can to ensure money isn't an obstacle.