Hot, and now breezy as well...

The day started off really rainy, perhaps putting off a number of people, as there were only 8 of us today. The Pershore auction certainly drew a number - I wonder what they bought? Any kit for us? 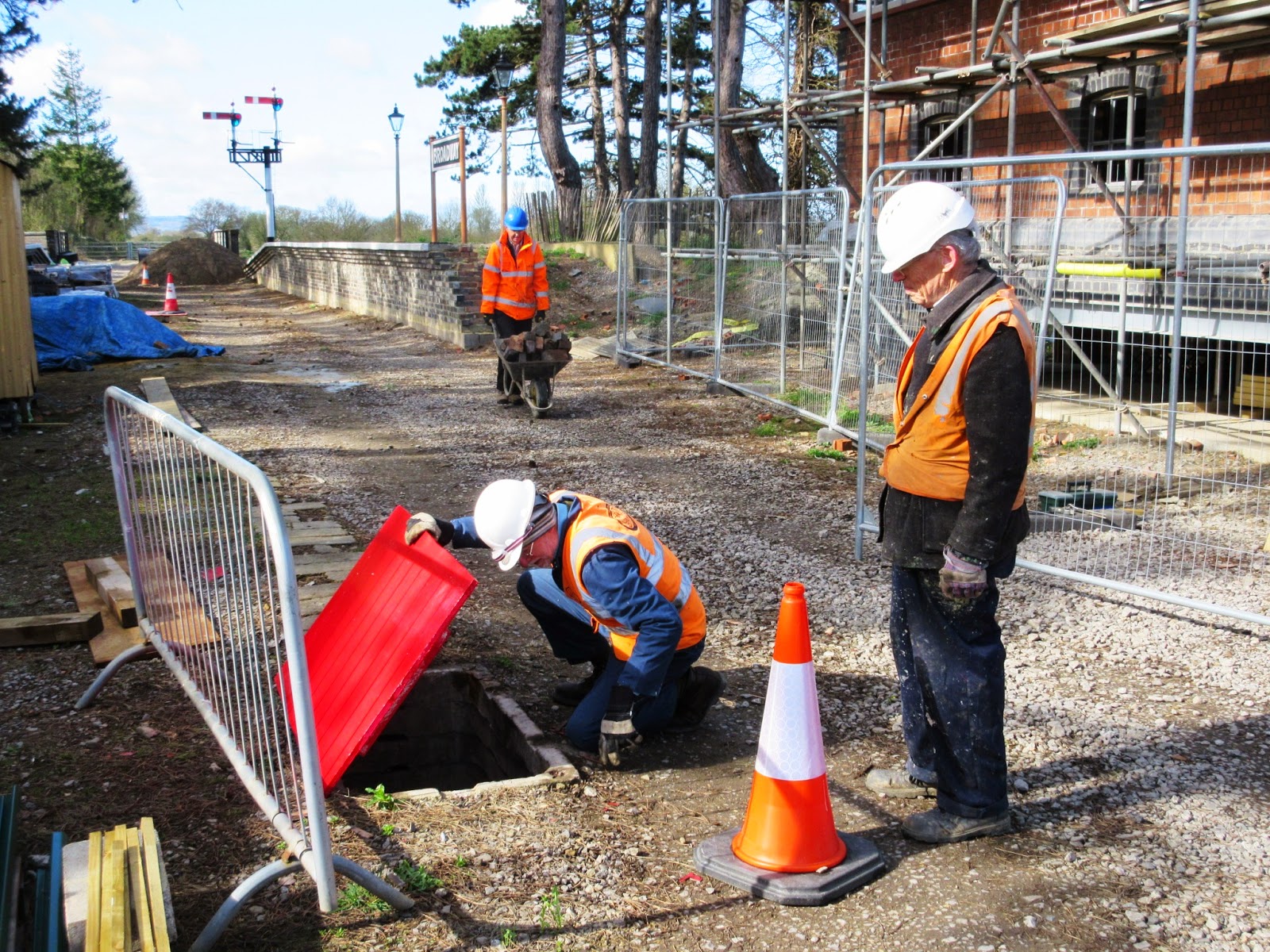 The site drainage was once again a matter of activity. The new catch pit covers are now ready, and during the morning a number of them at the southern end of the site were fitted. Each catch pit was also raised by one ring, to make them more obvious and limit the risk of a vehicle running over the top of them. We also put a cone on top! Can't go wrong now, can it? 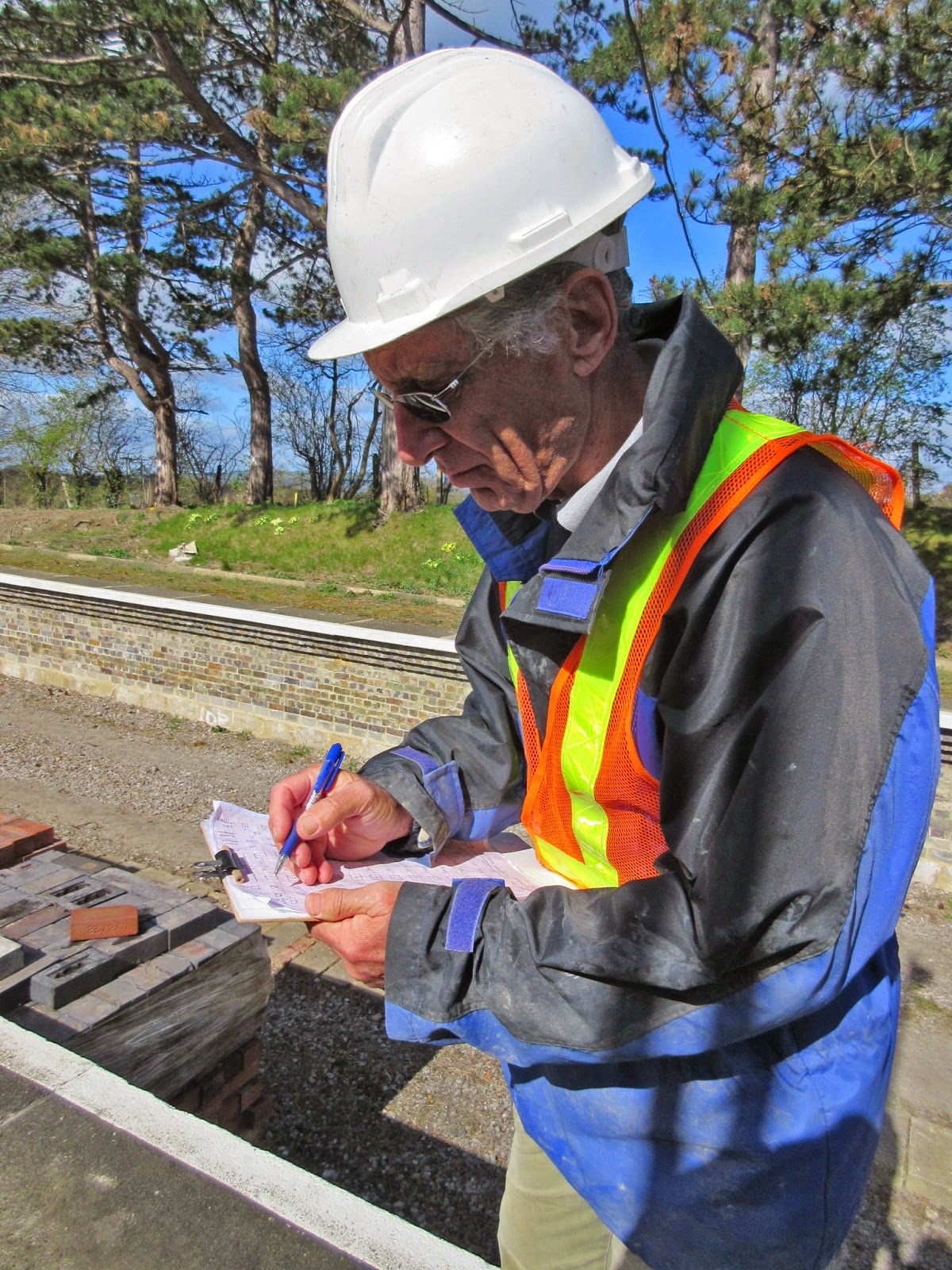 A second group set off for the northern end of the site, and rodded through the last drains up to the fence. They report that there is only one obstruction left now, all the others are clear.

Here we see Ron with the rather satisfactory task of checking off the last catch pit on the list. Job done? Well, almost.

What now then? The dumper is currently garaged, pending a professional service which it is long due. On the other hand, there is a large pile of topsoil that is asking to be shifted, as it sits squarely on the trackbed. In the absence of mechanical assistance therefore, we threw manpower at the pile, and a fleet of barrows. 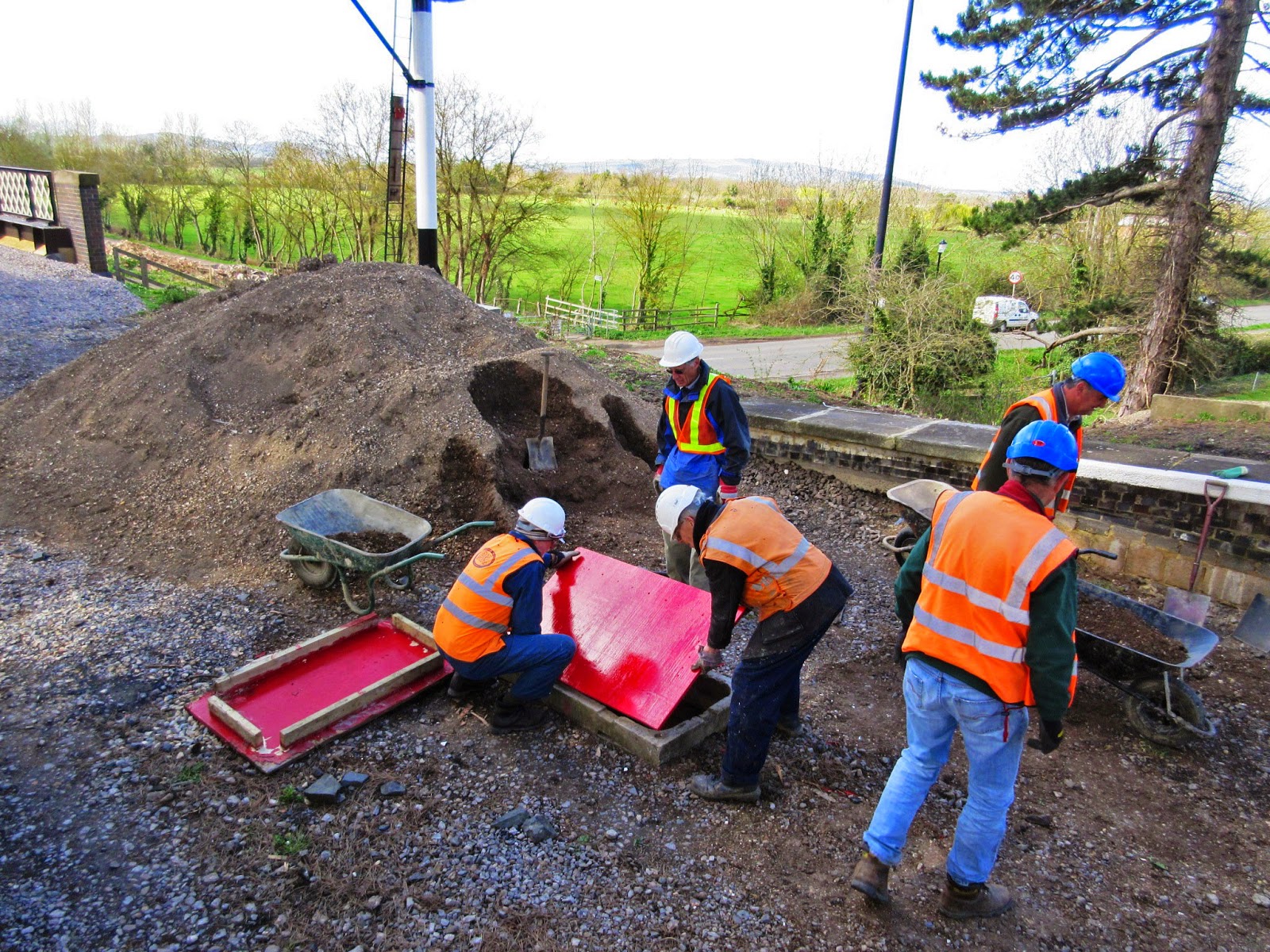 Here we see the catchpit team by the signal post, and the topsoil team in the background. That pile got a lot smaller today, but there is lots to go. We barrowed the stuff uphill on to the top of the middle of platform 2, then along a bit and tipped it over to the side, to make a nice level bit of topsoil, ready for seeding with grass. This has worked really well along the slope behind 1c, where there is a definite green fuzz appearing. 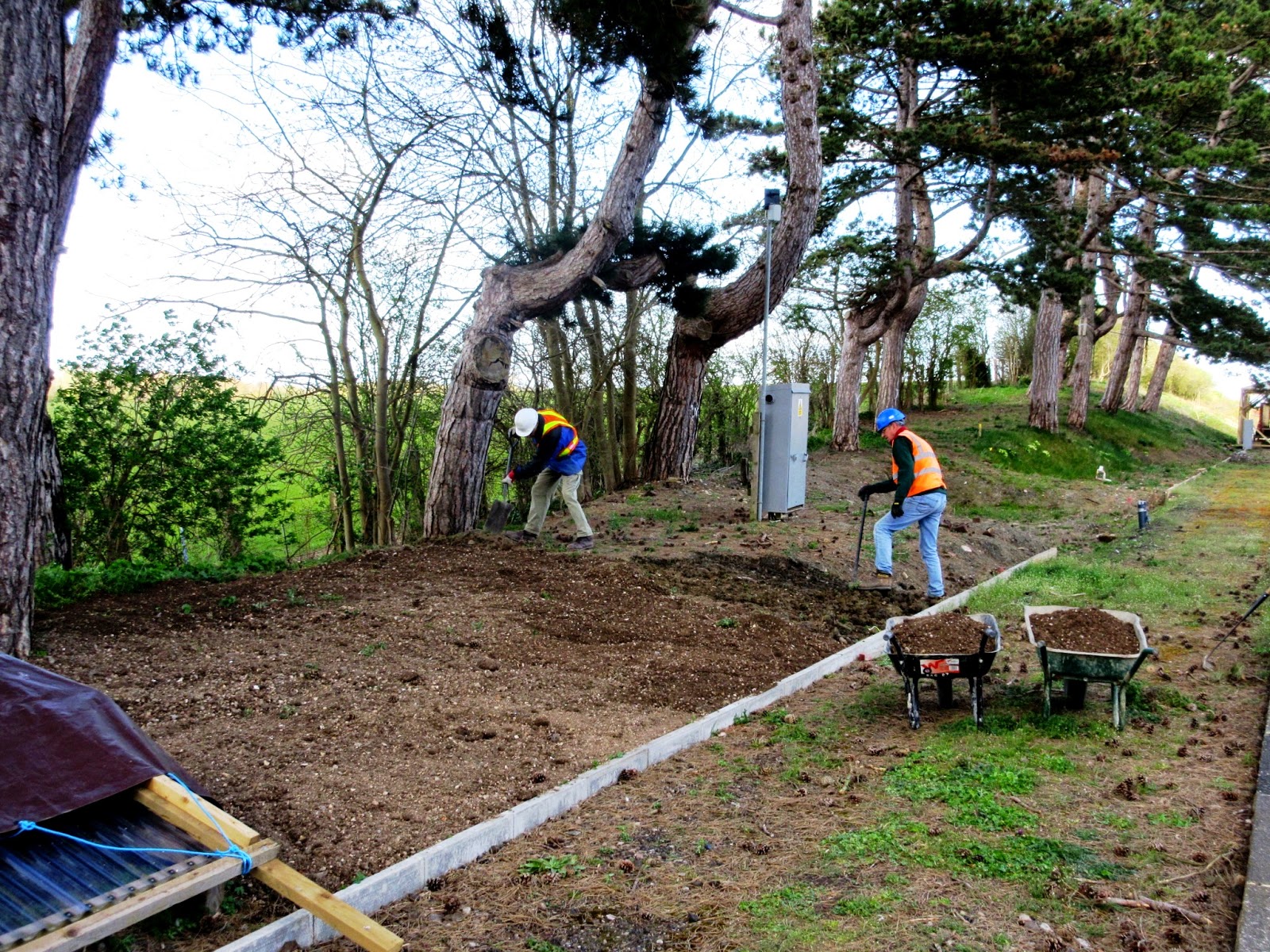 Here we see Roger levelling out the bumps, ready to make a nice flat lawn area here. We almost got to our intended target, the grey electrical box, beyond which there will be much digging and building for the platform 2 waiting room. In total, we covered about 20yds with topsoil. Unfortunately we could not seed it immediately, as it was too breezy and the seeds risked blowing away completely. Perhaps Wednesday will offer a calmer opportunity to do this. 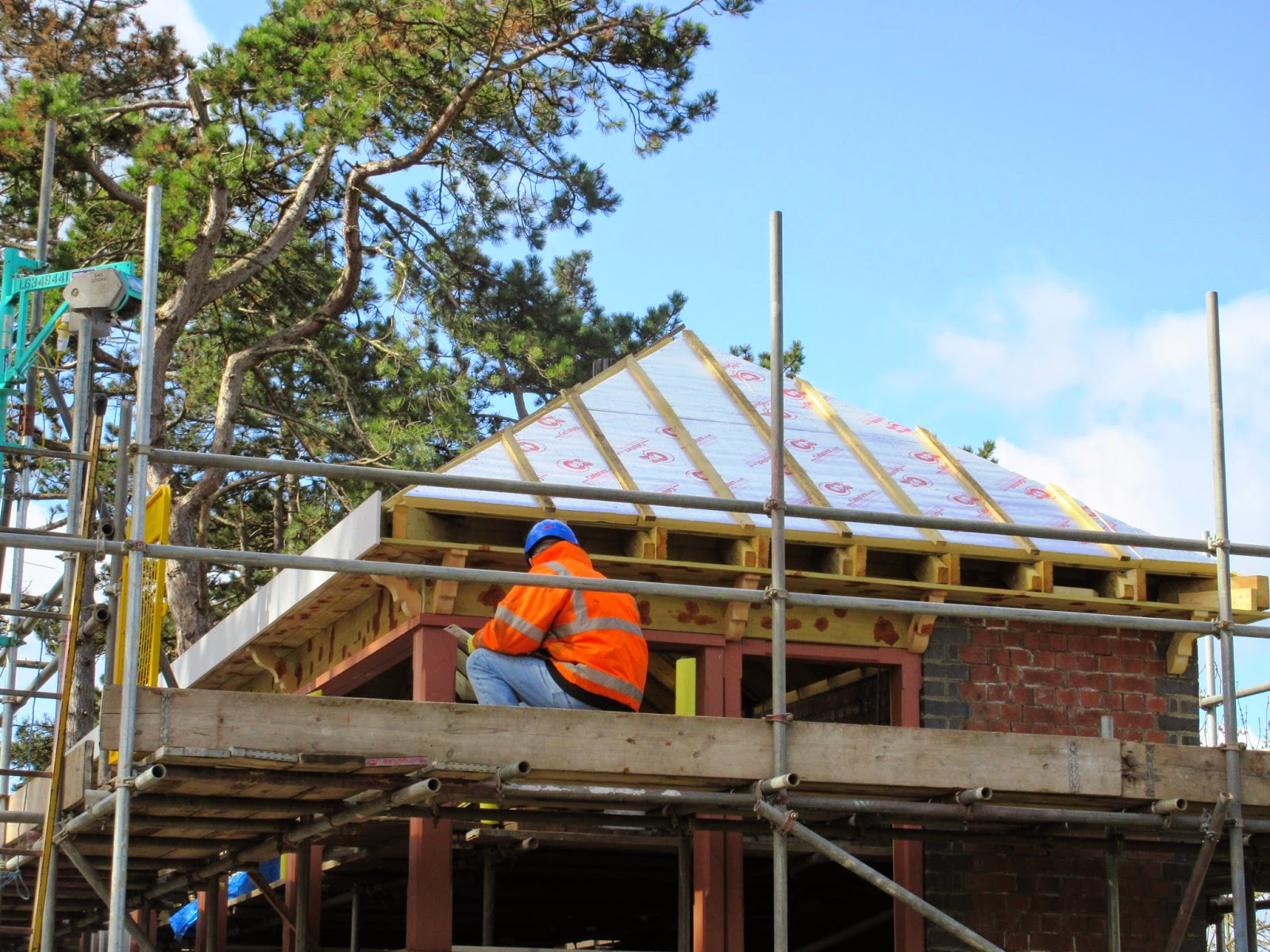 A small gang also climbed up on the signal box. Their job today was to fill in the holes left by the nails used on the soffits, and also fill in the cracks from the knot holes in the bressumer beam. 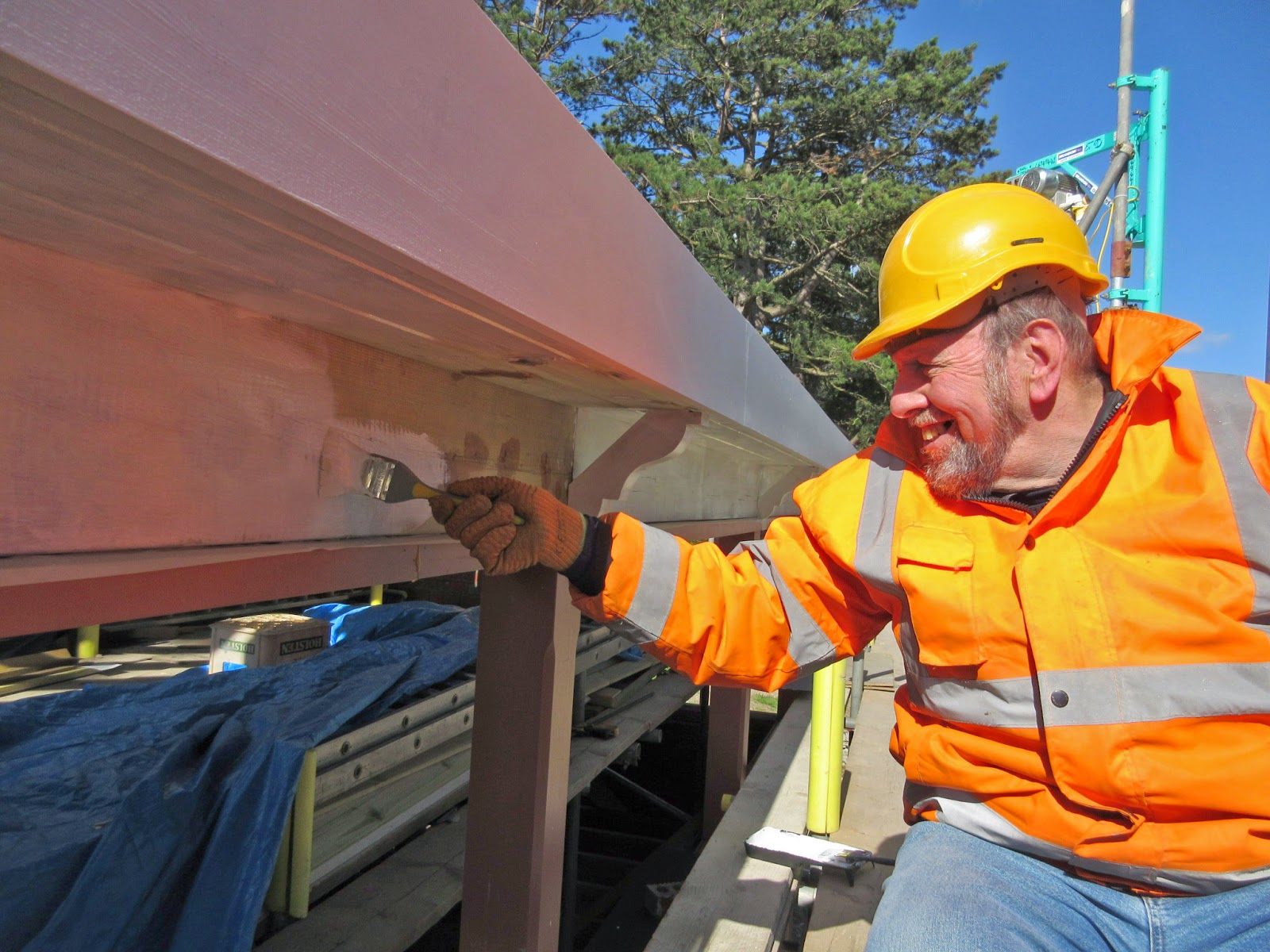 Once all the holes and cracks had been filled, a coat of primer could be applied. This looked to be quite an enjoyable job up there in the sun, judging by the grin on Peter's face. The soffits, bressumer beam and sculpted brackets on the three sides were all put in primer. 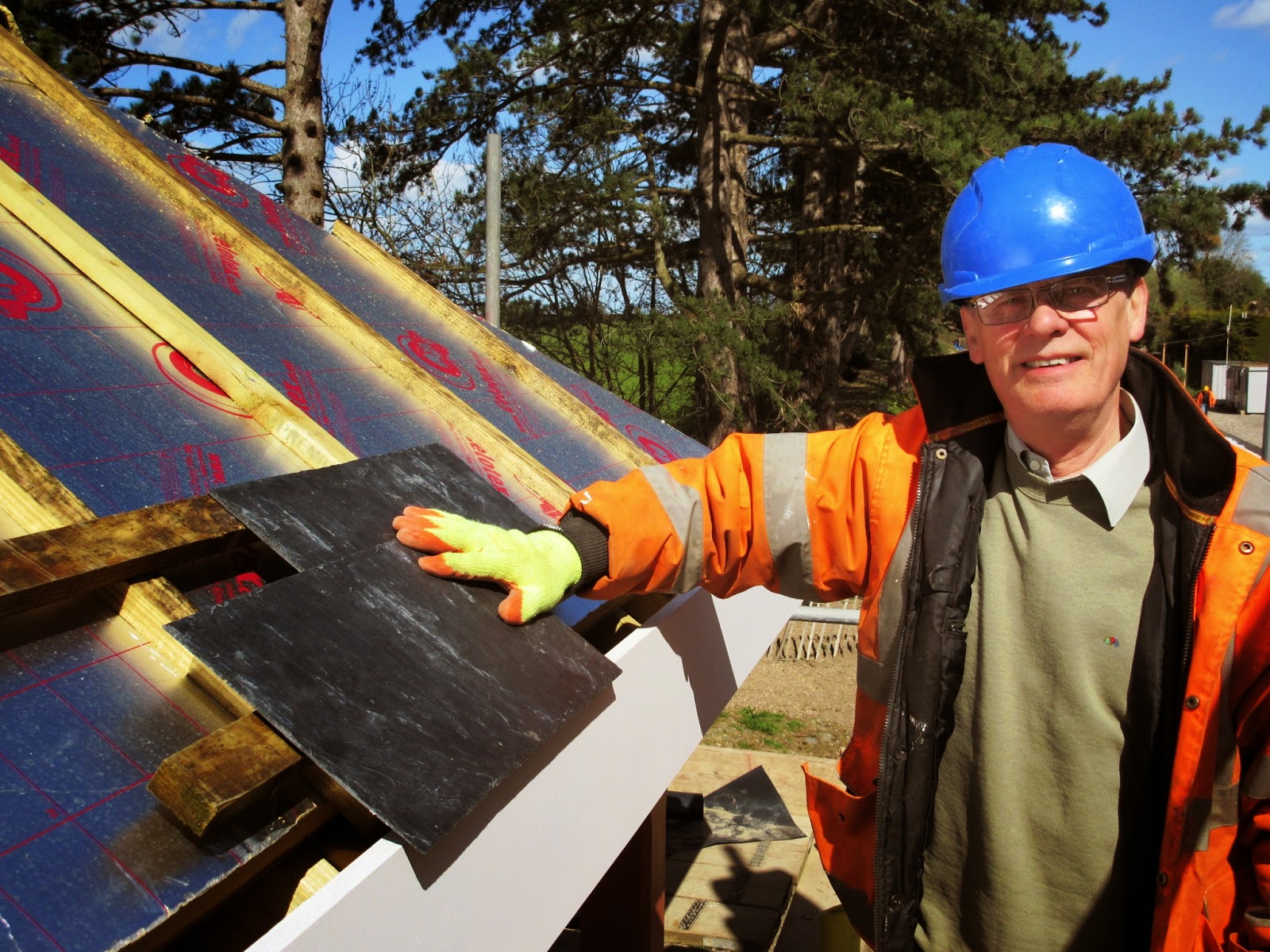 On the subject of grins, how about this one from John S? He's a happy man, because today was the day the sample slates arrived. A great day !

For our readers, we have assembled a little test area to show how the slates will go on to the roof. The colour is good, and it matches well the sample ridge tiles that we have.

We will carry on with the T & G boarding on Wednesday next week. That should enable us to cover the roof completely. Then the insulation sheets on the rear, and we can start on the battens for the slates, now that we can see how they will sit. After fitting the guttering, to be made of genuine cast iron, the scaffolding can come down again. 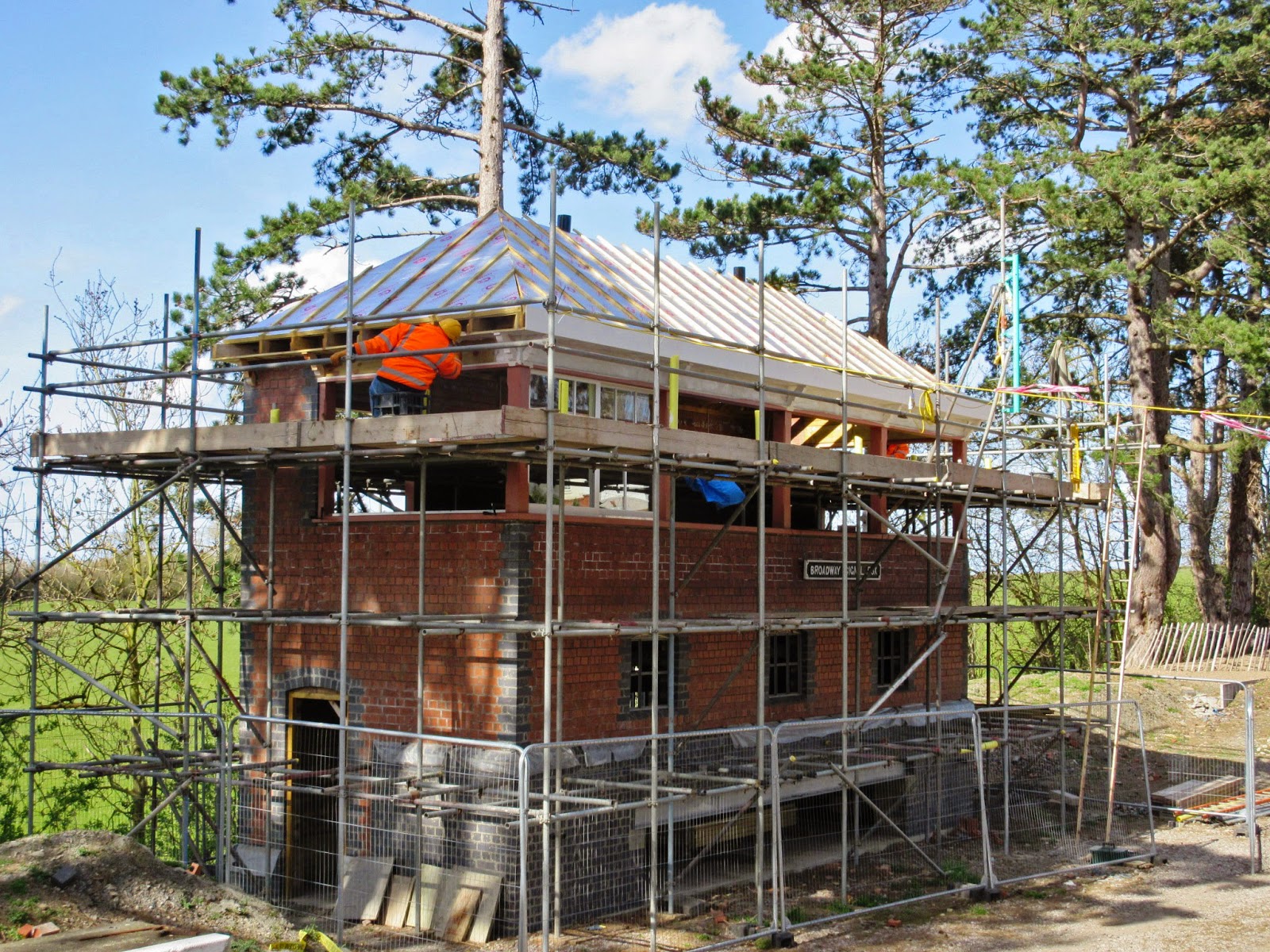 Near the end of the day, here is our summary shot of the signal box. You can see the primer along the front, and Peter applying it to the southern end as well. The front also has the fascia board fitted. 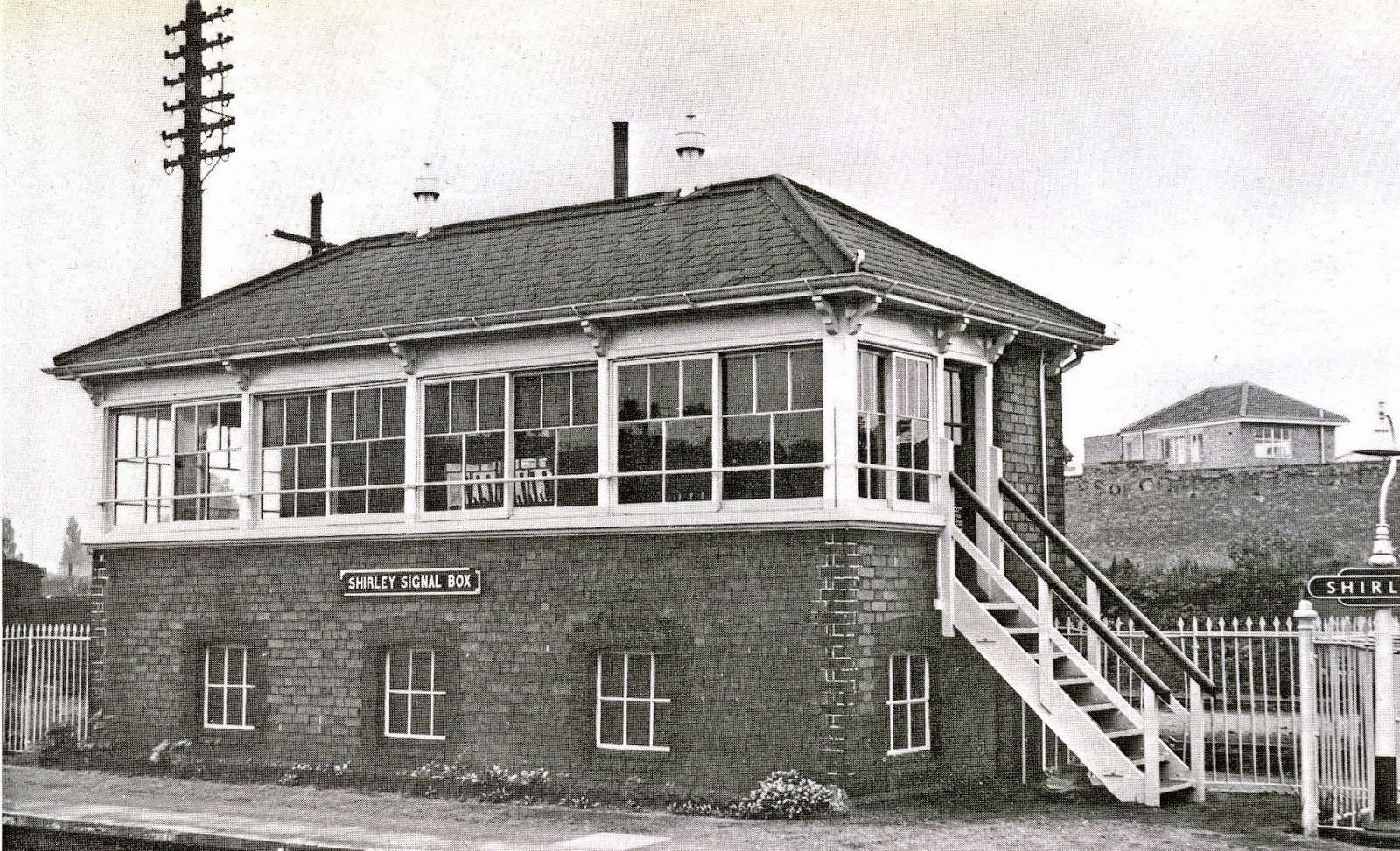 To compare, readers might be interested in this picture from British Rail. It shows Shirley box as it was (now sadly demolished) and what we are trying to reproduce. We're not doing too badly, don't you think? Only the end window has been missed out. We have also fitted a real chimney, instead of the stove pipe here.The archive picture does show how much more squat the box will look, once the platform is carried over the front.

Now that we are rummaging around in the archives, what do you think of this picture of the Broadway station site, a few years after demolition: 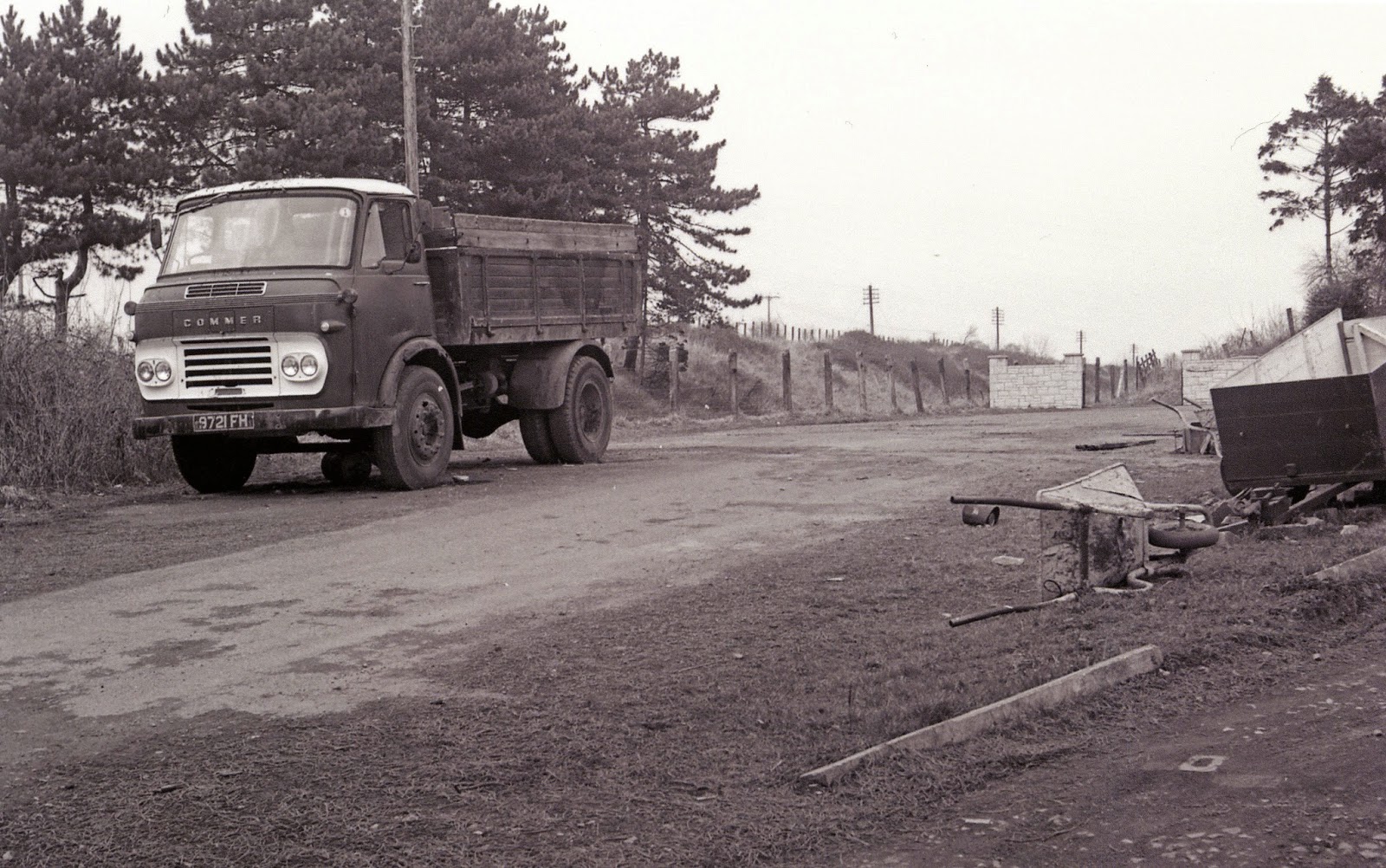 Now compare the wheelbarrow on the right with the completely decrepid one in this picture below, taken only a few days ago. Can they be one and the same? 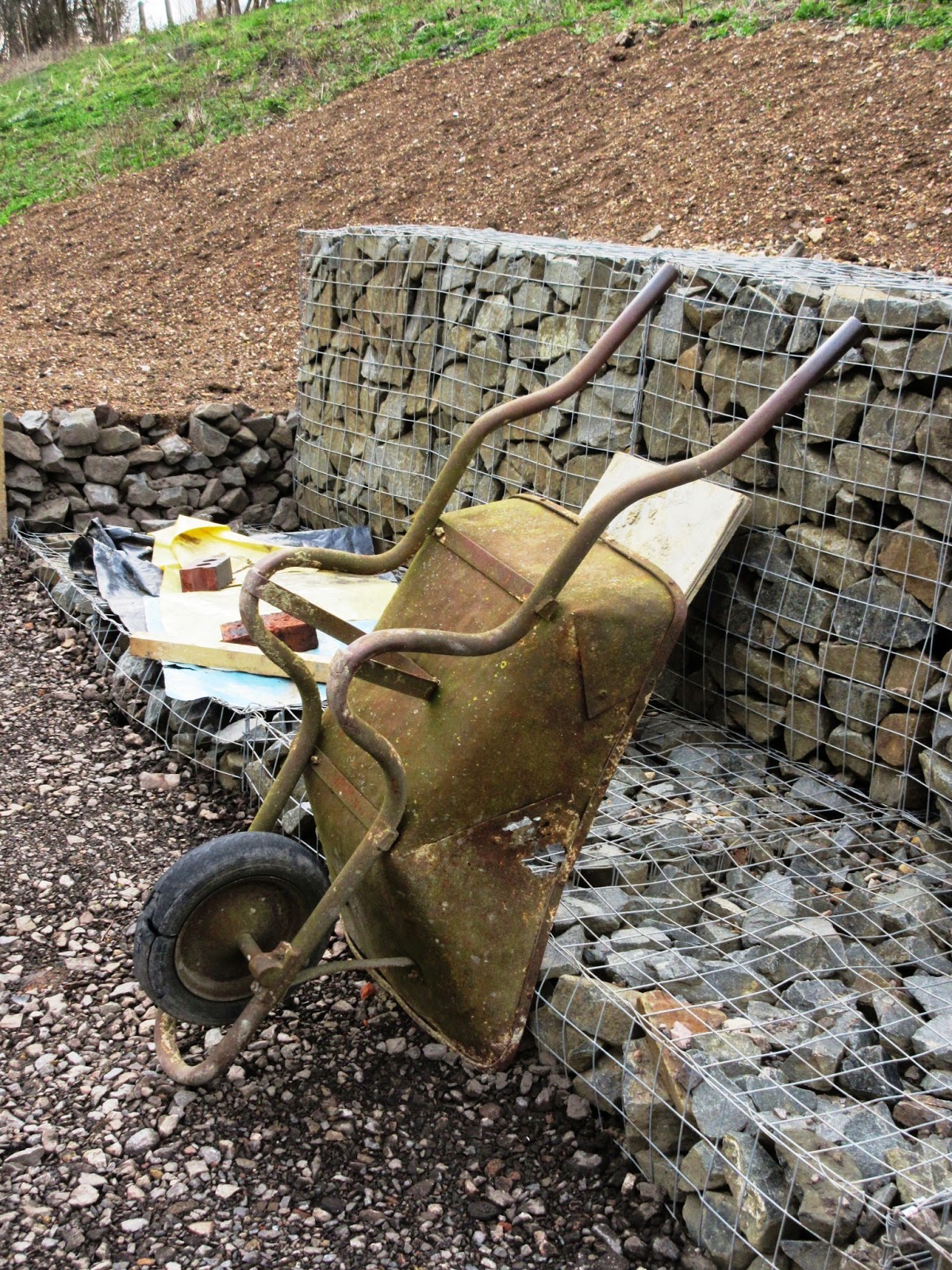 The archive picture is by Tony Harden, and was taken in the 1970s we think. Are we really using a 45 year old wheelbarrow? The tyre is a solid one, with a big hole in it. The sides are moth eaten, and you can stick your fist through them. Your blogger has discreetly taken it to the scrap pile on a number of occasions, but it is so useful that it keeps reappearing.... maybe there is a wheelbarrow preservation society out there?
Posted by Jo at 19:00

From an earlier observation, do I note Shirley box is built using Flemish bond, not English bond as Broadway signal box and platforms are?
I spent a day at the South Devon this week & 2 boxes were Flemish & 1 English bond.
I wonder if Brunel had a preference or it was just left to local builders.

I see the Shirley box used wooden steps up to it, but the planning application for Broadway shows steel fabrication. What are you going to fit at Broadway - wood or steel? How will the floor be finished - T&G floorboards or perhaps lino on top (or the modern equivalent)?

Peter Lee: Best wait and see eh? All will doubtless be revealed in due course and I'm sure it will be good, given the Team's efforts thus far.

Peter Lee:
The floor will be T & G boarding, with lino at a late stage just before it goes into use.
The steps are not urgent and will be considered until later.

Much as I’d like to think your existing wheelbarrow has survived from the 1970s I don’t think it’s the same barrow. The existing barrow has a U shaped strengthening strut underneath connecting to the two resting loops whilst I can’t see any in the archive photo. Unless somebody welded it in later?

Keep up the good work!
Martin

Great to see all the progress going on at Broadway Station. Good effort all you lads and lasses :)

Nice reminder of yesterday's road transport, too, with the Commer VA 7 ton tipper truck. Gloucestershire registered. Wonder where that is now? Razor blades, most likely, I suppose.

The trackbed and station sites had only just been bought from British Rail, and I think we were the first GWRS people at Toddington after the sale had gone through.

As we drove cautiously over the ballast I remember peering through the windscreen of Mike's MGB, and saying "What's happened to the signal box?"
I had noticed the steps had disappeared.

We rushed over to have a look, and discovered that not only had the steps gone, there was a big hole where the lever frame used to be.

The frame had been sold to the Gwili Railway a few days previously by another department of British Rail, which didn't know the GWRS was negotiating to buy the whole line.

I'm not actually sure if the sale of the lever frame officially included the steps - but the Gwili Railway took them, anyway!

That's why Toddington signal box now has steel steps. It was possible to get a set of steel steps fabricated relatively cheaply, while making original-style timber steps was a much more expensive job. In those days, it was often a case of "Do it cheaply - or we can't do it at all."

Another thing I recall from that day in 1981 is that Mike Shorland decided to take the locking room door home to refurbish it. There wasn't much point leaving it on the signal box - there was nothing left in there to steal. So we took the door off its hinges and wedged it in the MGB. It only just fitted - and we drove home with the door resting on the top of my head as I sat in the passenger seat!

The early days of the GWRS were a bit 'Titfield Thunderbolt' at times, it must be said. But, as we know, it all worked out rather well in the end!


All this makes me wonder if now might be a good time to get *two* sets of Great Western-style timber steps made, for the signal boxes at Toddington and Broadway.

It would probably be cheaper to get two sets made at once, rather than one at a time, and I'm sure a 'steps fund' of some kind would raise the cash soon enough if it can't be found from existing budgets.

After all, Toddington box has waited for a set of proper steps for 35 years now. With Broadway box progressing well, it's the best opportunity for decades to get the job done at last, I reckon.

Michael, that was an excellent post, real nostalgia! Just shows how far the GWSR has come.

Michael
What a very interesting trip down memory lane! Thank you.I have been below parr for a week or two and it cheered me up no end!

Bill, Are you still working at Broadway and do you write some of the blog too?

Whilst you are at it, Winchcombe SB needs wooden steps making too!

Aaron,
Back in the saddle shortly.....