It was a tough old day today - plenty of wind and rain in the morning and wind and dropping temperatures in the afternoon. There were 18 volunteers on site today and 3 contractors from George Law fixing the slip. Jo did us proud today with the photography !


I have to say firstly that it was great to see the bricks being laid on the Signal Box. Tony, JC, Bob W and Paul did battle with the wind in the crows nest. The scaffolding boards were lifting in the wind and Bob lost his hat a couple of times, and JC dropped his spirit level - all rare occurrences!


6 courses out of 10 were laid on the gable end corners, inside and out. The brick bat box will be the next thing to be incorporated in the southern wall under the eaves. 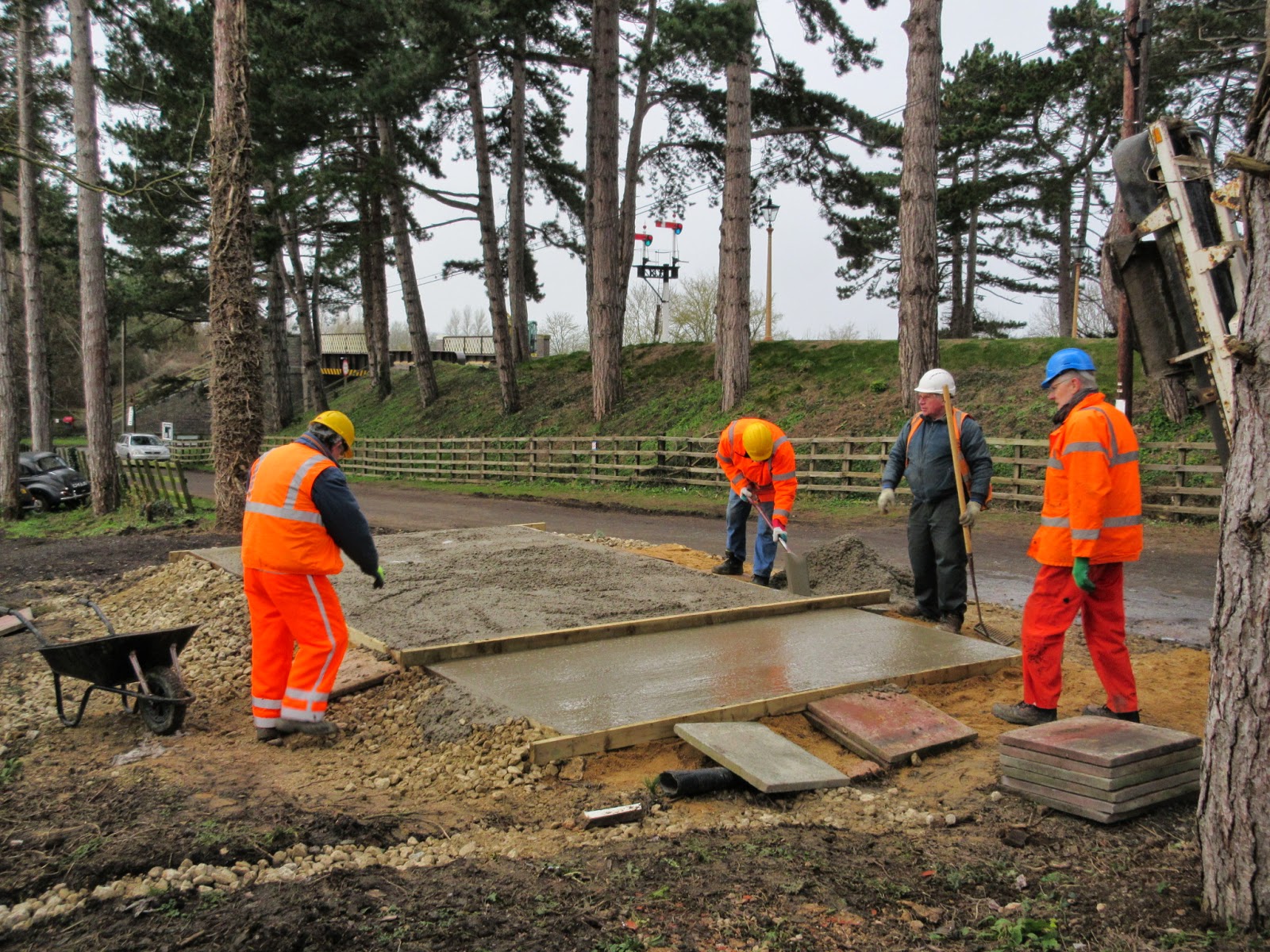 Out in the driveway the base for the new shed was being poured. from the Easymix lorry. The heavens opened at the same time which made the job doubly difficult. However it was all covered up by lunchtime  - a job well done. 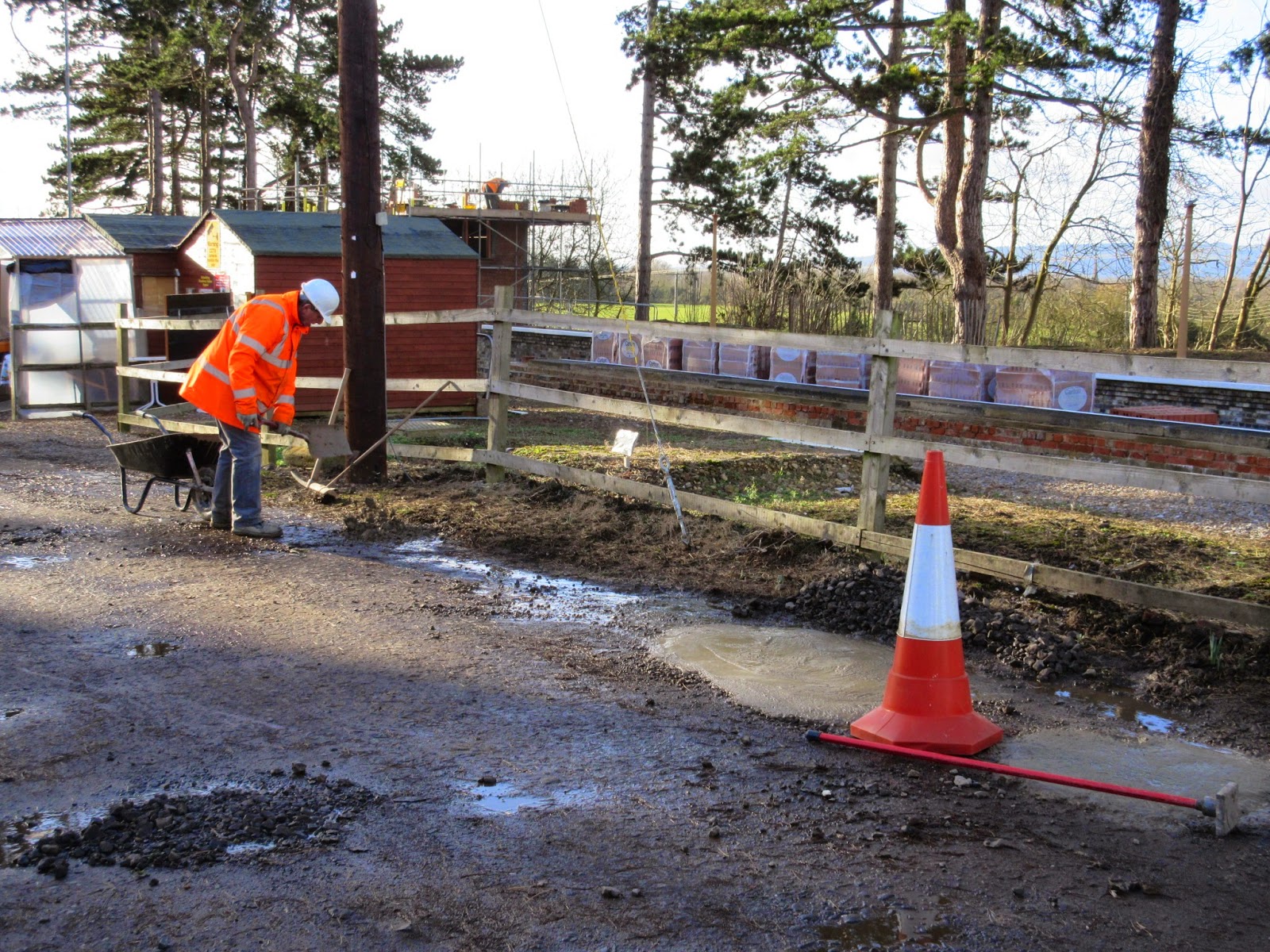 There was some concrete left over and Roger B and Rod made use of it to fill the potholes in the drive. Roger is getting withdrawal systems from bricklaying on 2C. We had to stay clear of the George Law working area today.

Over on  Platform 2B the footbridge span enclosure  continued to get the extra roof batons attached. The windy weather meant that extra care had to be taken when working at these heights. 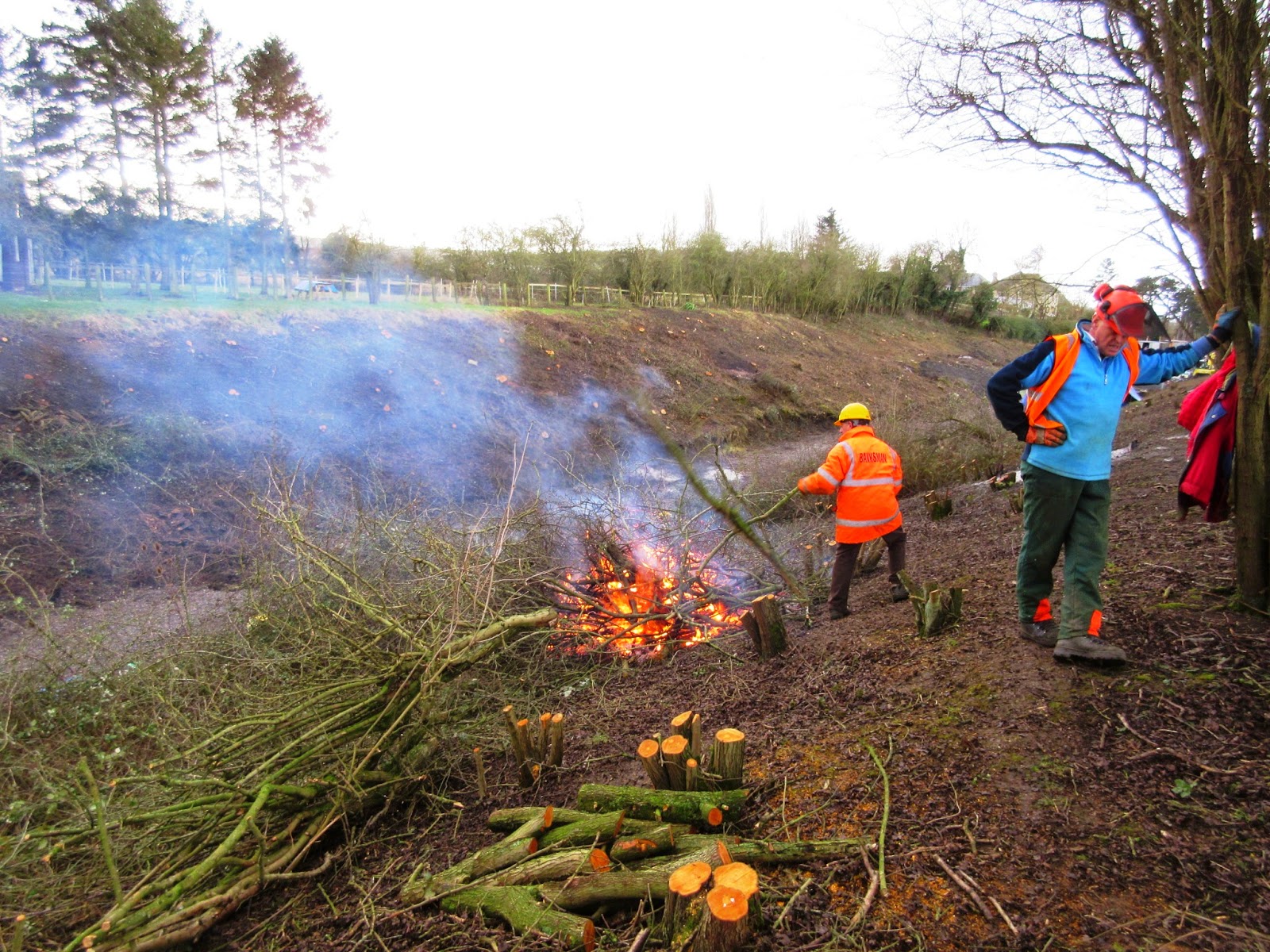 Further up in the cutting, the banks were continuing to be cleared. Here Brian M is suffering with the efforts involved. Nevertheless Brian, Jo and Steve, assisted by Ian in the  afternoon, cleared another 10m of bank. 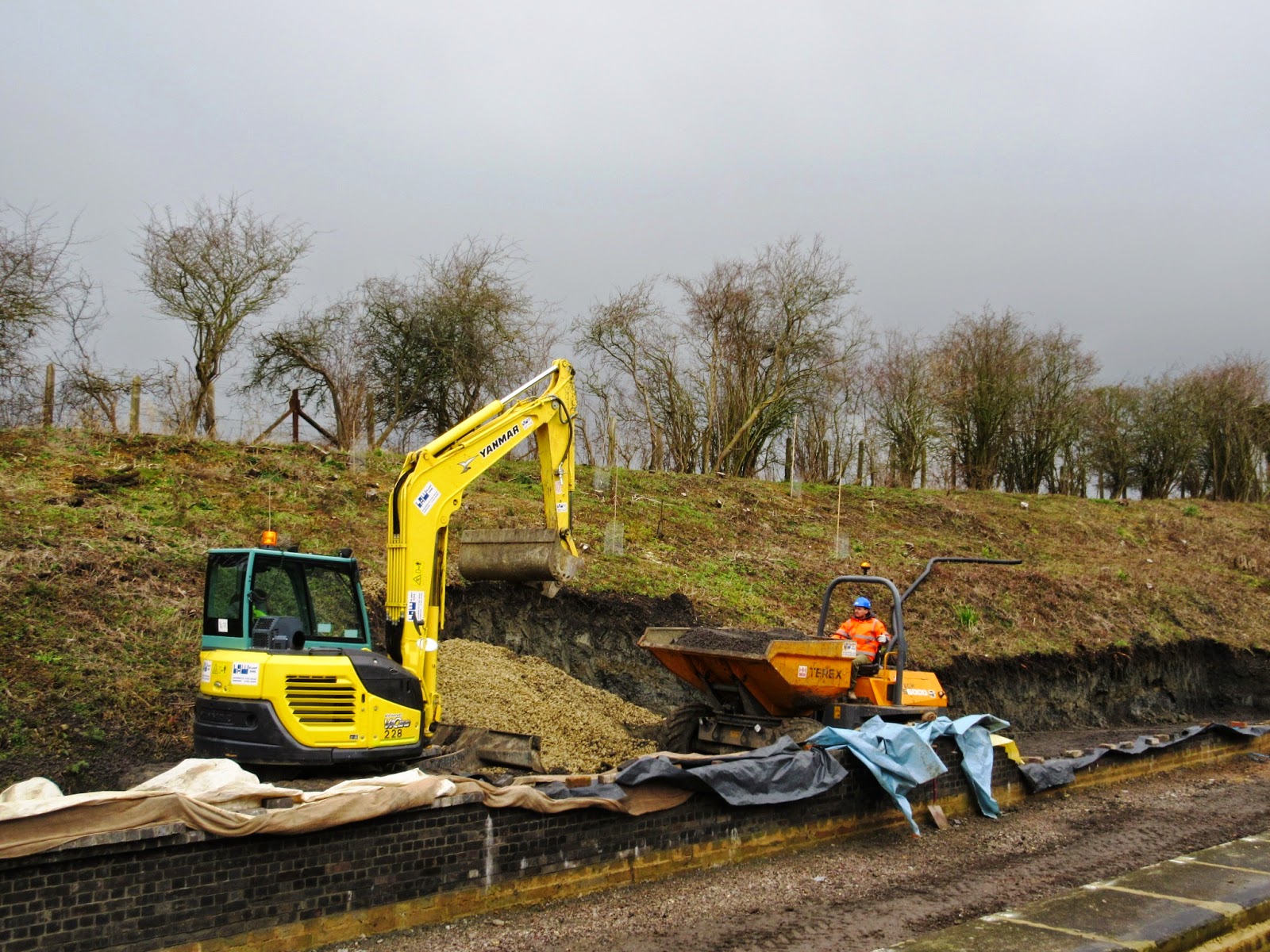 Finally a quick report on the slip repair. George Law have placed, layered and rolled, 80t of Toddington Ballast behind the 2C wall. The slip itself has been banked up with spare bags of stone, which has then been filled with 40t of loose stone. 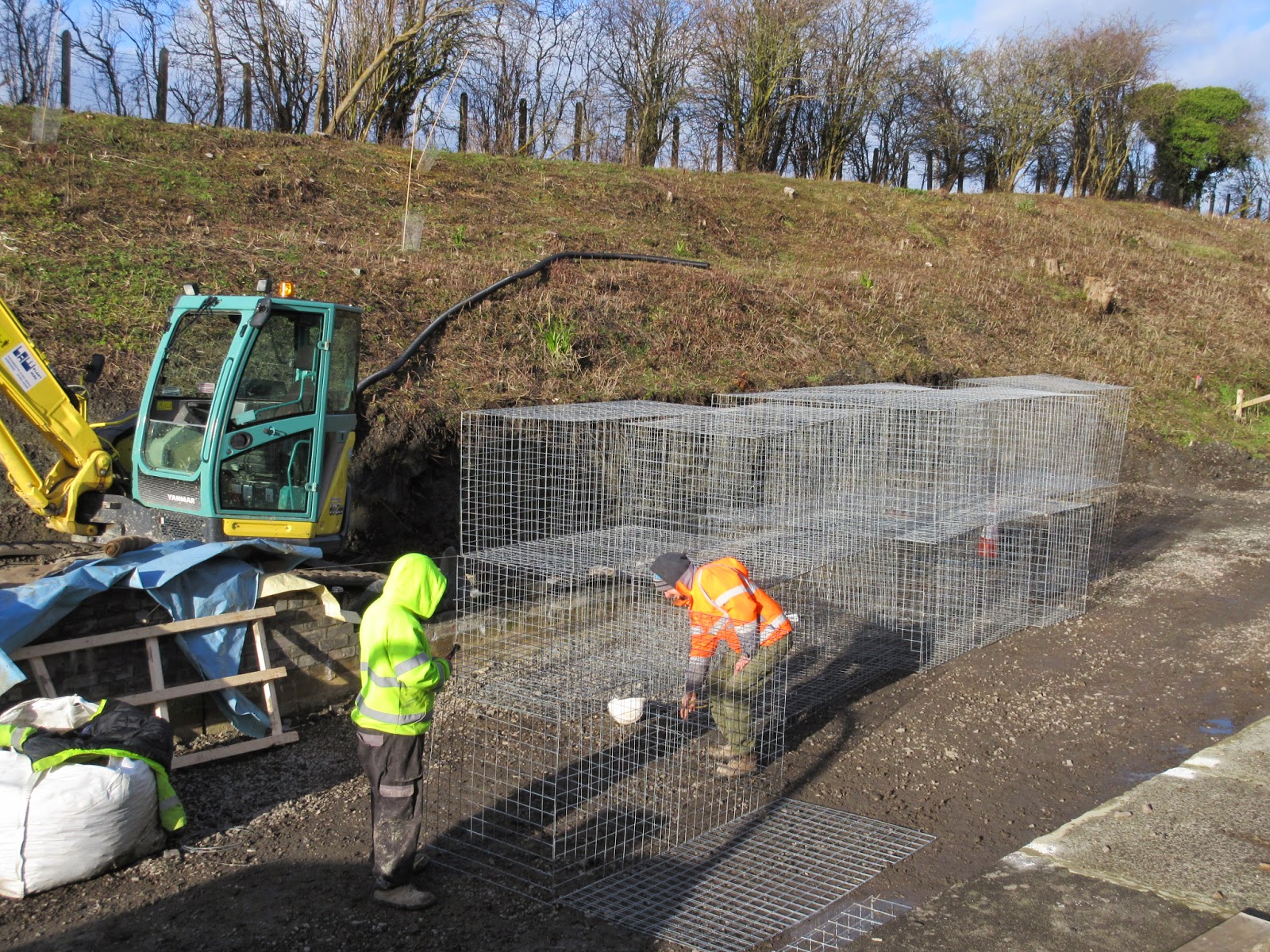 The gabions were delivered this morning, constructed and placed ready for the filling stone to be packed into them. The whole process is an interesting science to watch and understand - I just wish it wasn't happening on my patch! 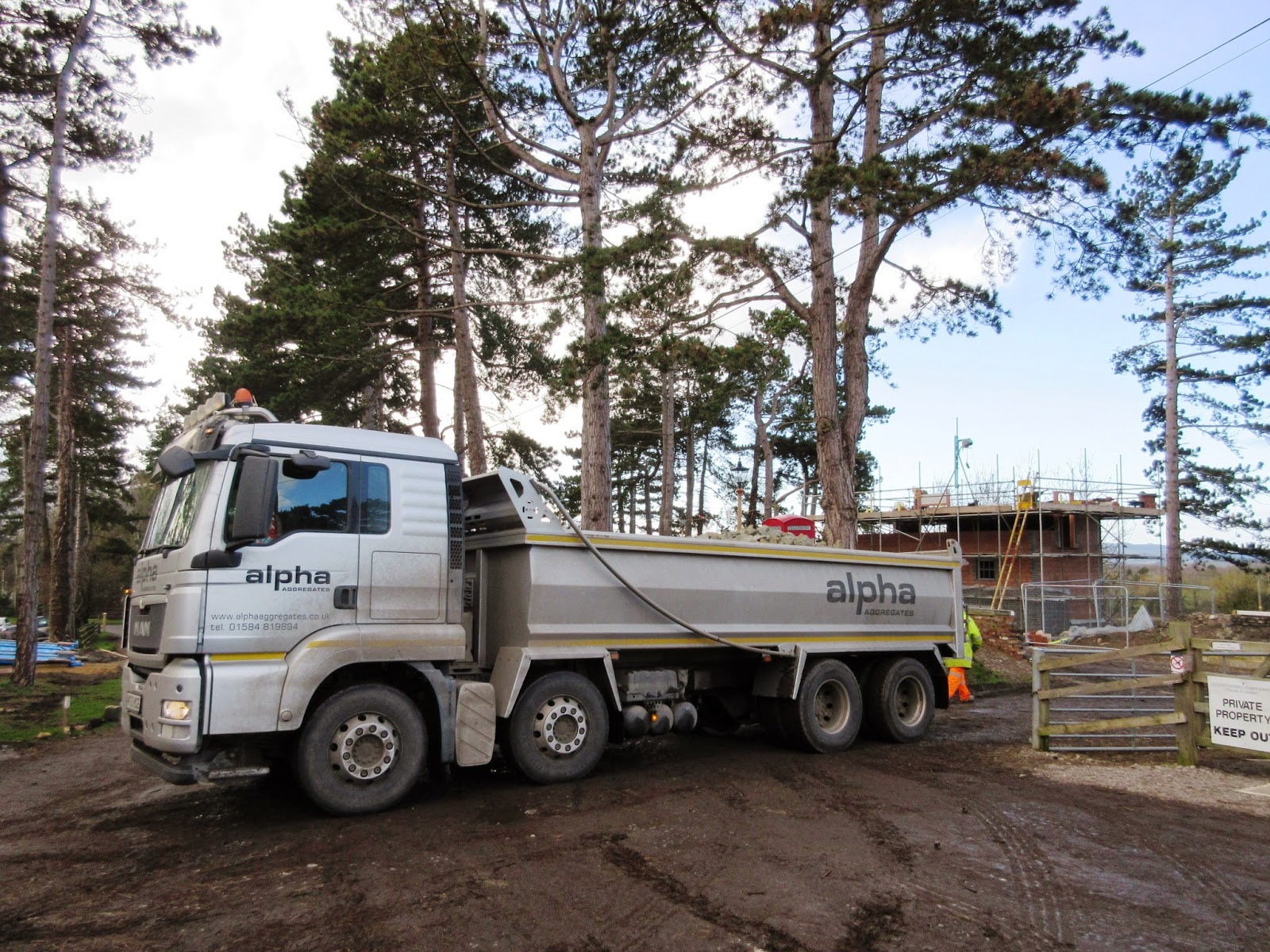 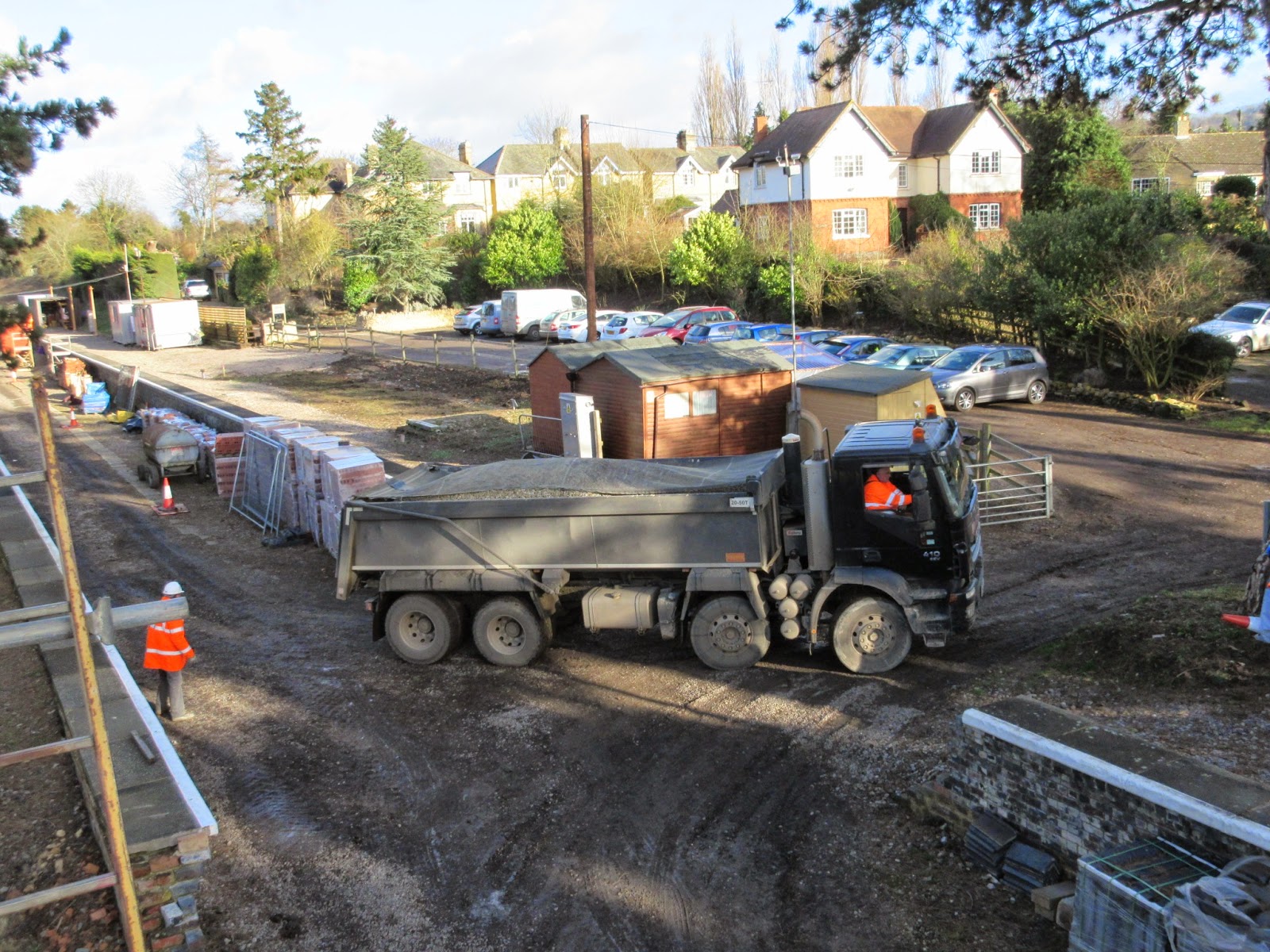 The Shed
We have many generous donations of second hand goods to sell in the Shed. However, as we  are sorting things out before moving, it would be best to hold off bringing new stock until we have moved. Thank you!
Posted by Bill at 21:00

Hi bill I noticed some canes with wire in the banks, are these new plants? If so out of interest what are they? Are there any plans to add a few more corsican pines now the station is longer ? Thanks

They are indeed new pines, grown from seed. They are planted in the same spacing, from the end of the original platform to the end of the new. Let's hope they survive!

Lovely seeing the signal box being worked on again. Are the gabions that are being installed north of the footbridge location?
Burt Pembroke

Burt, yes they are on the North end of platform 2.

Nice shot of the truck backing through the gate with the signal box in the background - that's an angle of the site that I don't think we've seen before. I assume that's the newly laid base on the far left of that shot?