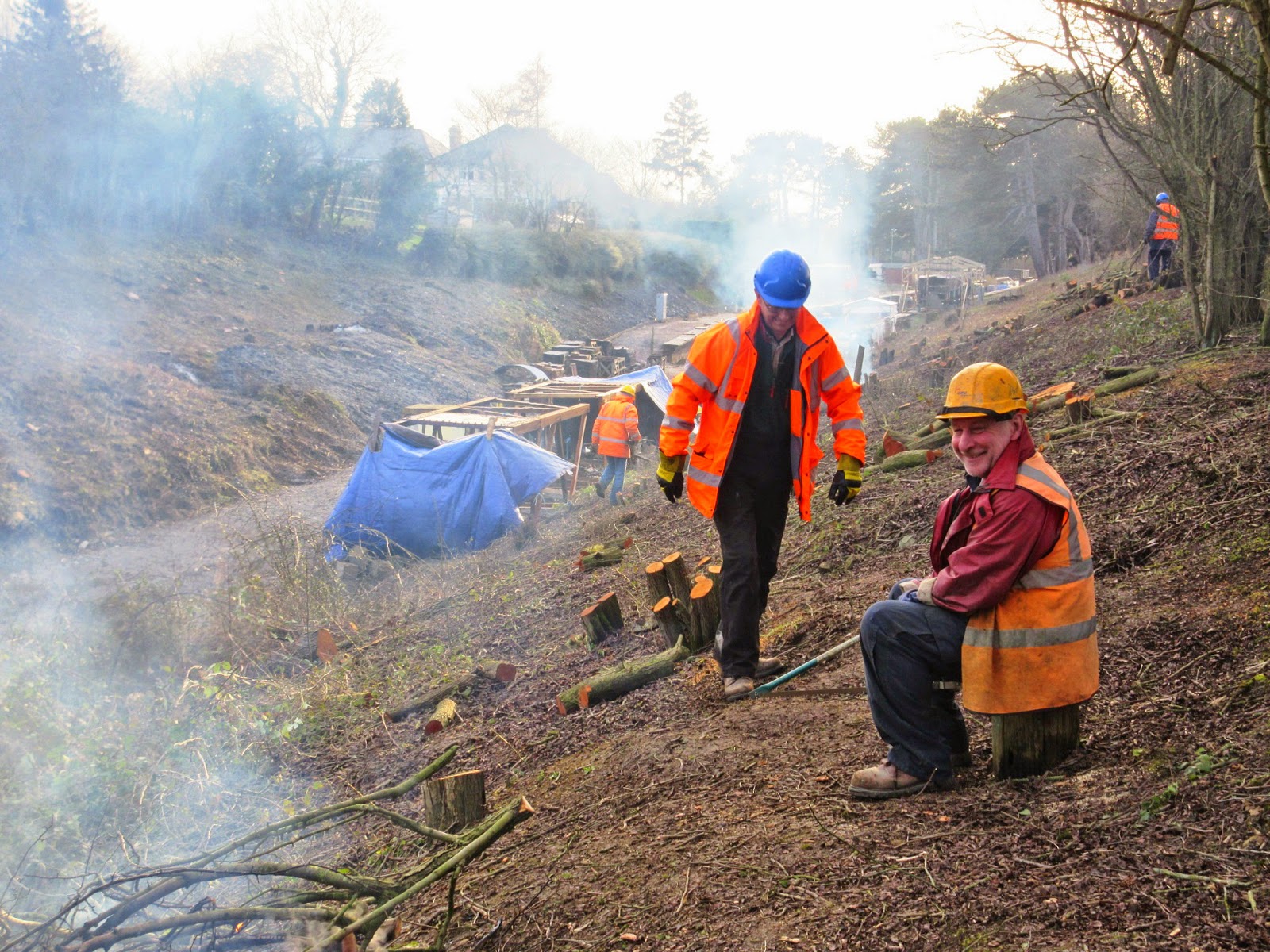 There were 16 volunteers on site today and the cold weather had eliminated any chance of bricklaying.  However we never run out of productive things to do and today the cold wind encouraged us to get the bonfires going. We have a huge amount of cut back debris to dispose of and I was impressed with how well the fires burned and consumed it. There were four fires going in total - here Clive giving his Gnome of Zurich impression is working with Roger J, Jo ,Dave B to keep the upper fires going. 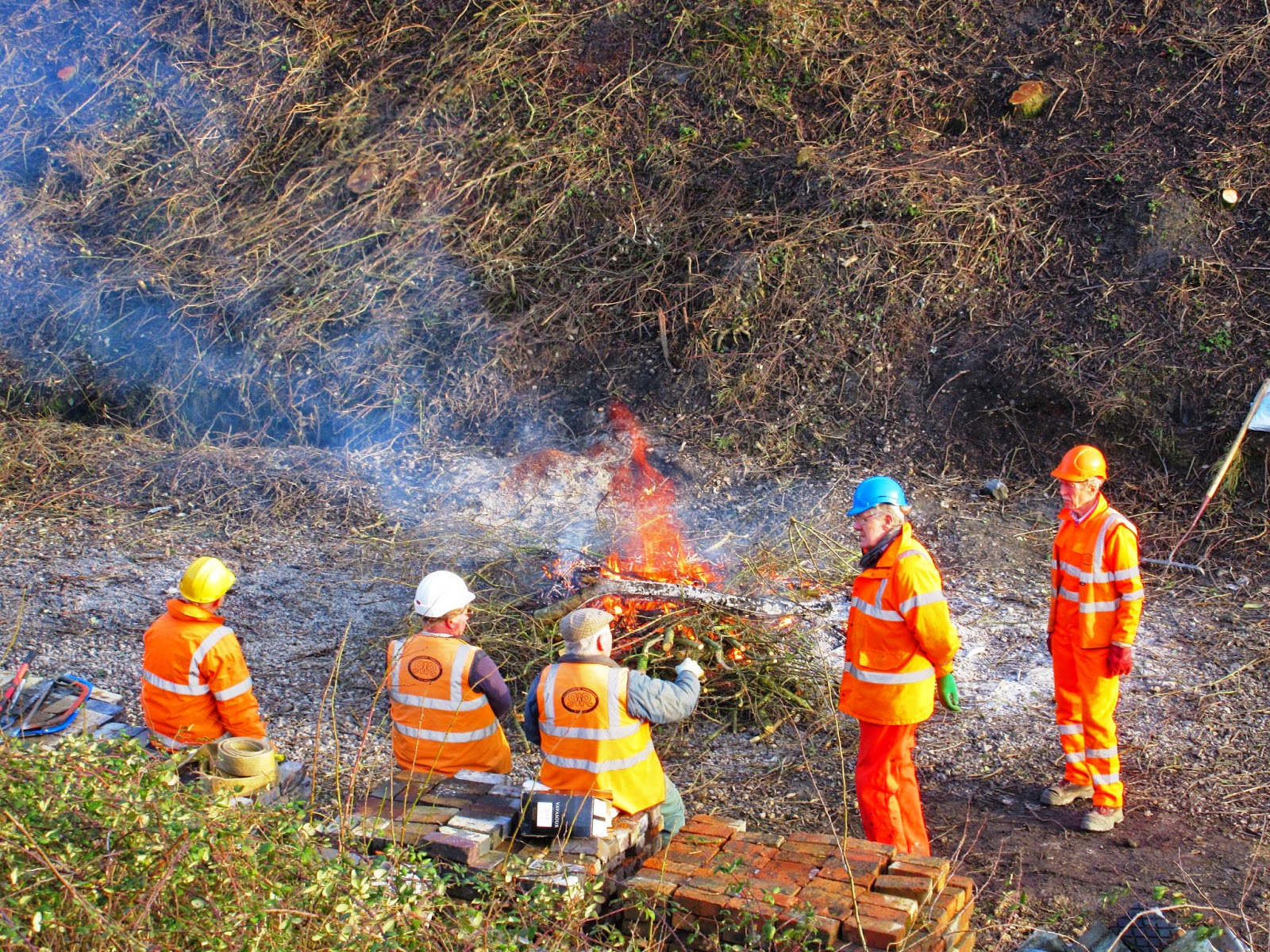 Whilst down on the track bed, JC recounts tales of bonfires past. This bonfire was well tended by Gord and Steve B. Consequently we had to move significant amounts of cut branches to keep it going. 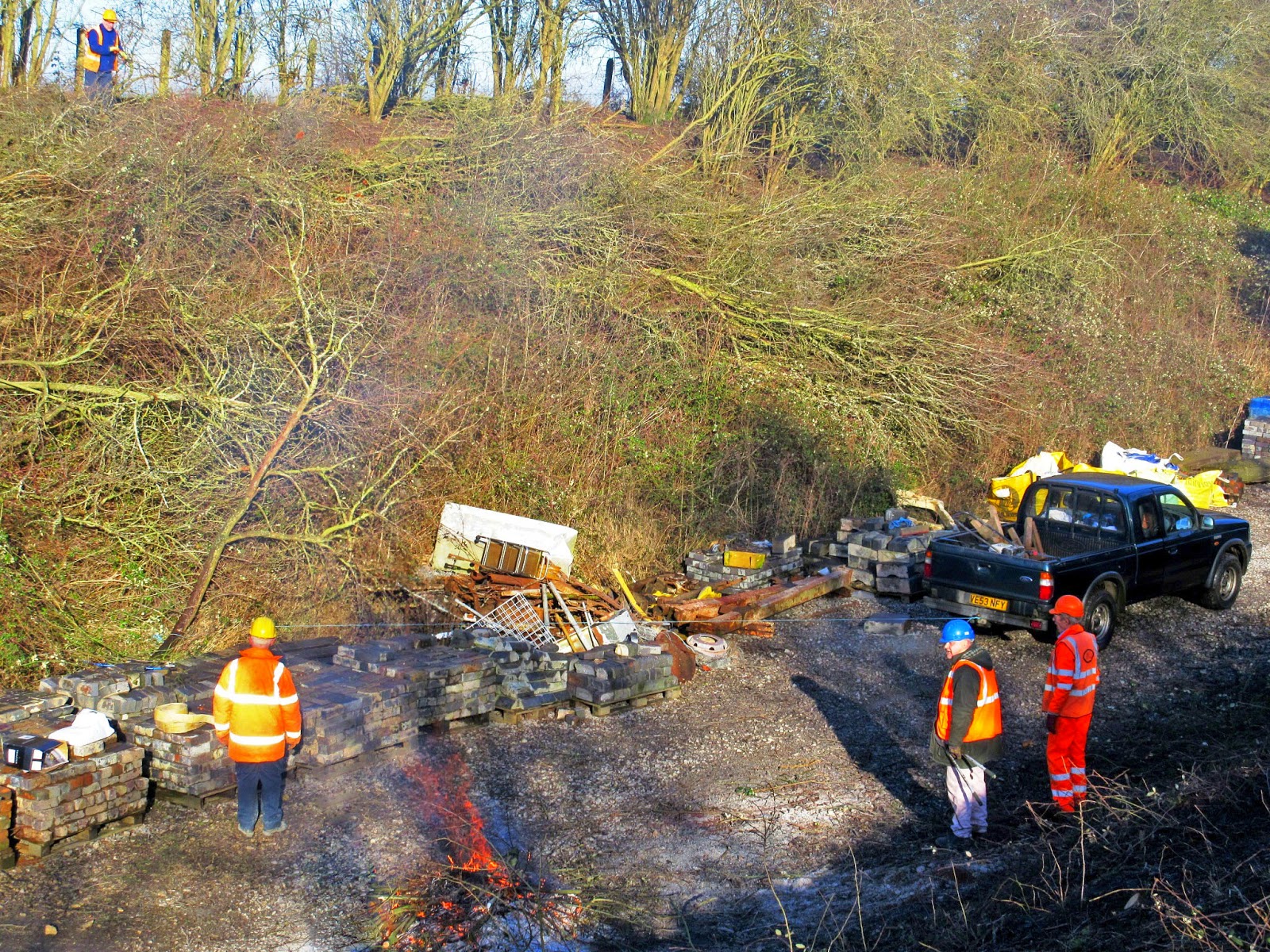 We resorted in the end to using JC's truck to drag the branches from the banks. This was pretty effective and the bonfire was fed  nicely for most of the day. 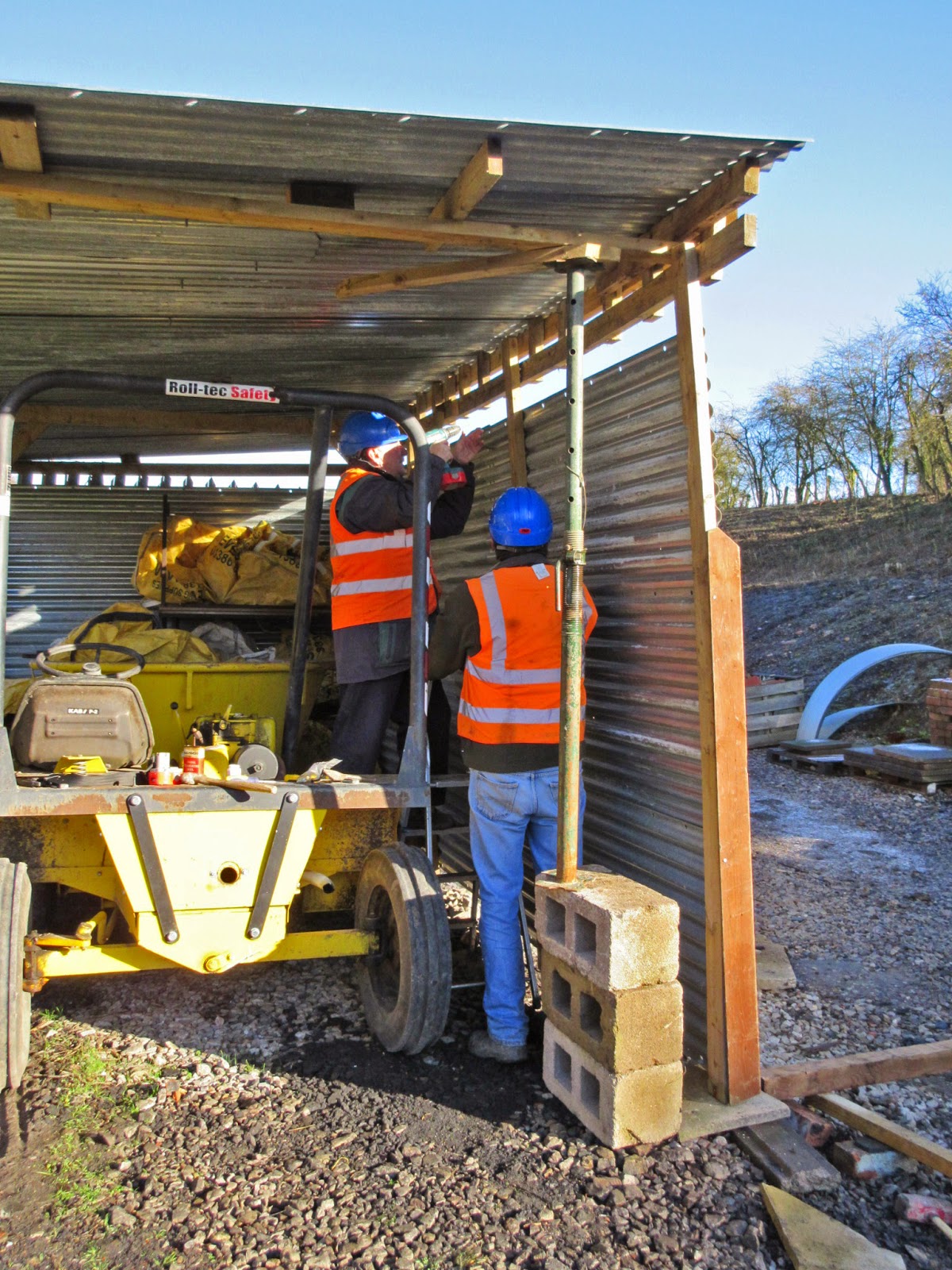 Further south, the tricky job of the day was righting the dumper "Garage" which had taken a battering in the wind and was leaning at a jaunty angle. An Acrow prop was used to support the roof whilst Dave H and Brian put some new braces in to hold the structure square. 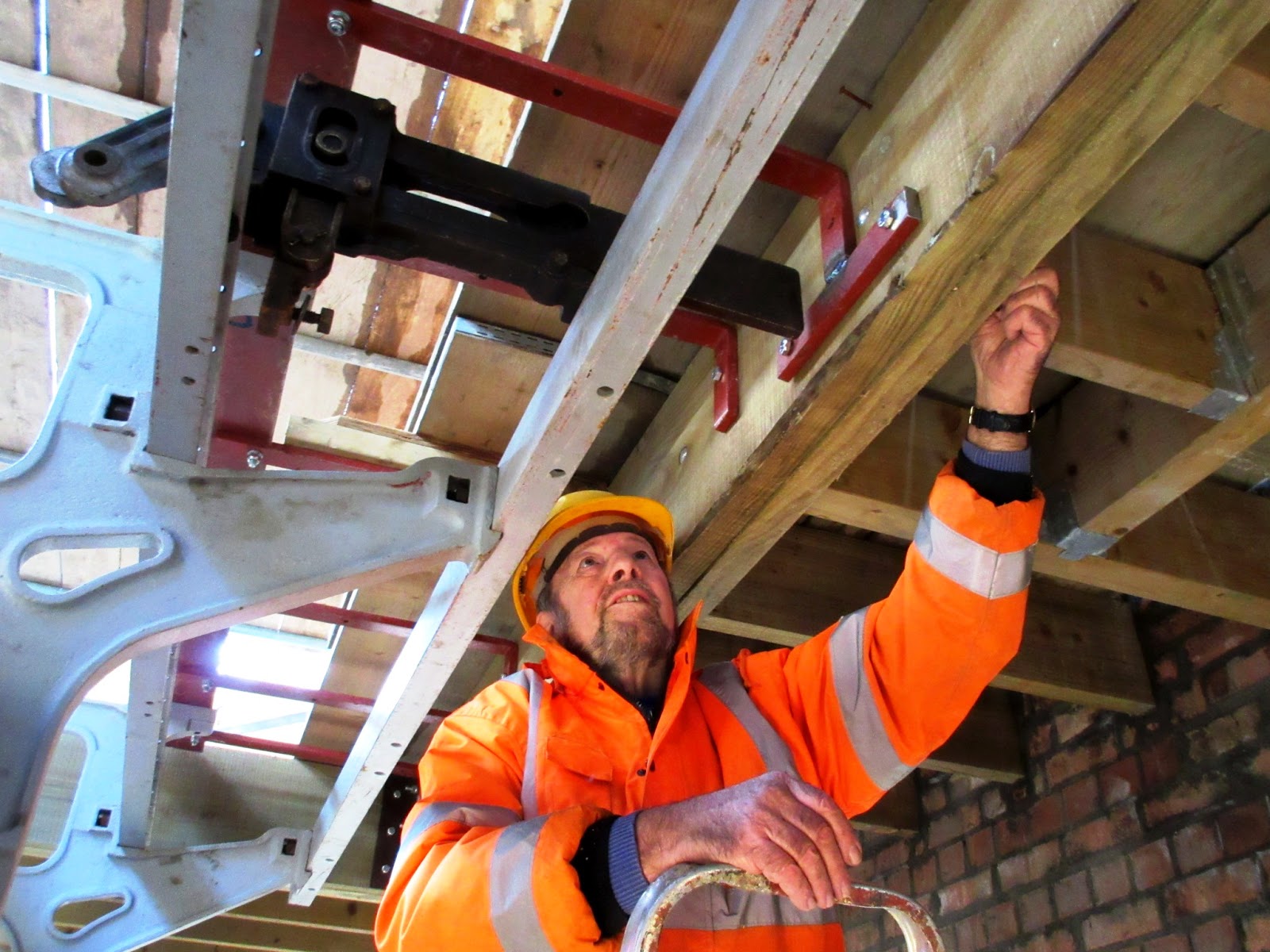 Work didn't stop entirely on the Signal Box. John S and Peter K continued with putting the remaining  metal floor board brackets in place, which span the void between the lever frame and the trimmers. Nice welding job Peter?! 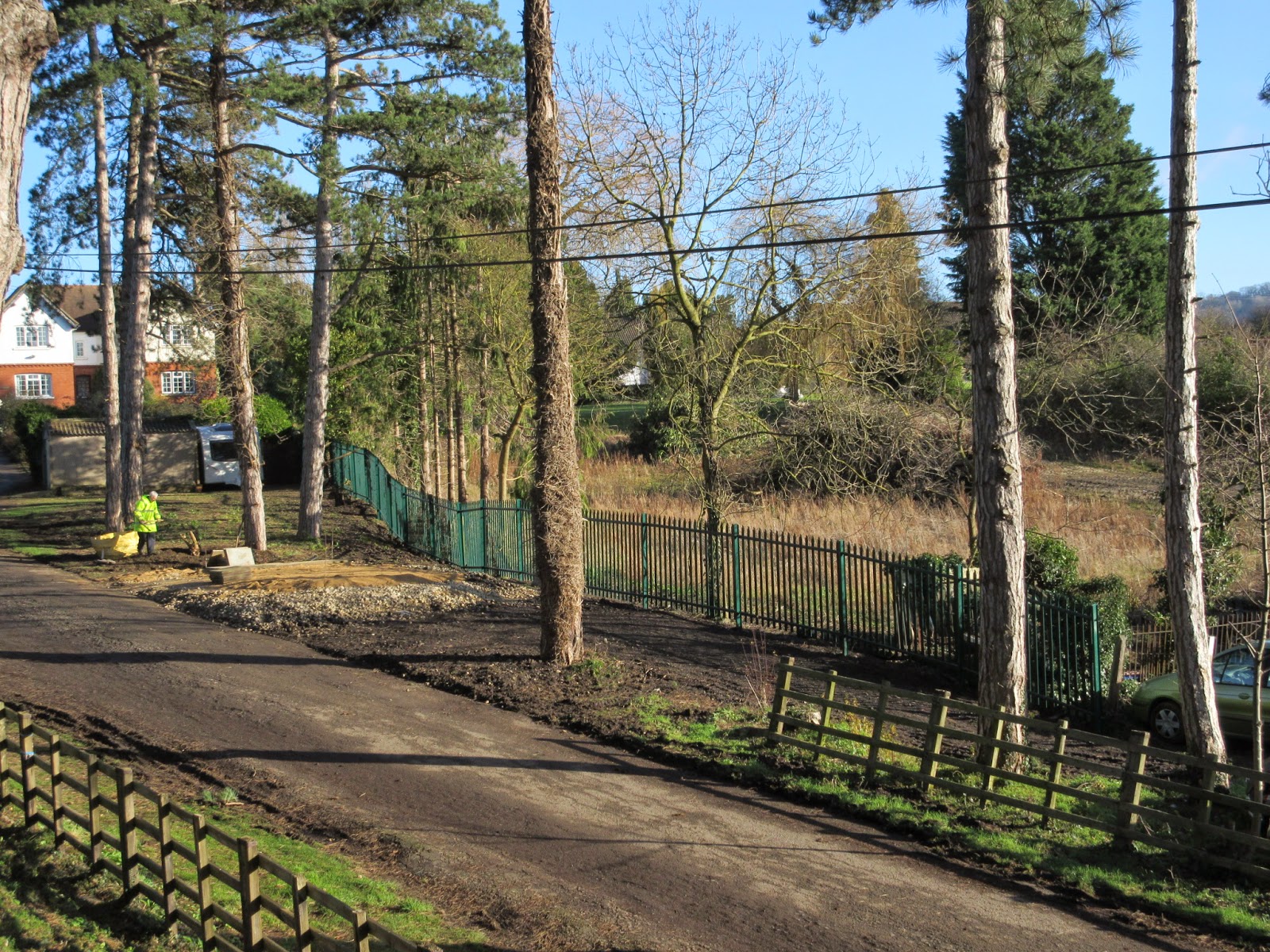 Vic continued with his one man crusade at clearing the land on the eastern boundary. Its a great job Vic.

We have taken delivery of 7 loads of spent ballast removed from Toddington Station and plan to retrieve another 7 loads this week. This will be invaluable for infill on the platforms. 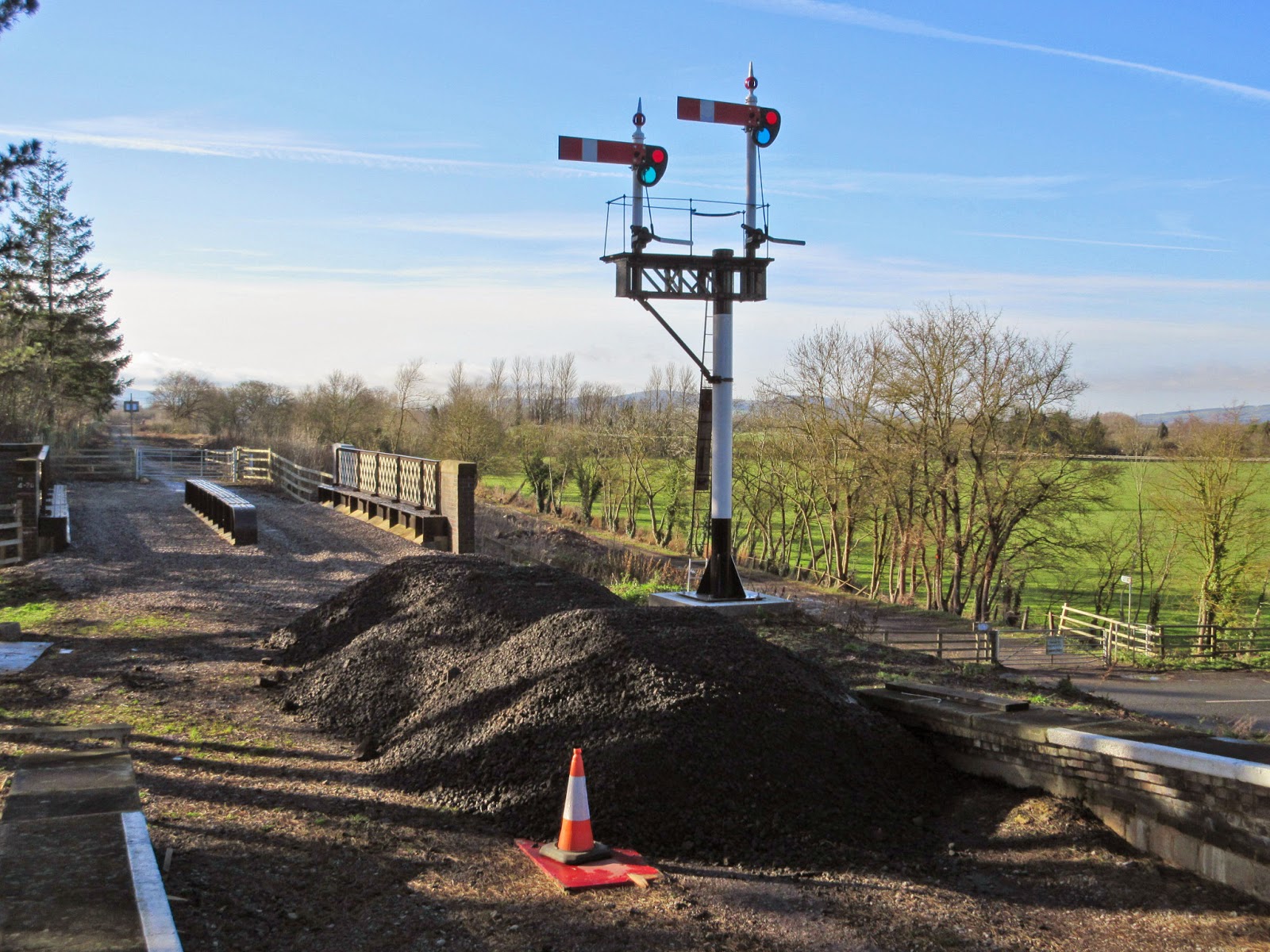 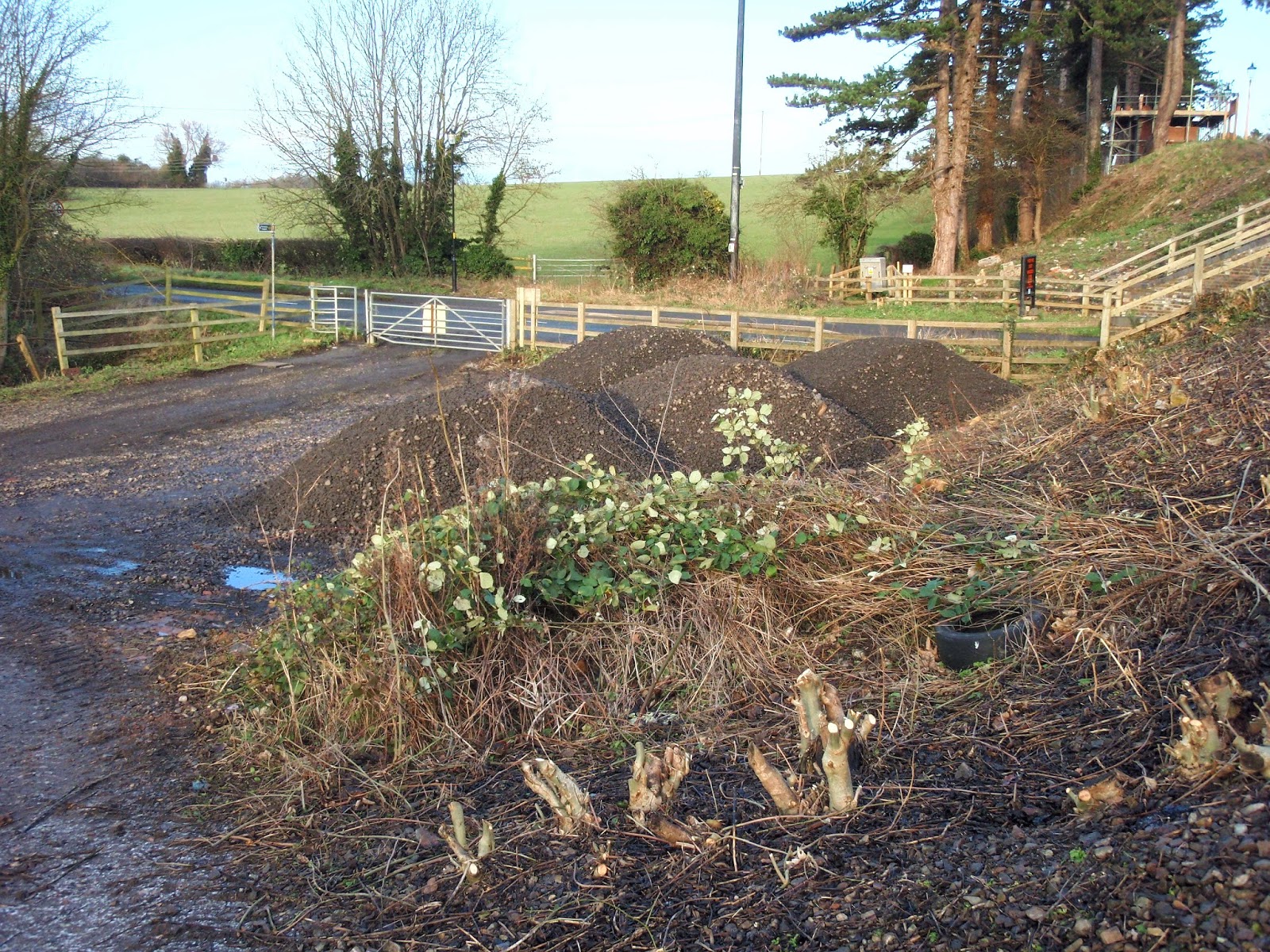 Finally the contractors have been clearing the planned car park - a mixture of chainsaw and flail. Its coming along nicely. 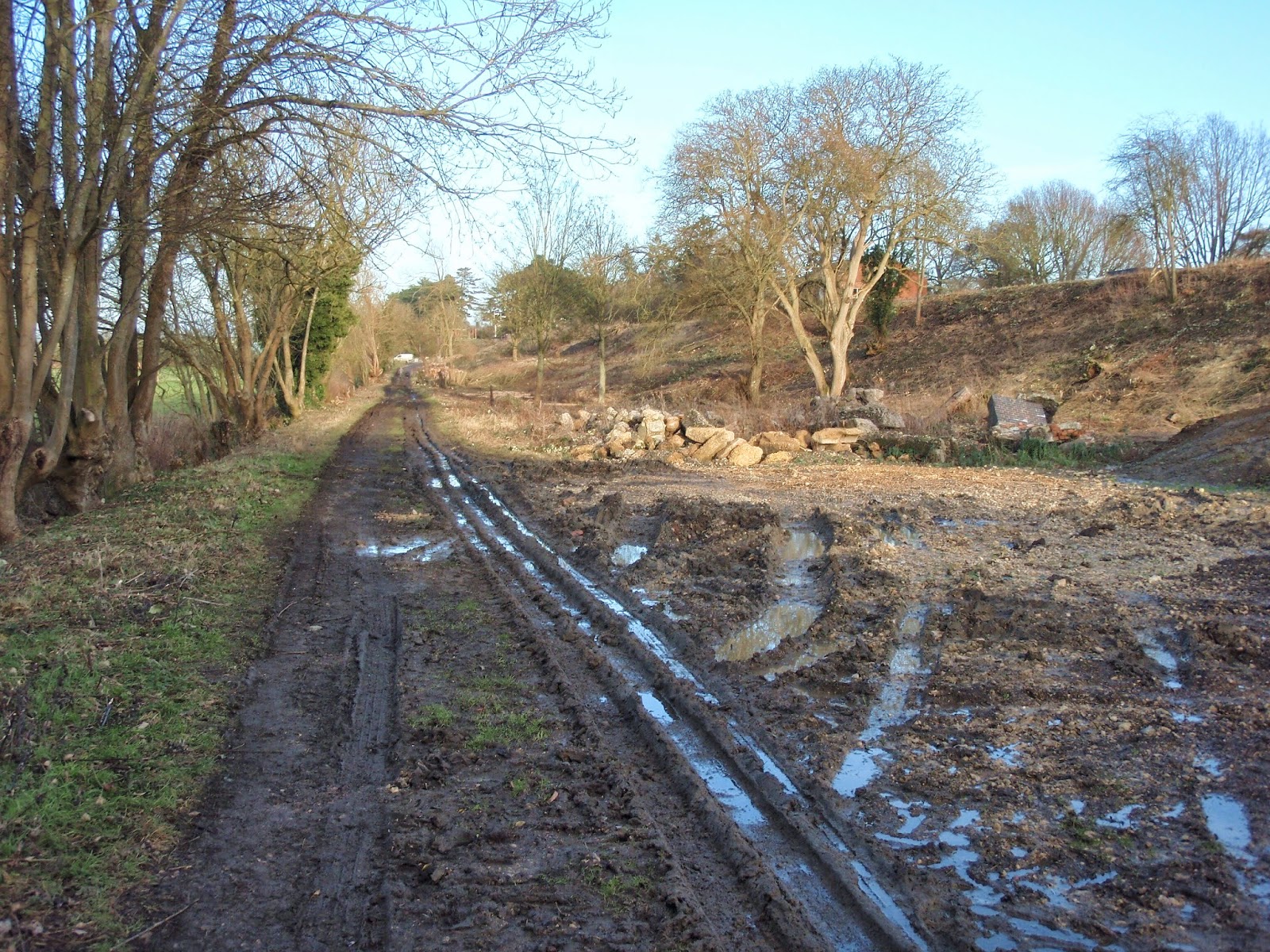 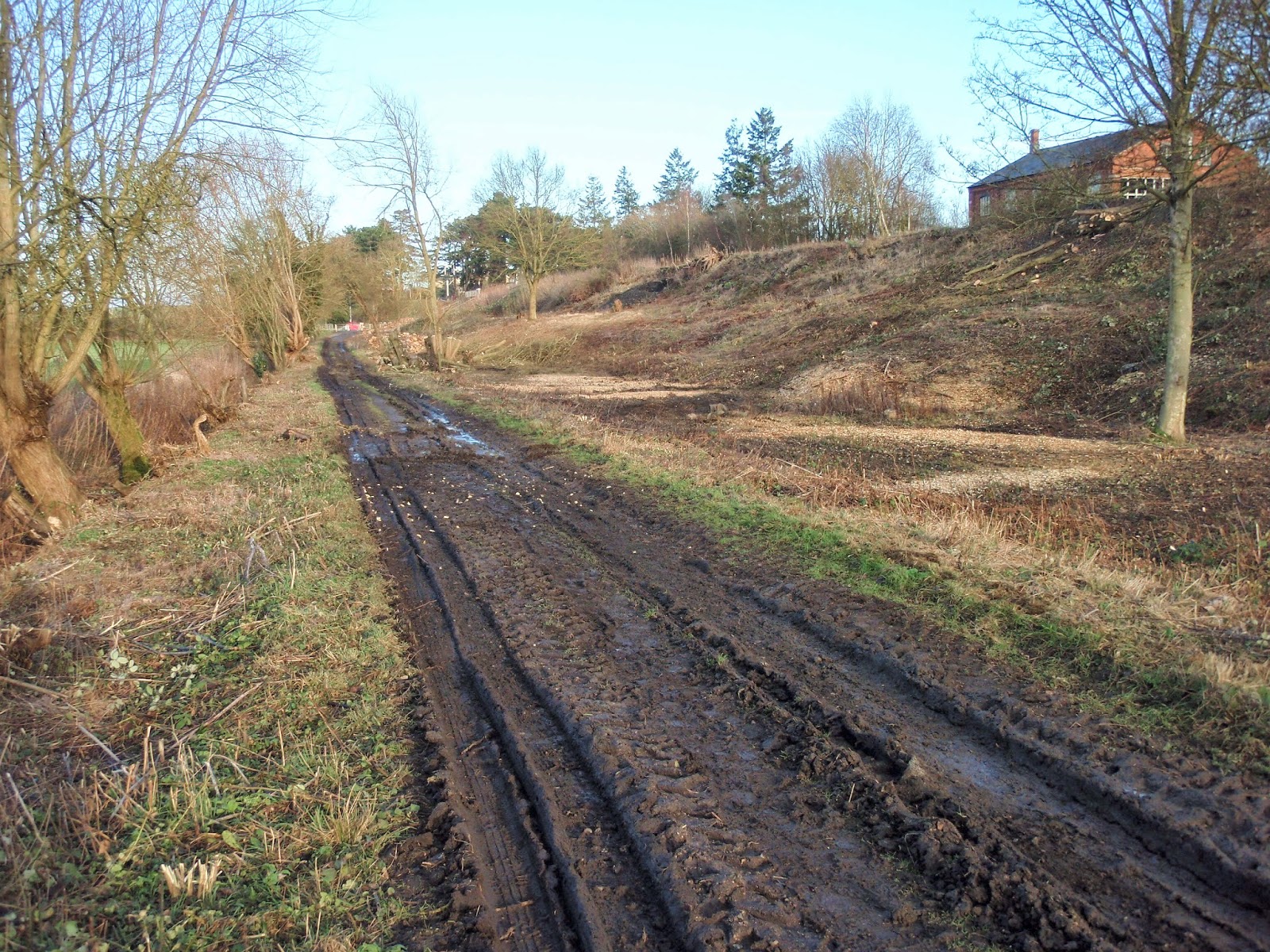 Bill, that will be an impressive car park any thoughts to having a ticket office located down there; also what are the thoughts on crossing the road, Zebra crossing perhaps?

Richard,
I can't say I thought of a ticket office in the car park- it might be appropriate for Galas etc.
We will work with Highways to install a safe road crossing.

Thanks Bill, it Broadway is looking very impressive

Just an idea but have you though of how you could use the first "public" train into the station to raise funds now? You could sell raffle tickets for a ride on the footplate of the first train, and runners up prizes of the following trains through the day? £5 a go over 3 years would be a lot of rail.