An attendance of near record proportions today, with 25 Volunteers on site and keen to get going on the tasks for the day.  Where to start? We'll start at the north and work south! 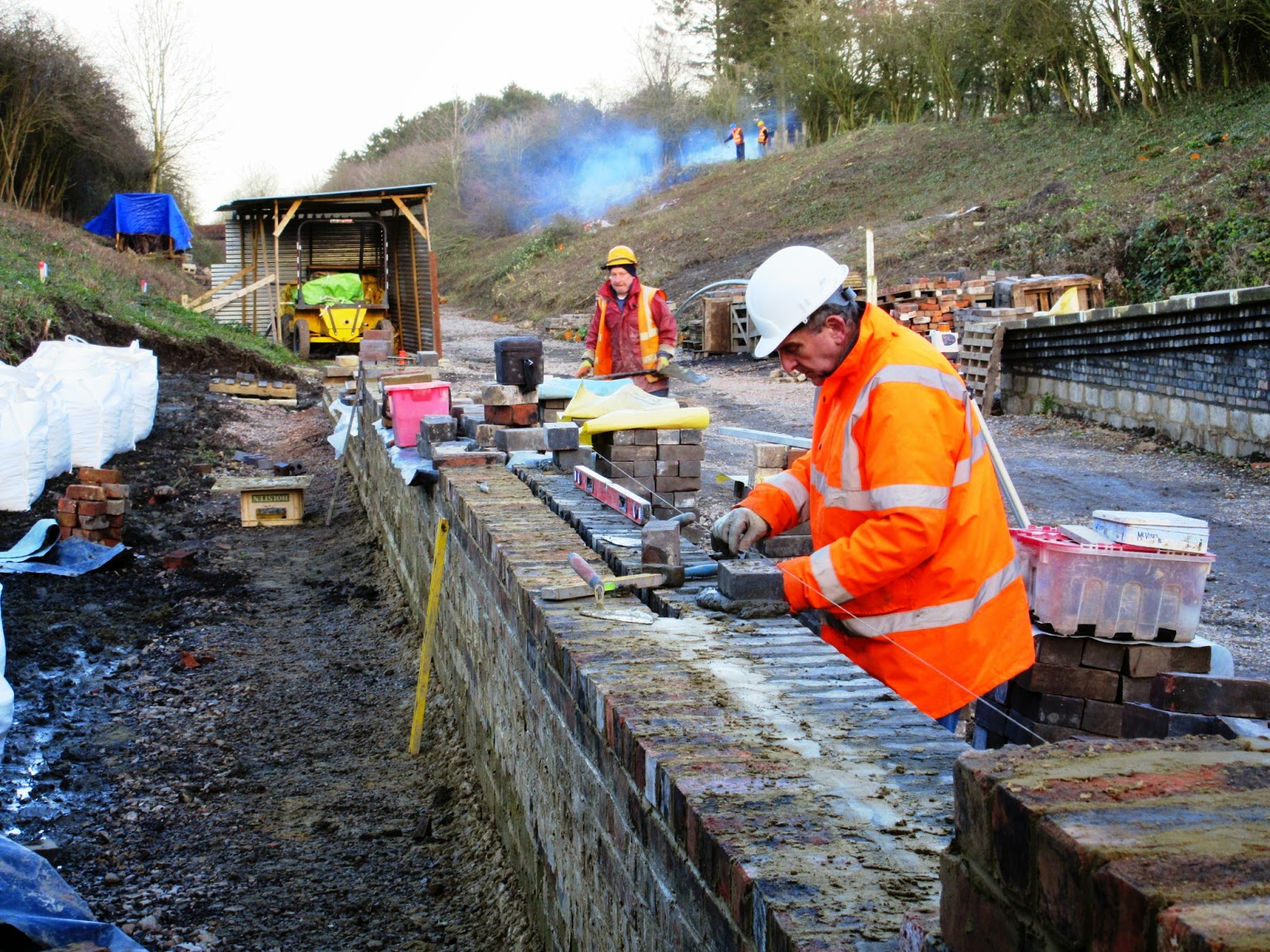 The hacking back of the vegetation on the cutting continued at a pace, with Brian M leading the charge with his chainsaw. I'm having to double up on a picture here with Roger, Peter  and Clive continuing with the bricklaying on 2C. We are having to keep a steady pace going on this wall such that completion will allow us to start the infill and reduce the risk of further slips. 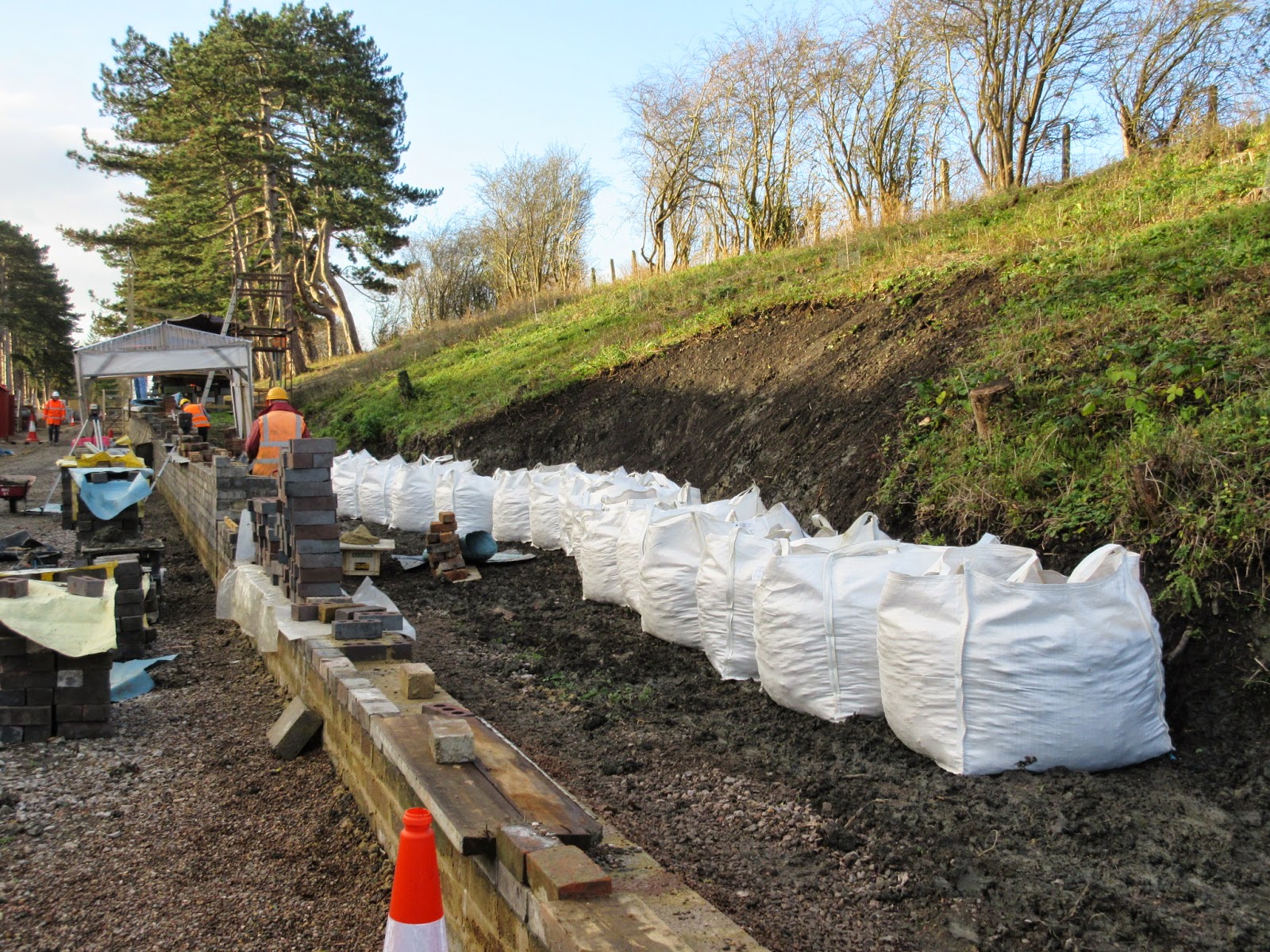 Here we see the bags of crushed concrete that have been strategically placed in order to protect the edge of the cutting.

Here is Rogers report with my apologies for  duplication of info:-

Team 1 - Bricklaying Platform 2c, Section 2, I completed one & half rows of blues which takes it up to Corbeling level. Peter H followed me and did the backup.
Weather permitting it should be possible to finish the remaining half row of blues next week and also commence Corbeling.
Platform 2c Section 3, Clive worked on the front (Blues) and the back (Reds) bringing this Section requiring 2 more rows before we commence Corbeling.

Team 2 - On Platform 1c, Terry and Rod laid nine & a half soil retaining slabs which completes this Section. The finished job looks superb and very professional. 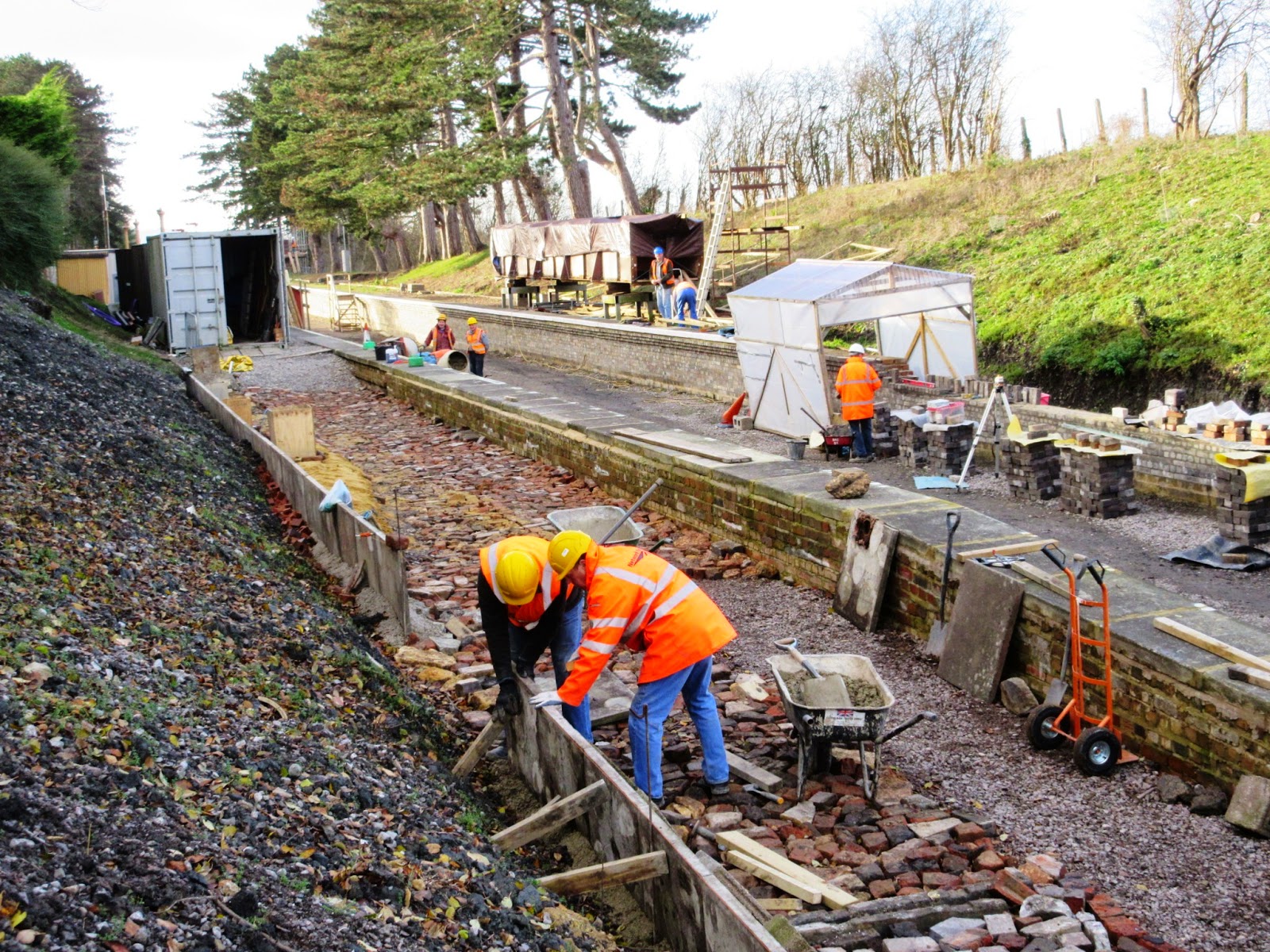 Sticking with the northern end of the site, Terry and Rod finished off the laying of the rear slabs along platform 1C. At least they can celebrate the fact that this is the last long run of rear slabs (apart from filling the gap by the gate). Frankly we'll all be queuing up to do that - it will mean the "Job" is just about done! 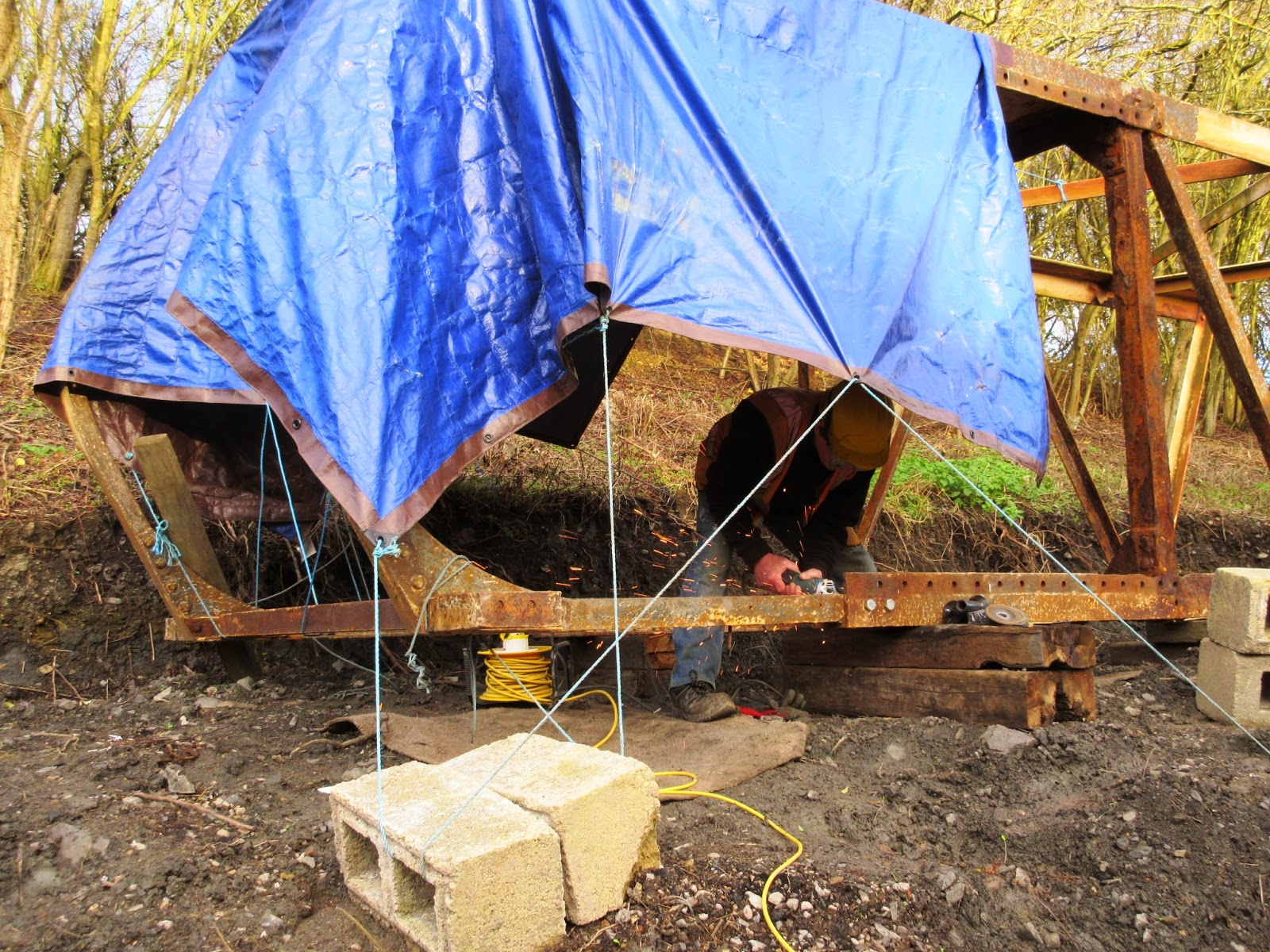 One task which fell foul to  two clapped out angle grinders was the removal of the hoops on the footbridge towers. Here Steve B is doing his best, but the equipment gave up the ghost - a job to be resumed next week! Talking of the footbridge, work continued on building a working enclosure for the centre span.

Here Peter Q and Dave H  start the task of building the wooden skeleton of the enclosure. It's a big task - it,s a big bridge! 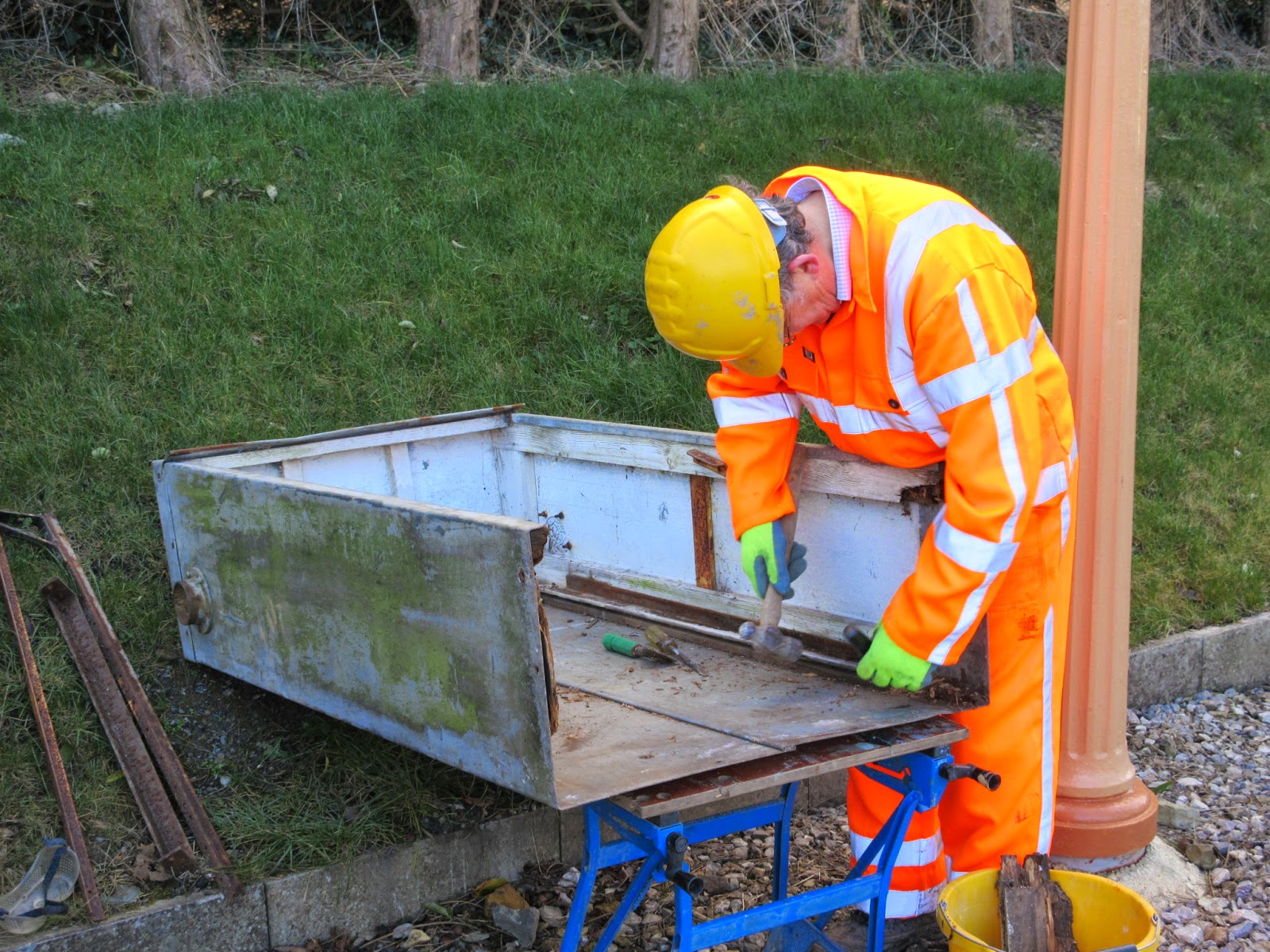 So we move across to platform 1 where Mike is refurbishing a line side cabinet. This is always a labour of love - they have a good deal of rotten wood inside, that has to be replaced. 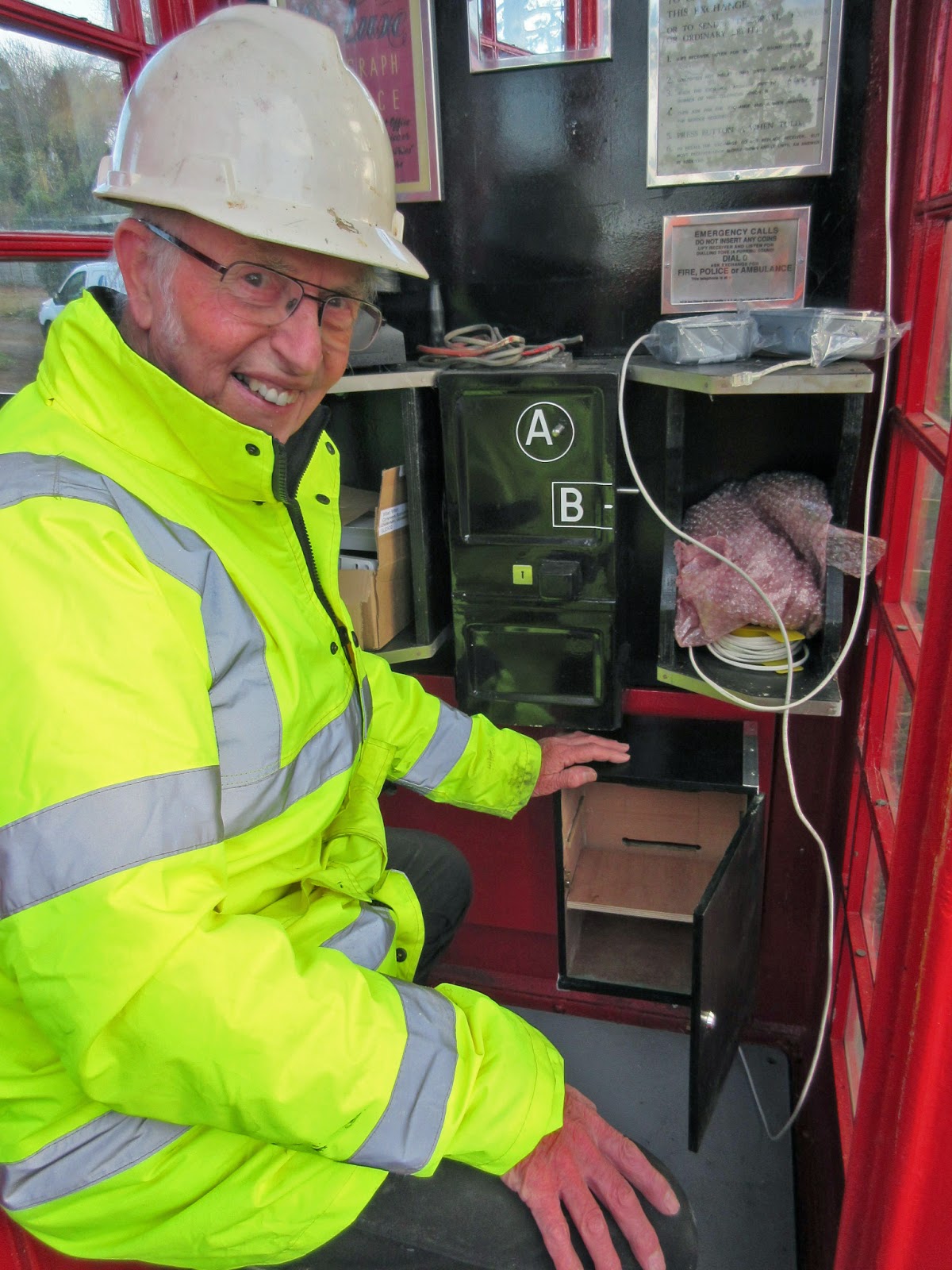 Further down  platform 1 Peter T was installing a small communication equipment cabinet in the telephone box. We at last have  a phone and Broadband connection - hurrah - could BT have taken longer-  possibly, but I don't see how!

Finally over to the signal box where bricklaying by JC, Bob W, Tony and Paul was making really good progress. A good summary from JC:- 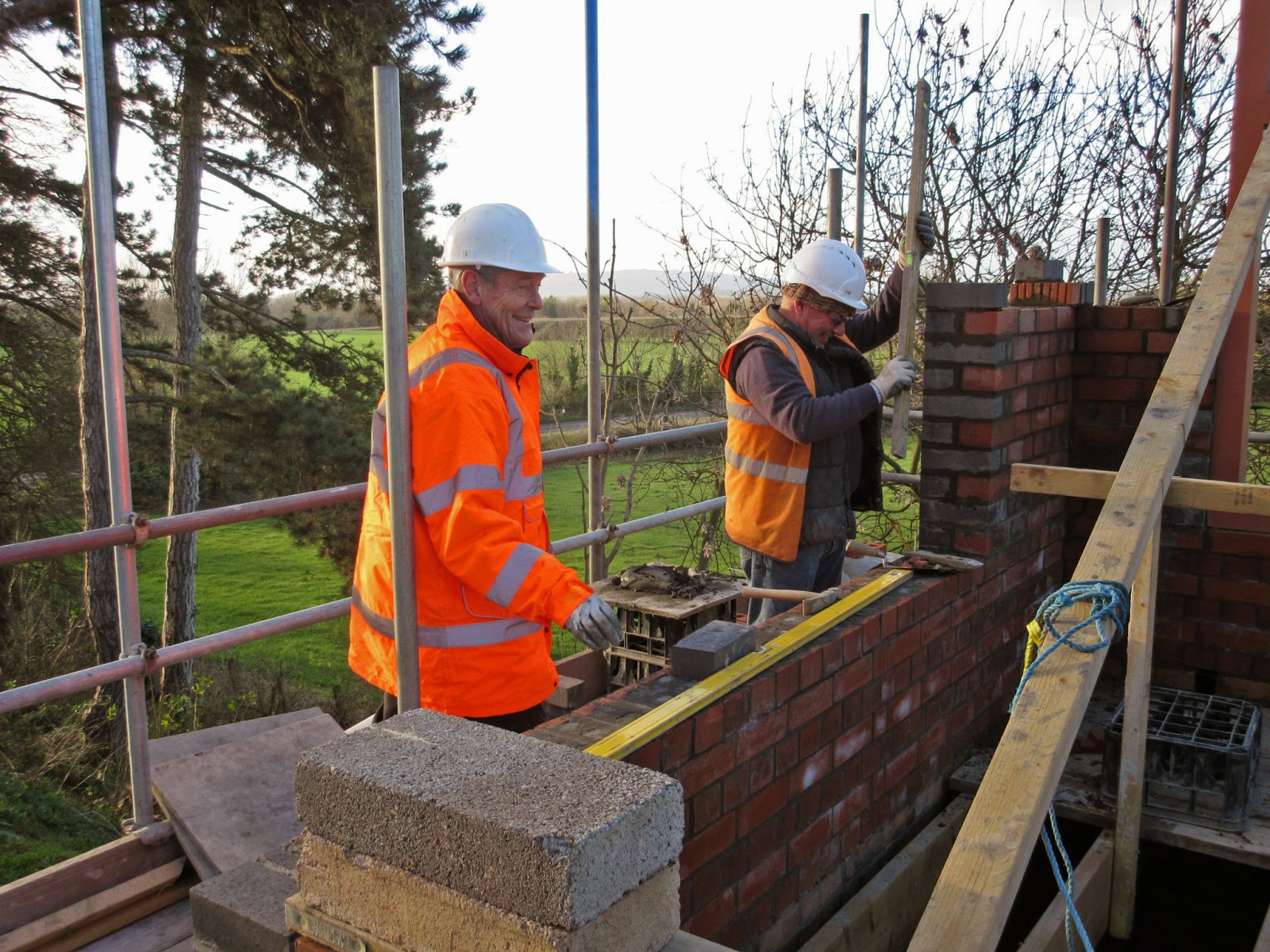 Hi Bill ,
just to give you a few facts and figures, today we laid 8 courses of bricks on each gable end and they are now both up to the level for the next lift of  scaffolding.  We have just 5 courses to lay on the rear wall when winds allow.


The starter flue liner was also fitted today and the arch former was removed late pm. 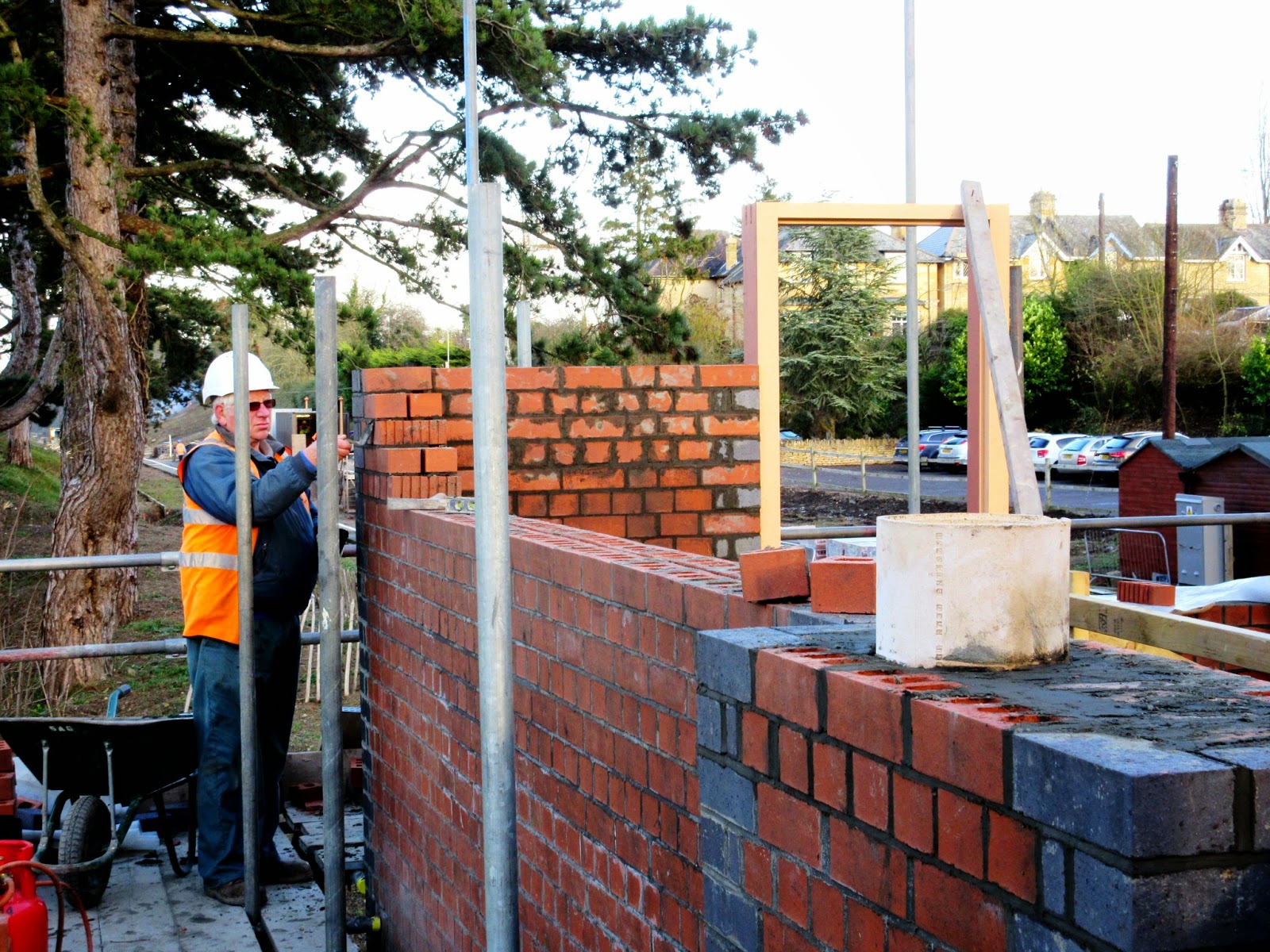 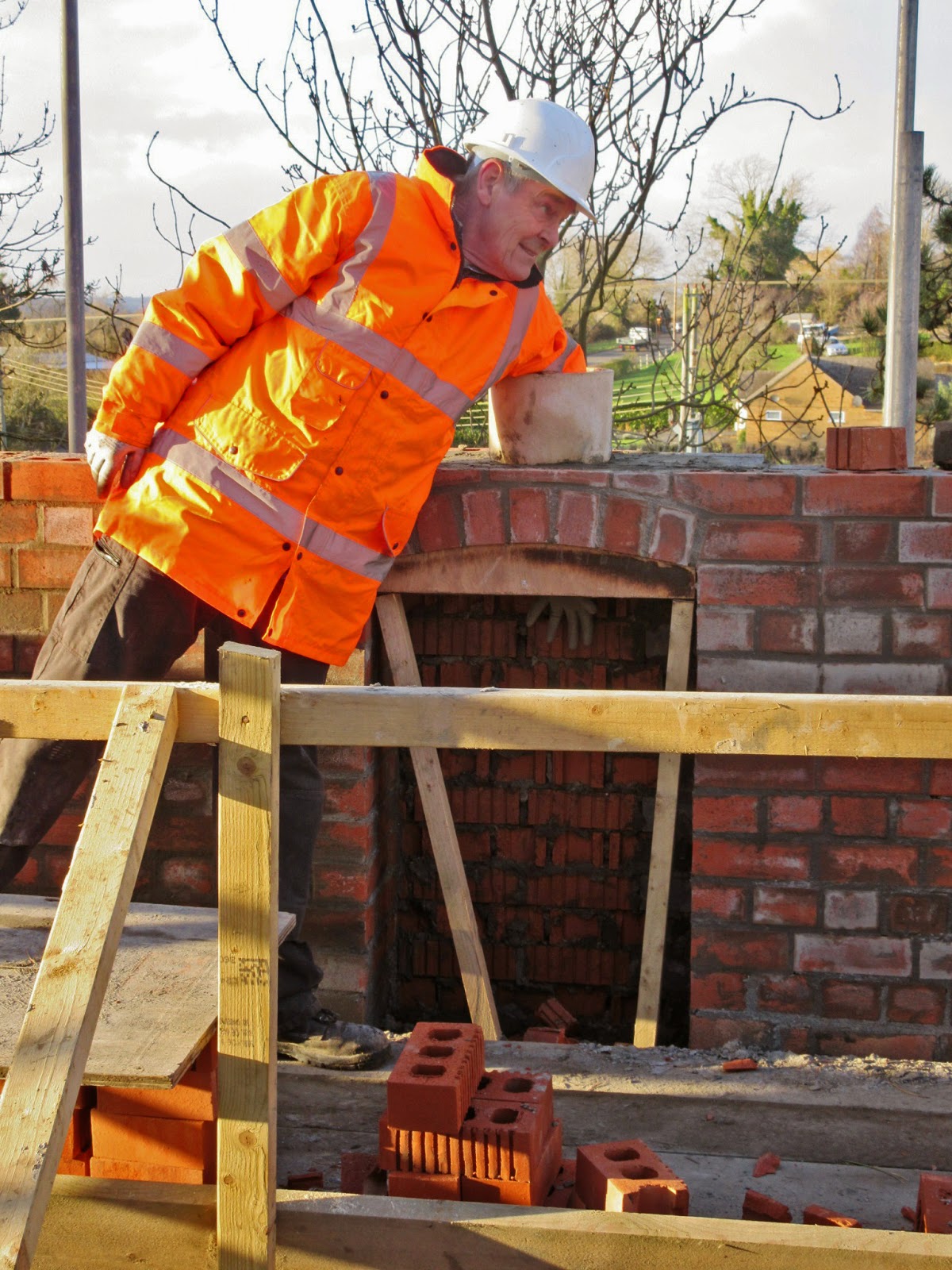 It was  Graham L 's treat today when he brought in the biggest cake seen for some time(ever?) at Broadway, to celebrate his birthday which is on Friday. He was also celebrating getting his full WP. Quite a lot to celebrate - Happy Birthday Graham the cake tasted great! Understand the cakes have to get even bigger and better on subsequent birthday! 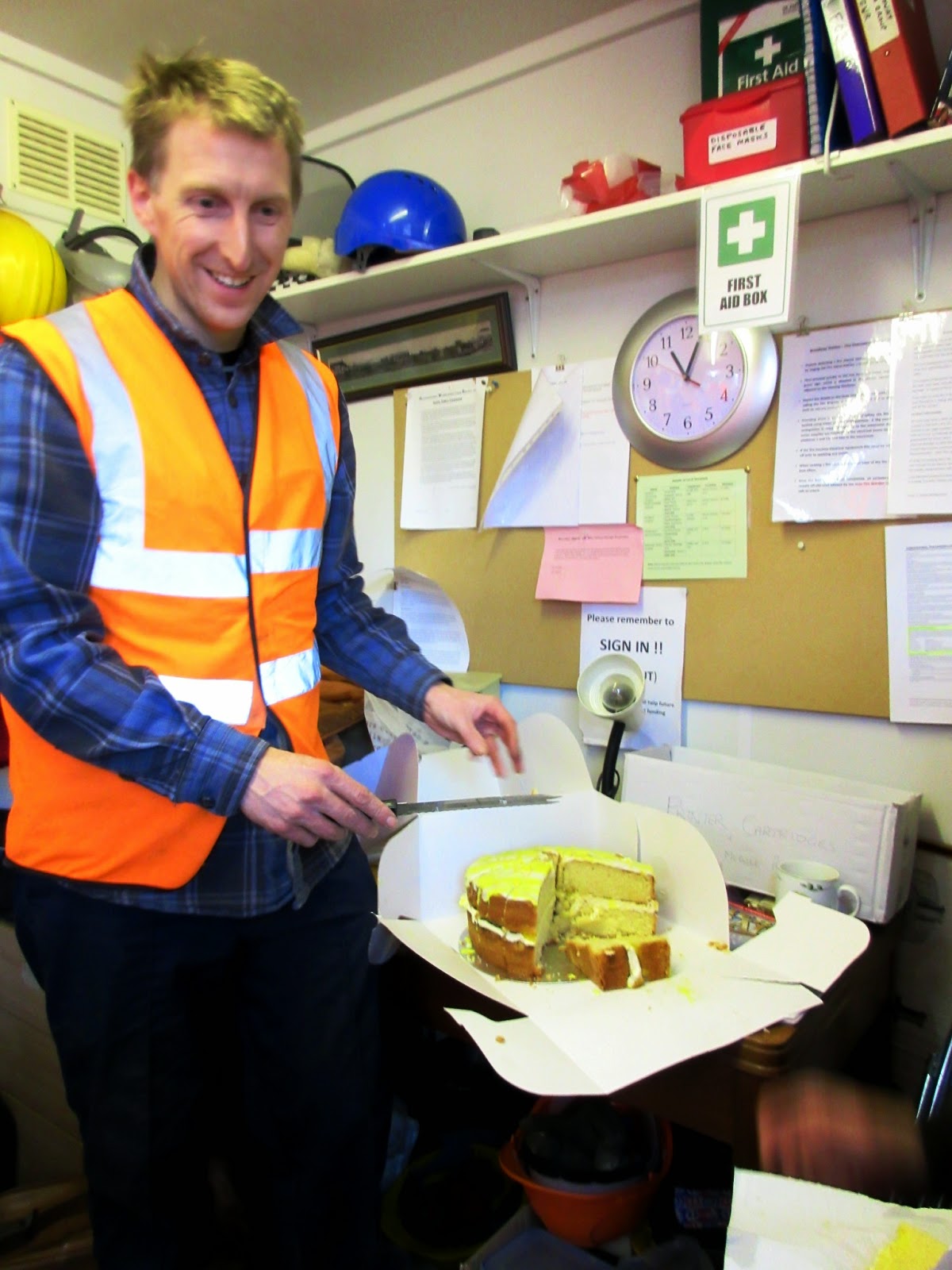 I'm assuming such is a reference to the 'machines' rather than the 'operators'?

Get a couple of Makitas,

It's what we use and are well up to the job with 1mm cutting discs.

The DeWalts, although better for certain functions, are a bit on the heavy side when used for protracted periods.

Re laying the rear slabs, the slabs behind the new section of platform (2c) also need to be laid, so if anyone has any 3ft x 2ft (or 2x2) concrete slabs they don't need anymore, please let us know so we have a large enough supply to finish this work.

Hi Ken,
They were Makitas but just didn't have the power for the job - we will have to find something with a bit more horsepower!

Hi Terry and Rod, I was thinking we might have to resort to some gabions along the 2C stretch to retain what seems to be a very mobile embankment! We shall have to see as we progress. Nevertheless if any supporters do have some 2x2 or 2x3 slabs we would be most grateful!