There were 18 of us on site today, soon to be 16 when Jo had a mishap with his trigger finger and had to be taken to Evesham A& E. He has since  assured me he is ok and doesn't want any fuss! 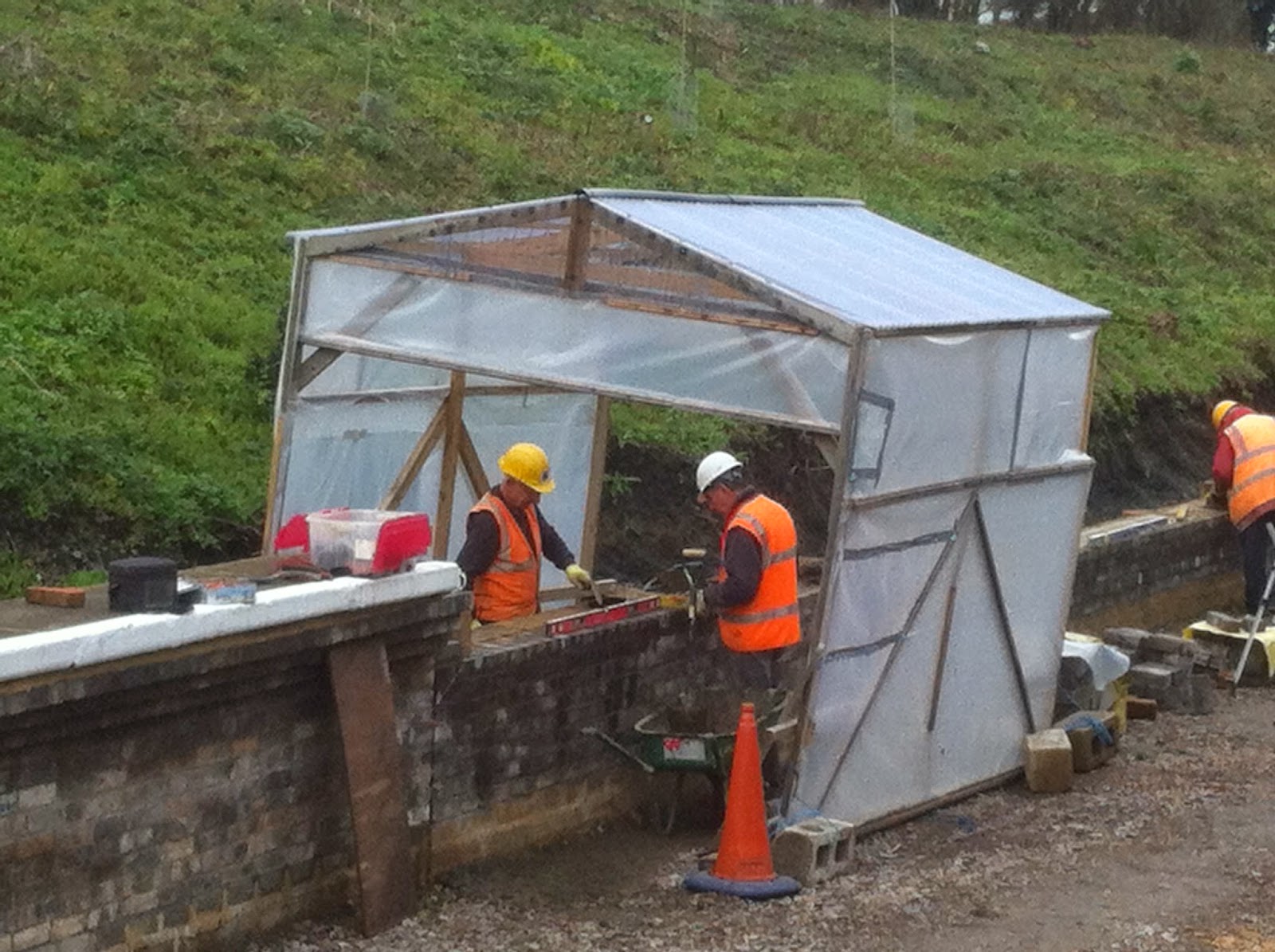 Back on site  a bricklaying party were  continuing with Platform 2C. Tony and Roger B were working the southern end, and managed to get  as far as the first course of corbelling. 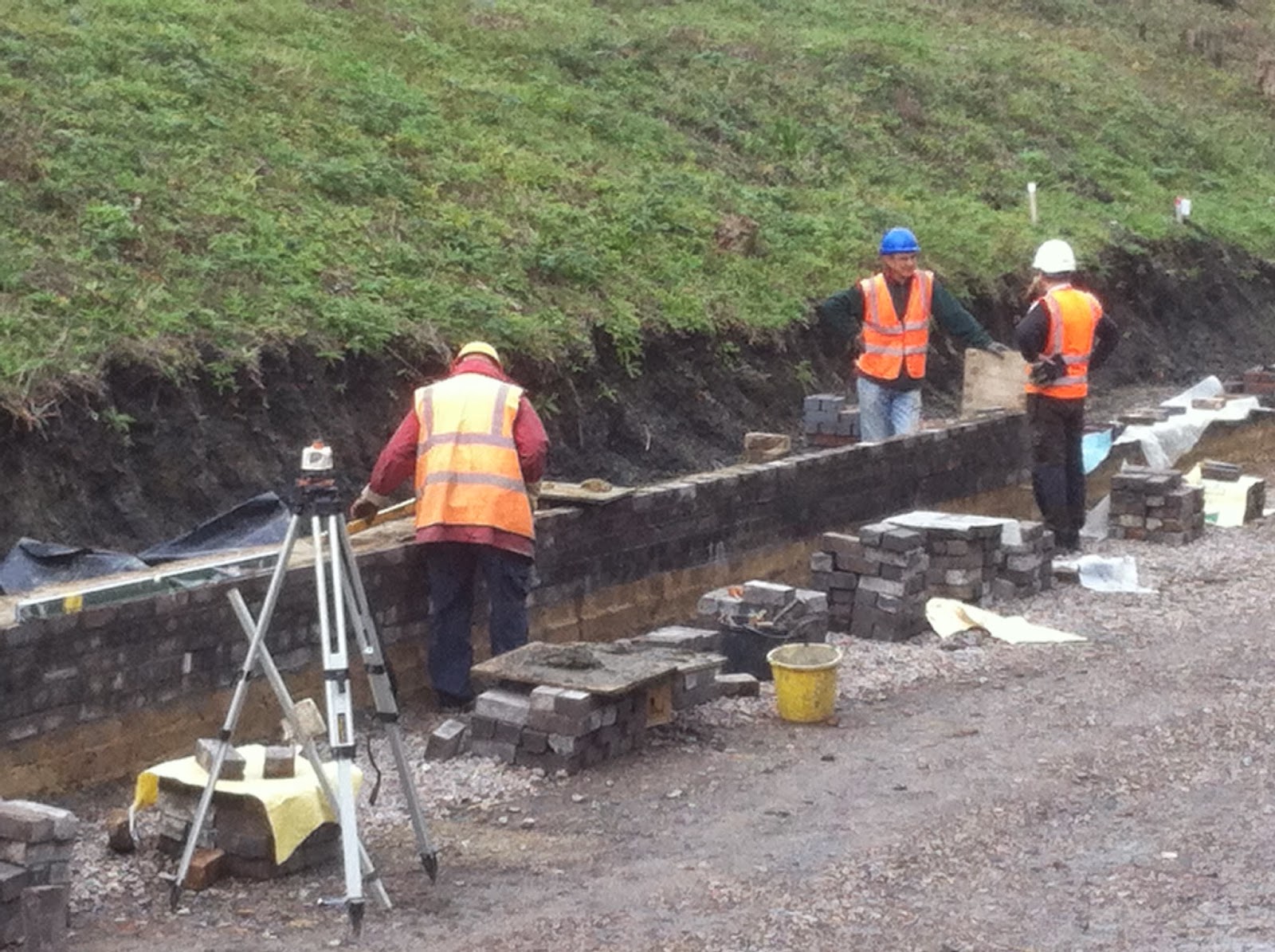 Clive and Roger J continued with the centre section. In total 400  red backing bricks were laid and 160 blues. That's a pretty impressive total! 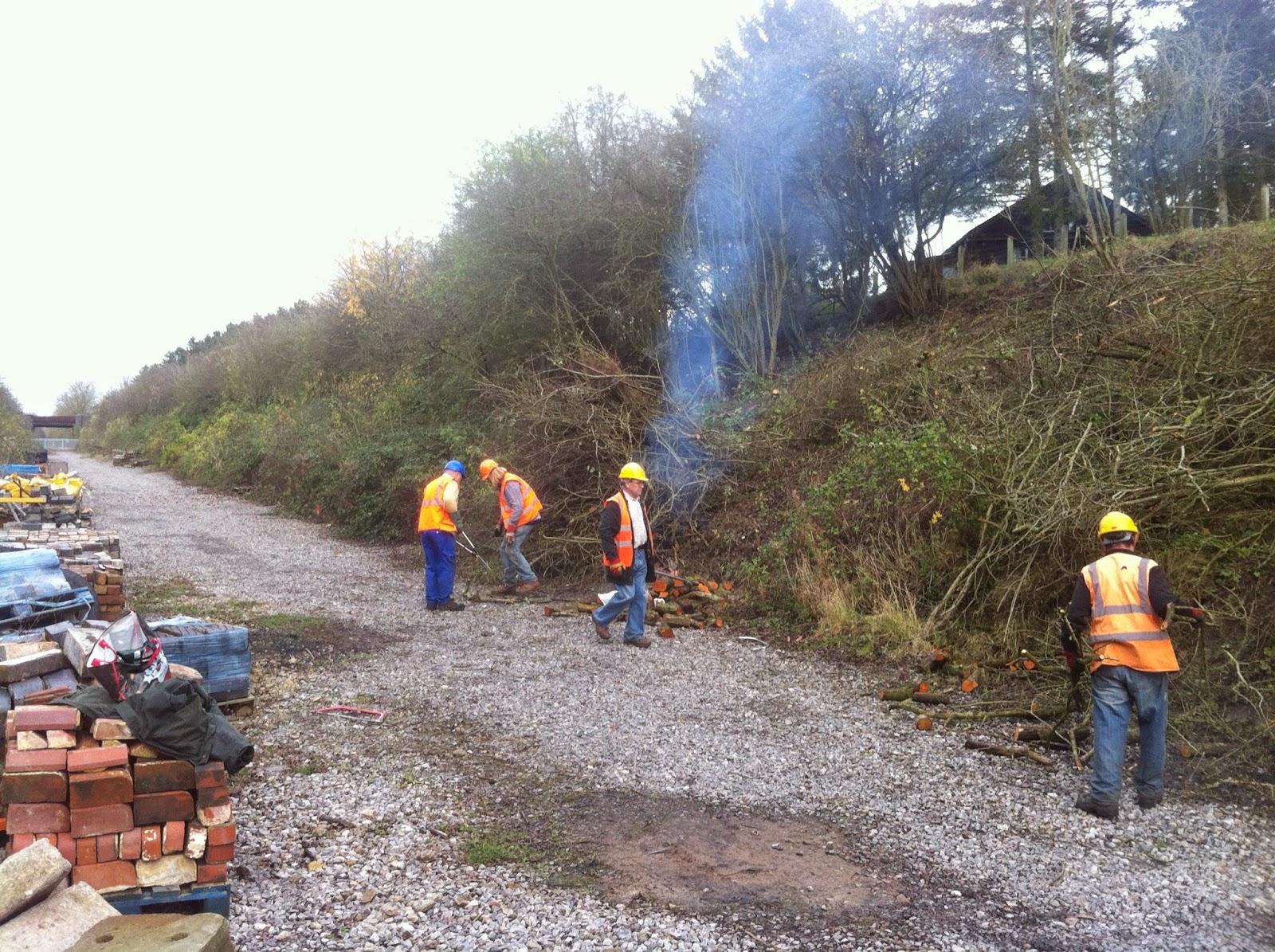 Farther north a gang of fire starters continued with the clearance of the eastern bank (I have been told that it's not an embankment in a cutting they're pedantic in Canada you know!) All I know is working at 45 degrees all day plays havoc with your knees and you certainly know you've done a days work at the end of it! 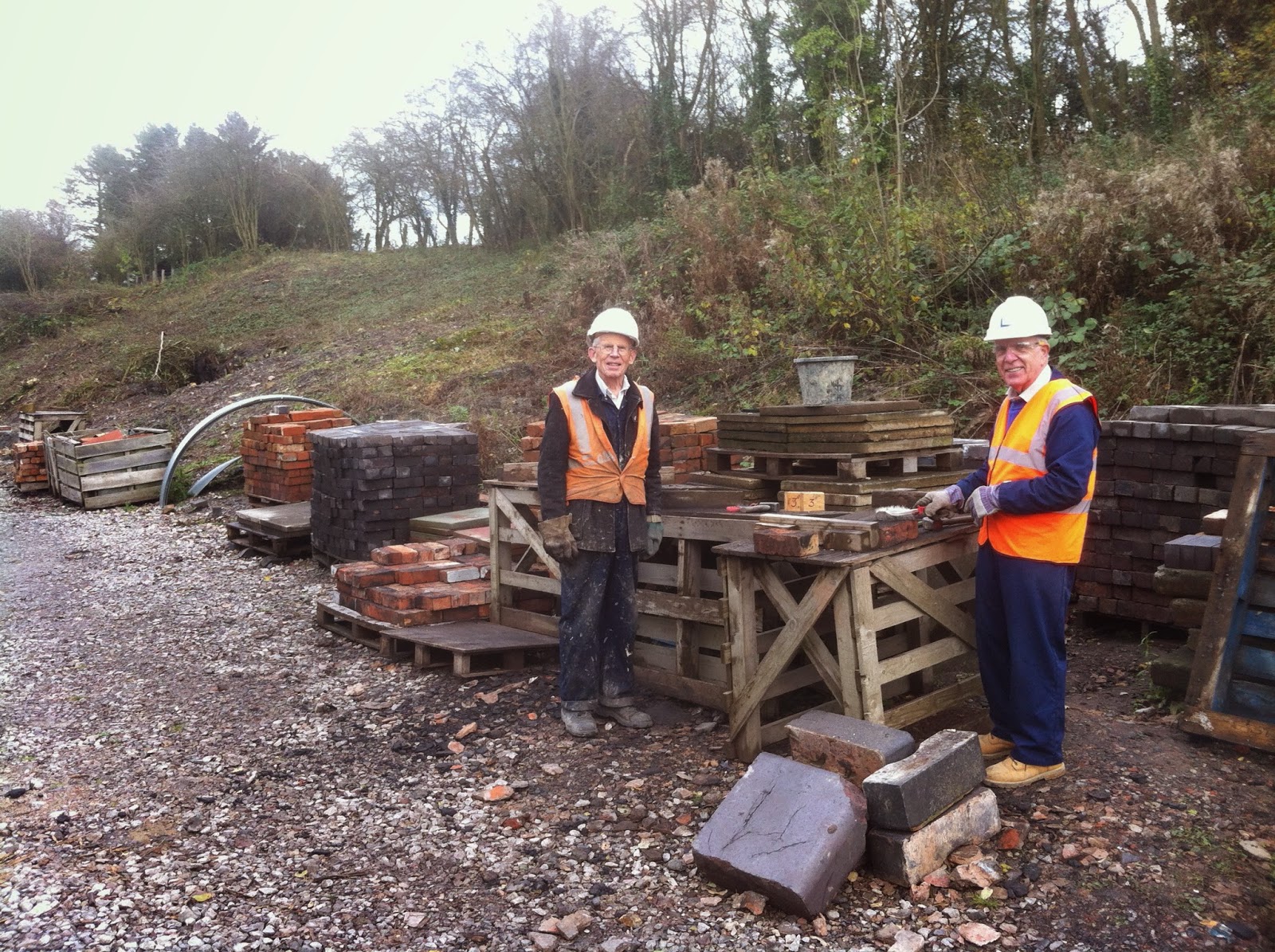 The brick cleaning continued with renewed vigour  with the extra supply of reds from Winchcombe. Roger H and Robin smile sweetly when asked. Half of the bricks cleaned are now in 2C!

Down on the eastern Boundary Vic started the green palisade fencing, at the northern end. Four panels were completed. I have to say I got absorbed in helping and instantly stopped taking photos! More on Wednesday.

One triumph  of the day was on the Signal Box, where John S mange to get the bracing bars connected  between the lever frame the rear trimmer. Again more pictures on Wednesday. I hope our proper photographer is back then!
Posted by Bill at 21:30

I am wondering why you are not pushing on with the brickwork on the signal box. Are you hiring the temporary fencing, scaffolding and hoist? If so, they probably cost over £200 per week. Prioritising the signal box over the platform brickwork would reduce the length of the hire and its cost. Perhaps some professional help could be paid for by reducing the length of hire - I guess 10 working days by a bricklayer would see the brickwork complete, allow you to get the roof on and do more interesting stuff during the winter months. As it is, my guess is you've got about around 25 weeks (£5000?) of hire if you carry on at present rate of progress.

I dont want to appear negative but do you think it would have been wise to have completed the signal box rather than helping with the CRC platform rebuild.
Don't take this as criticism as the work being done at Broadway is to be admired

If building the signal box was a matter of buying in materials and hiring labour it would have been finished long ago and we wouldn't be incurring nugatory costs. However in volunteering environment the right skills are not always available at the right time, or in the right place -Cheltenham vs Broadway. Add to this individuals politics and rivalries and therein lies the reason for our perceived lack of progress. But it has to change......

Regarding cuttings, the sides are generally know as 'Cutting Slopes'.
These are then differentiated as 'Upside' and 'Downside'.
Hope this helps.
John Fancote
BR Bridge Engineer (Retired)

A very good point about the signal box progress. Having built an extension to our cottage, albeit in stone, once the winter sets in life grinds to a halt. You will need that roof!

Completing CRC platform first gives them greater flexibility in running more trains to and from CRC, by having two fully operational platforms. Thus increases more people to rhe race course. Generating extra revenue for the railway. Patience is the key. The Signal box and even the whole station WILL be built. Just have to wait!
As the Guinness advert says ''Good things come to those who wait!'

The signal box will become more urgent when the window frames are ready for fitting surely. Just hope Jo will soon be back in working order !

I don't envy your tasks; having to be all things to all men, whilst keeping the plates spinning. I can well imagine the politics and rivalries which exist, having so many volunteers, departments, projects, and budgets for the railway to consider. I am sure your patience and diplomacy will out in the end.
Thanks for what you do.

An 'amen' to CiF's comment. Herding cats (volunteers being even more cat-like than ordinary employees) is non-trivial (been there, done that in another life), and a pretty good job of that is being done at Broadway - one only has to compare what's there now, physically, with where things were a couple of years back to see that. Sure, there will be occasional glitches - since when were people perfect? The measure of a project is not whether it has glitches, but whether it can overcome than and move on to produce results - and so far, Broadway is producing. Long may it so continue!