A cold but sunny day today, which encouraged 21 volunteers, split into several teams. At the northern boundary of the site three volunteers continued with the erection of the security fence, which is now almost complete: 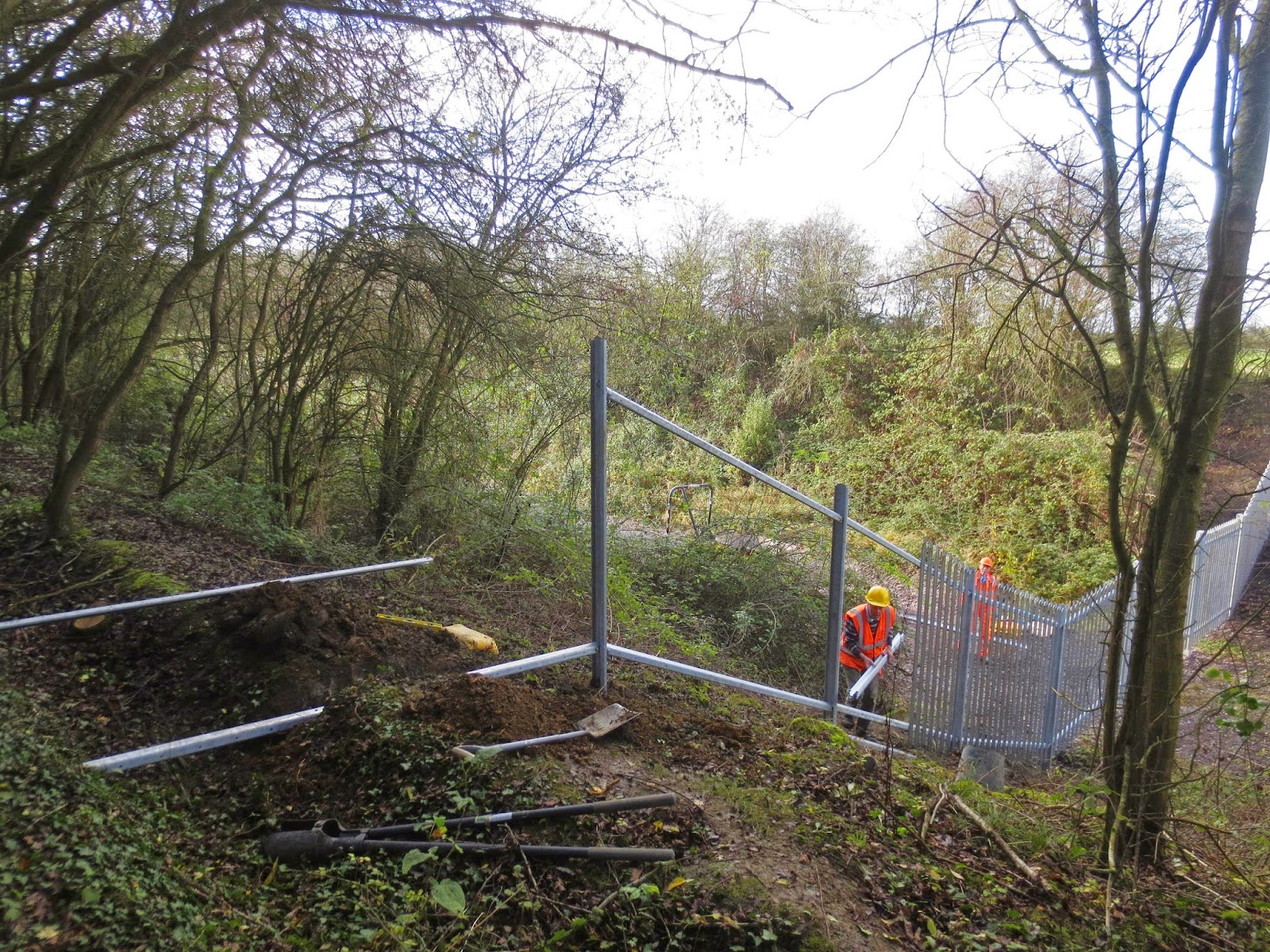 One more panel needs to be erected on the Evesham side, while in the foreground the last post is now in and awaits completion of the spear assembly. Another day's work should see this through. 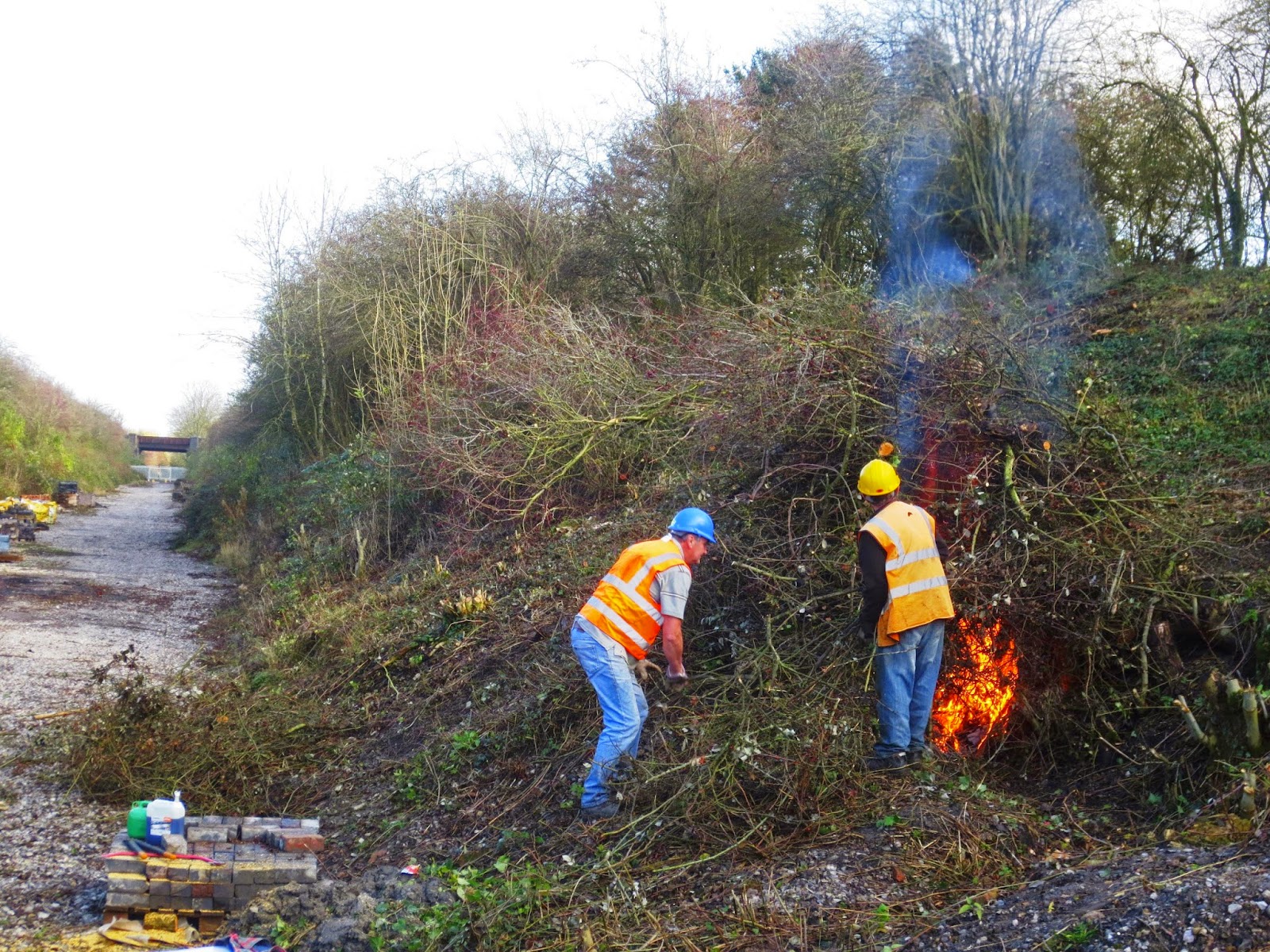 A second team of three carried on with the cutting side clearance. A goodly fire was started, here seen in the remains of the former horse dock headshunt. Quite a few logs came out of this exercise, which were eagerly gathered up by members with log burners at home. In the distance the new gate at the northern boundary can just be made out. It certainly looks the business. 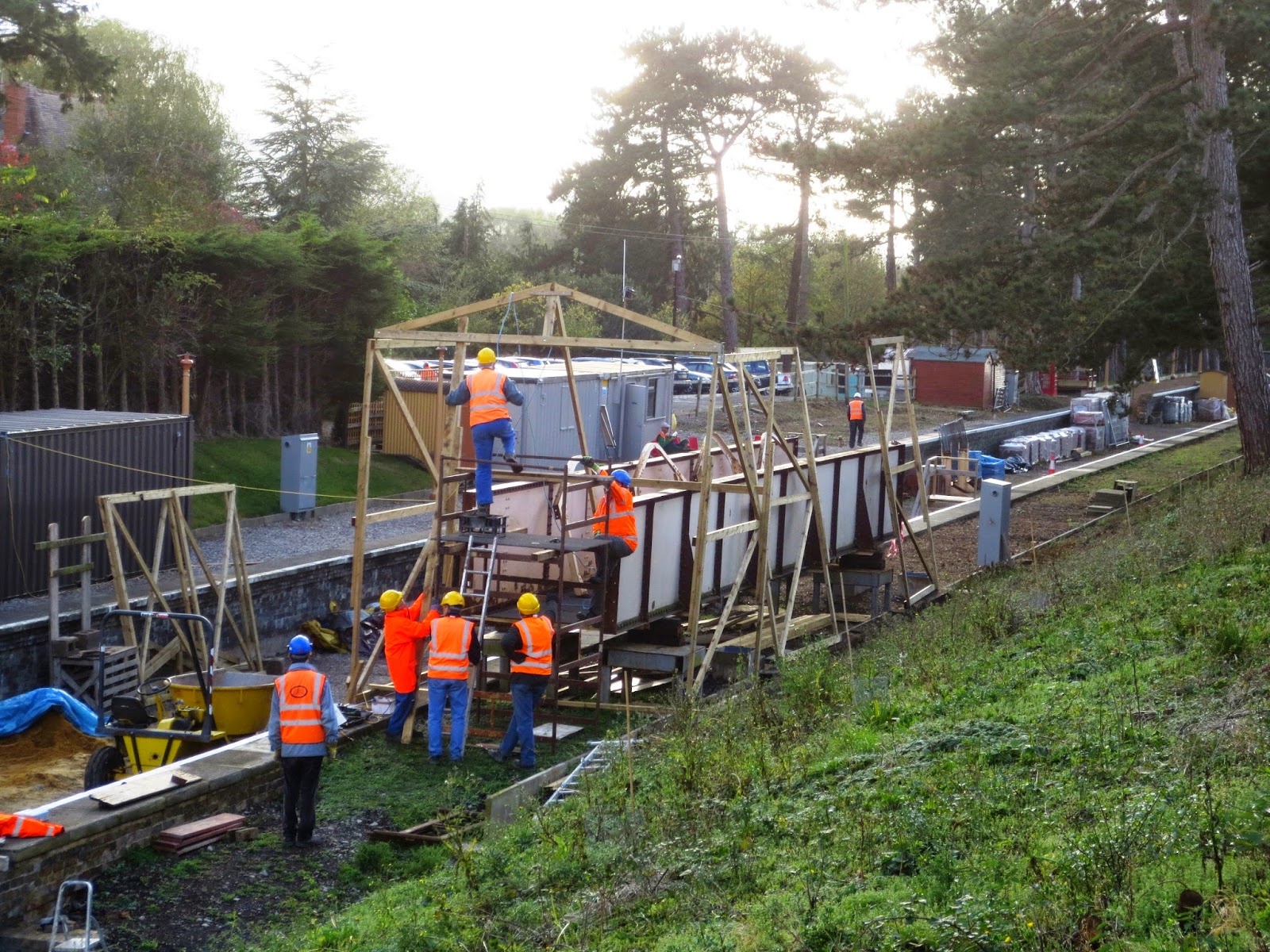 The HIA footbridge also received attention from a large team. Today was the day we started the assembly of the panels making up the shelter, under which we can carry on work in the dry, and prevent further rust. The shelter is high enough to accommodate re-erection the hoops, once they have been cleaned and repainted. In the picture above 'Hitchen Hall' is in the process of assembly, although still a little wobbly on its feet. Yes, it does take three volunteers to hold a ladder! 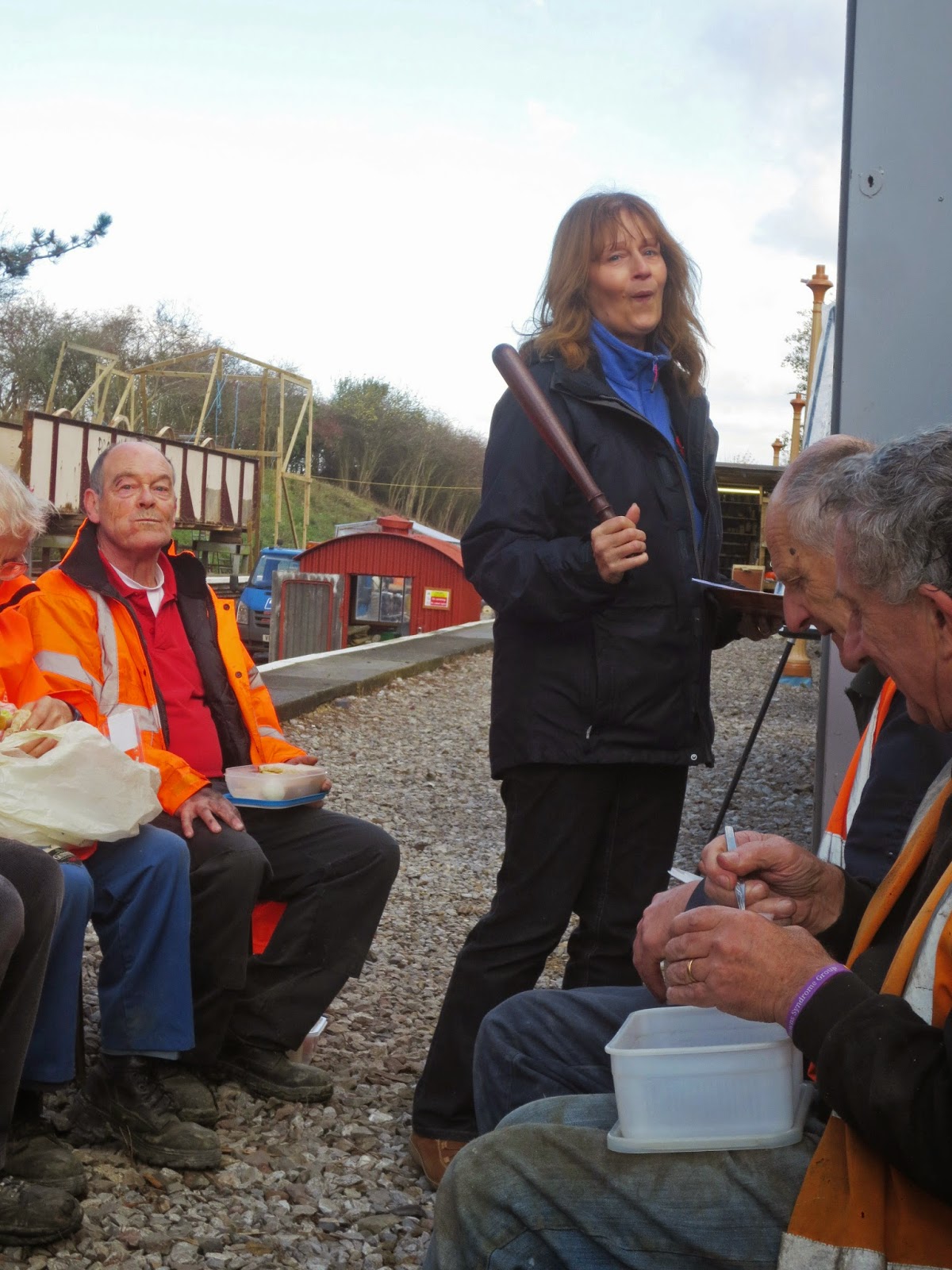 Away for a routine medical today, our chairman was much missed by the team. His gentle appeals for volunteer effort were replaced by an alternative today, and we all sincerely hoped he would come back soon. (Saturday, we understand). 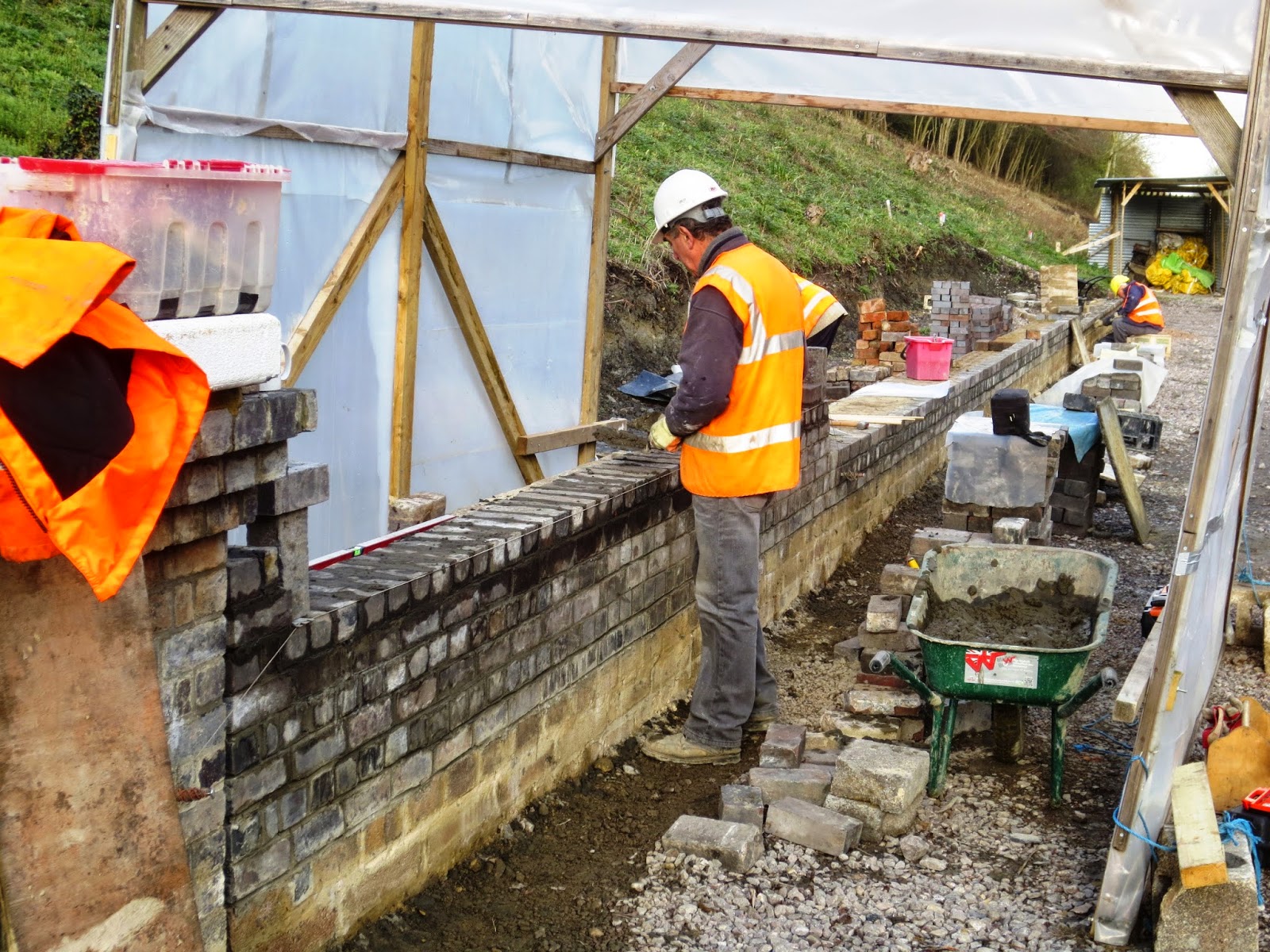 With the excellent weather conditions, work on the last stretch of platform wall on 2c proceeded on three sites at once. Three rows of blues were put on the section nearest to the camera, then two rows and in the background on his hands and knees, Bob laid down a long single row of blues right up to the end, which he also backed up himself. Good progress !

Equally good progress can be charted on the signal box, which drew four volunteers today, two laying bricks and two supplying the brickies with mortar and new bricks. 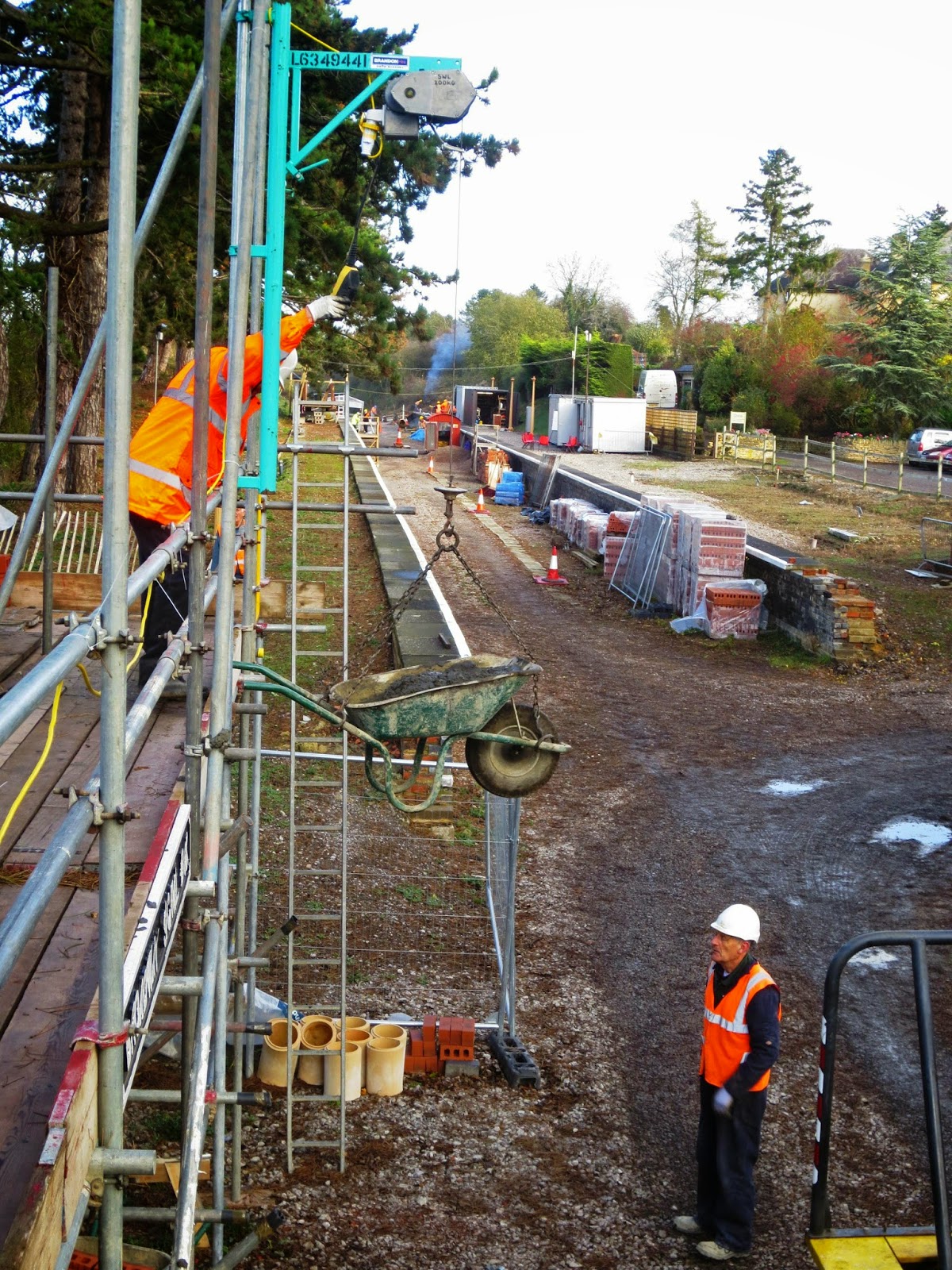 Once again, the hoist proved invaluable, as what is going up is heavy. In the picture on the left we can see Keith dispatching his latest production in a barrow being hoisted up by Paul. The hoisting bit is easy, but the landing on top between all the scaffolding struts is the tricky bit.

Interesting to see also is a supply of chimney ducts, ready for the fireplace to be installed. They look like little macaronis, at the bottom of the ladder. Great stuff. 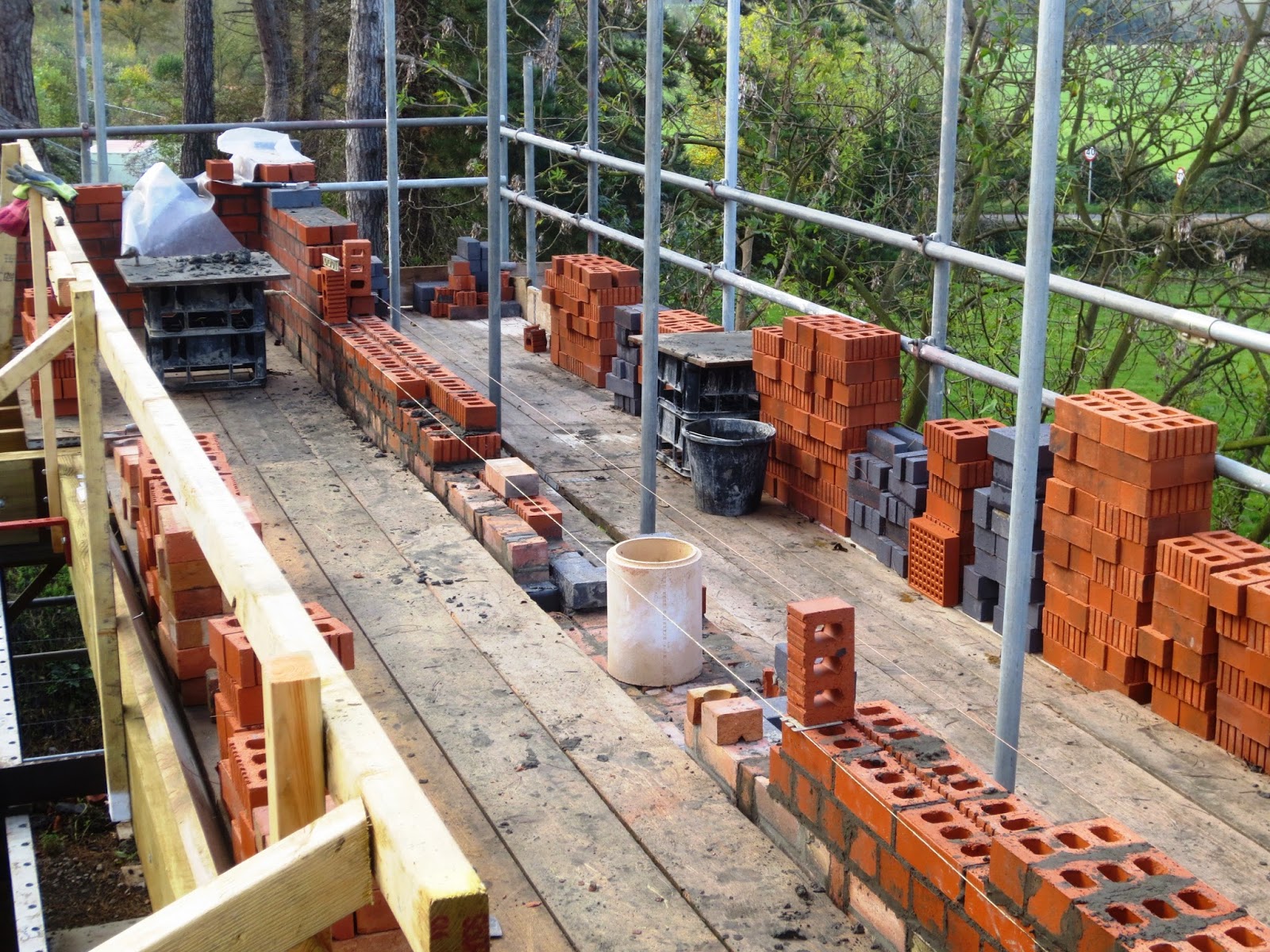 This is a picture of the current round of brick laying, taken at midday. With the floor joists now in, it is possible to lay scaffolding boards on the floor, and in this way brick laying on the rear wall can continue. Our men made good use of this opportunity today, as they got no fewer than six courses on. The little 'macaroni' in the centre is placed to show where the fireplace will be. 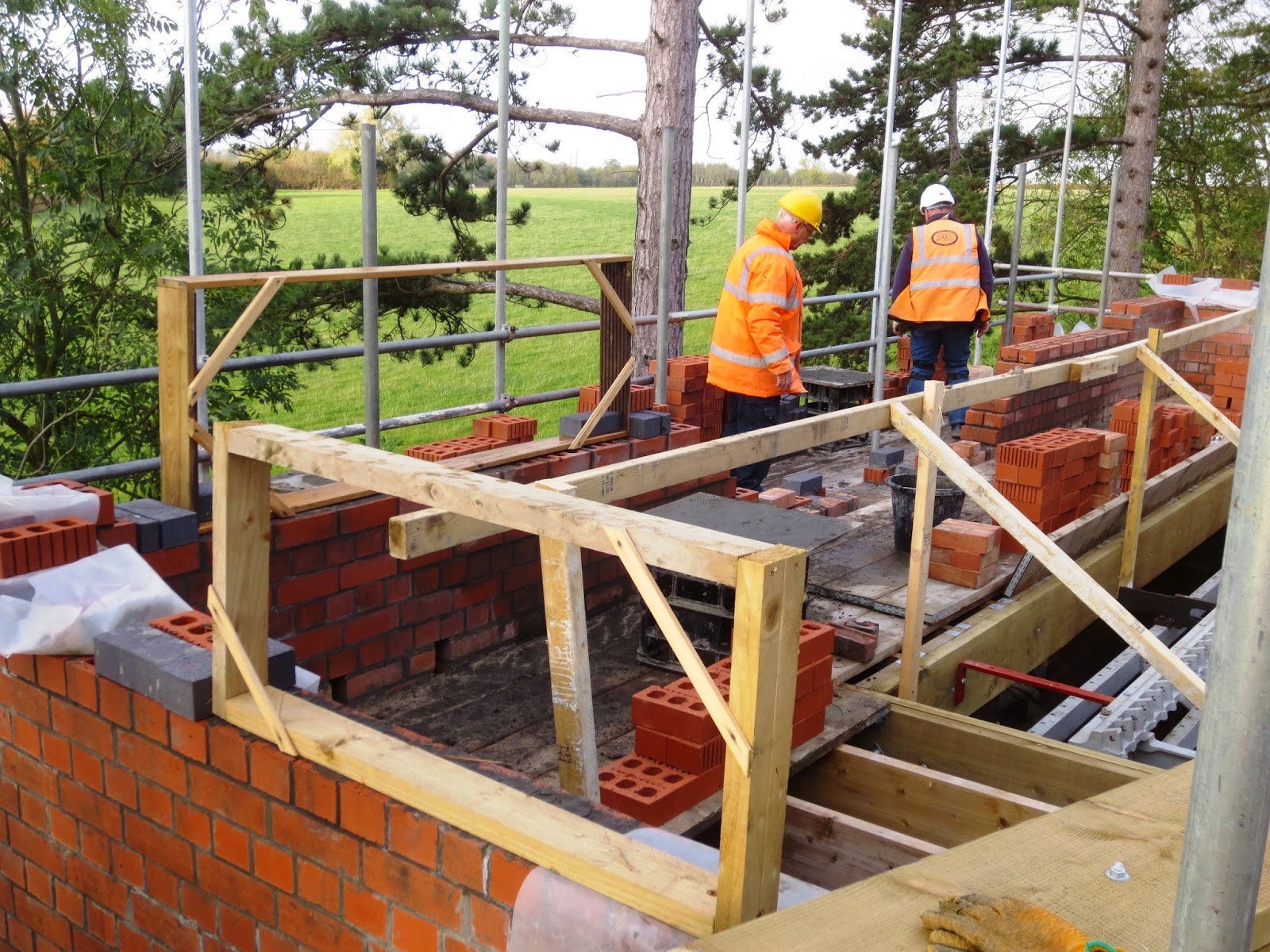 The picture above was taken at the end of the day.  Amazing progress - the six new courses can be identified centre left by the darker colour. This area has now reached window sill level, and in order to be able to build around the future window, a temporary frame has been put in. The actual (hardwood) window here is on order. Centre right you can see the double trimmer that was placed last week, using the beefy joist hangers manufactured by a volunteer. A red bar (one of several still to be placed) connects the trimmer to the frame, so that the floor doesn't move when there is a forceful pull on one of the levers. Clever stuff. 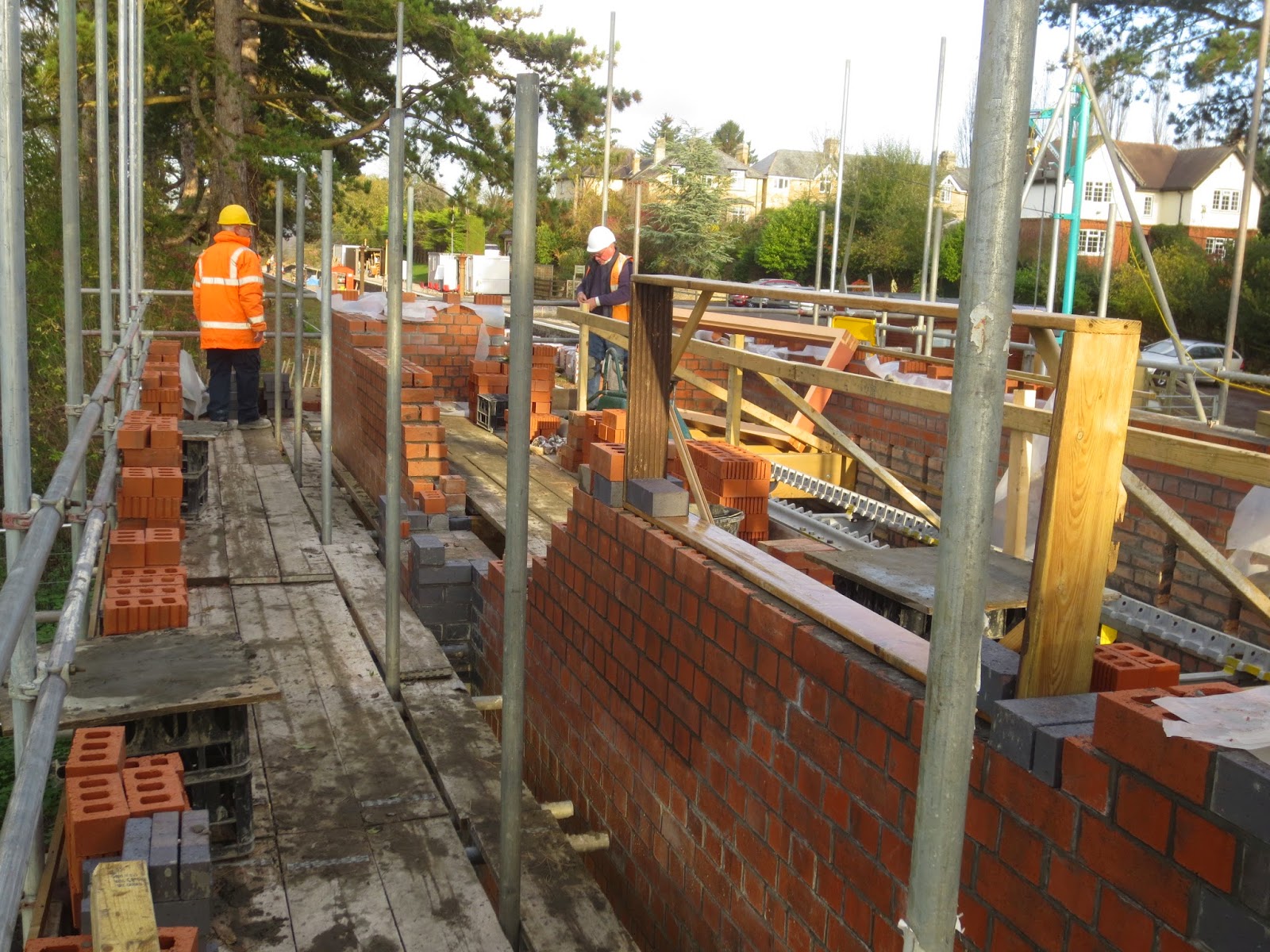 Here is a view of the rear wall, at the end of the day. Again, the day's work can be identified by the wetter mortar, which has just been pointed. The area round the fireplace has been left vacant for the time being - it should be filled in in two weeks time, we ascertained. Ample supplies of bricks, hoisted up today, await laying on the left. 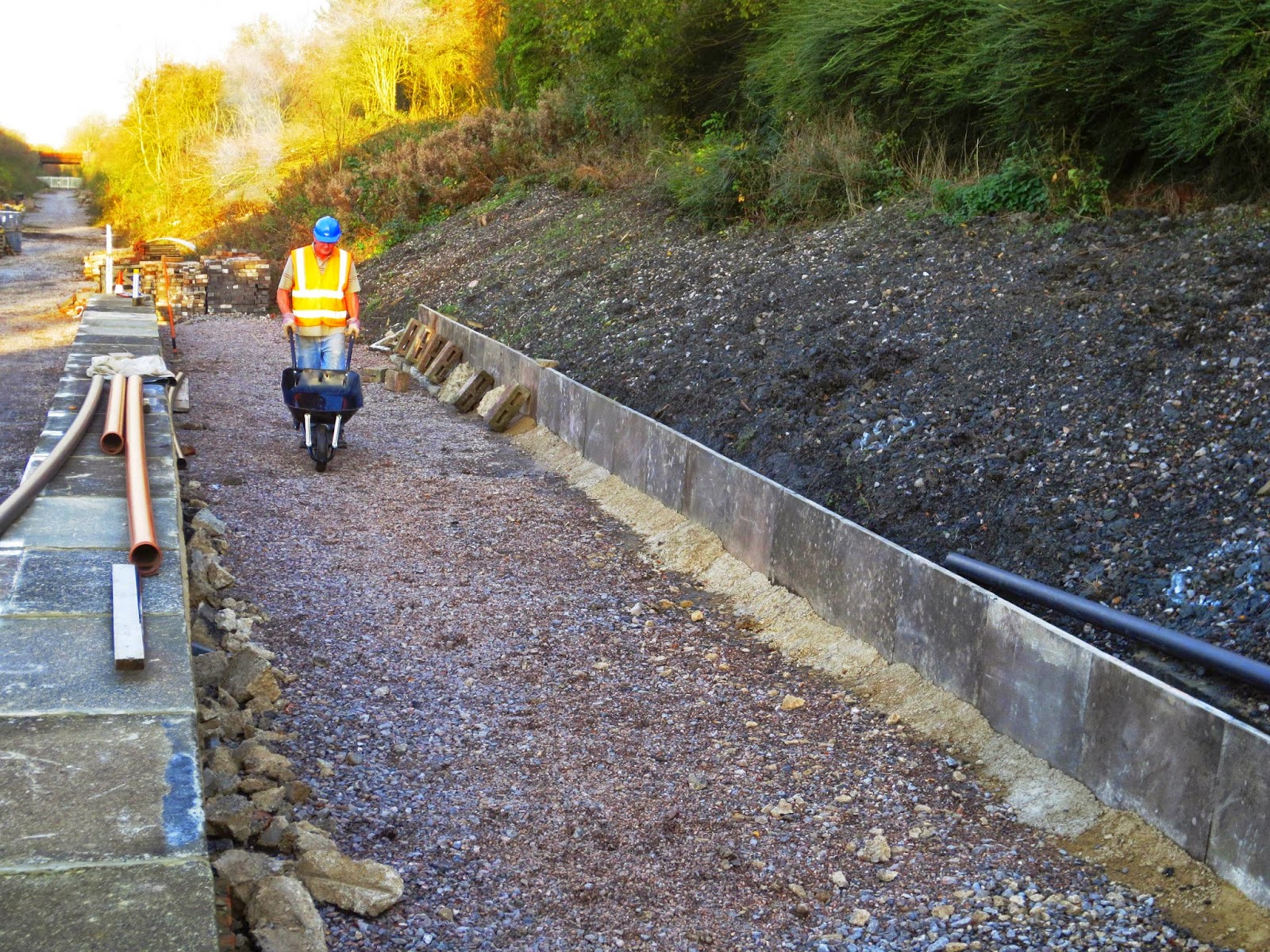 A last shot of 1c here, showing the further progress made by Rod and Terry today. They laid an excellent 8 slabs, reaching the end of the regular platform, and the beginning of the slope downwards. Once set in the concrete, the slabs can be back filled and the area above graded and seeded with grass, before the weeds come next spring. We can also put in the ducting and former box for the last two lamp posts.

Finally, an announcement: there will be a an additional blog, now to cover the track extension to Broadway. Although work won't start until next year, there is enough preparatory work which we believe will interest our members and shareholders. You can access the new blog here:

Please note that it will only go live tomorrow morning, so there's no need to click just yet. It still needs a first posting to be written, but there is a news item today which is interesting to report.

I would just like to say what great progress was made today, on all fronts. Well done to everyone! It was so pleasing to see progress once more on the Signal Box. Jo was able to capture in pictures and words the essence of a great day.
My day away was very successful and I look forward to seeing it all for real on Saturday.
Bill

Great news about the line extension blog, that should be interesting indeed :)

Maybe it's time to start calling it the 'Broadway footbridge', and not the "HIA footbridge"? :-)

Excellent news about the new blog - although I hope it the effort of writing that one won't cut too much into the others, especially the Bridges blog (which has not seen an update recently, hint, hint :-).

Might consideration be given to building a Rumford open fire place? Conventional open fires are only 25% efficient, three quarters of the heat available from the fuel goes up the chimney.

Rumfords are twice as efficient, because they are wider, taller & less deep, so that the fuel & any smoke, burns within the confines of the fire box. Thus, 50% of the heat available in the fuel is radiated into the room. My son & I built a Rumford 4 years ago & it has proved itself invaluable during electricity outages.

By stacking the wood vertically, any smoke (which is wasted fuel) is ignited & burns within the fire box & radiates warmth.

Great for cooking as well.

Thanks for the idea of a more efficient stove, Perry. However, do remember that we are a 'living museum' and we are building a replica signal box and station. We aim to show what it was like in 1904. All our locomotives are authentic, and so should our buildings be.
The signal box is getting a basic fireplace, and then it's up to the S&T guys to do what they want with it. They may use it as a fireplace, or else use the flue for a pot bellied stove, found in the majority of boxes. Either would be right.
I have tried to lobby for a (historically correct) coal bunker within the locking room, but so far without success....

Mmmmmm....maybe not the best picture of safe use of appropriate scaffolding

Re anonymous and scaffolding above.... Always someone there to pick fault at the slightest thing. Please give it a rest. These blokes give up their spare time and work damned hard.
I notice you have the courage of your convictions and post anonymously.

We will always listen to advice from an experienced professional - keep it friendly!

Nobody should criticise from afar. These people do a fantastic job in their own time, often in poor weather. Go and join them to contribute in a positive way please.

Bill,
Shame you were chastised about your afterburner comment Just returned from sad occasion in England to see new blog for the extension. Great news. Hope all you retired guys have good physios a lot of back breaking works planned.
Rod

I can take the rough with rougher!
Thanks for the Spitfire fly past also....