Eight hand picked men assembled on site today to receive the centre span from the former Henley in Arden footbridge. This was a minutely and well planned operation, which, we can say straight away, went off pretty much without a hitch, and the centre span is now on site !

The eight were split with one at Wishaw, supervising the loading, and the other seven at Broadway, making the site ready for the arrival of the crane and lorry. Fences needed taking out, piles of pea gravel shifted, heavy steps moved about, neighbours warned, parked cars removed, cones set up, CCTV shut down, reception areas marked out, electricity supplies cut off, cables moved, emergency tea making facilities put into place and tested. Oh yes. 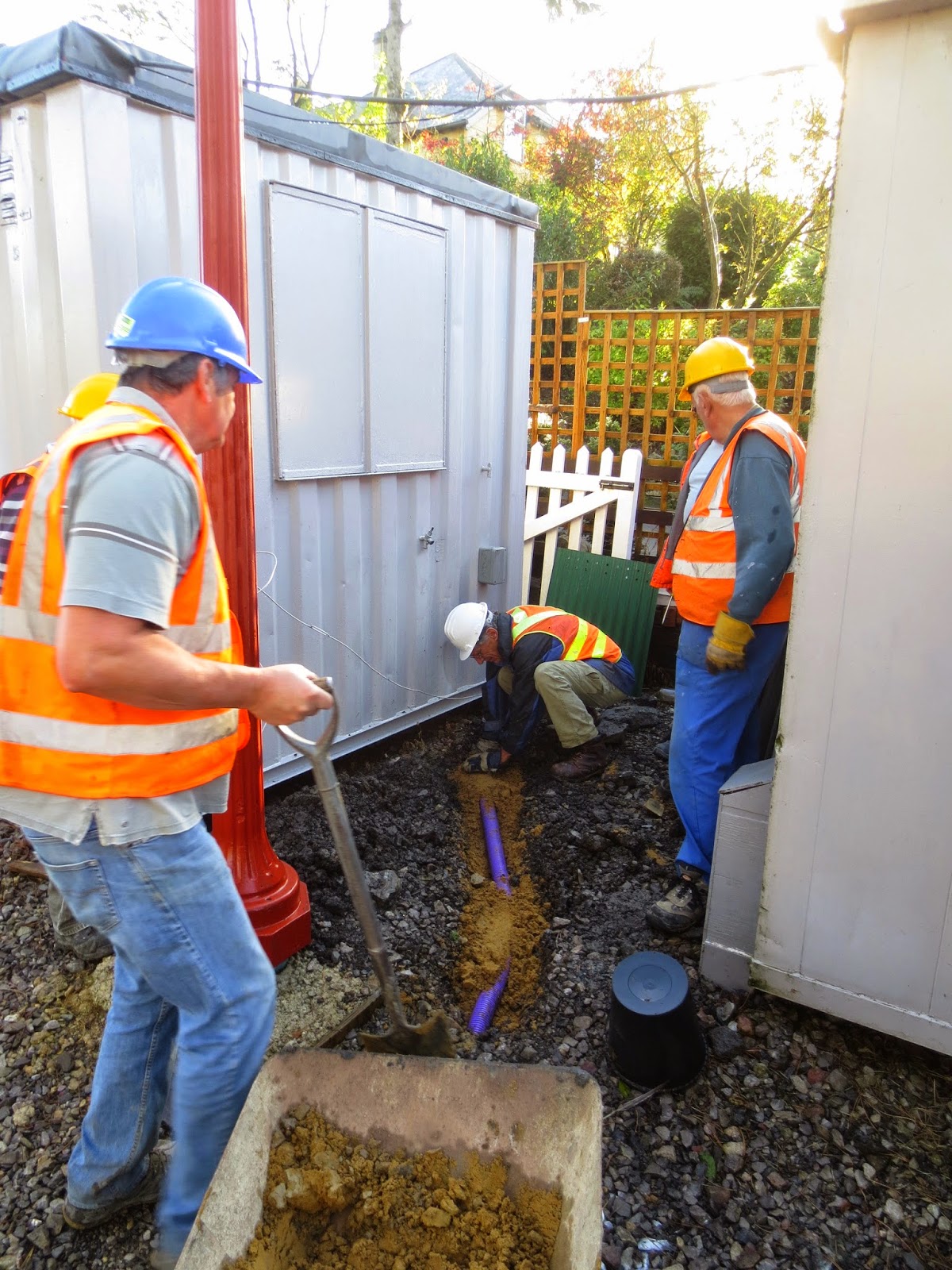 About half way through the morning, we felt we were ready. The crane came. It was a very compact model, and manoeuvering it around the place was no problem at all. It was set up outside the original station site, and we waited.

News from Wishaw came that there would be about an hour's delay, which was not unexpected.

But - the devil makes work for idle hands.... we decided to finish off the laying of the new communications cable, and plumbing it to the office. The lamp post on the left had also been on our list of things to do. Once planted, a year ago, it became clear that it was far too high, and so we were keen to substitute it for a shorter one. If you know of a GWR No.1 lamp post that is available, we would love to hear from you!

If only we had a crane to lift it out...
But wait, we do have a crane, and it's standing idle with the meter ticking. A crew of three quickly set about removing the weak mix concrete around the base, and disconnecting the ducting leading to it. The crane crew were keen to have a go to get their hand in, and to kill time while waiting for the load to arrive.

The lamp post, an old street light from Kingston upon Thames, was removed easily and now awaits disposal. Any takers? It would give our funds a little boost.


Finally, at around lunch time, the centre span arrived on its low loader. Because of the height of the load, it did not fit under the bridge and went down Broadway high street instead. Anyone photograph it there? What a good advertisement for the railway that must have been. We are here. The low loader reversed up the drive, and parked beside the fence. The crane was set up outside the B&B. We unloaded four heavy trestles from Wishaw, which were lifted on to platform 2, where the centre span will reside for the time being, while it is being worked on. Also part of the load were the two trestles that support the centre of the two staircases.
Once empty, the centre span was lifted off the lorry and parked on platform 1. You can see a video of it being unloaded here:
http://youtu.be/VA-P8X5cYhs
The final destination of the centre span was at the end of the completed section of 2b, and this needed several lifts. After unloading the centre span, the crane moved to a new position for a second lift down on the trackbed. A load of pea gravel needed moving along a bit, but with the help of George Law's mini digger this was easily done. 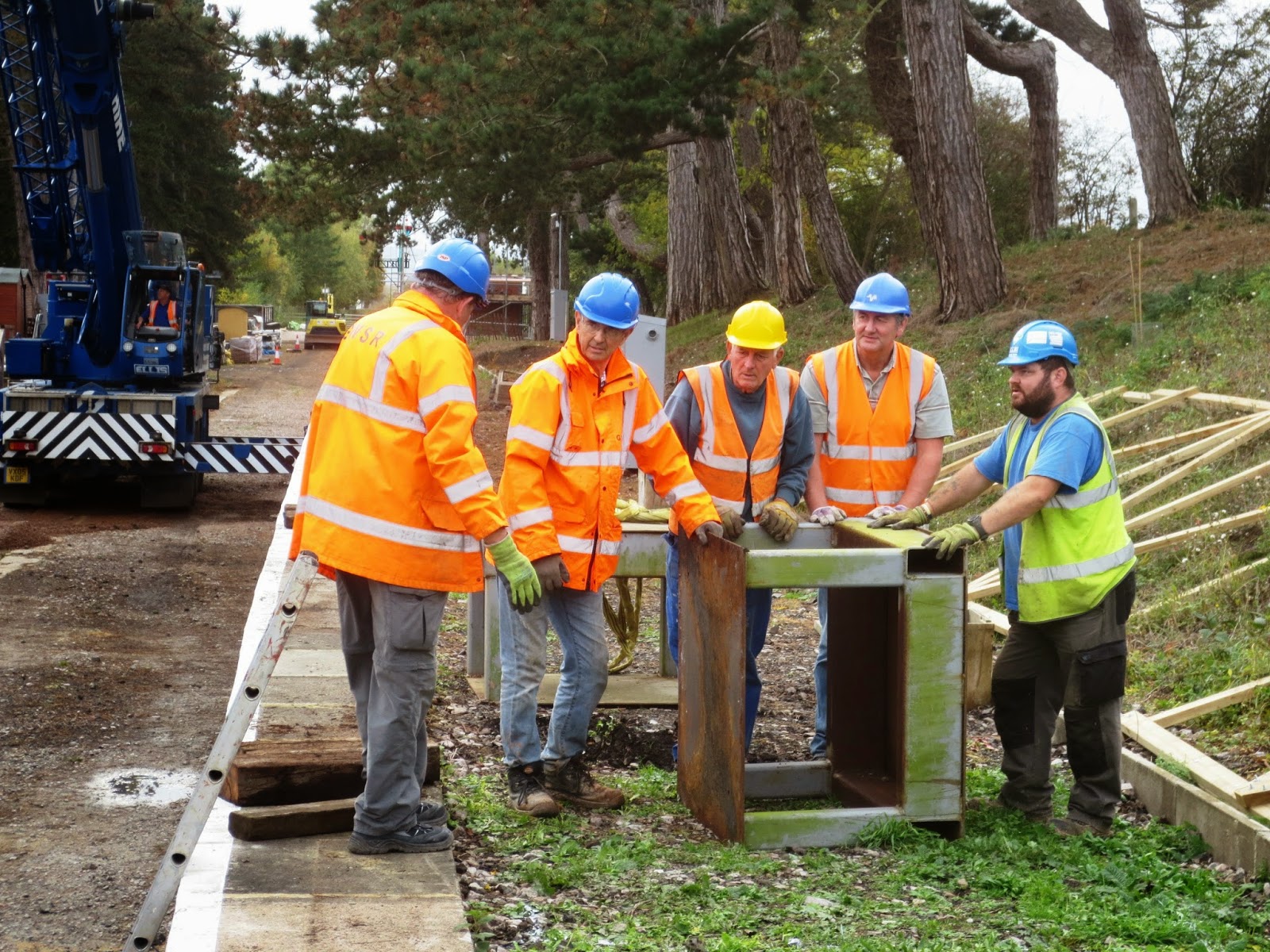 The four supporting trestles were then dragged along 2b to their new positions, and levelled. On the right you can see the newly made framework for a protective 'shed' which will encase the centre span for when work is carried out on it. 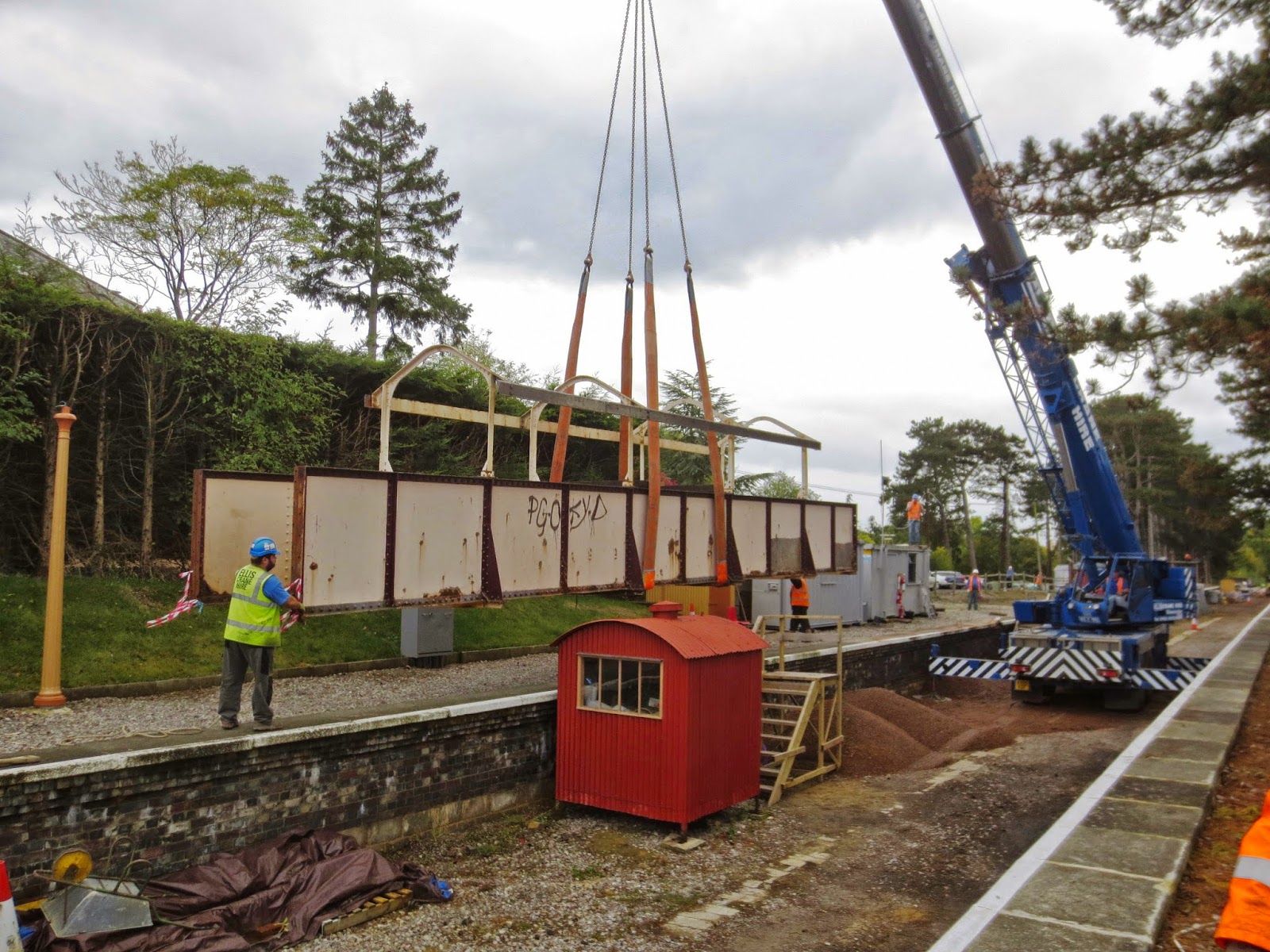 Once firmly established in its new lifting position, the crane extended its huge boom once again, and gave the span its second lift. It was moved from behind the office and cabin (in the picture above) to a position in front of the brown container (just off to the left in the picture). 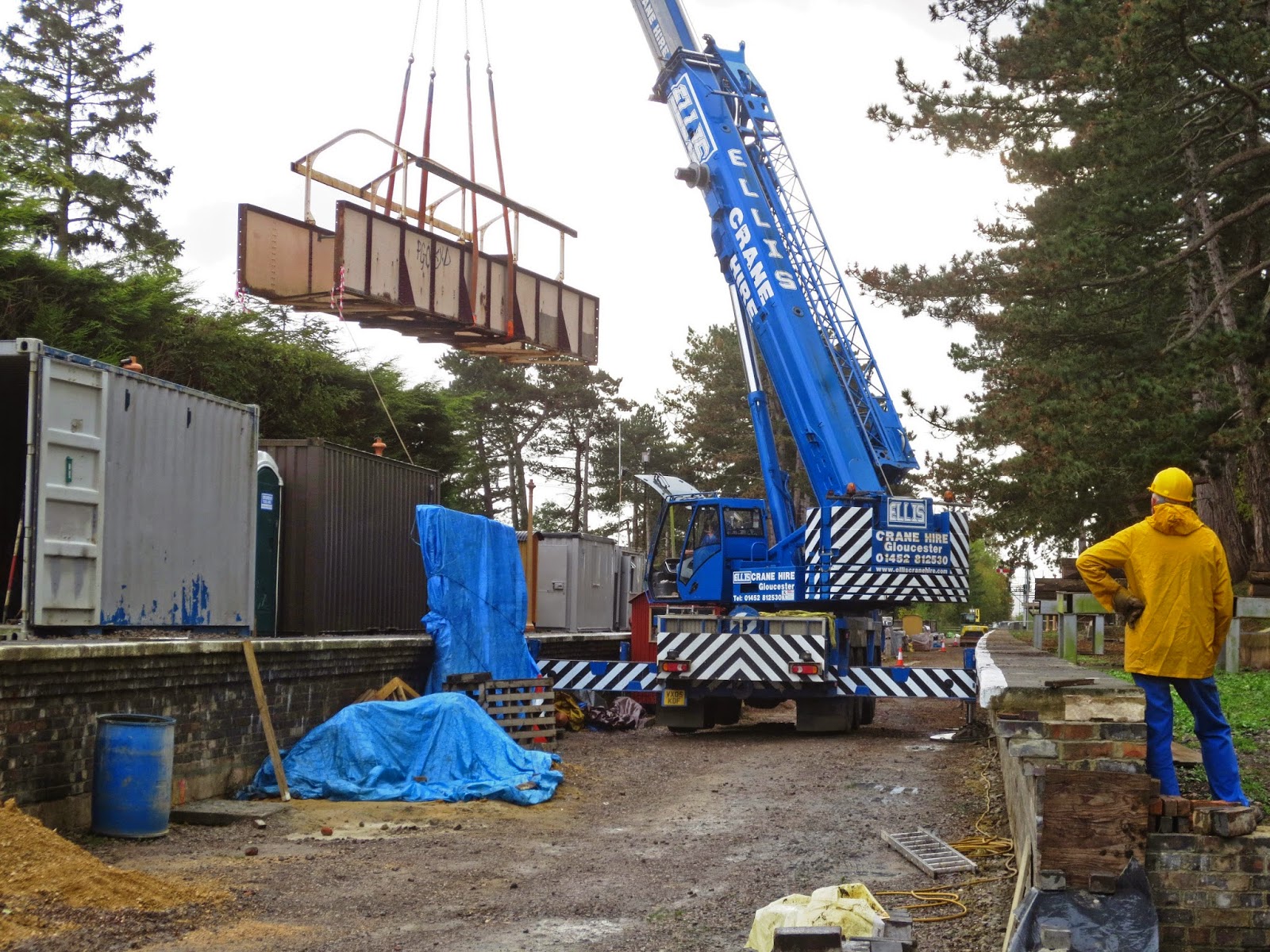 The crane then folded itself up again (quite a laborious business, there is a lot to it) and moved along the trackbed to the third lifting position, now by the brown container. From here the final lift could be entertained. In order to clear the lamp posts, containers and B&B hedge, the footbridge went way up into the air. 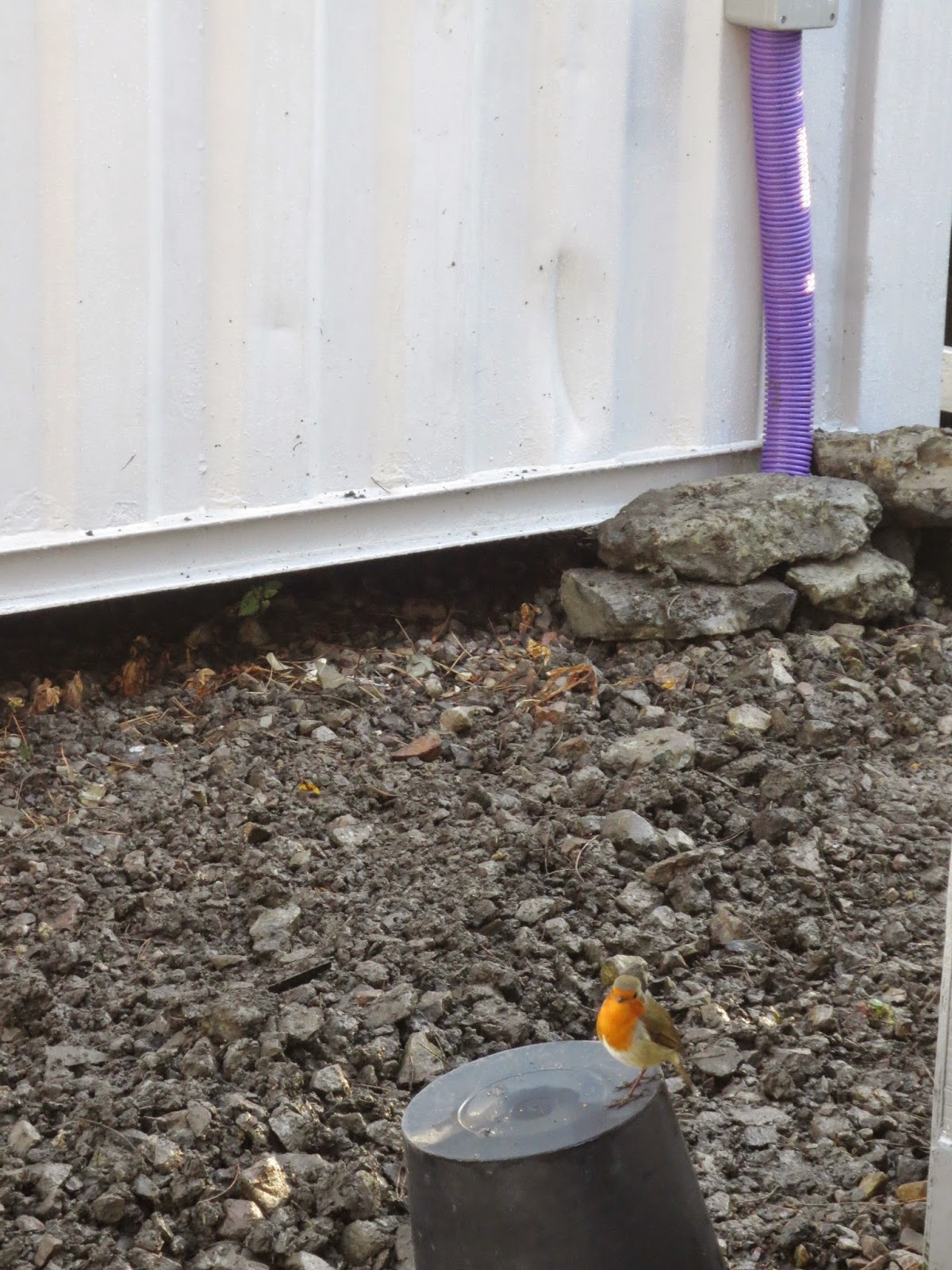 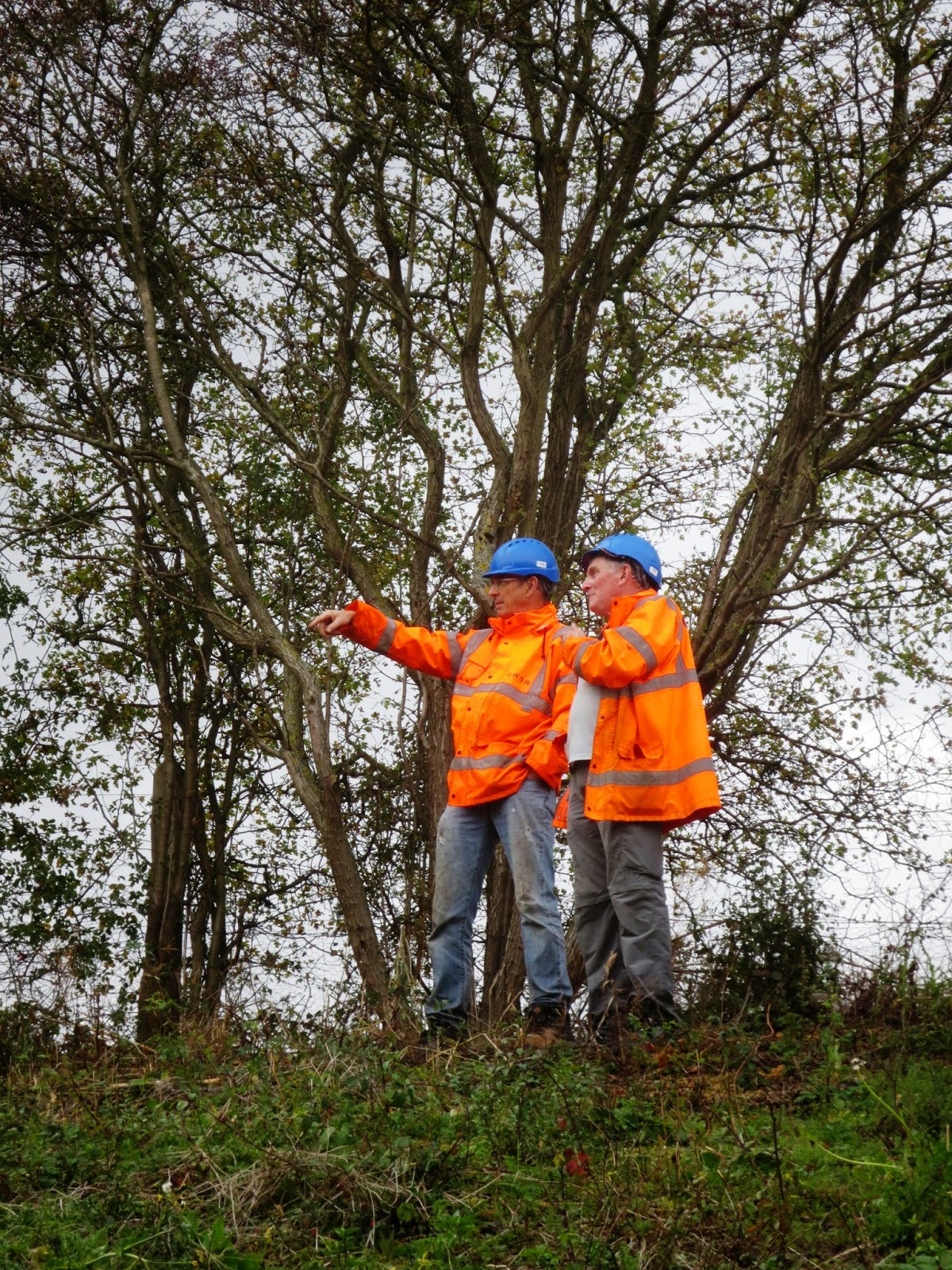 Given the clear riskiness of the operation, management retreated to a distant and elevated location, from where extensive arm waving could be practised.

Meanwhile, a friendly Robin had spotted the diggings by the lamp posts, and got away with a huge worm. Well done, little chap !


At one point, the centre span was exactly square across the trackbed, thus giving us a good idea of what a footbridge here might look like, albeit much too high today. The length looks about OK, guys, that's a relief. So it should be; the HIA and Broadway footbridges are almost identical, which is why we were so grateful when we were able to secure it.
The waiting trestles are on the platform on the right.
Finally, the span was lowered very carefully on to its waiting trestles. This temporary resting place is only a few yards from the actual location of the original footbridge, so when it comes to final assembly, the next and final lift should not be too difficult.
Job done ! Well done Jim and crew. Brilliantly executed, that was.
Within its temporary shelter, the span will be cleaned, repaired and painted. The remaining pieces - two towers and two stairways - will follow in due course.
Today's lifting went without a single hitch - well almost. A platform slab got broken, fortunately by a volunteer, and not the crane. It can be replaced.

As we tidied up the site, we were approached by a Canadian couple staying at the B&B. They were most impressed by our plans to rebuild the station true to its GWR heritage. ''It will be a jewel of the world'', they said.

Thanks for the write up Jo. In the end it was a very successful day despite several problems along the way. My grateful thanks to all the Team: Roger, Brian, Vic, Dave, Jo, the two Peters and our guest electrician, yet another Peter. I hope you all went home with the same buzz of satisfaction as I did.

Onward and Upward to quote a well worn phrase!!

A job well done! Congratulations to all concerned. Isn't this what our Project is all about - attempting the near impossible to realise our dream of returning Broadway to its former glory.
Bill

You take your eyes off this blog for a few hours and a bridge turns up! Seriously good work people. Many past mistakes being righted here in lovely Broadway by people of vision and pride.

How do you manage to keep all your neighbours onside with the noise and disturbance ? It must be quite a pr exercise !!

Excellent work, great to see this GWR item being used

Whist you were taking delivery of the footbridge items, who made off with the signal box entry door frame? With all the excellent platform building work, has the signal box work stopped for the time being? Amazing progress all round.