Saturday 27th September 2014 Well that was a Productive Day!

I was able to spend the morning at Broadway today  and what a great turnout - there were sixteen volunteers including 2 new starters, Paul and Graham. Welcome! 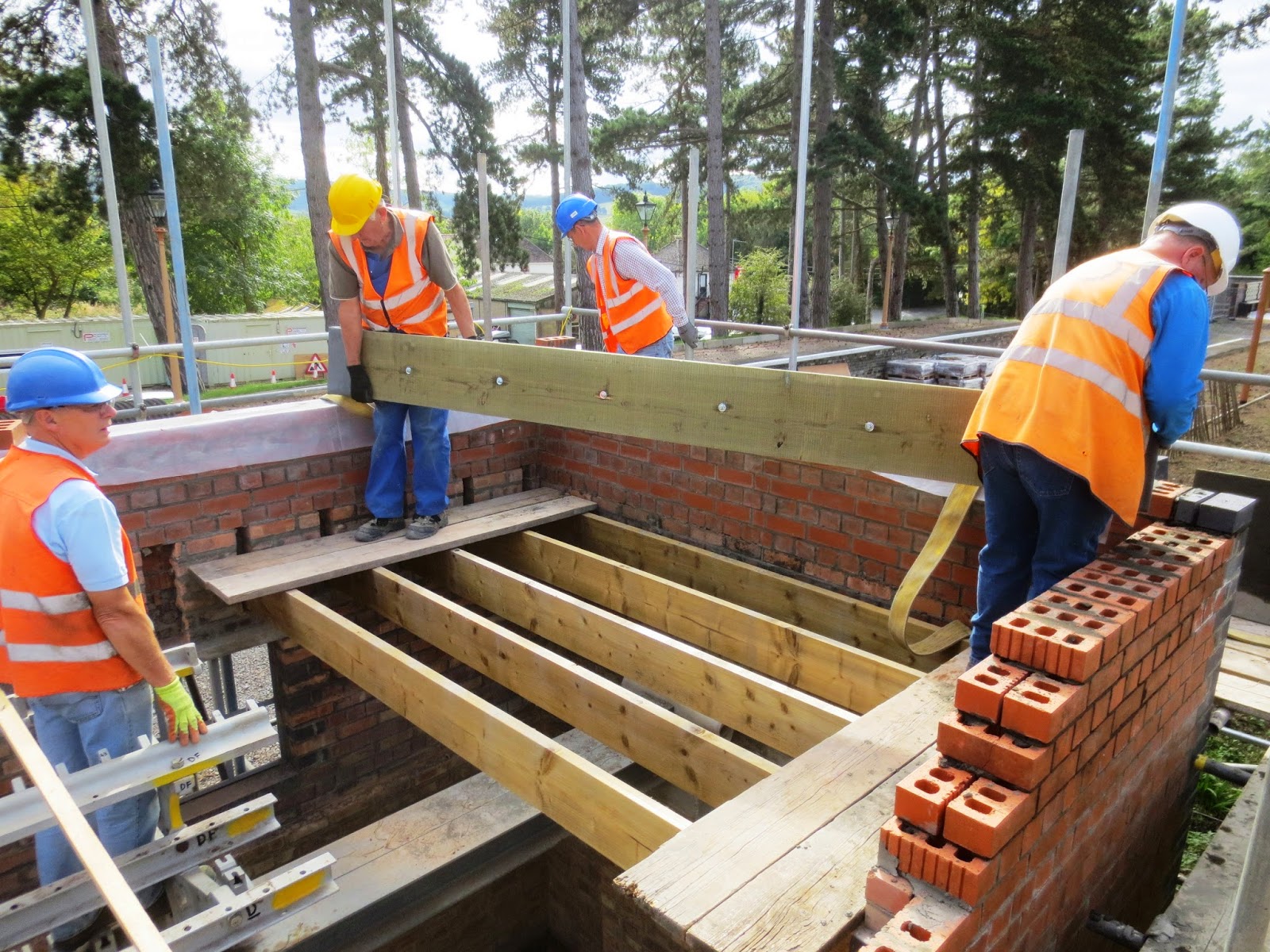 Judging by the volume of Jo's photos on the subject, the Signal Box saw most of the action today. Two activities were on the go - brick laying and installing the floor trimmers.
Here one of the lateral trimmers is finessed into place. 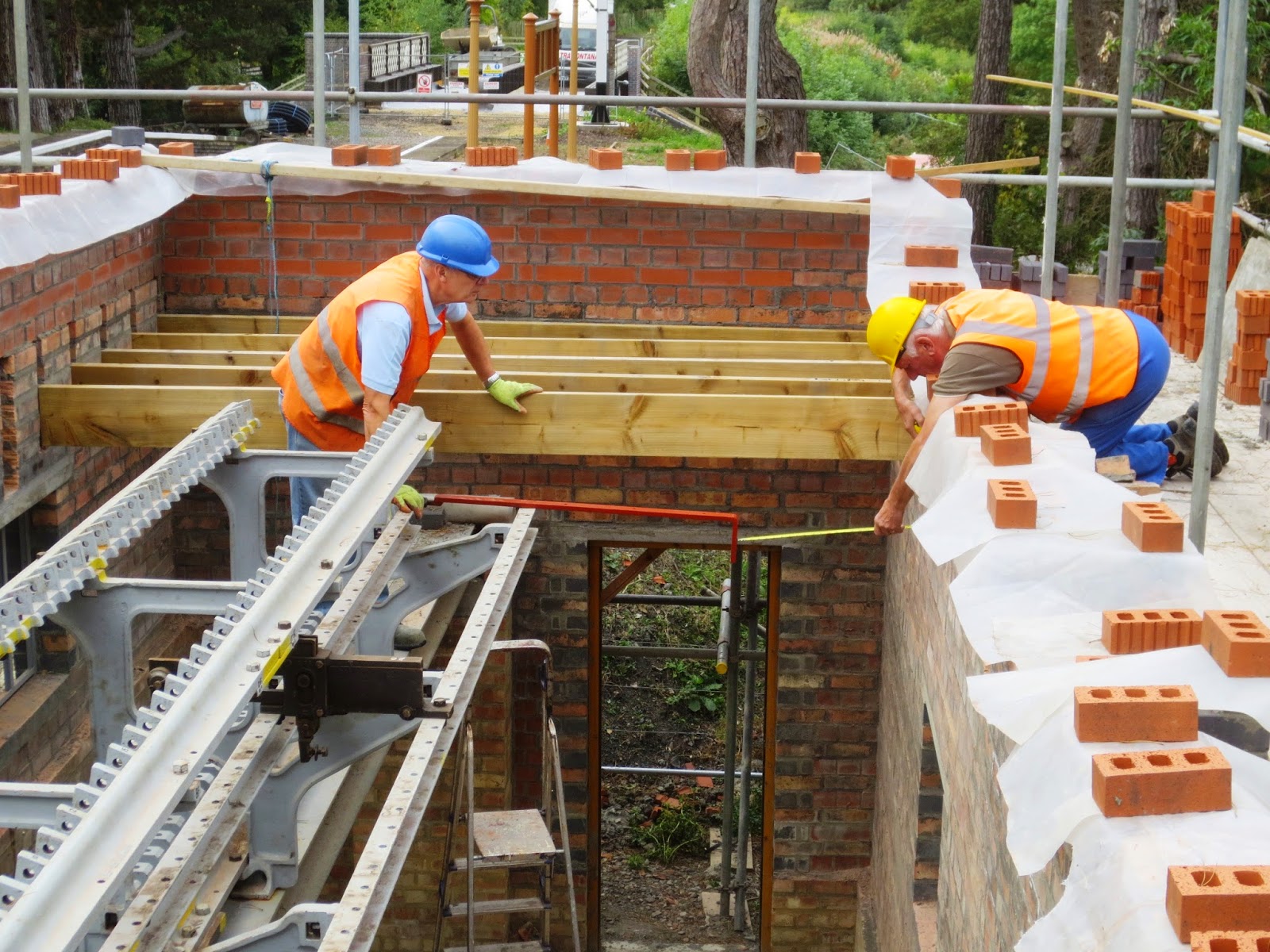 Here John S and Peter Q carefully measure the the distance between the rear of the metal joist and the wall. 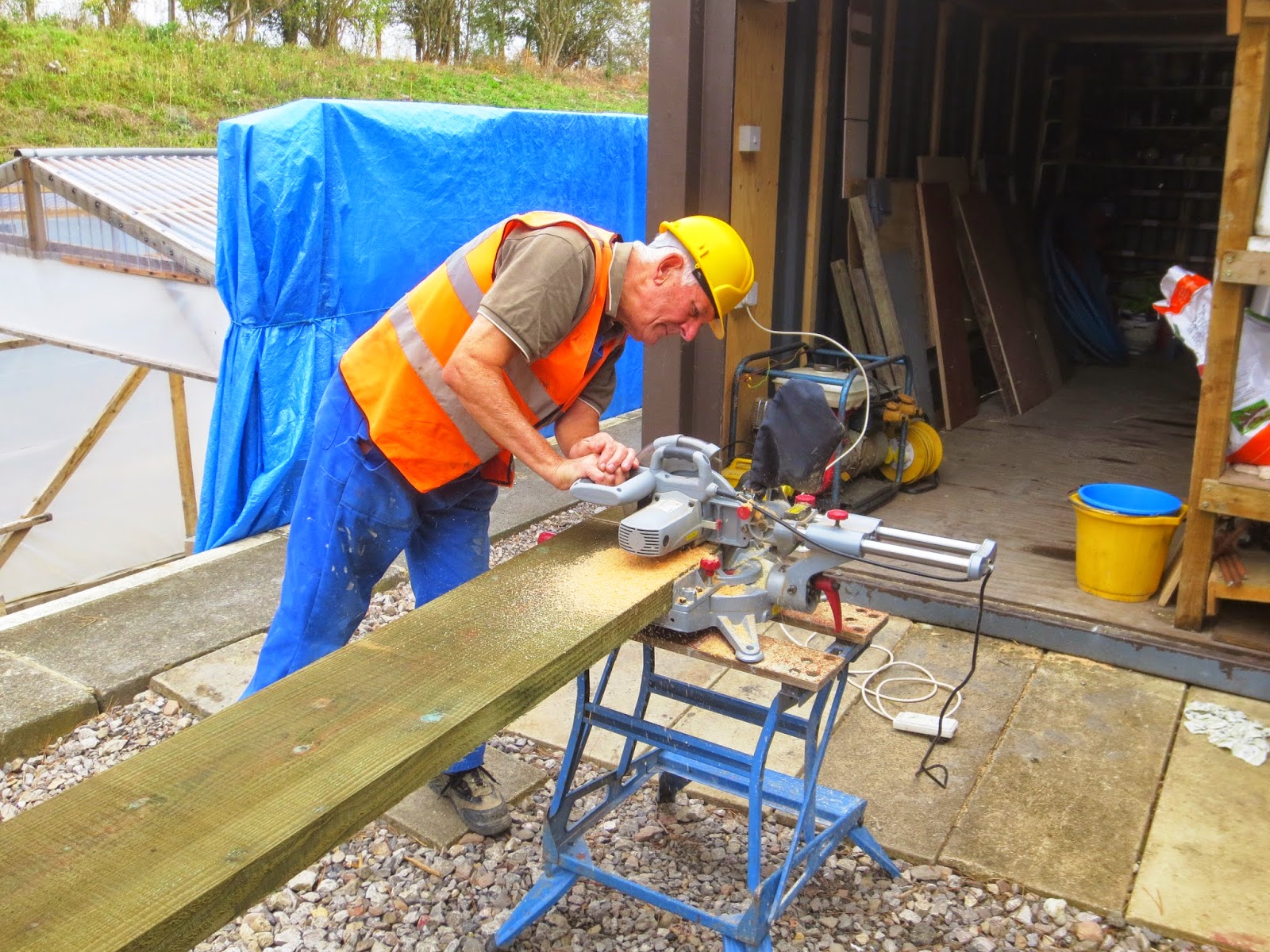 Here Peter is cutting a joist to length  - they then get transported, courtesy of the dumper, down to the Signal Box. 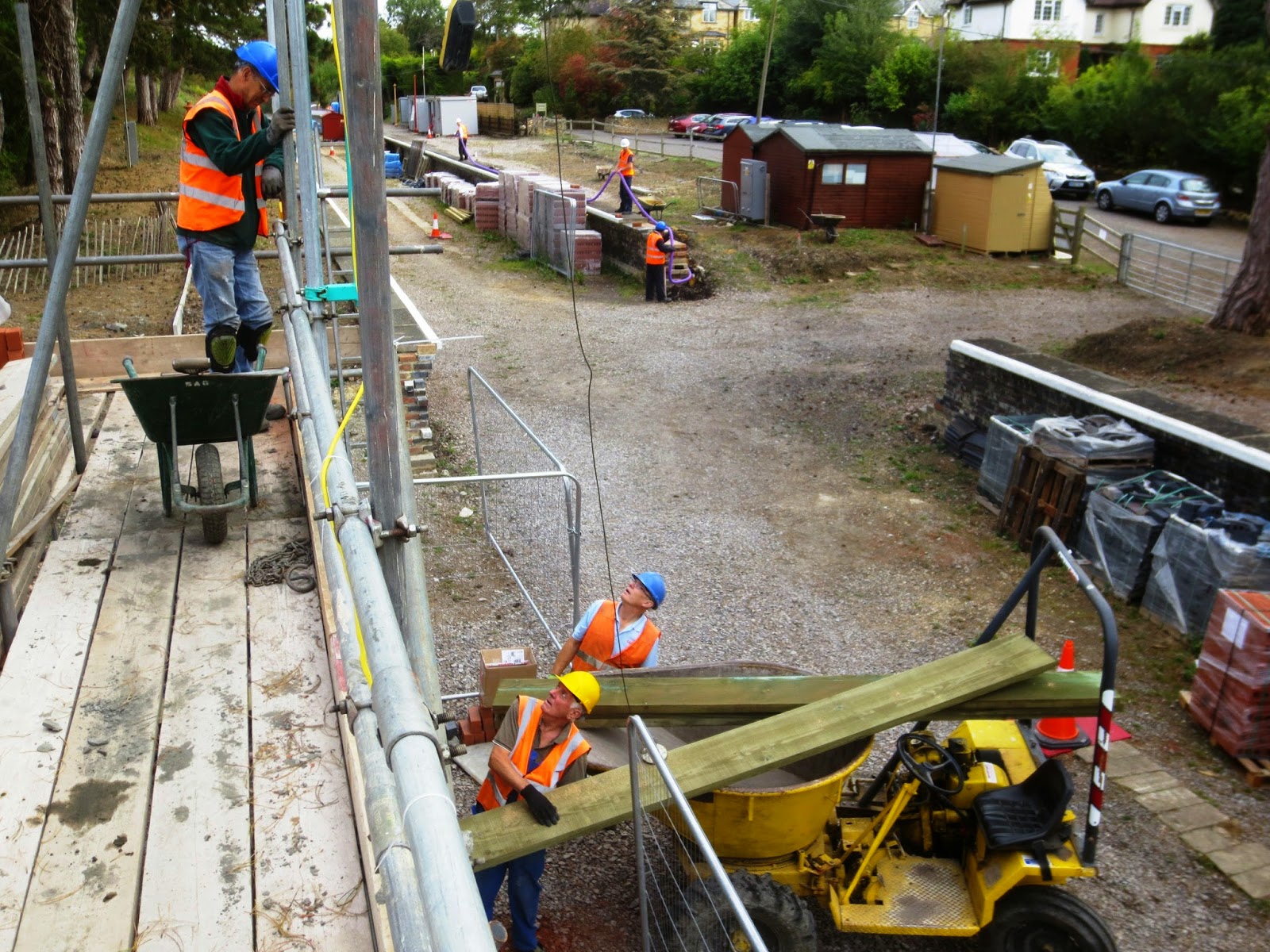 The electric hoist came into its own today, both for lifting barrows of muck, courtesy of Roger J, and of course the joists themselves. 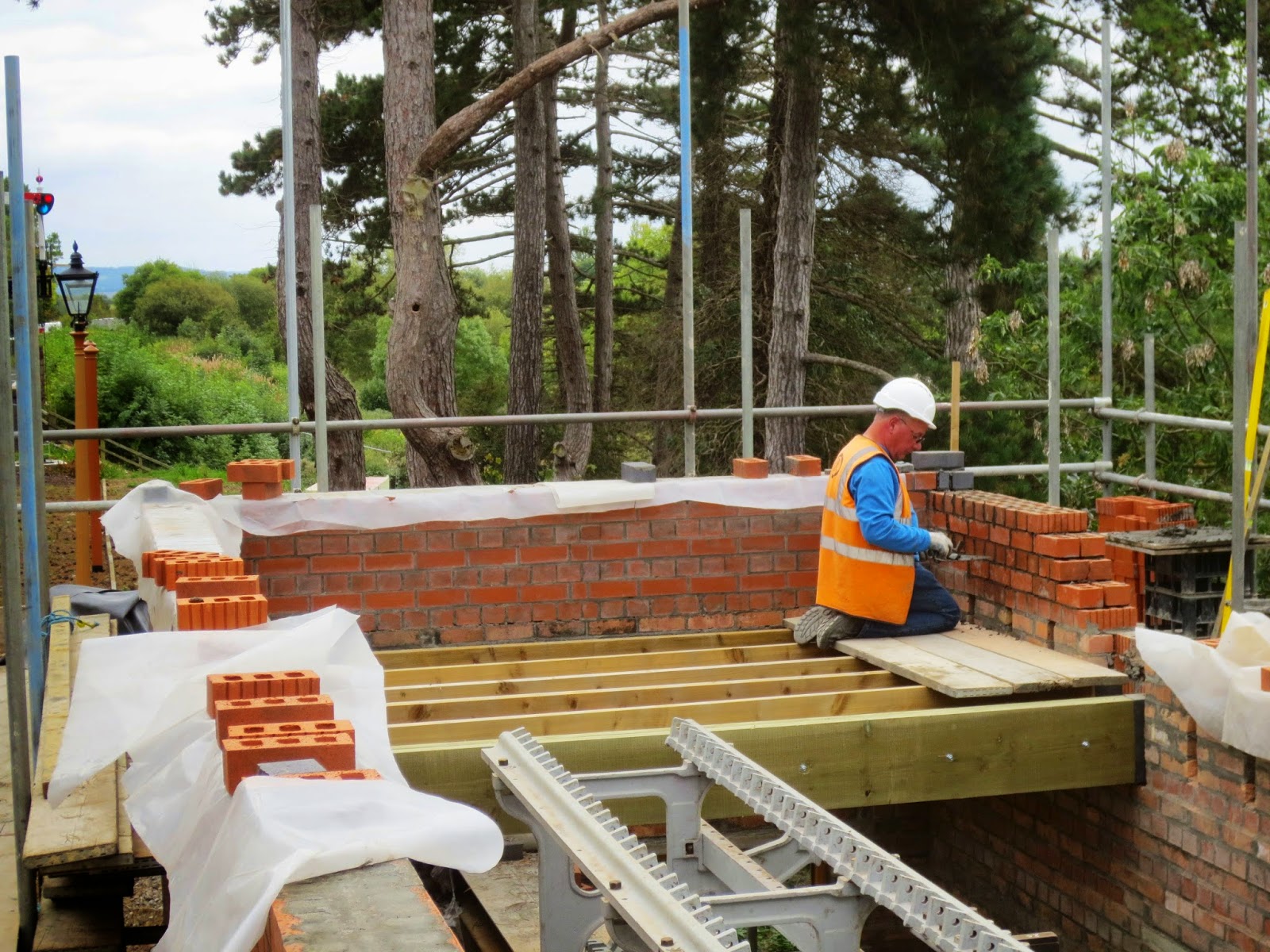 Bob W plugged away all day on the brick laying and made some great progress. He will send me some statistics later.

It was a good day getting the trimmers sorted out and installed which will enable the back wall to continue in earnest.  Today the southern end of the west wall was brought up to cill level for about 25% of its length to match that on the north end.  The south west corner has been set out ready for the window positions.  Over 100 bricks were laid in total. 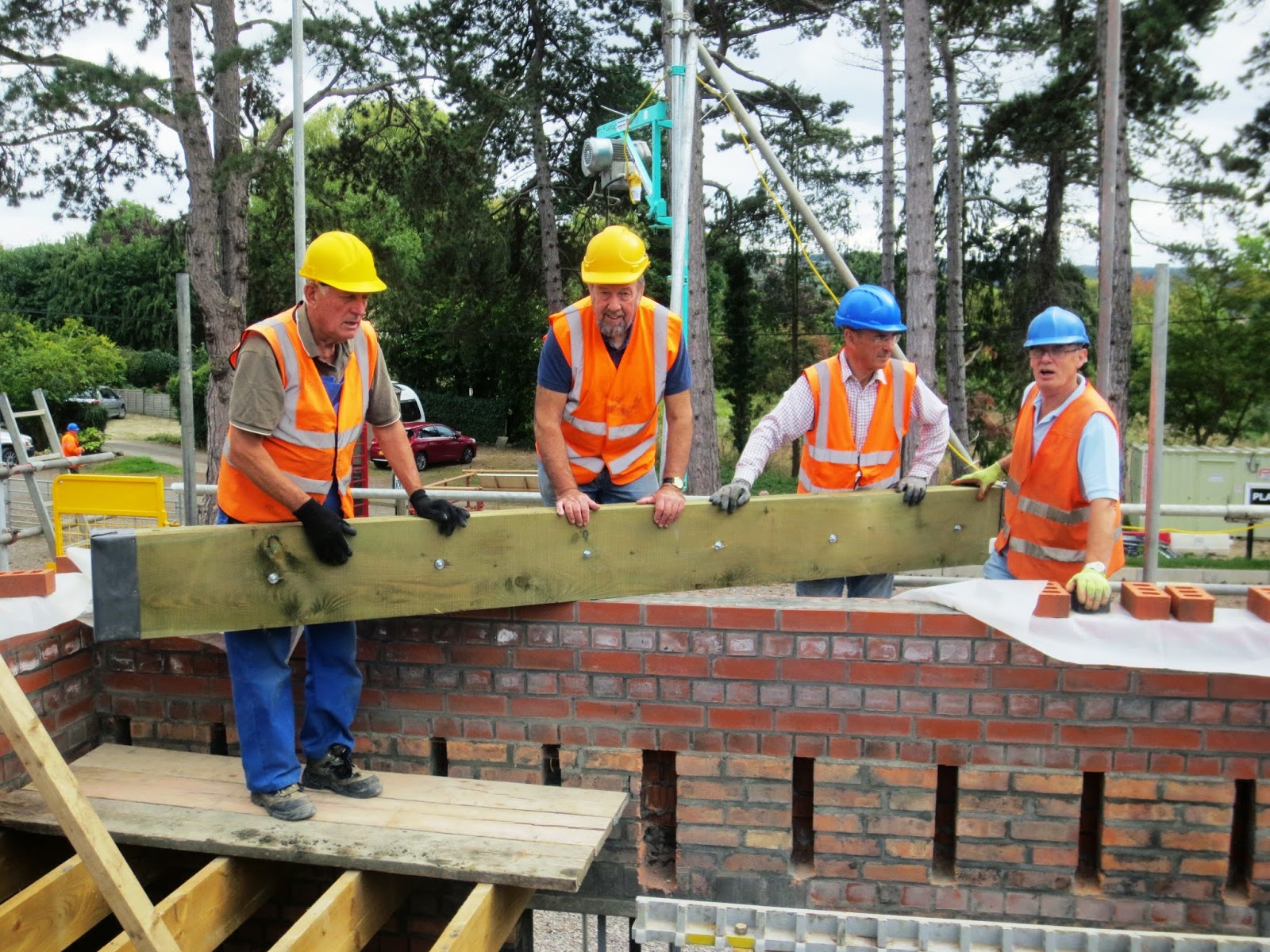 And here just one of Jo's excellent shots. It was a happy band of pilgrims on the Signal Box today. 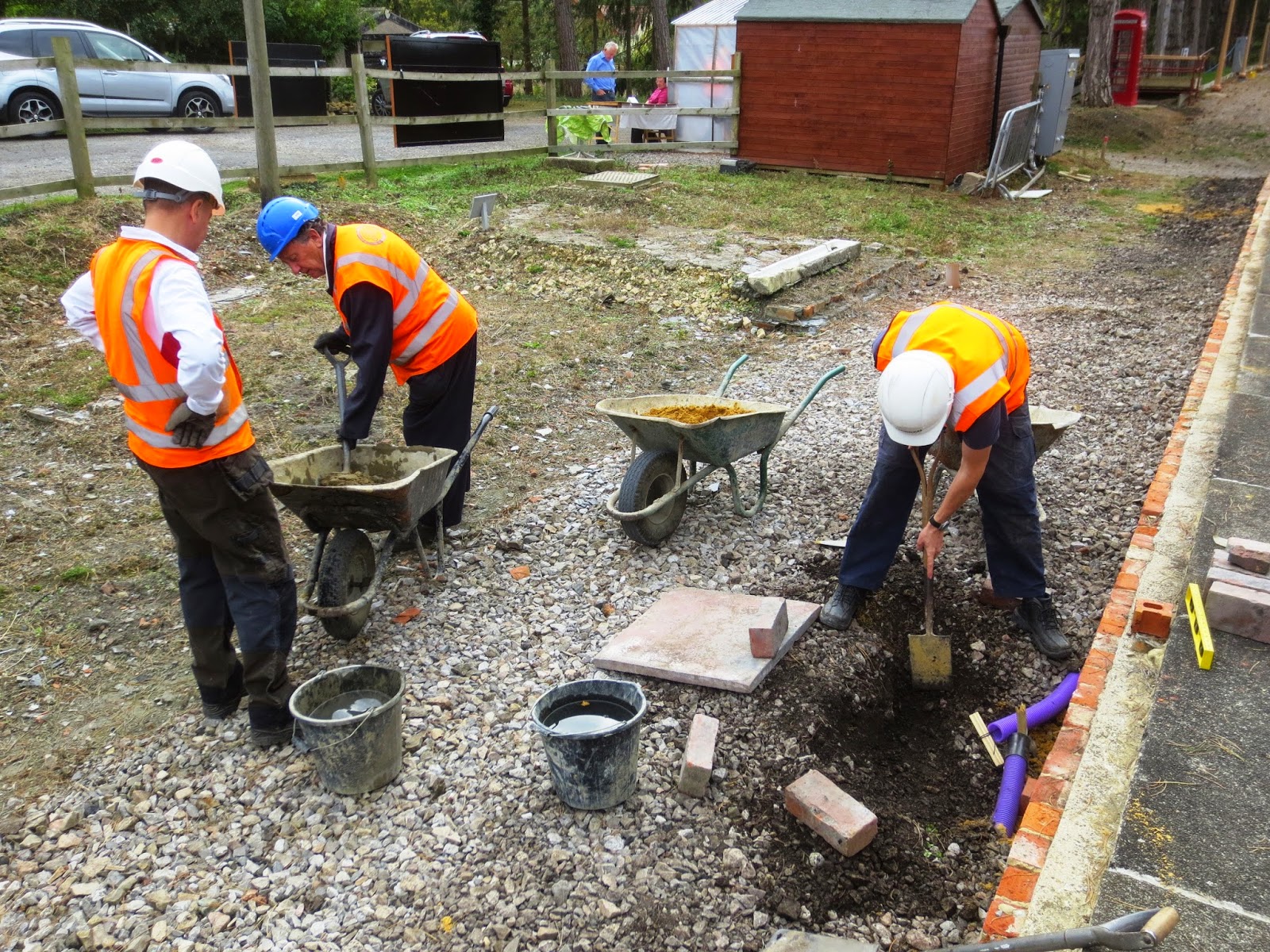 Elsewhere no less sterling progress was being achieved. The next section of the comms ducting was put in, with a good deal less drama than on Wednesday! New recruit Graham likes digging - no shortage of that at Broadway! 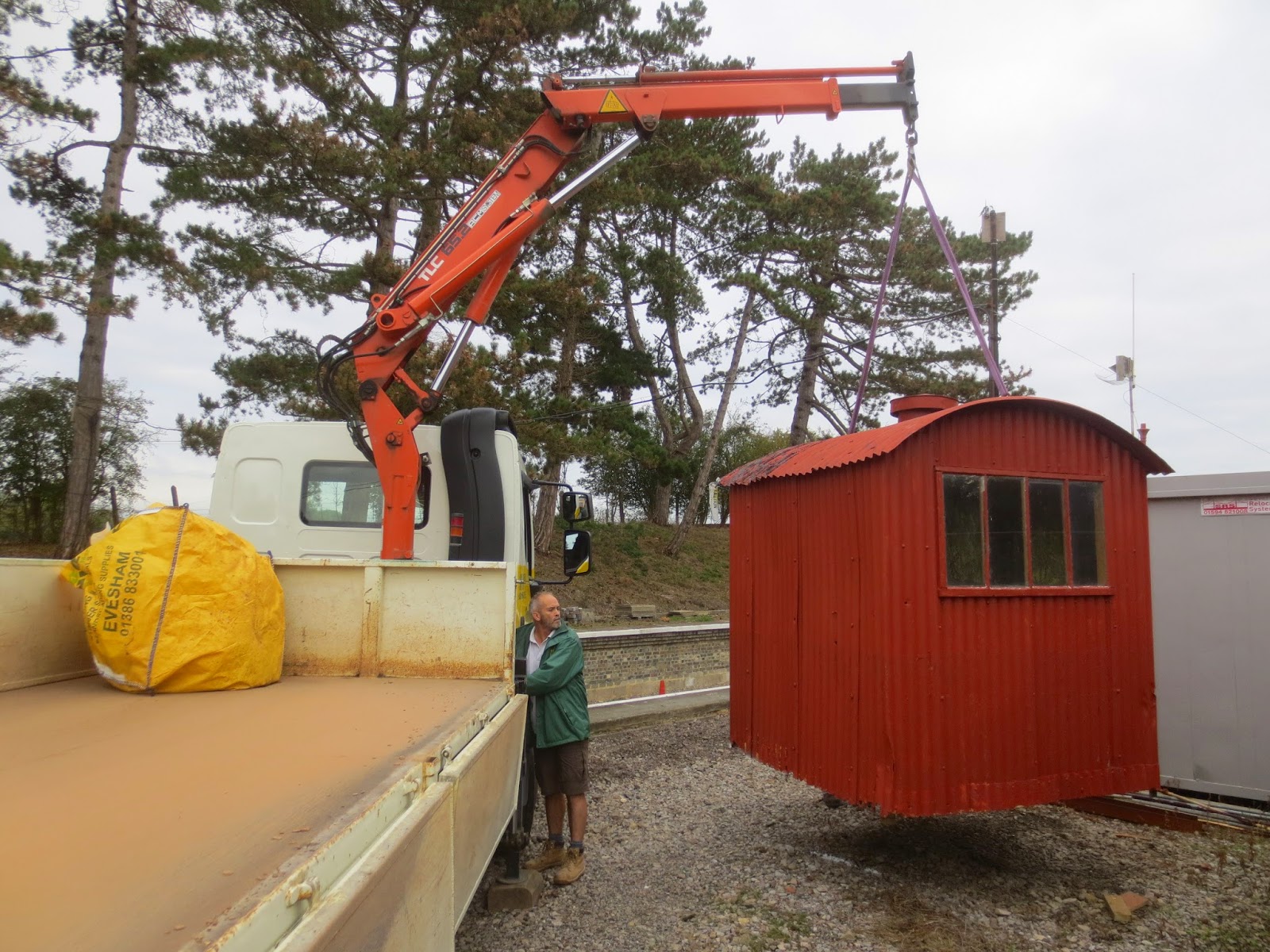 I had promised one of our Midland Region lamp huts to the Loco Department. Today was the day for transporting it to Winchcombe where it will have a good home I'm sure.... 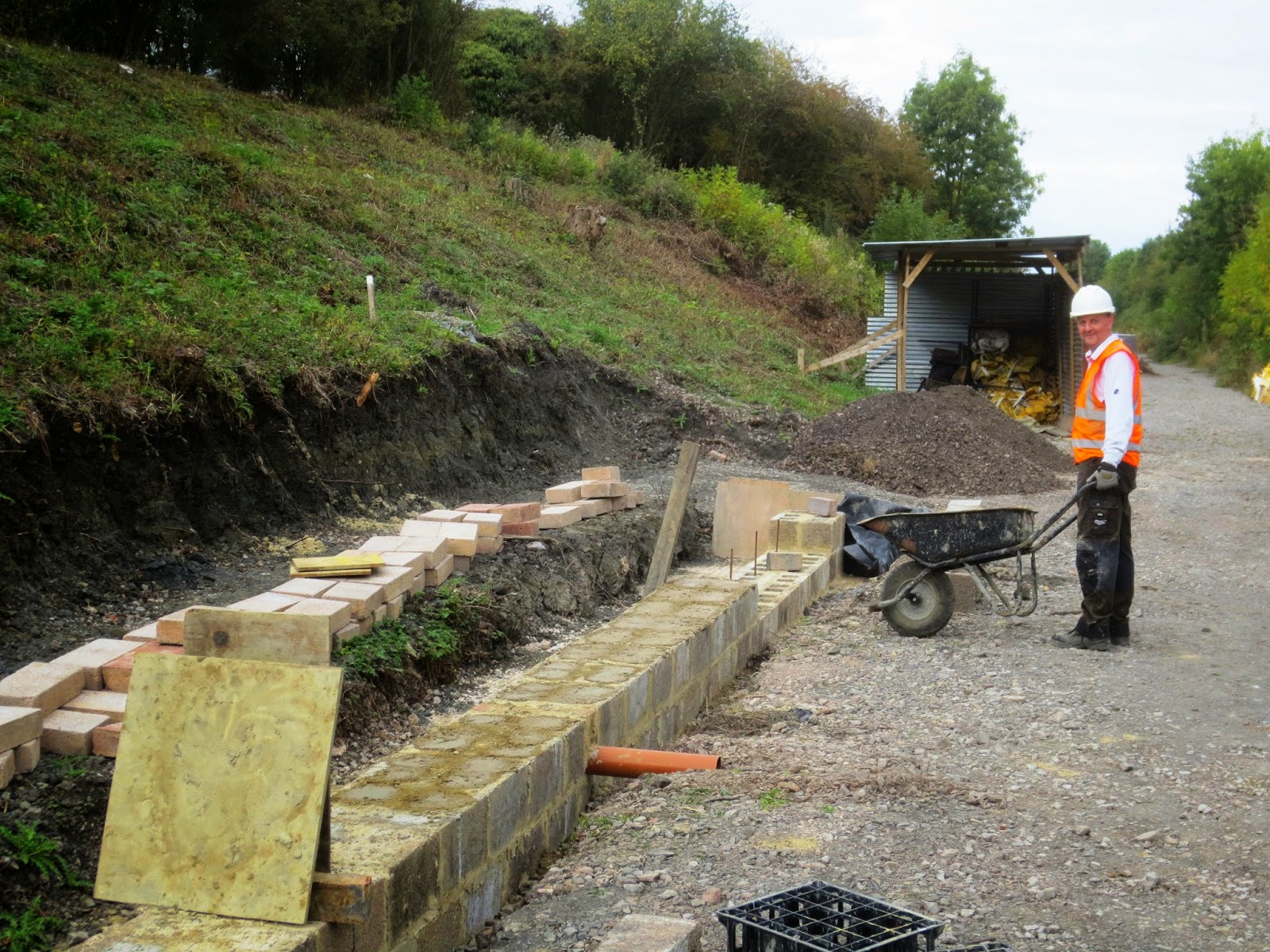 Lastly, up on Platform 2C Brian and co did some concreting in of the blocks ready for Wednesday...

Here Phil Boyer, one of our hard working Saturday Gang  barrows in the concrete, There are plenty of opportunities for new recruits, especially on Saturdays. If you would like to come along and have chat about it, please do.


As I say the day went well, made smoother by Jim H who was Duty Officer for the day.
Posted by Bill at 22:03

Good stuff. When will the roof be on- by Christmas?

Before the winter weather comes....

If you are still after bricks talk to crossrail they have unearthed a turntable pit outside Paddington that will soon be covered...

Will there any provision for Loco watering at Broadway?


Yes but in what form it will come is yet to be agreed.

More questions than comments.
Not being an expert on signal box floors, why is the sixth floor joist from the south end of the box of a significantly deeper section than the other five? Is the local floor loading higher at that point? What are the six bolts along the neutral axis of the deeper joist for? PS Congratulations on the brilliant progress being made.

The two joists nearest to the ends of the frame will support trimmers running parallel with the frame, and hence carry extra weight. They are doubled up; the bolts you can see hold them together for strength.

Thanks for reply. Much appreciated.

Looking at the WDC planning website, I reckon you've got a little under 3000 bricks to lay. Recent progress is about 100 bricks a week. Allowing for bad weather etc, I can't see you reaching roof level before next spring. Are the bricklayers doing their own labouring (i.e. mixing mortar and shifting bricks)? Are more shifts per week possible?