Despite a couple of storms blowing through, which tried to give us a soaking, 16 volunteers pressed on with jobs in hand, and spirits were high. 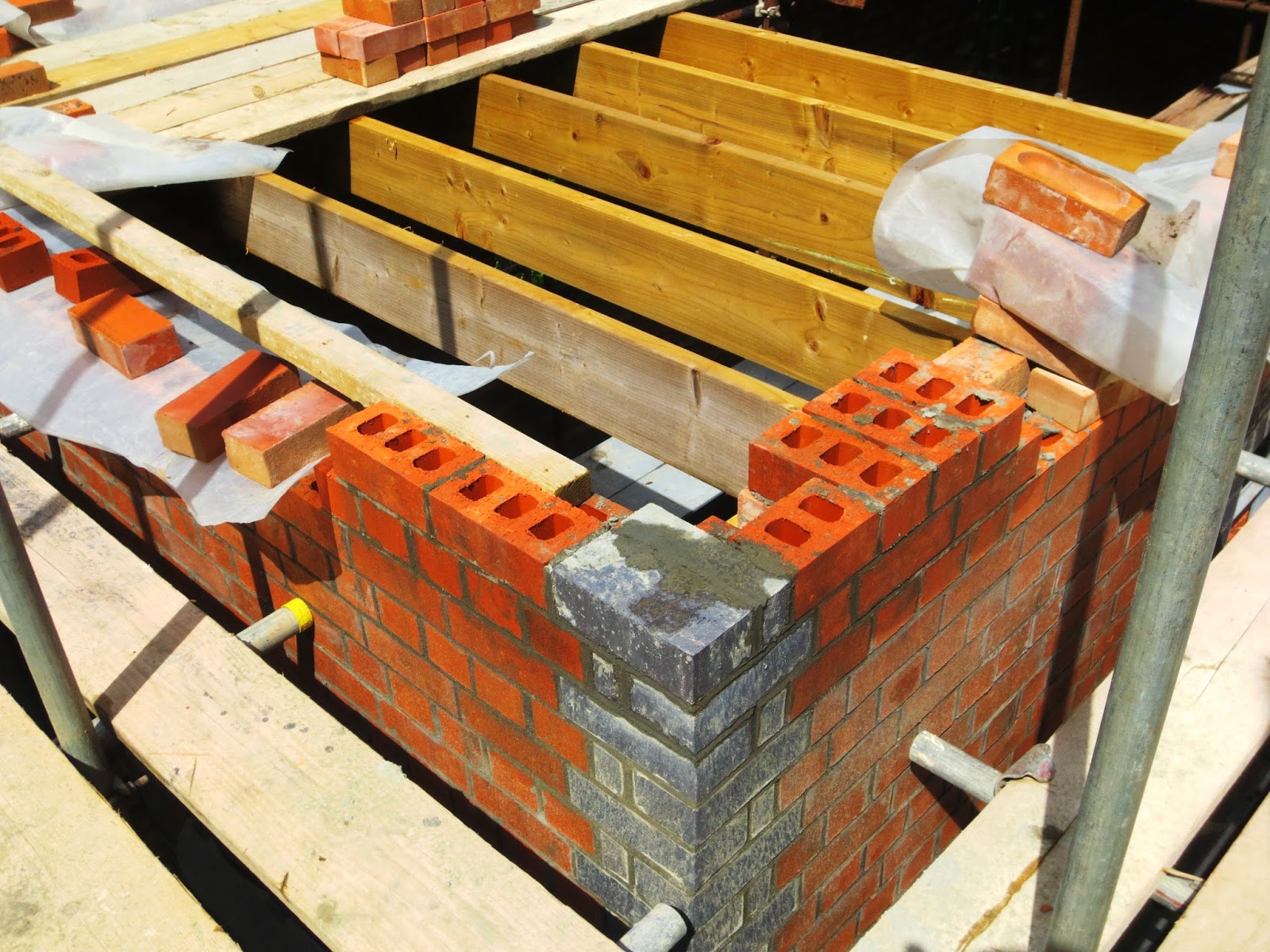 The weather was unhelpful for brick laying, but Bob W managed to get a corner started  on the south-west side of the signal box. 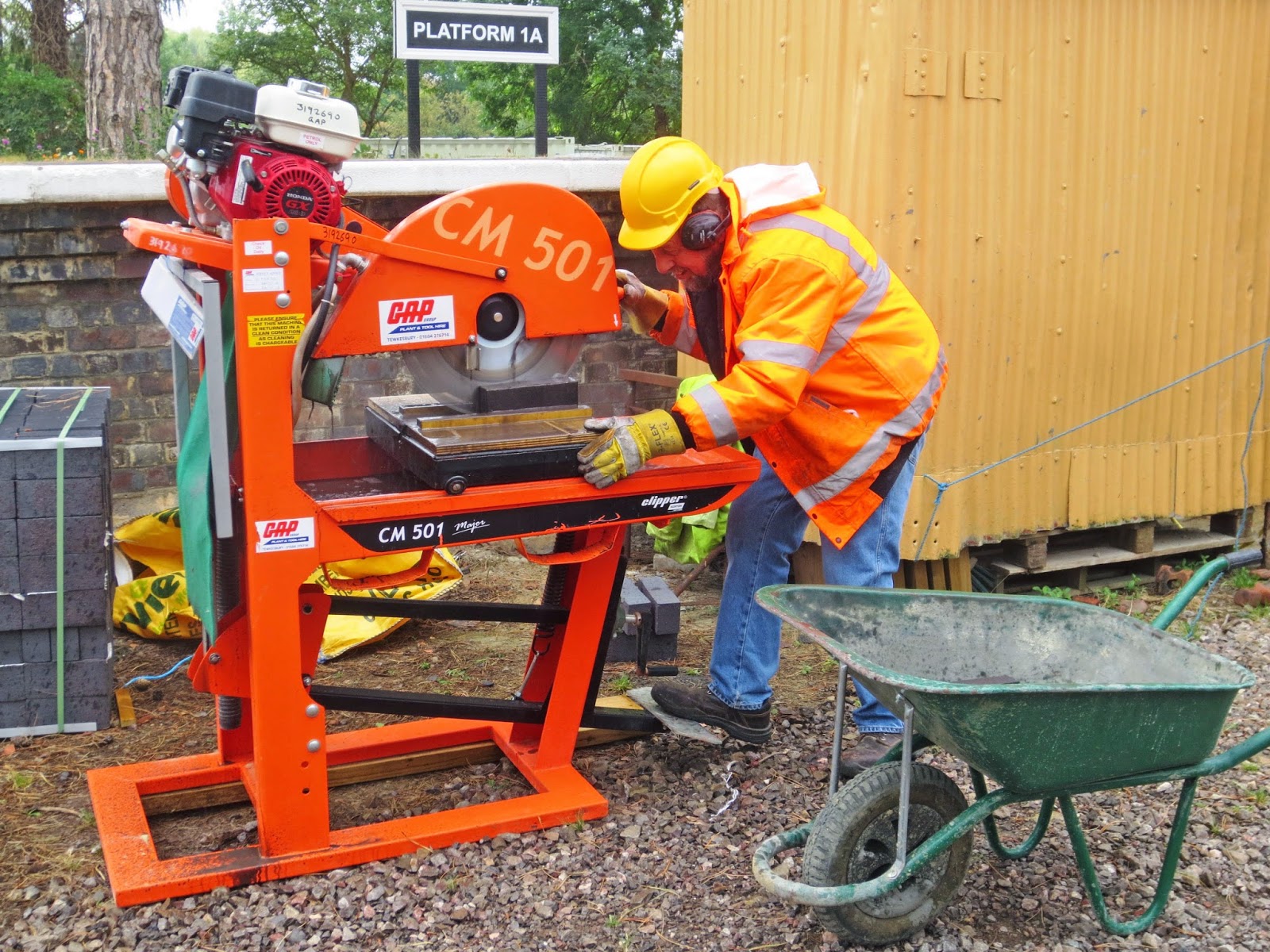 As indicated before the blue corners require queen closers(closures) cut bricks to make up the correct bond. The  only way to  cut the volume of bricks required is to use the masonry bench saw. Peter K wasn't quick enough to step back when a volunteer was asked for and he got the job with Keith S! 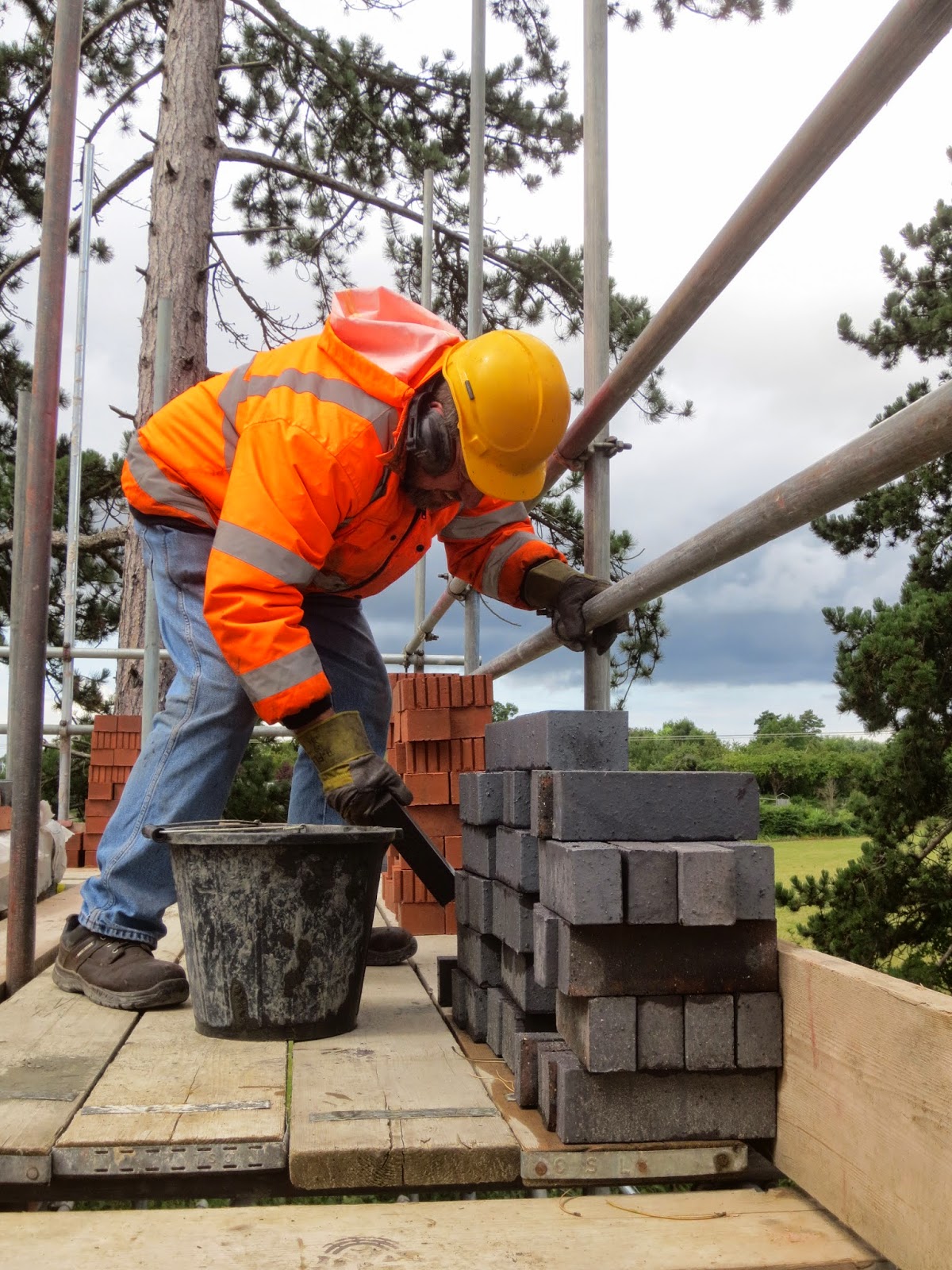 However operating as a team with Keith, 119 cut bricks were produced and bucketed up  to the first floor of the box. A great job, which resulted in tired arms, and a soaking from the water jet on the saw.
We got a replacement cable for the hoist but it was  too late - the job was done! 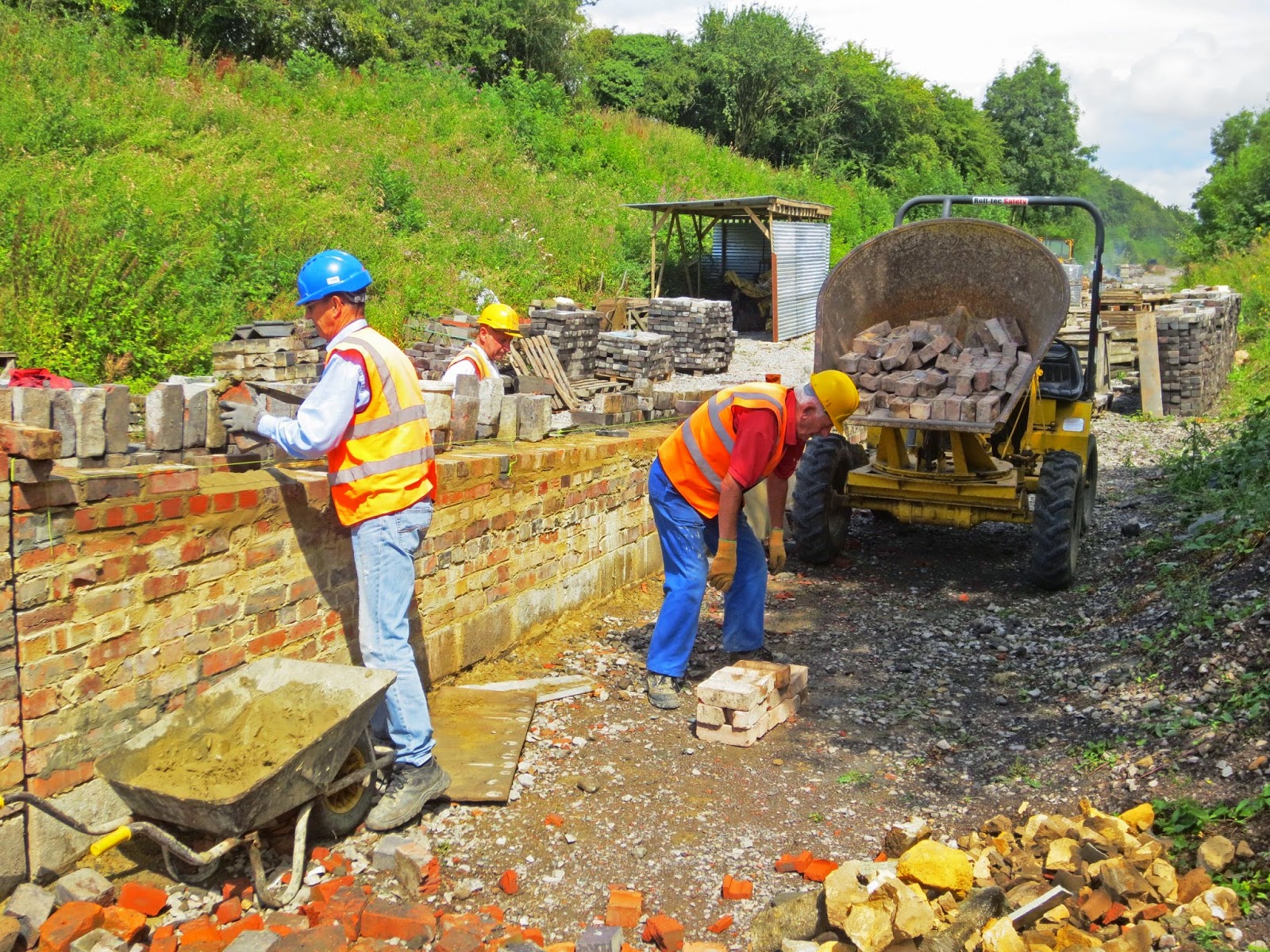 On Platform 1C the final level of corbelling was being laid. Clive, Roger J and Peter Q were in action. The weather  inevitably slowed this job down, otherwise it might have been nearing completion. 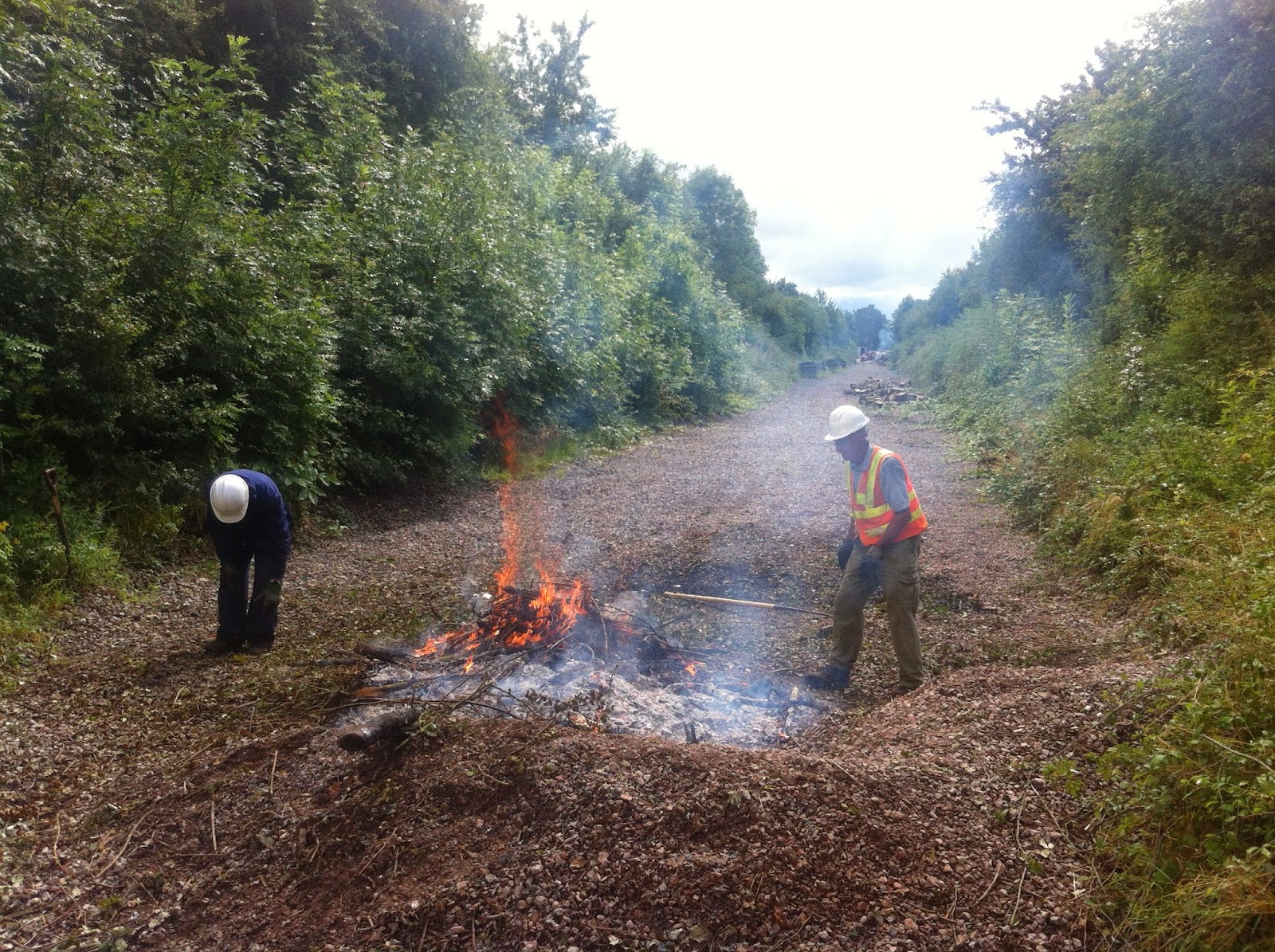 Other things on the go?

Well, a terrific clearance job was done on Wednesday on the northern boundary and it remained for all the debris to be burned. The fire starters among us had two fires on the go, which burned steadily for most of the day. Dave H, Ron  T and Bill V kept the home fires burning!

The results of the clearance are shown here, east and west. 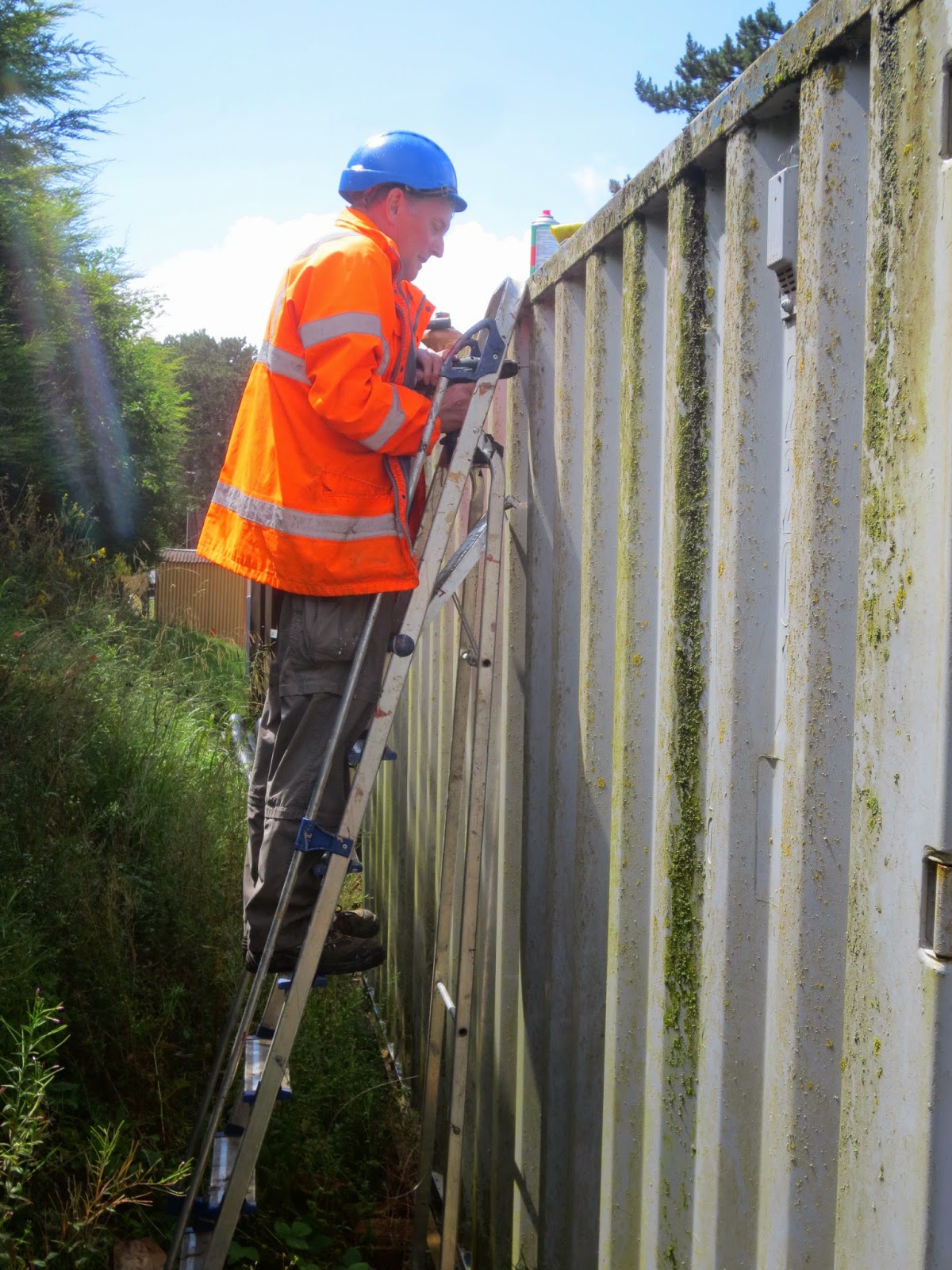 Jim H purchased 4 vents for the storage container - it gets a bit fumy in the hot weather. It was mission accomplished before the end of the day. Jim and Peter spent time going through the inventory of wood required for the footbridge - its not an inconsiderable list - all we need is a timber merchant with a deal we can't refuse!


And a couple of end of day pictures:

The storm on the horizon - it was a wet one! 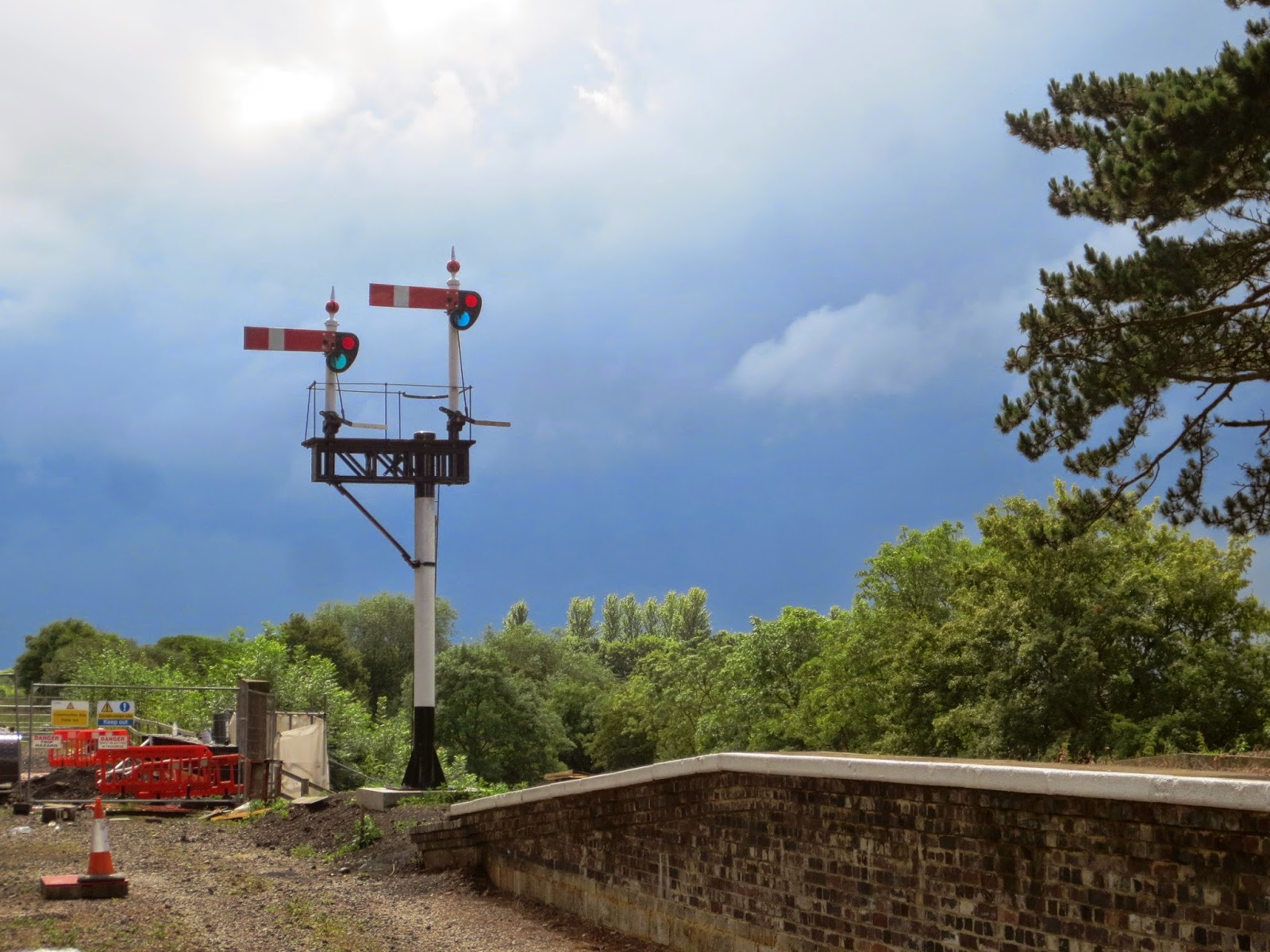 And Jo looking as though hes practicing his levitation skills...... 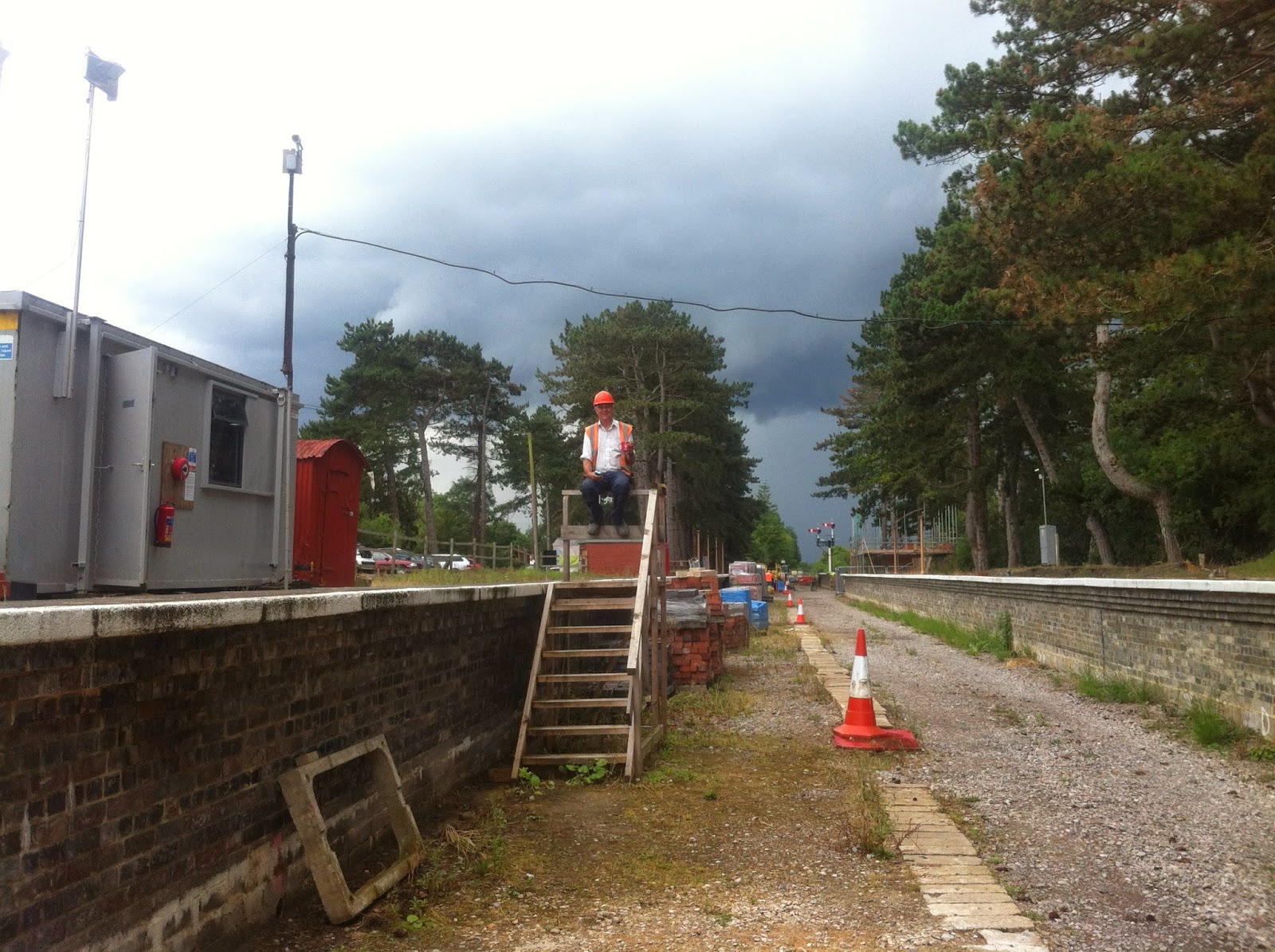 Love the progess you guys show on almost a daily basis. One question. The bracket signal you have erected, Is it the starter signal for the platform or the home signal as both arms are 5ft arms?

It's amazing to watch the steady progress being made, and I salute everyone involved. Well done!

I'm curious about the brickwork in the first picture... It seems that the pattern of the bricks has changed for the start of the three highest rows to the right of the corner blues. Is there a reason behind that?

Is there a proposed track diagram available on line?

Slightly off track I have been reading the BBC west Midlands news site. It may well be that the Broadway footbridge may be in use before its replacement. It looks like firstly they couldn't find the right paint!!!!!!!!!!! Now they are having trouble installing the cctv cameras which London Midland say they need as the Station is unmanned.