I was pleased to be back  at work with my volunteering chums - 2 weeks away and I was getting withdrawal symptoms!  There were 12 of us on site today.Thanks to Jo for more than ably standing in on the blog posts - I shall have to watch my step! 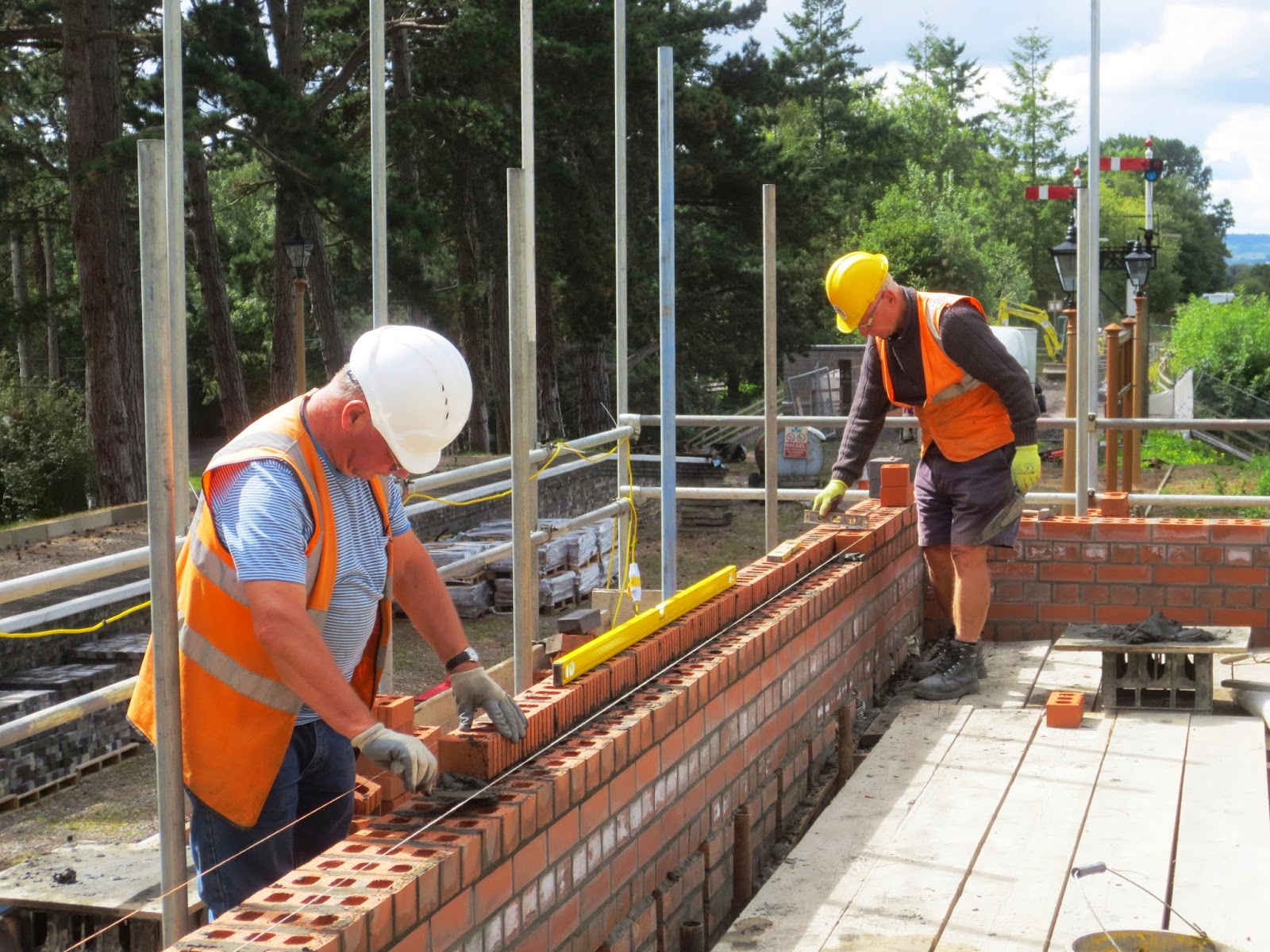 Great progress was made today on the Signal Box. Bob W, Tony and John S kept the show on the road by completing the last course of bricks on the front wall and the southern wall to reach the  window sill level.

Talking of windows the decision was made this week for the frames to made from  hardwood. Lets have no more talk of UPVC, or conversely the high cost of maintenance involved with wooden frames. They are going to be wood and they are going to look magnificent! 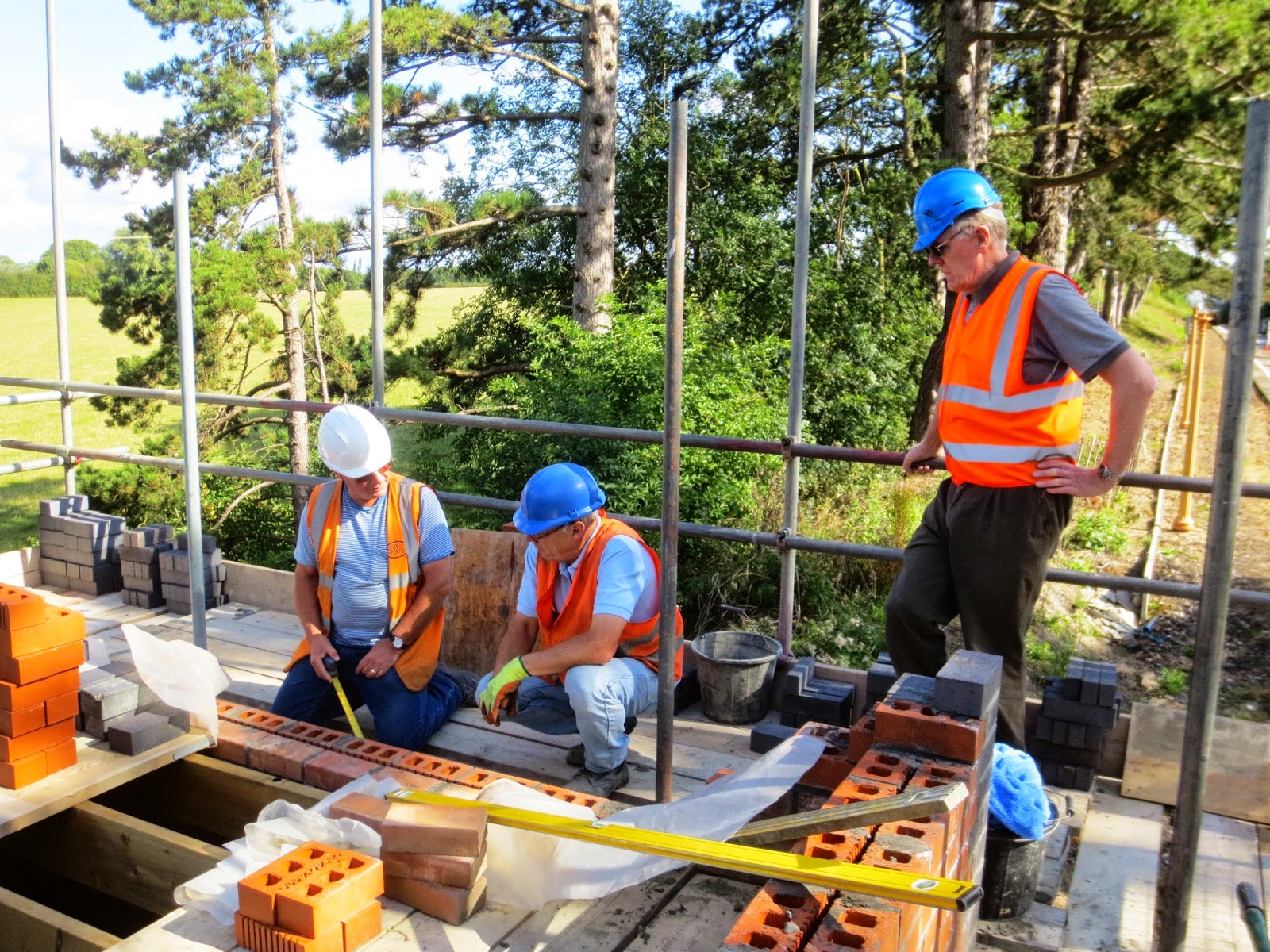 Prior to Bob and Co setting to on the brick laying, discussions took place on the  detail of positioning the  main door frame and fire place.

Here I listen in to the conversation on the position of the door. The door frame is being delivered this week. More of this on Wednesday.

Talking of this coming week the base of the lever frame is coming over from Winchcombe on Tuesday, with an S&T Gang to install it. 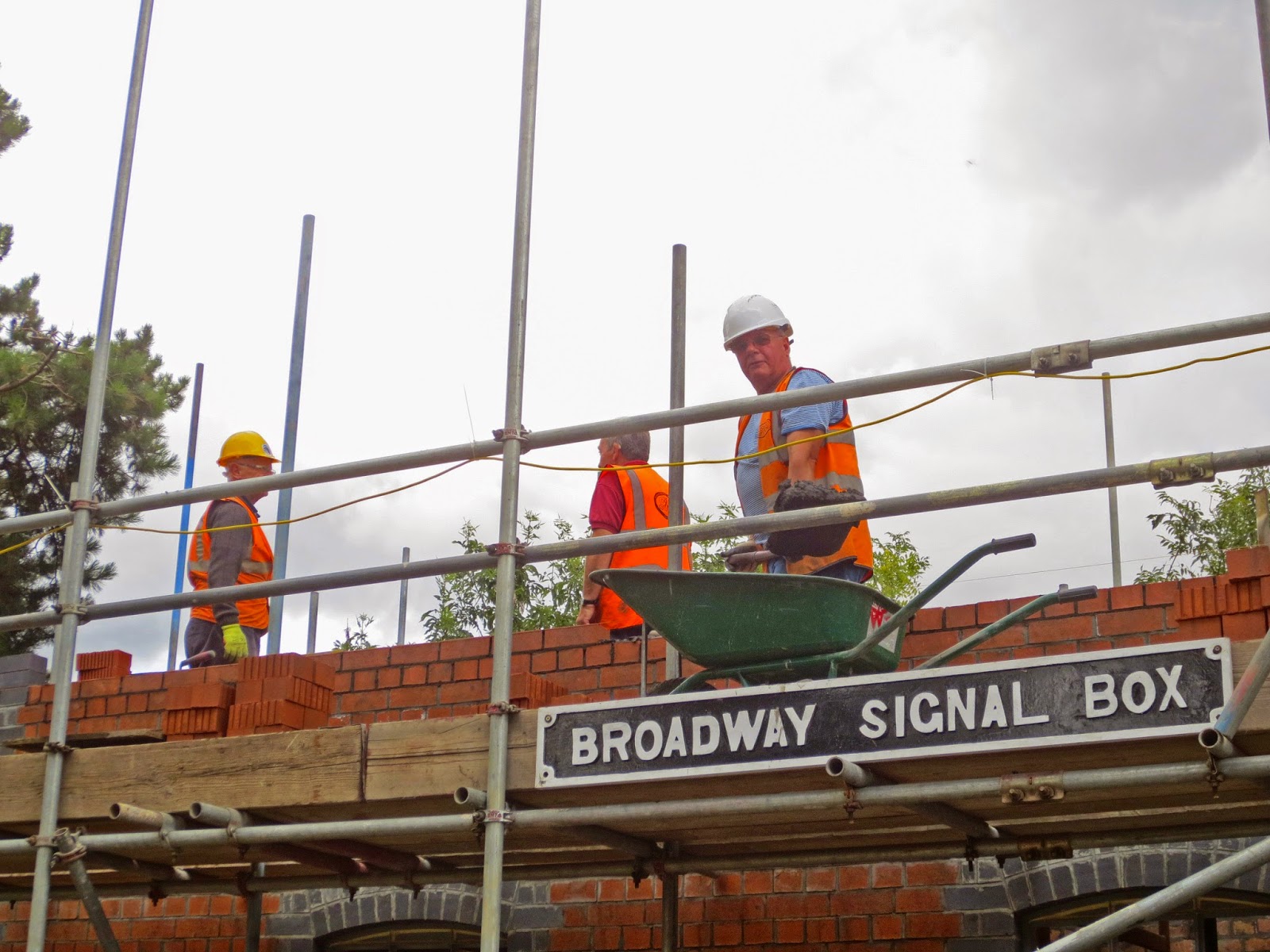 The floor joists can then be constructed around it. This should be started on Wednesday also.  Its going to be a busy week on the Signal Box! 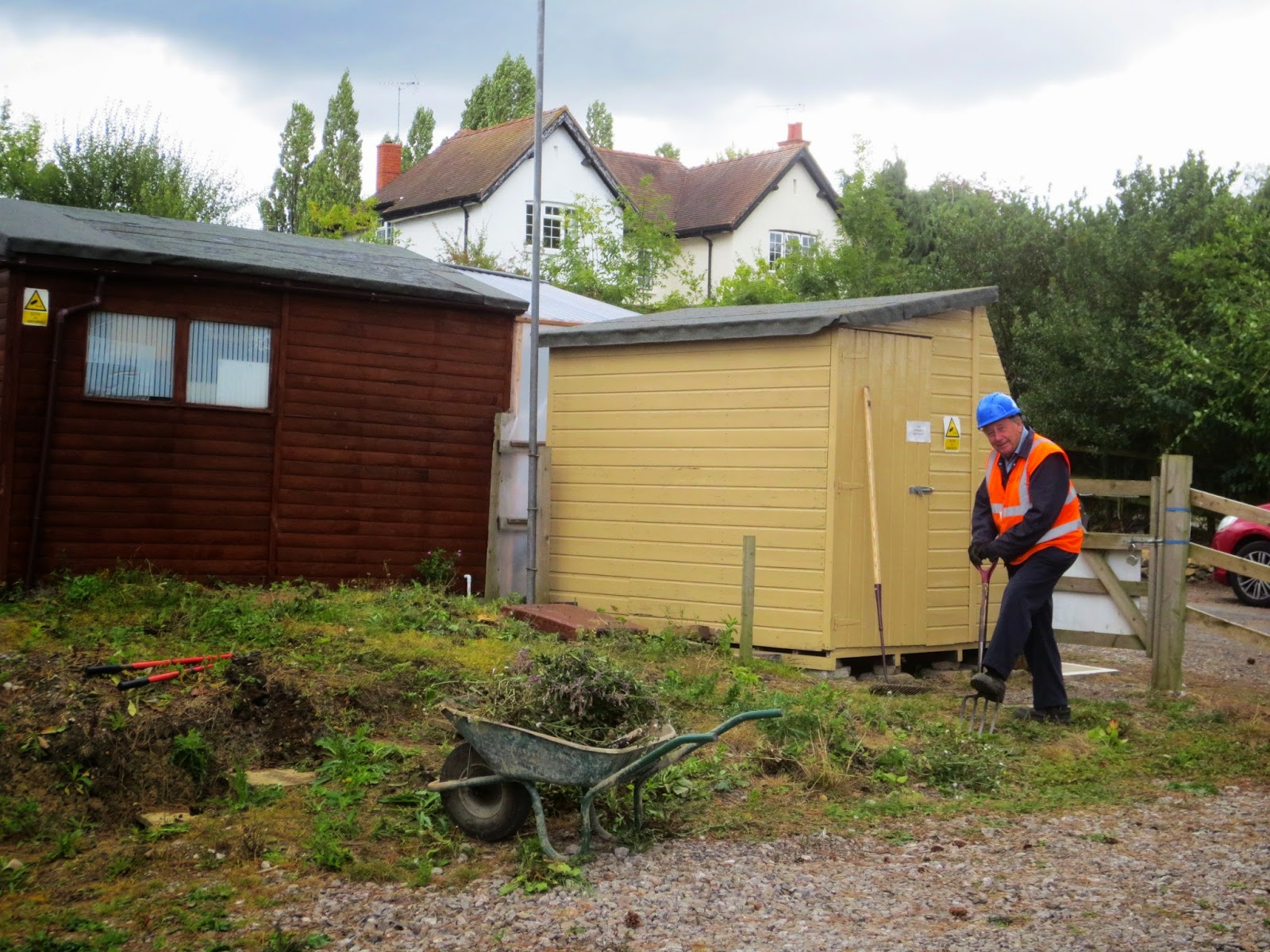 The other main activity of the day was continuing with the clearance of the embankments.  A team of 6 were hacking back the summer's growth of weeds. Maybe not  the most salubrious of tasks but it looks so much more cared for when its done, and of course it's an excuse to light a bonfire! 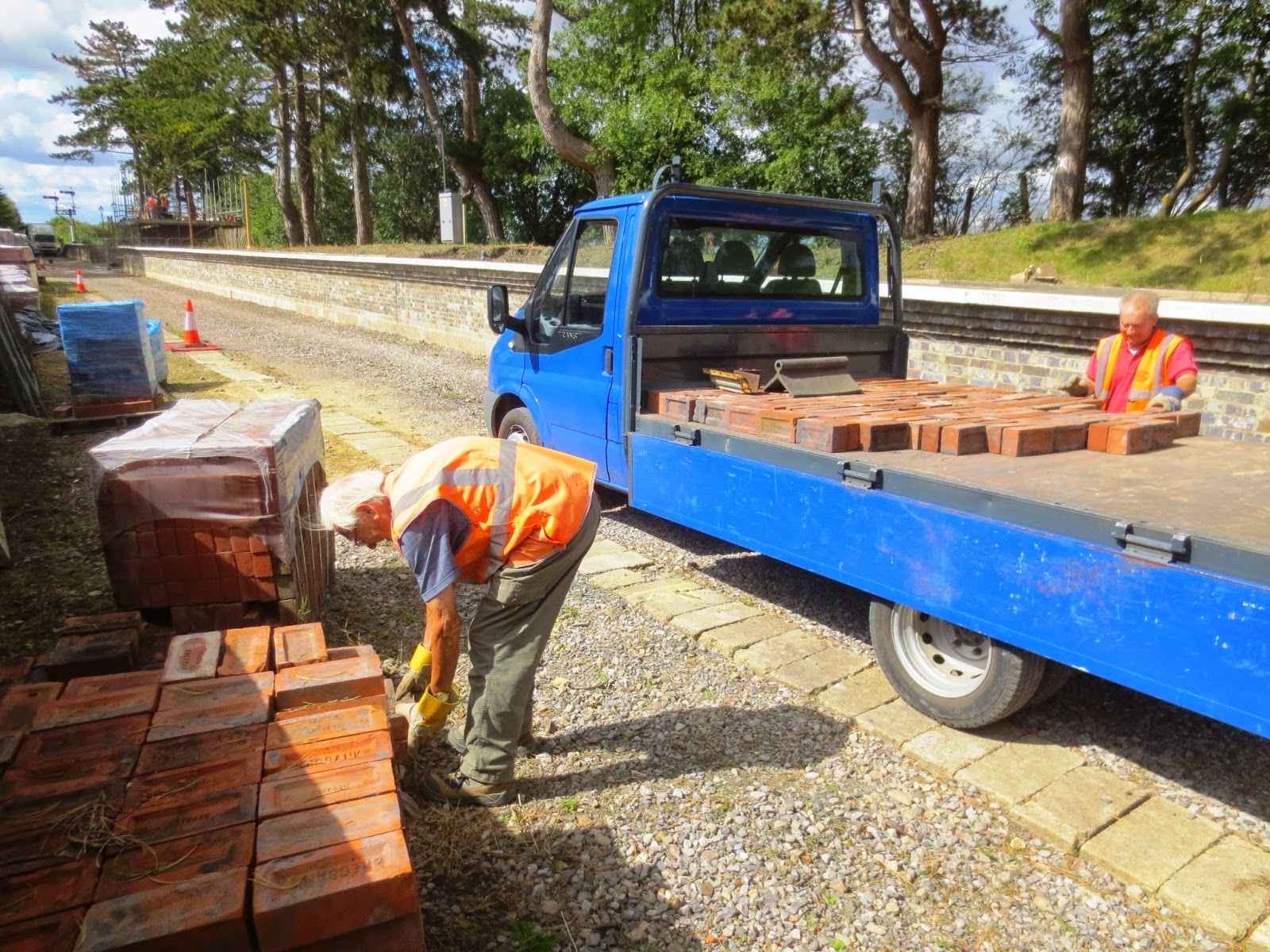 We had a visit from Pat and Pete (just like old times!) who were on the scrounge for some imperial reds for a job at Toddington. We were able to oblige and they went away happy. Jo was behind the camera but shared the loading of the truck. I suspect they will be back for more! 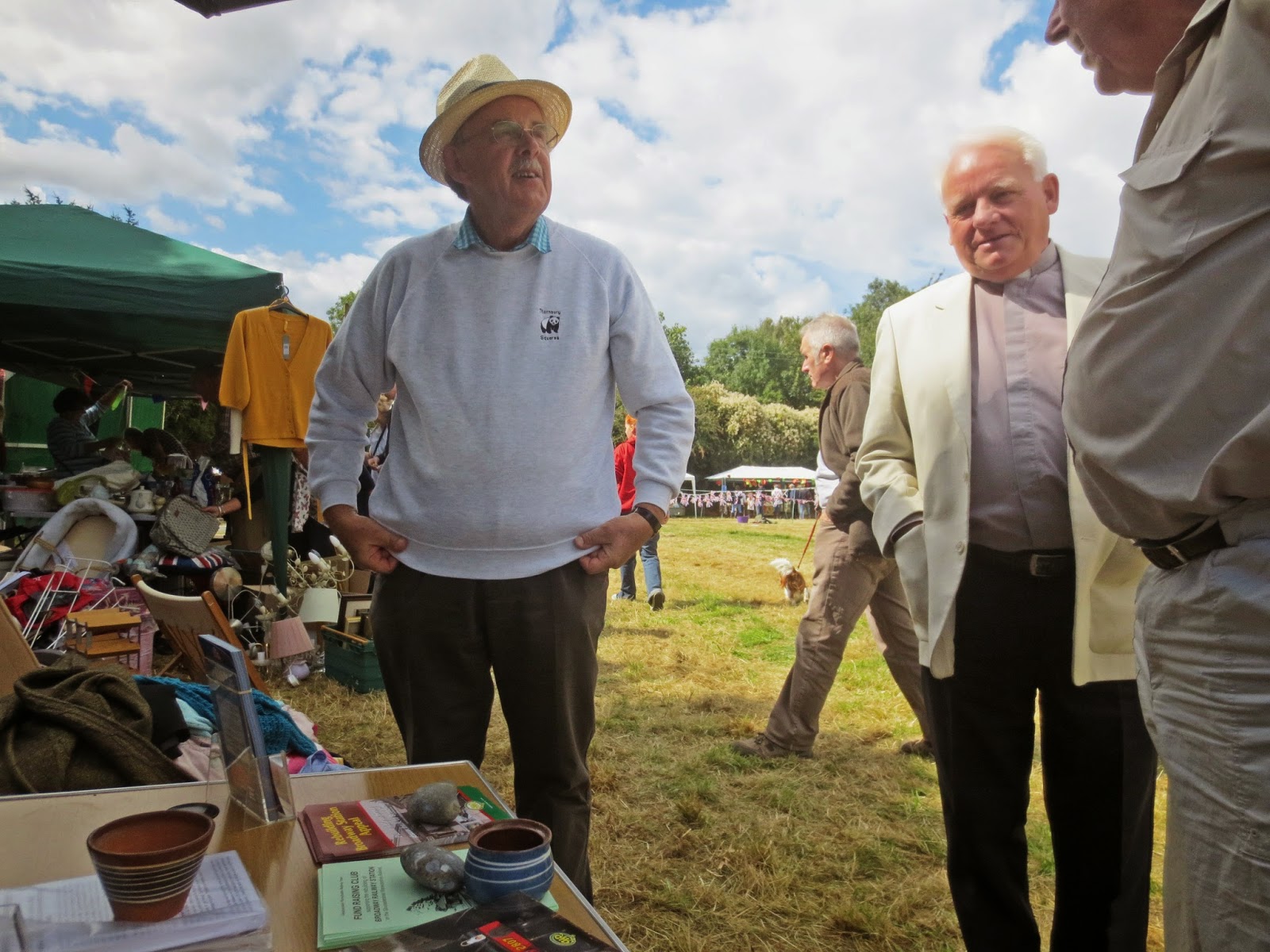 In the afternoon, Jo and Mike S were manning a BAG Stall at the Childswickham annual fair.


As you know, I represented the BAG at the Childswickham village fair this afternoon, and one picture shows Mike by our stand with the vicar.
There were few questions about the bridges, but I did make a couple of potential volunteers, two probable share sales and donations of £31. And a chap gave me some reminiscences of the station, which are always rare and interesting.

Gentlemen, the Signal Box is coming along nicely!! Excellent!! Aaron.

And hard wood windows too. Perfect! This will set the standard for GWR new build boxes, HRA take note.

Hi all glad the frames will be in hard wood, yes and they will cost ,
On that note I'll send you a small donation towards them.

I agree with everything that has been said. Hard wood window frames are a must. I hope to come and visit you on Saturday + a small donation.
JTW

Hardwood is fine, just include some sort of treatment in the maintenance schedule. I've got hardwood frames at home in my 1937 house, don't let the wet get in!

Encapsulate the wood frames in epoxy resin before painting & glazing. By preventing any water penetration, the frames could last 200-300 years.

It's not rocket science. Use technology & save money.