One of the quieter days today - the brick laying on platform 1c is complete and our resident brick layers have their trowels itching to get started on 2c opposite. However, this needs setting out first, and to do this, the site has to be clear. We had a gang of 12 today, and most of them set about clearing the last and rather heavy bricks that were still stacked in 2c's path.
The cleared area is now large enough to set out the 2c extension, but ideally one would like to see the two pallets with slates (for sale...) moved up, as well as the last two dumpy bags of plinth headers. No doubt this can be done by the JCB when it comes to dig the foundation trench.
A number of volunteers set off for Toddington to help with the real ale festival, and the remaining gang then cleared the bank behind the 2c extension of brushwood. You can see it's pretty thick in the picture above - it was only cleared last year. Brambles grow fast. 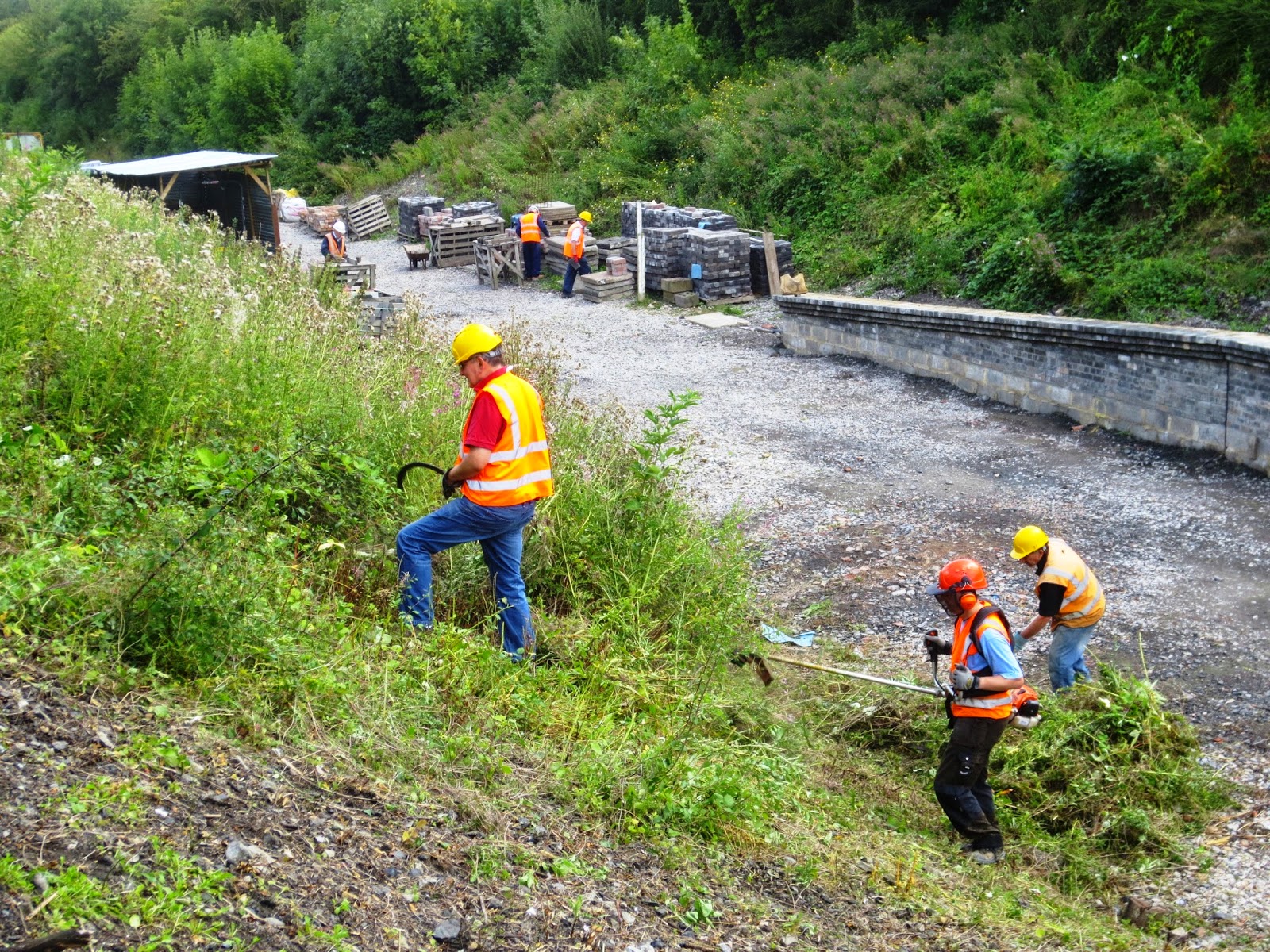 In this picture Phil has started up the 'ole brushcutter, while Keith is desperately trying to keep up with a small sickle. Steve had a go at dragging the cleared material down the slope, but it was pretty unpleasant work for those with even only the slightest leanings towards hay fever. Brick cleaning continued in the background, with the Avonmouth retrieval providing an inexhaustible supply. By lunch time the area was successfully cleared, so setting out can now start. 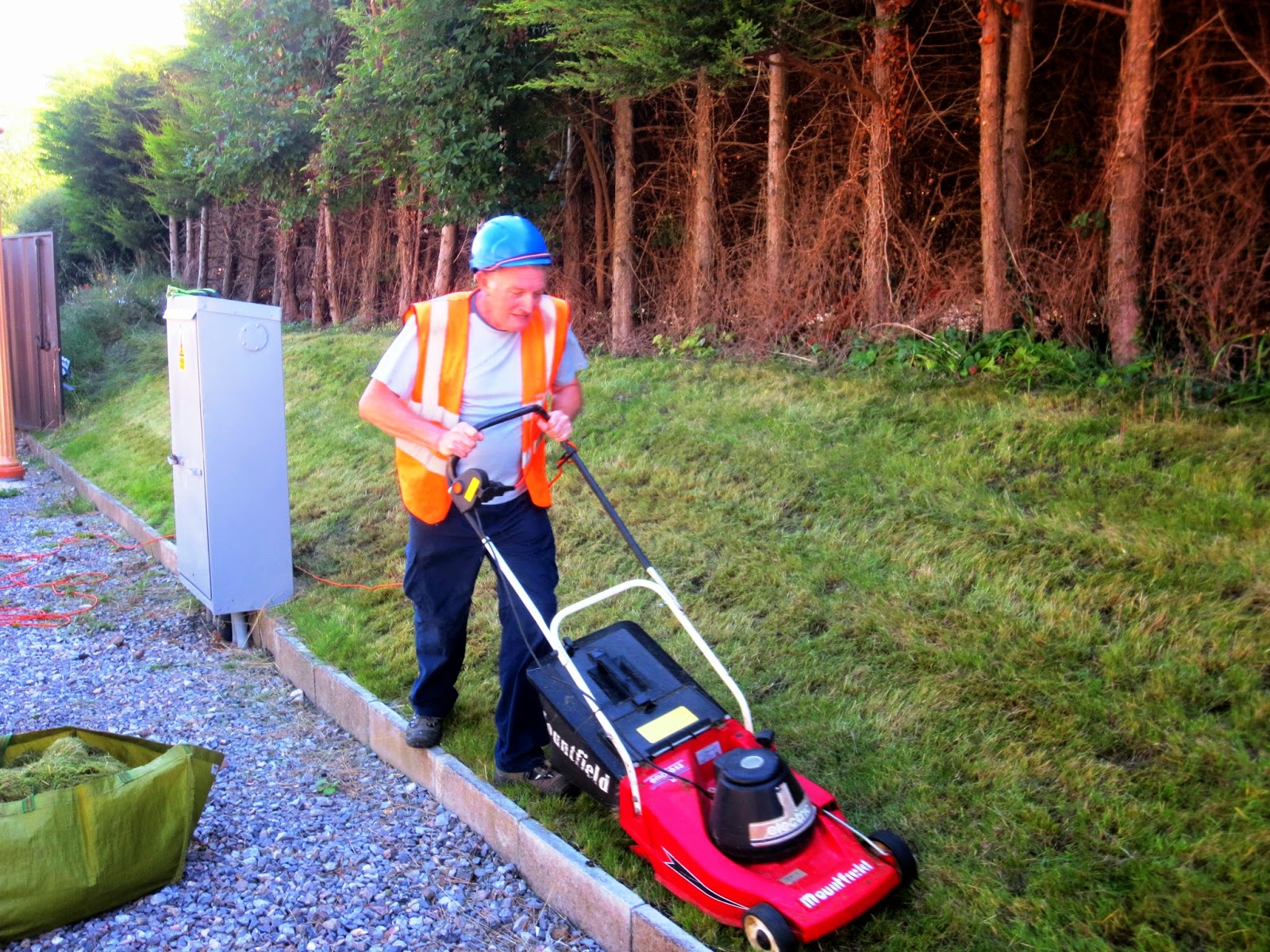 A few months ago we threw a bag of grass seed at the slope beneath the B&B, and to our surprise it came up pretty well. Here is Jim giving the slope its first cut. Nice stripes, Jim!

Marguerite did well today - she sold a set of garden chairs/table donated by yours truly, and sold the painting pictured in the blog last week to - yours truly! The BAG profited both ways.

John B carried on repainting the old office hut, which now sports a gleaming coat of 'Parchment'. A personal tour round the site given to an interested visitor also resulted in a kind donation - anyone else interested?

No progress was possible on the signal box today, as various parties are currently on holiday. Key personnel are also allowed their fortnight by the sea.

On the other hand, we came across an interesting picture in the house of a colleague recently, which we were allowed to photograph. Apologies for the poor quality; it's a photograph of a photograph behind glass, but nonetheless very interesting, and one we hadn't seen before: The caption on the back states that it was taken in 1948, and shows two Halls on a S. Wales - Birmingham express. The leading engine is 5988 Bostock Hall. Looking at the exhaust, the train is going well, and could be quite a long one if double headed. You can't see the tail end, due to the curvature of the line. Can anyone say more about the picture? Was this a regular working then?

5988 was a Gloucester engine 08/50.
If it was so in '48, then it could have been put on, at Gloucester, a regular service train which was in a bit of trouble.
Shortish shadows across platform 1 suggest a summer morning.
Most summer extras from the South didn't appear til the afternoon.
Paul