One of the main achievement  was the retrieval of  16, 3x2 and 30, 2x2 slabs from Norton near Evesham. These were kindly donated by Norman and Margaret Clark who are great supporters of our efforts at Broadway. This was a logistical challenge to get the slabs loaded on pallets and within reach of  the  transport.  In this case it was Terry's friend Paul, owner of Tecton Timber Products who once again came to our aid. I've lost count of how many times Paul has helped us out, but needless to say it is much appreciated. 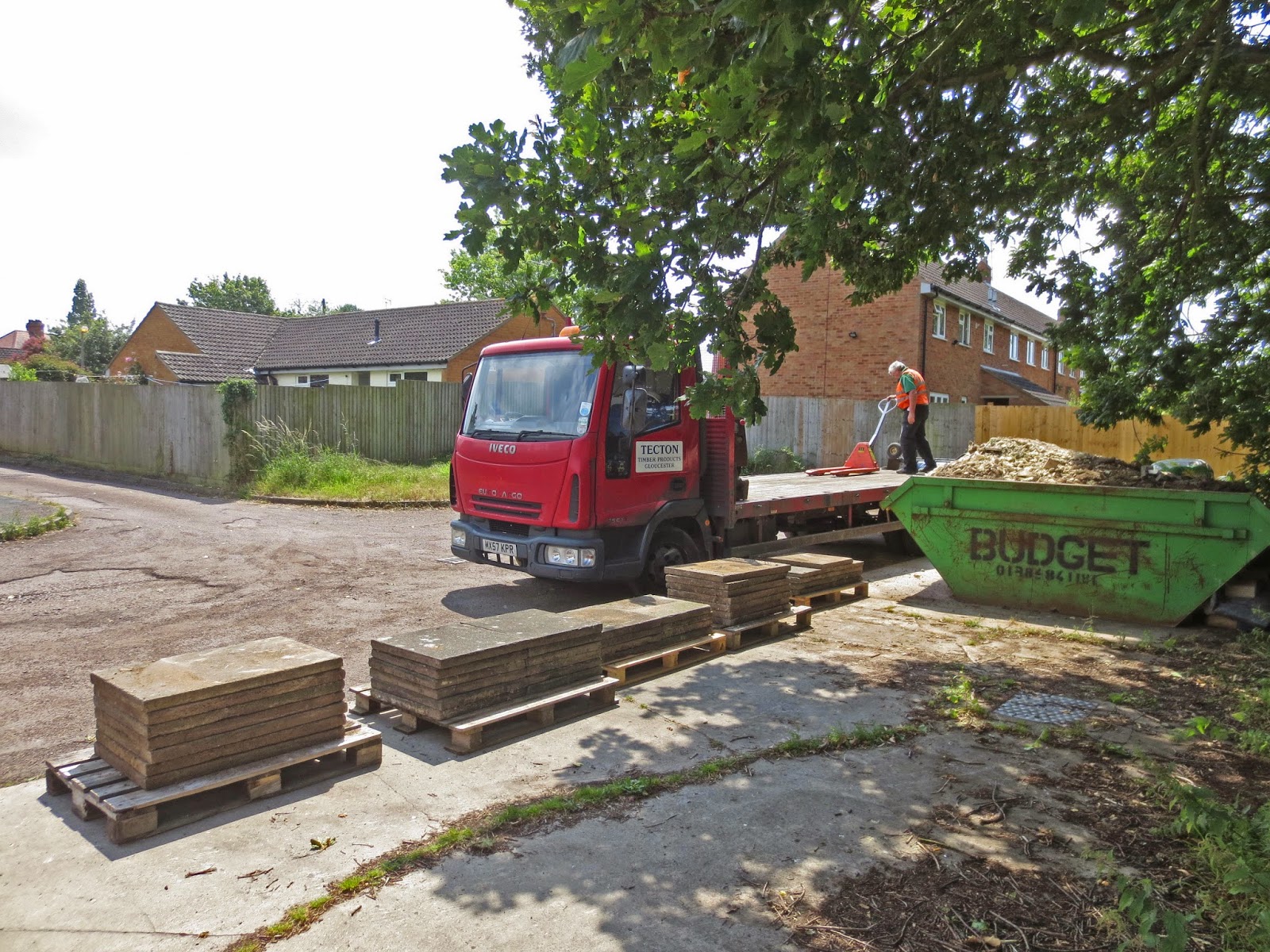 Terry and Jo went over to Norton in advance to move the slabs on to euro pallets. No mean feat in itself! They were then loaded by crane onto the Tecton lorry and transported over to Broadway. Prior to that Paul had already delivered some surplus bricks to Cheltenham Racecourse Station for use on Platform 2. 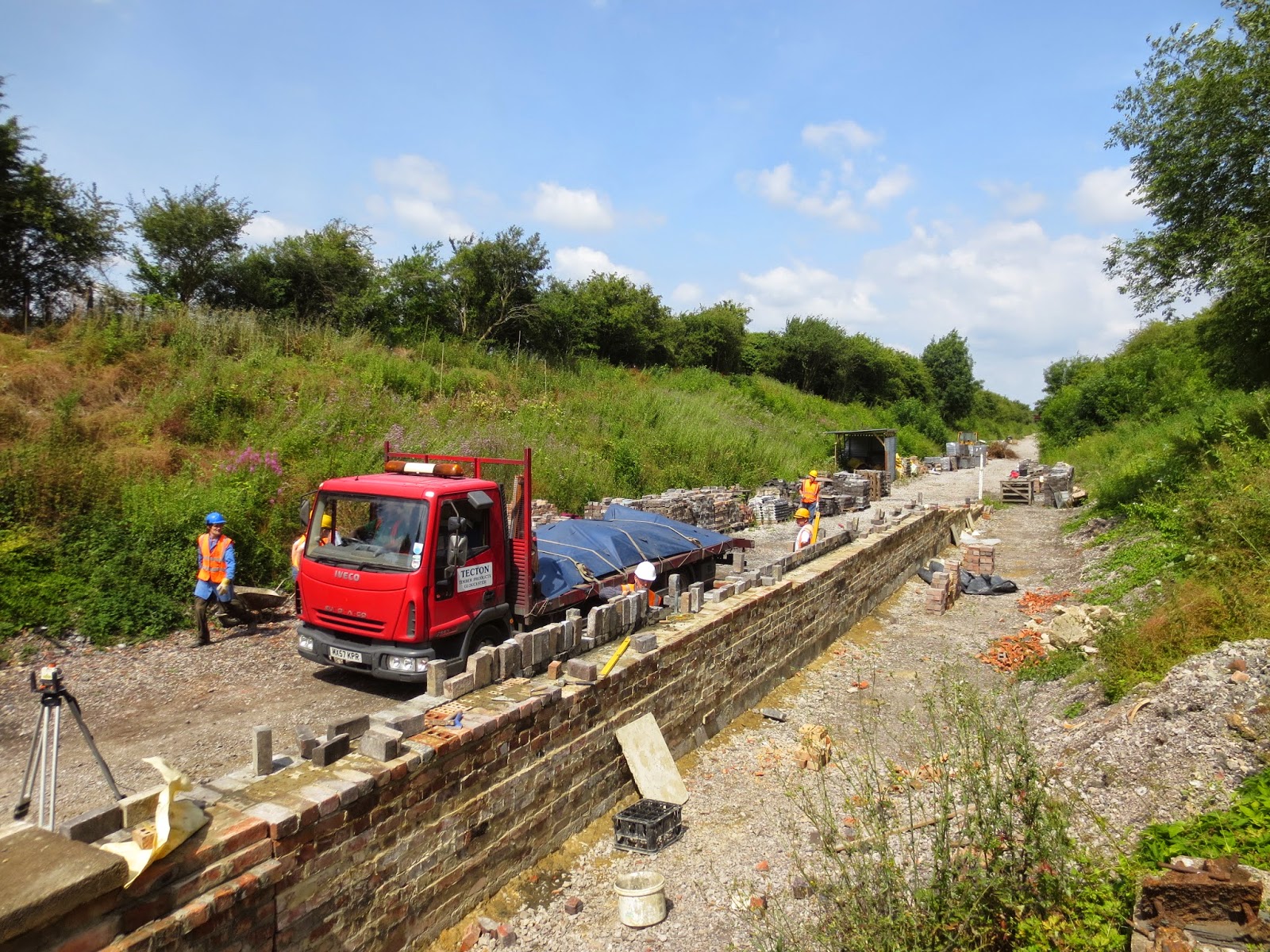 Back at Broadway the slabs were unload just north of Platform 1C where they will be used to contain the platform along the embankment at the rear of the platform. 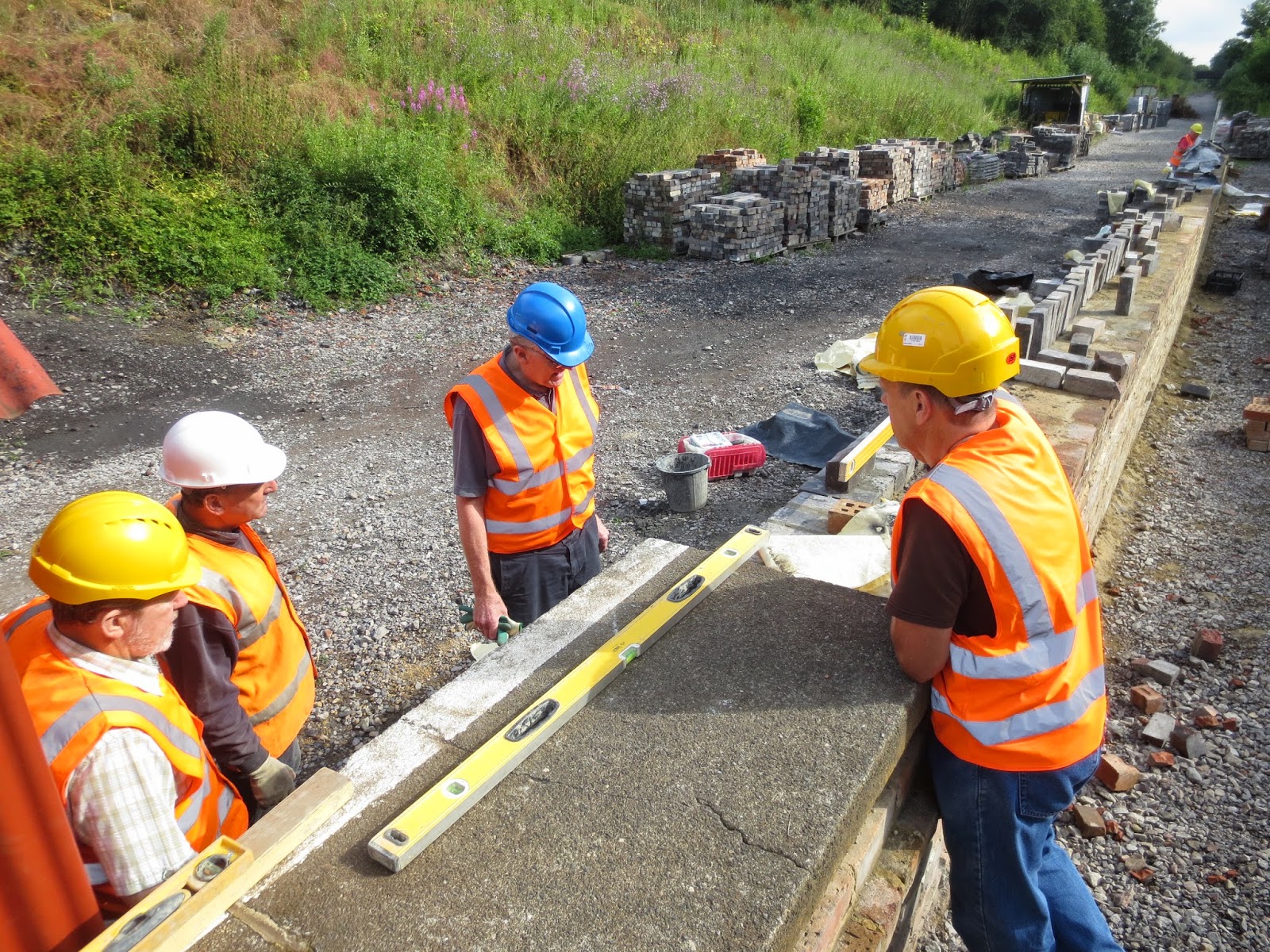 Platform 1C is continuing to progress. Here I had a discussion with the troops about about a couple of "technical" issues, before work started in earnest! 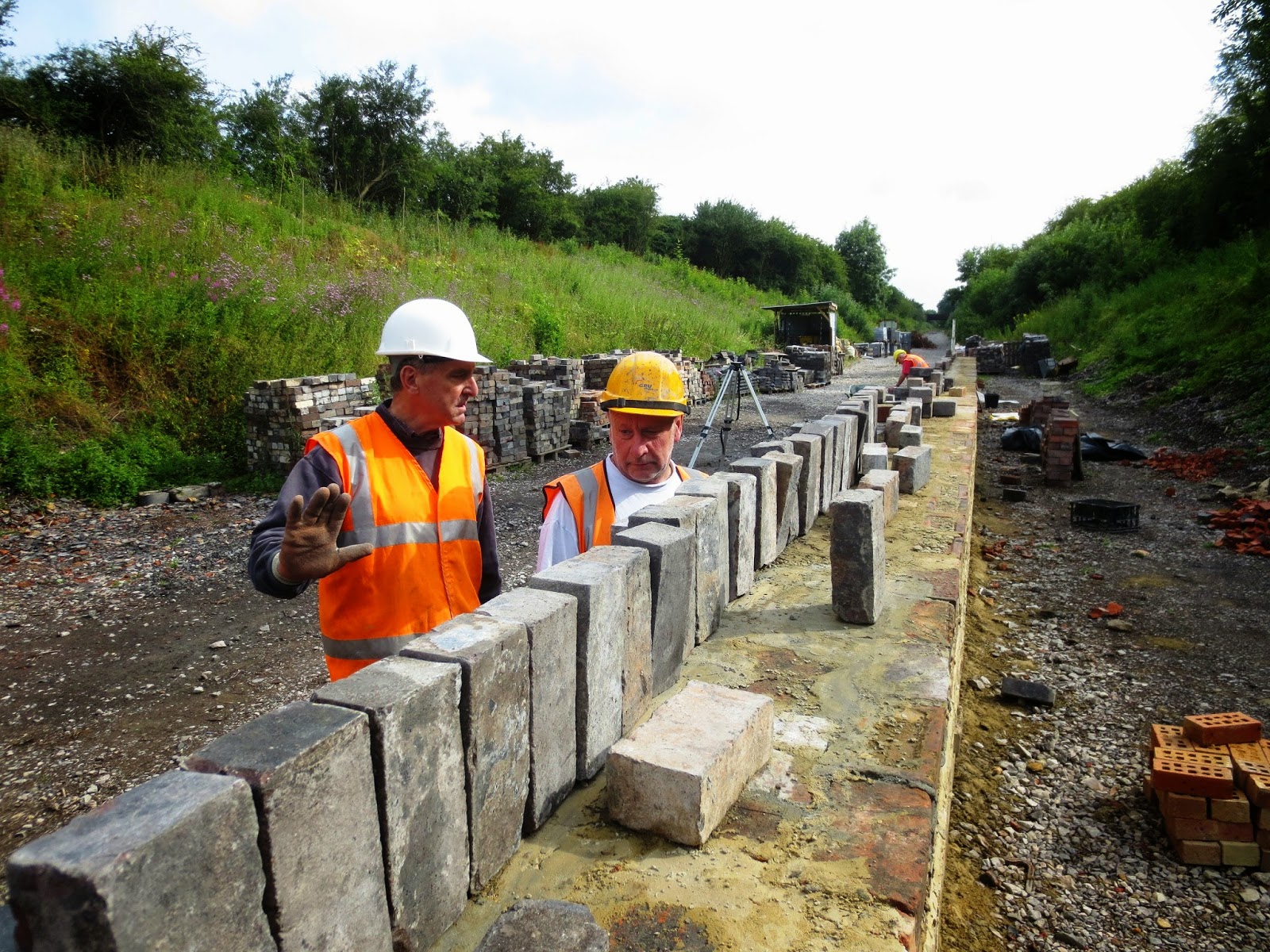 It was great to See Roger B back in action.  I, and his  volunteering chums had missed him.

I didn't see  the state of  brick laying at the end of the day but I'm sure the the level surface  must be nearing completion.

The other things happening? Mike S, David, Chris and Rod shifted 700+ blues down the track bed, next to 1A.  (Another 1800 to go!)These are to be used to fill the Signal Box gap in Platform 2. It is imperative that we have a full set of matching bricks, colour and sized to blend into the existing wall so that you "can't see the join". The transfer also allowed us to start clearing space for Platform 2C. 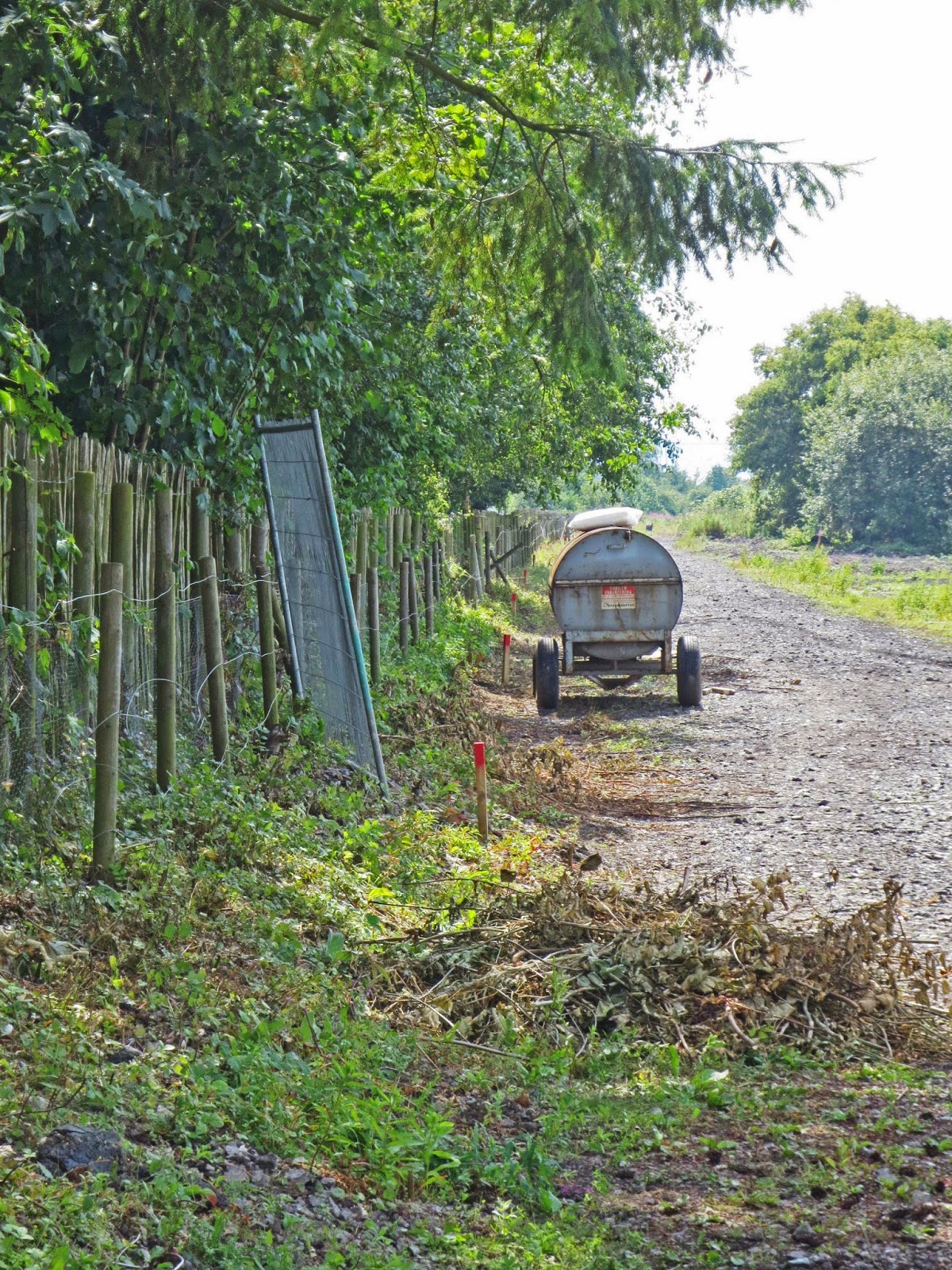 Beyond the bridge a joint Team of Volunteers were surveying the line of the track between the 2 bridges. Theodolites, measuring wheels, pen and paper were to the fore. This will be reported in another posting.

Finally this is my 900th post.  Forgive  me for the typos, duplications and down right boring bits! It is not always easy for the words to flow when your trying to get things out in a timely way. Jo's consistently good photography, promptly sent, is a god-send in tying things together. Thank you Jo.
Of course I would have nothing to report but for the consistently hard work of the volunteers. I'm sure they get fed up sometimes of me using the royal "We" when it's their blood, sweat and tears being expended!

I look forward to the 1000th post which will be recording progress on the Station building and the  P Way Gang visible on the horizon!

Onwards and Upwards!
Bill
Posted by Bill at 20:35

Typos and other slips are not what it's all about. The content is the most important thing, and it's always interesting and informative.

Thank you very much, you make my day.

Agreed, the commentary with the photo's make it all worthwhile. No update on the signal box? Missing my fix of scaffold and arches! Keep up the amazing work.

What has happened to your Broadway Signal Box Webcam. It looks like I'll have to go back to gardening on Wednesdays and Saturdays rather than watch your excellent bricklaying activities. Seriously though, keep up the good work and particularly the reports. I am sure they have a significant effect on "armchair" support.

Buccaneer,
Re the camera. We get internet access from Marguerite's adjacent cottage (with her permission). This summer has seen the trees and vegetation getting more obstructive with the Wifi signal. This week the host BT router in the Cottage has failed altogether!. It will get fixed.

The Security System is independent of the internet and continues to work well, by the way!

Many thanks Bill for the informative reply. Much appreciated.

Always a great read, all the way from Australia I look forward to seeing how it all is progressing

I went to visit the station site the other day, and it was great to see all the amazing progress that has been made. One thing that struck me though, is that platform one appears to be lower than platform 2! I don't know if this is an optical illusion, but to my trained eye, it certainly looked as though there was a difference in height! I would love to be corrected on this, i'm in no way doubting the brilliant skills of the Broadway team!

Should have gone to SpecSavers!

will you be having a webcam overlooking Broadway sttion after it is finished?

Yes, and maybe a bit more reliable than the signal box!