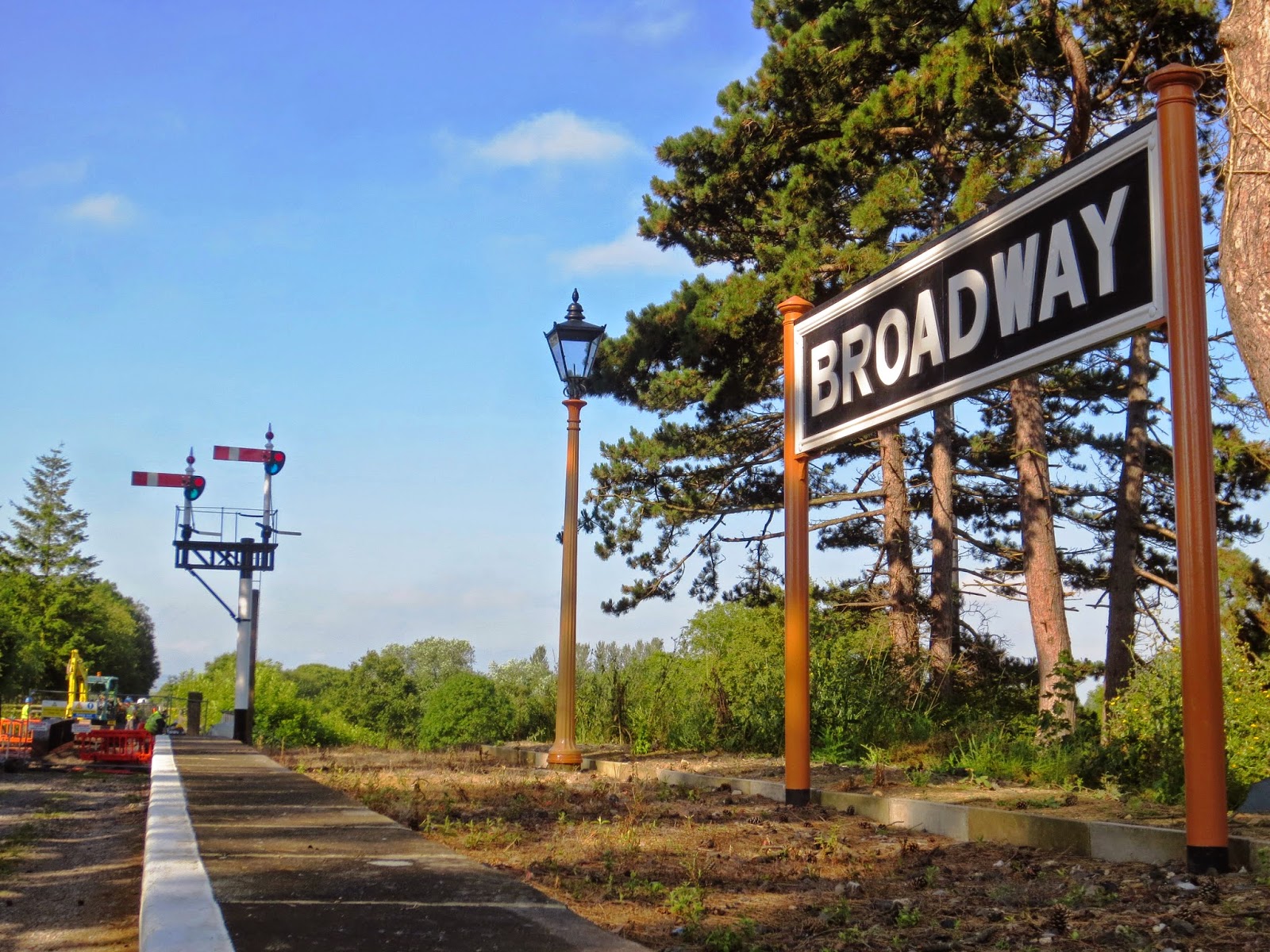 Apologies for the "delayed" post but I was unable to get time on the computer last night. Wednesday was a great day for the Broadway Regulars. Although the arrival of the fully dressed  bracket signal might seem  a small step, for the volunteers it is a very real manifestation of progress and compensation for all the "blood sweat and tears" expended on  more mundane things. 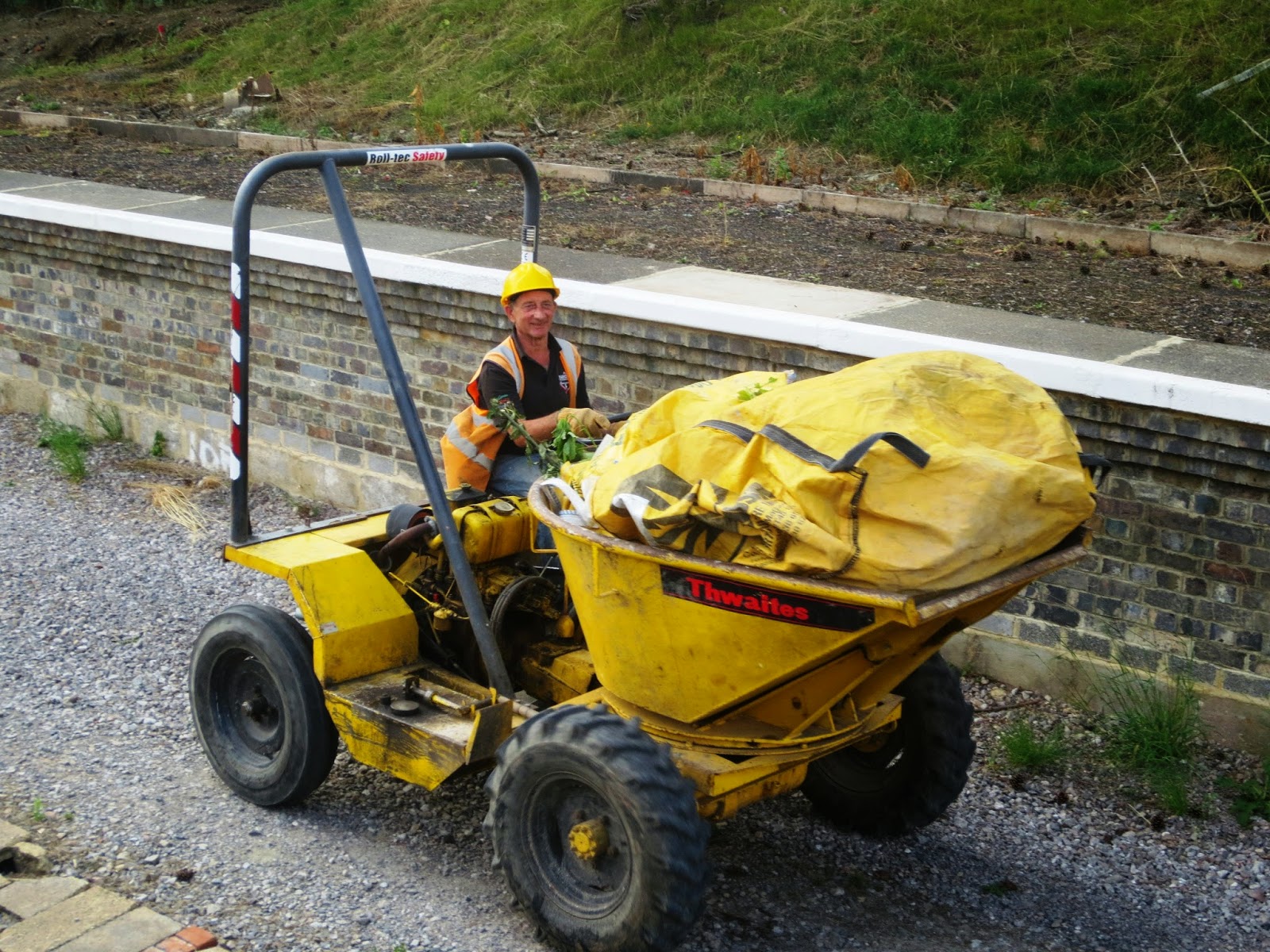 Talking of "blood, sweat and tears", it really was a sweltering day for the 16 volunteers on site yesterday. The jobs in hand didn't make it any easier to cope with. With the impending completion of the Evesham Road Bridge it was decide to clear back the  adjacent embankments of all vegetation. Brian, Ron and Dave slogged away at this all day, and I'm sure a few pounds in weight were lost in the process. A photo of the action didn't appear from Jo - perhaps he can delve a bit further on his camera?

Here is Steve taking one of many loads of cut vegetation up to the bonfire. 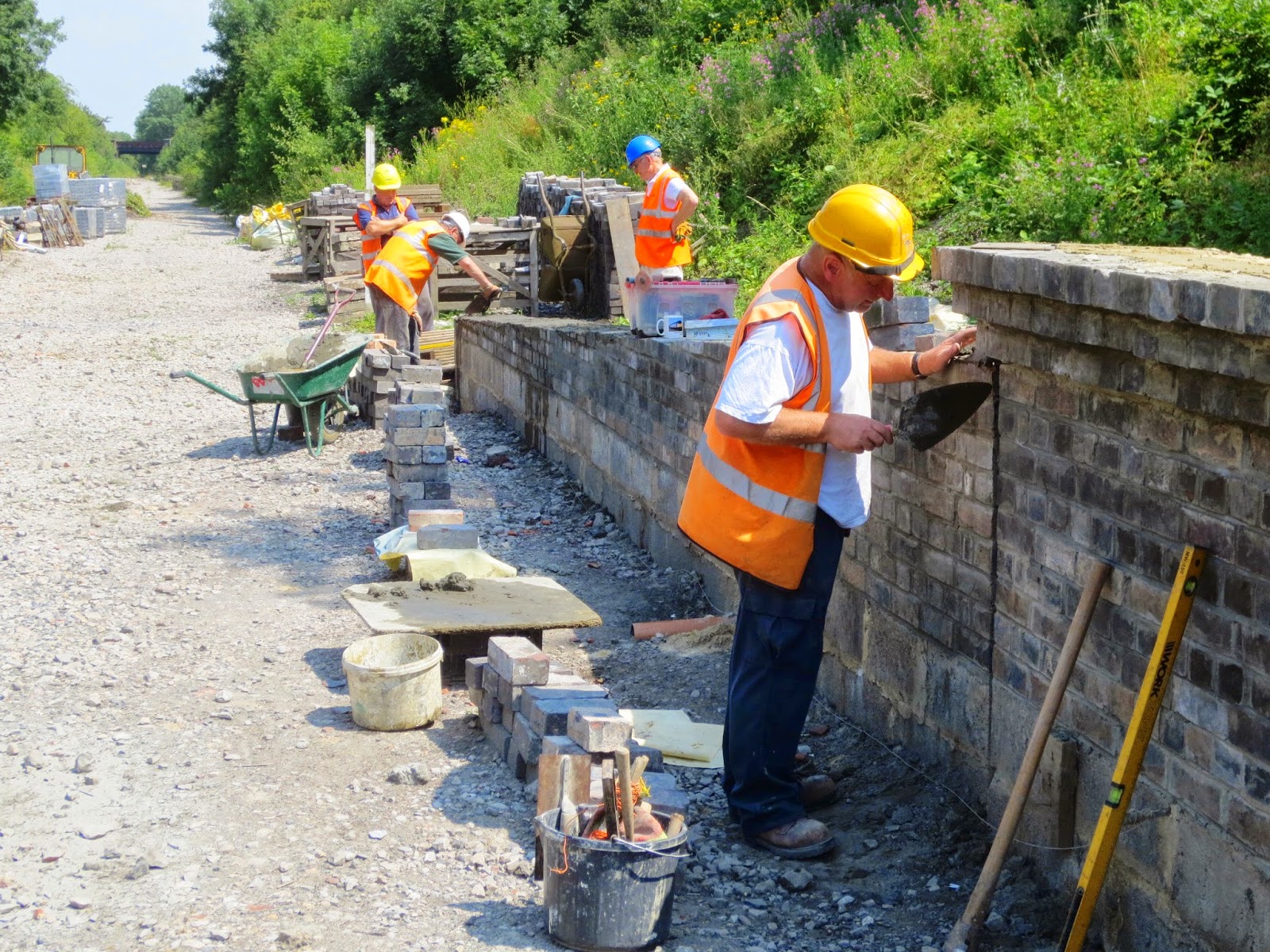 Work continued on Platform 1C, both on the bricklaying and starting the infill of the void behind it.  The latter is no small task. It has begun by depositing any rubble that can be found in an even layer behind the wall and then covering with ballast. What was remarkable that the determined efforts of the gang working on it (Terry, Mike, Gord, Dave and others) managed to get a 9" deep layer along the whole length and depth of 1C. Again I'm sure a few pound were lost, and aching backs were the order of the day.


What was less obvious to the casual onlooker was Tony B  laying the backing bricks on the top courses of the Signal Box. All that could be seen was the top of his HH. Well, with support from Paul and  Steve, the job was pretty much completed. The joists were loaded inside the box, ready for installation. The scaffolding is going to be lifted to its second position on Saturday. Watch this space! 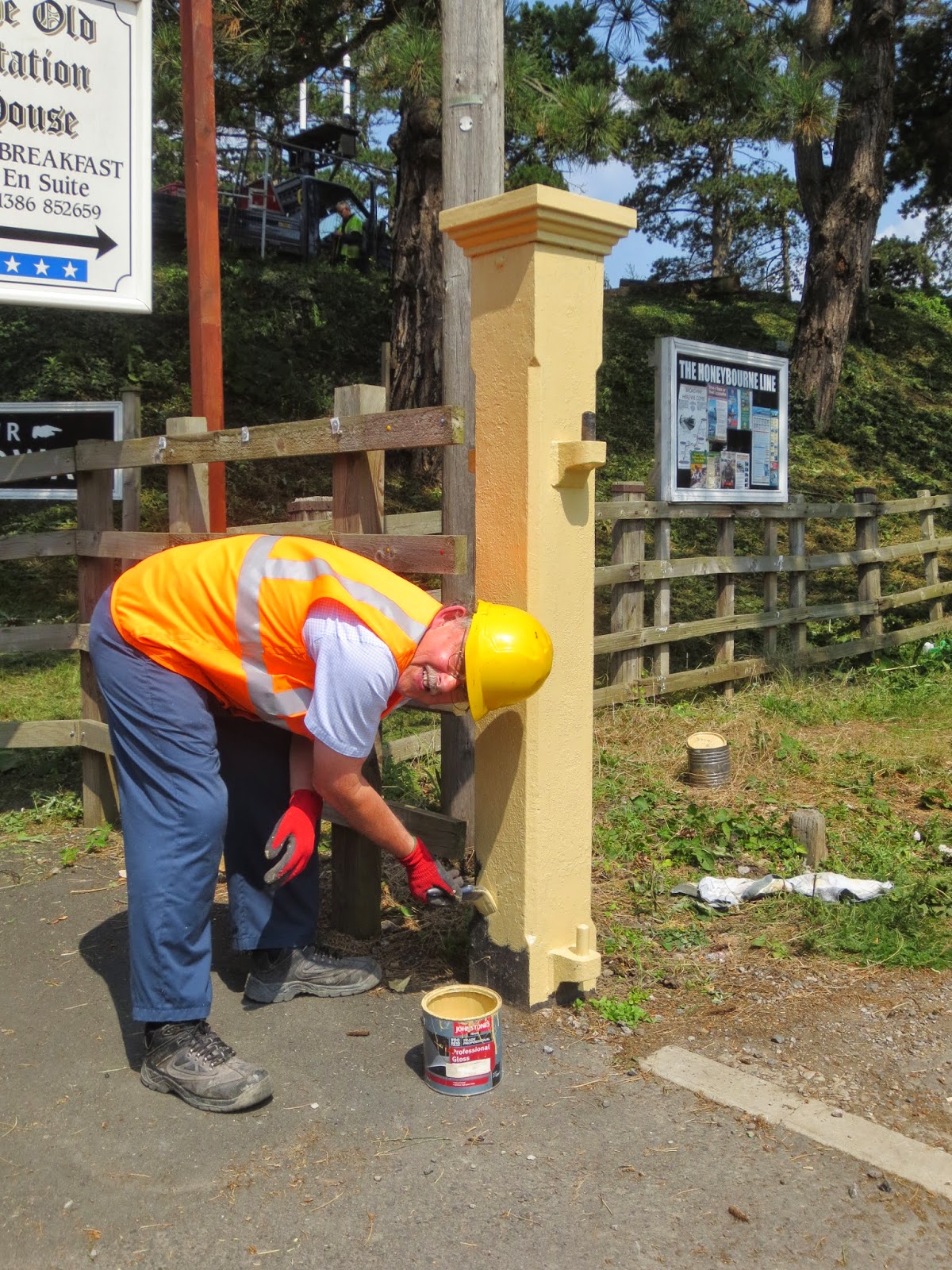 There were a  a few other important jobs completed also. The white gates at the bottom of the drive have received a couple of careless lorry strikes and needed removal for repair. In doing this we also decide to paint the old GWR gate posts that remain in situ. Any lorry that comes into contact with them will know all about it!

Finally The garage had a interesting visitor (with a rattle) in his US Hupmobile. What a magnificent beast it was! The only one in the UK apparently.

I know it might mean a bit of aborted work, but are there plans to get a few track panels down in the platform area to show a 'what-if' scenario?

A temporary restaurant coach installed would generate vistors and food / drink revenue too...

Let them finish building the platforms first! Then this may be considered!

Yes, I see John Dyer's point. I am impatient to see these things too. The erection of the "dressed" signal is a huge step forward. Broadway station really is beginning to re-emerge!

However, the site of Broadway "redivivus" is still a building site, with all its attendant hazards, and is (I presume) off limits to visitors.

Interest in the station will grow, as the station grows. At some stage GWR may need to look at this. But not yet, I think. Give the brave band of volunteers a chance to get on with things.

Better yet, make a donation to help make this happen ! (I'm going to.)

Meanwhile, let us be satisfied with, and very thankful for, this great blog and for the photos showing the progress being made.

Thank you, volunteers, we really appreciate your magnificent work !

Well put peter.. I was thinking something like that at say the northern end... A few panels and a facility coach for the working volunteers, but then realised they have good facility's already in the containers so bit of a waste of money. I did think a panel across the bridge with a pannier tank engine sitting on it might be quite cool tho!
Are there any building works going on nearby? There could be a good source of hardcore from these sites, as it often costs house builders to remove this waste

So if it’s not too much of a presumptuous question, I count one bridge to Honeybourne, is this going to be given the same treatment as the other five, or will we have to wait for the next instalment?! (;-).
So close......

The GWSR only own the trackbed to the northern end of the Broadway Station site. There is a lot of negotiation to go on before we think about bridges!

Also, Billy, there are at least five bridges to Honeybourne if you count overbridges. Some are held up by jacks from our trackbed. A big & expensive undertaking, I'm afraid.

Is the railway resposible for overbridges though - surely that would be the highway agency or whoever?..

I appreciate those thinking ahead, but personally I will be pleased to see the first scheduled train arrive and depart from Broadway!

Answer from JC our Construction Manager

Hi Bill,
The Joists are all ‘Tanalised’ timber , which is recognised as a very good form of preservative treatment, and will survive in virtually any damp environment, furthermore the brickwork surrounding the joists is good quality smooth red which has the ability to withstand rain and the sand cement mortar has s good resistance to damp penetration. Hope that satisfies the enquirer.
Regards
JC