There were 11 volunteers on site at Broadway today, and 4 others on a mission to retrieve some bricks from the grounds of Gloucester Hospital.

At Broadway the Signal Box has reached another milestone, with the joists being laid  on the cabin floor - but I'm getting ahead of myself! 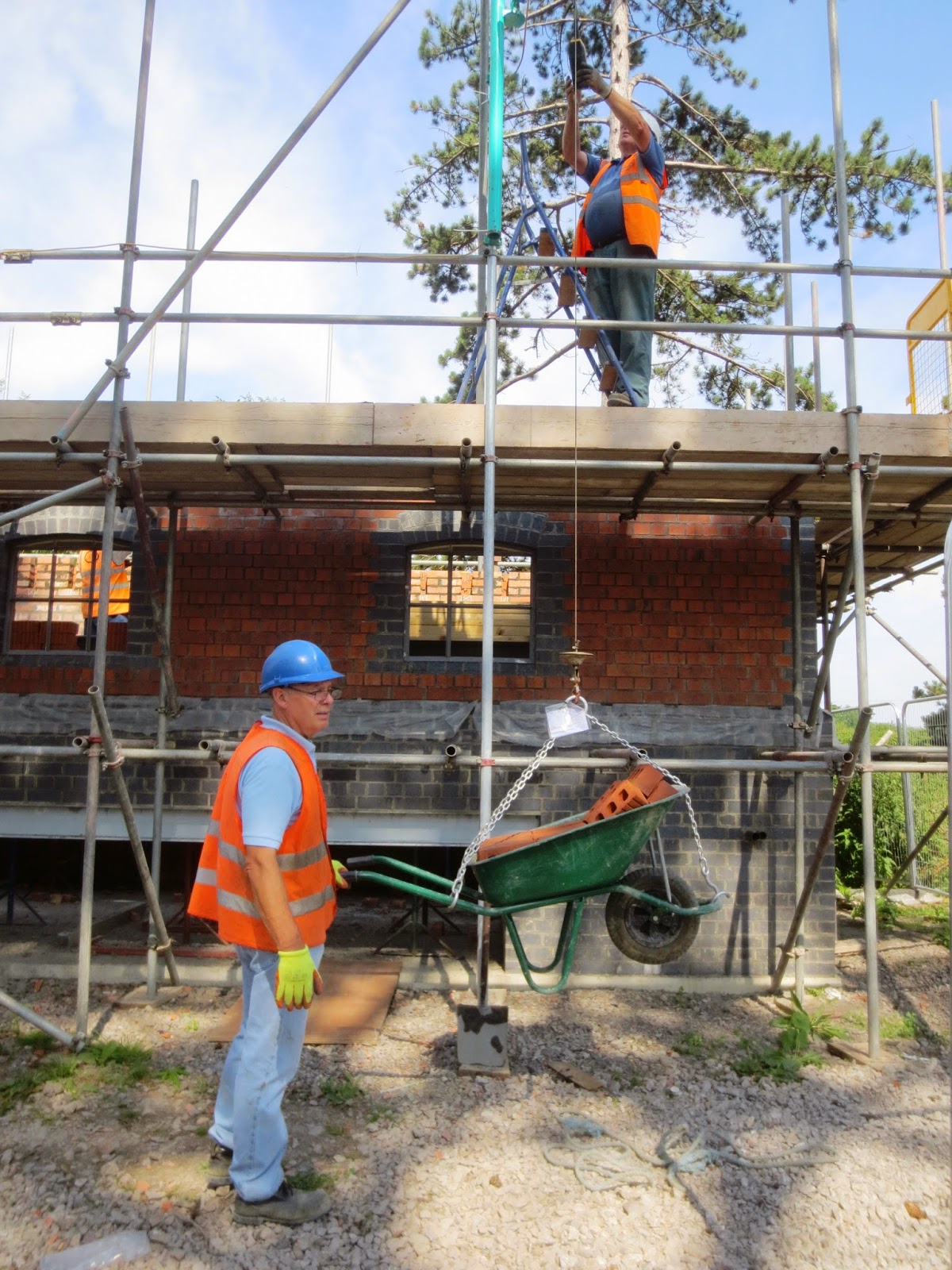 On Friday the main scaffold was lifted to its second level, thus allowing the brickwork to continue and the windows to be installed. JC and John S came in to supervise this. This was completed during the morning, with some extra scaffolding  put in place to accommodate an electric hoist.  On Saturday morning the hoist had not yet arrived and efforts to manually hod bricks up and bucket mortar up made the crew realise that house building in the old traditional way was hard work! Fortunately Brandon delivered the hoist by 10 am and with a  quick lesson on which button to press, it was all systems go. 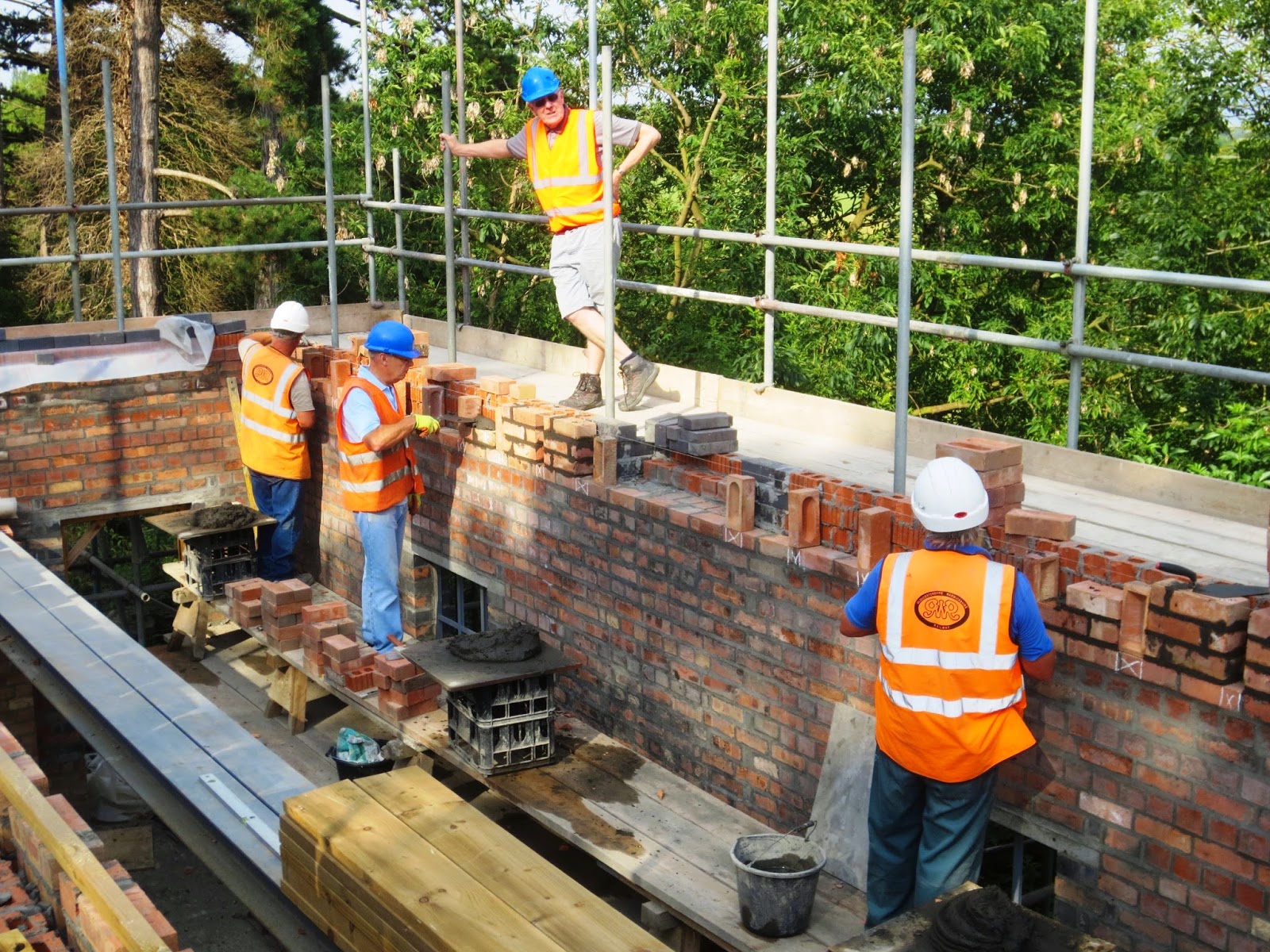 The main task for the day was to get the joist slots laid on the rear wall as a precursor to installing the joists. Here are Bob W, John S and JC doing their best to get on with the job, without me wittering in the background! 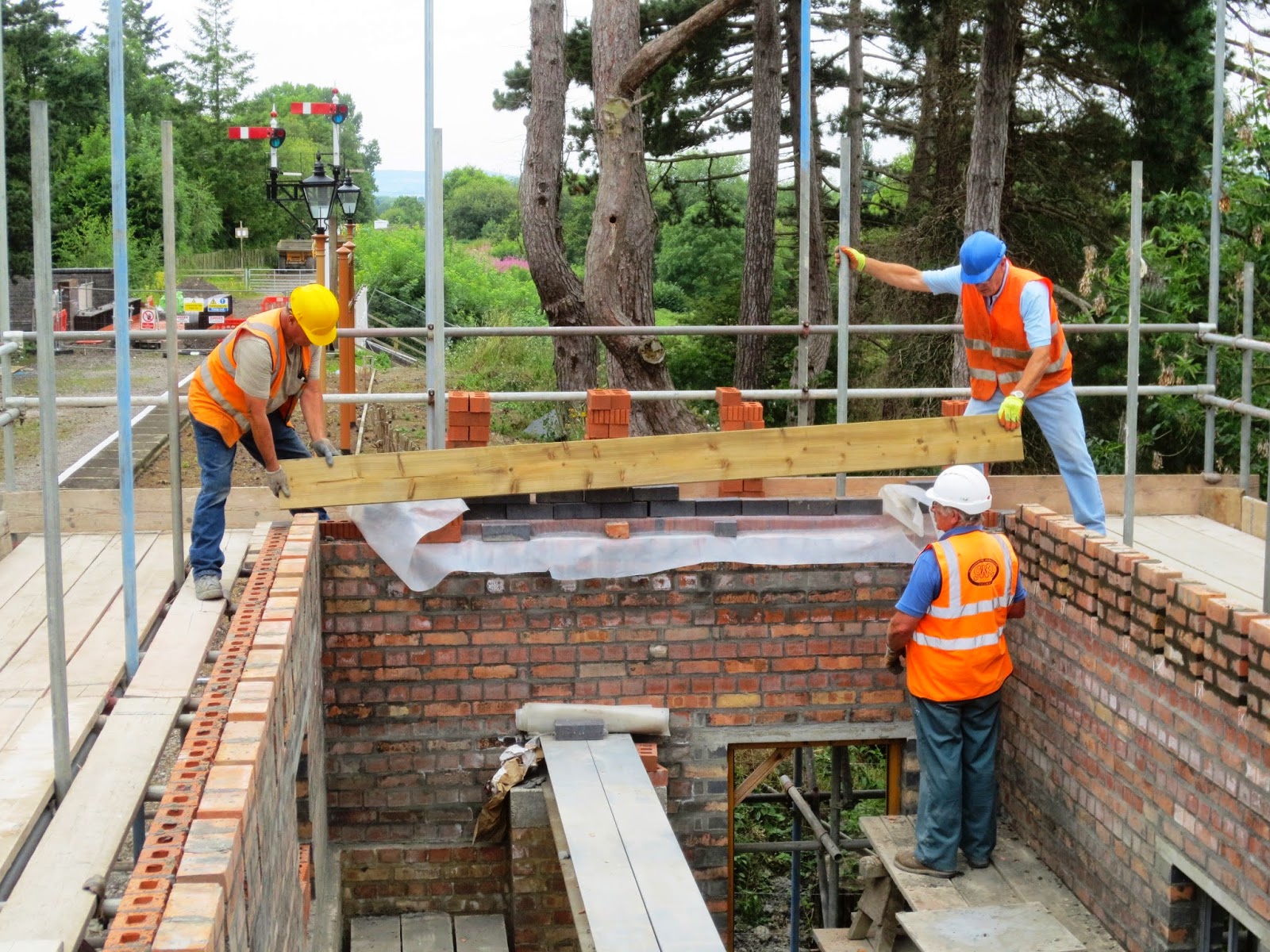 Eventually the brickwork for the joists was completed and it was then possible to install the joists themselves.  A  small milestone here, with the first joist going in. 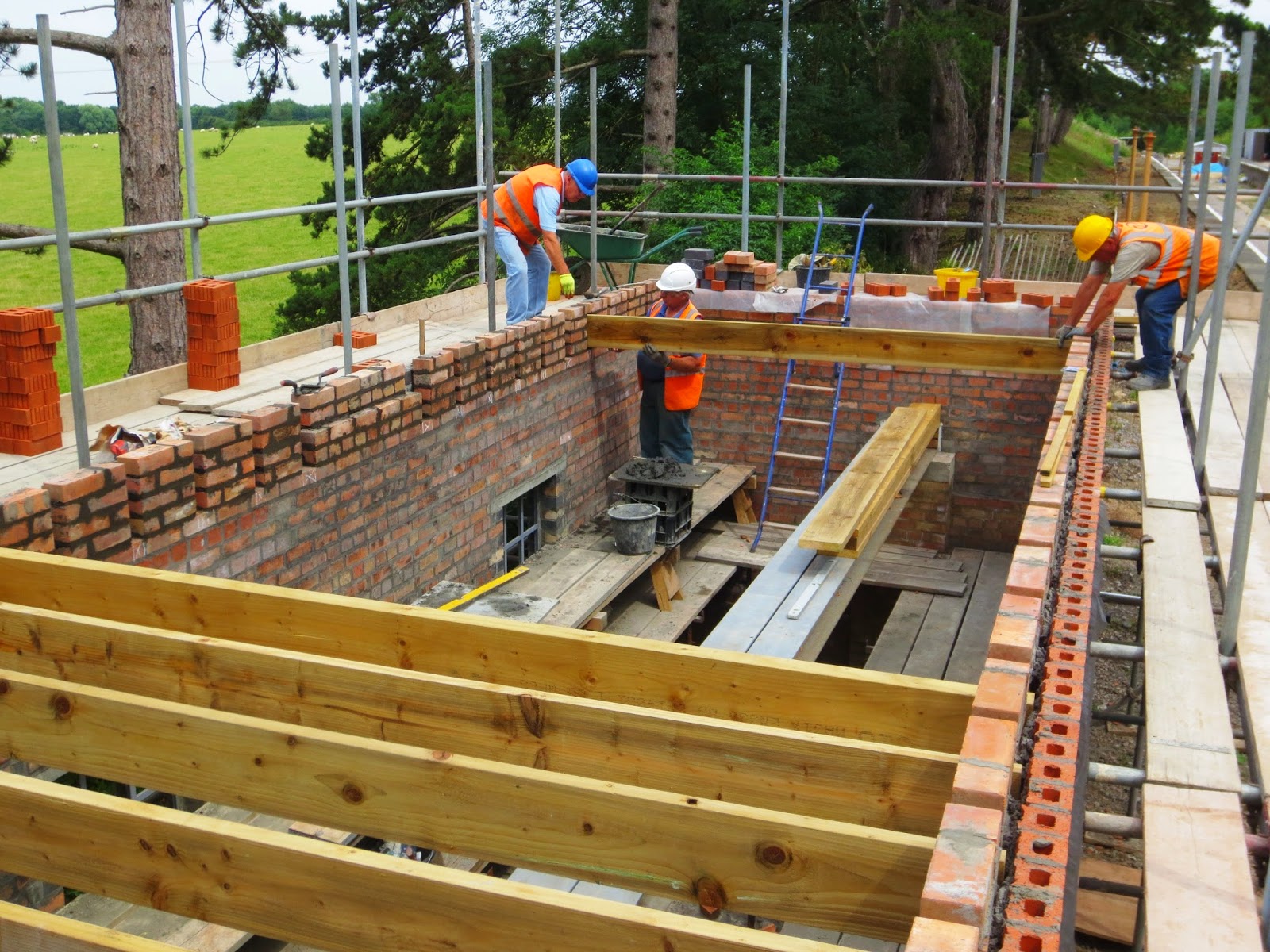 Progressively the remainder go in, leaving room to shift the trestles from below.
However best laid plans were thwarted when the power went off in Broadway, which meant there was no power for the hoist or the cement mixer. Maybe it was a blessing, because the weather was extremely warm, really too warm to work in. Nevertheless the Signal Box is all ready for the next workday on Wednesday and there will be more to report then. 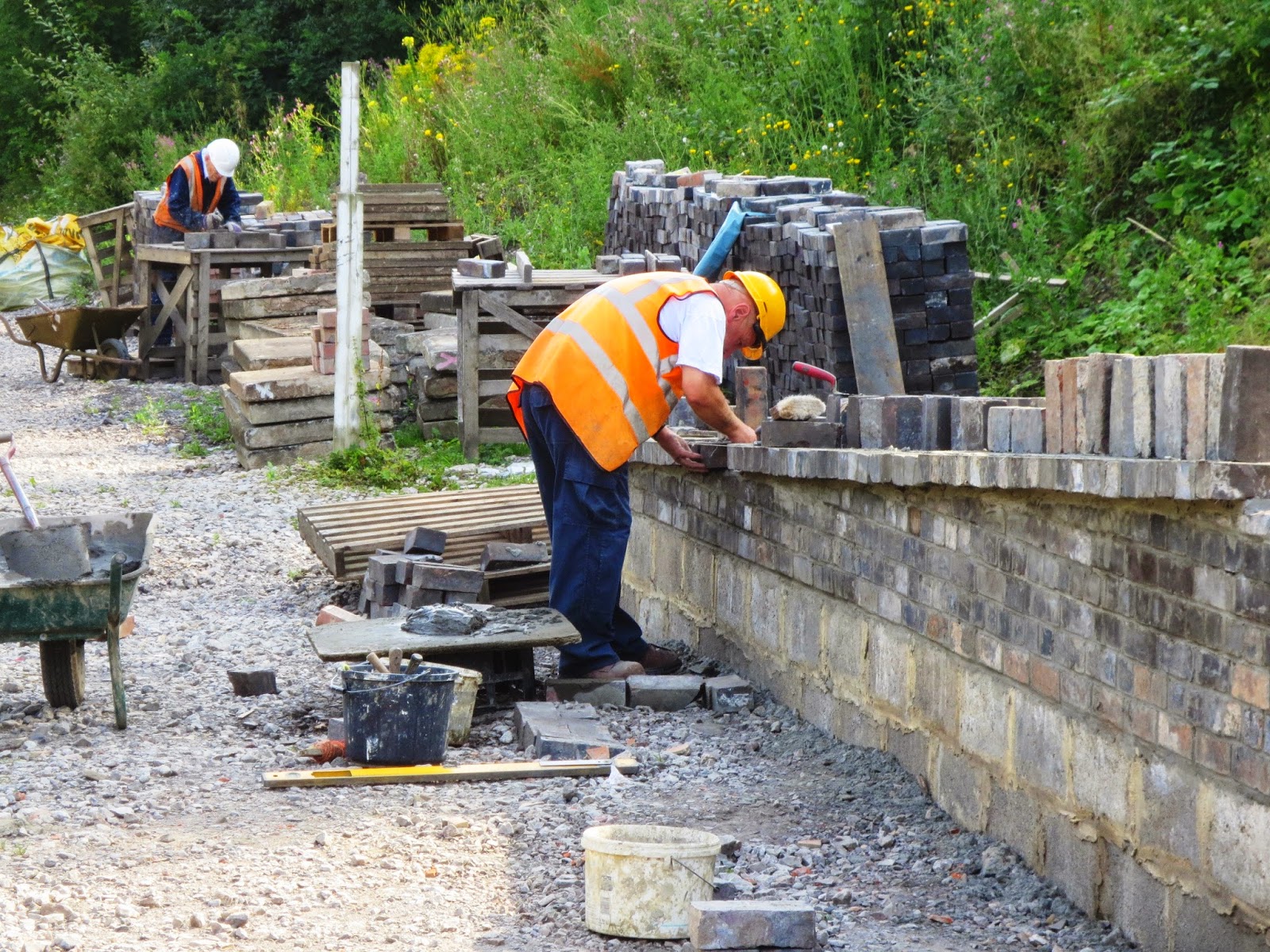 At  the northern end of the site. Clive was a lone warrior continuing with the corbelling brickwork on 1C. He did however have Robin and Peter for company in the background, cleaning bricks! 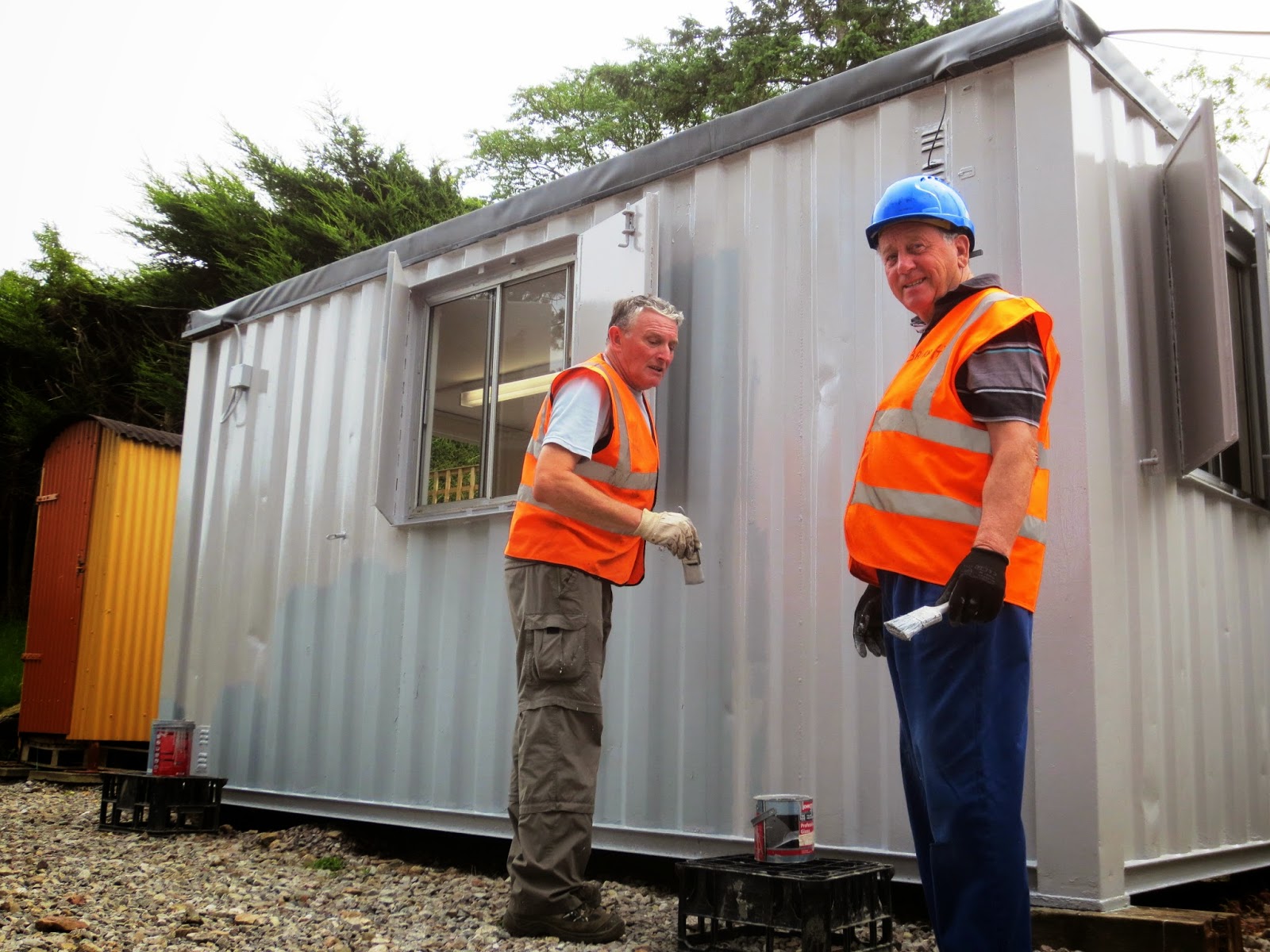 Jim H  had reminded me several times that a top coat of paint was yet to go on the project office. Well yesterday was the day - He and Brian got stuck in and and by the end of the session, three sides of the cabin were resplendent in shiny battleship grey! 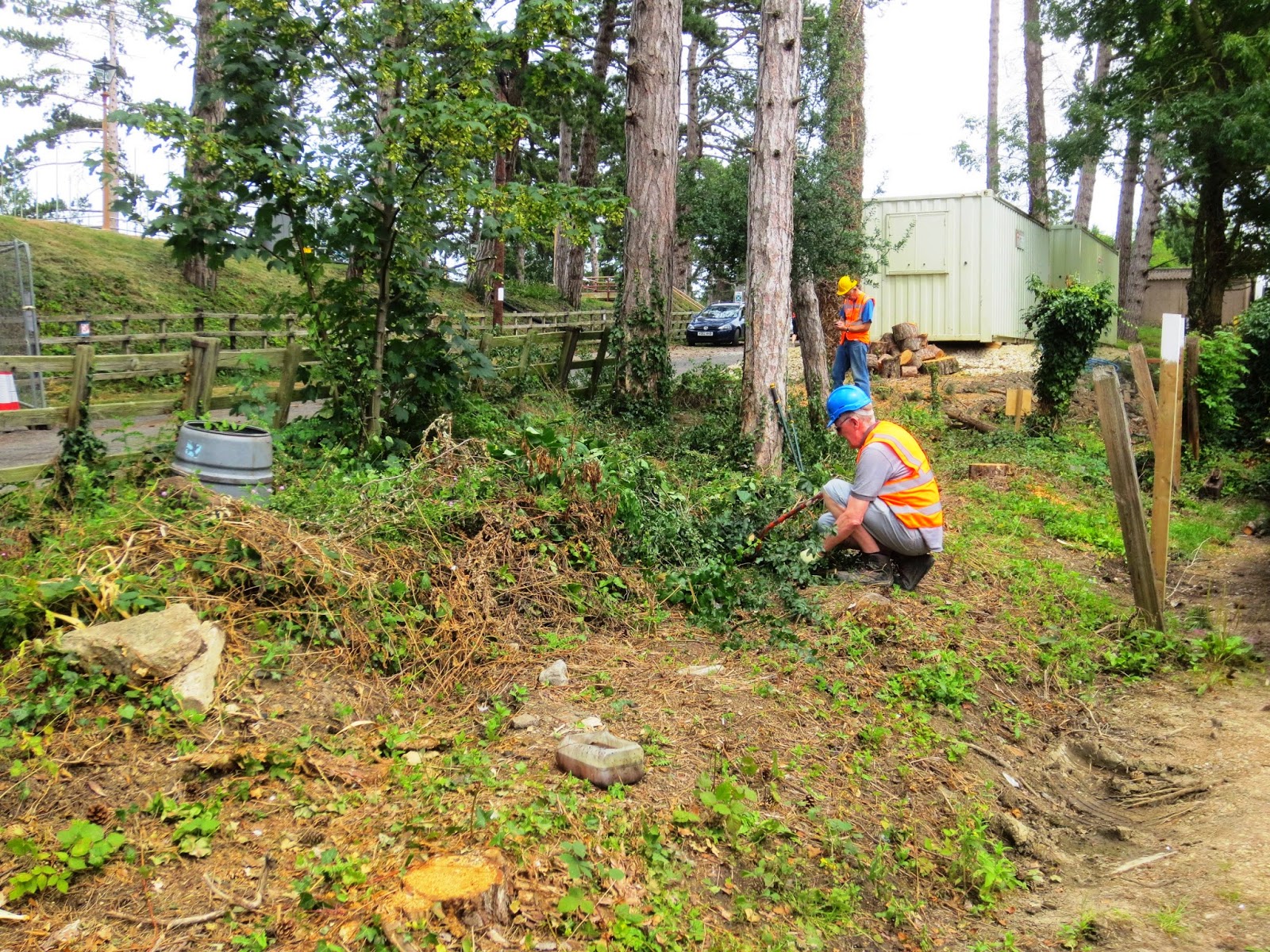 Down in the Driveway, the final  tidying up was going on,  after the removal of the trees. Dave B and Bill V slogged away at this all day. It was  rather unfair that I crept into the picture!

One of the biggest and most triumphant successes of the day was the retrieval of some 2000+ reds and 600+ blue bricks from the Hospital grounds in Gloucester. John B, Terry, Dave H and Steve B made the trip over to repallatise the bricks, ready for transporting to Broadway. The Transport (and a great deal of help) was again provided by Terry's chum Paul from Tecton Timber.

This exercise was a triumph of persistence. It was 2 years ago that the bricks were pointed out to us by a supporter, and since then we have been trying to unstick the red tape to release them to us. Saturday was the day for collection and the lads did a stalwart job, that meant 15+ pallets were repacked and the first delivery made to Broadway, Brilliant! These bricks will be used on the filling in of the platform wall by the Signal Box and mean that we will not have to scratch around to find the required number of backing bricks. I am only sorry we don't seem to have a photo of the event - I stood there watching but didn't think to take a photo. Sorry chaps!

Postscript - Dave Holdsworth comes to the  photographic rescue! Thanks Dave... 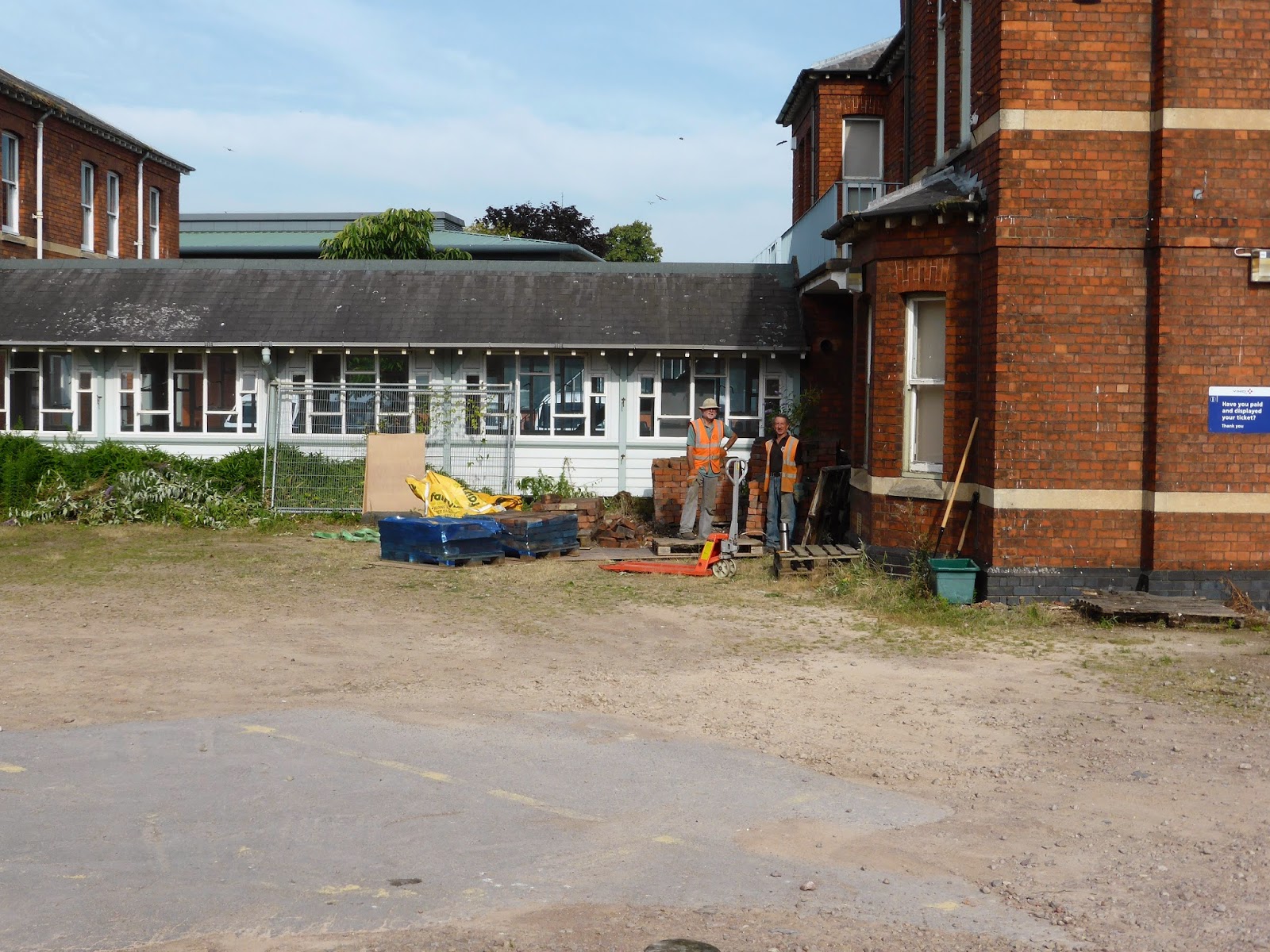 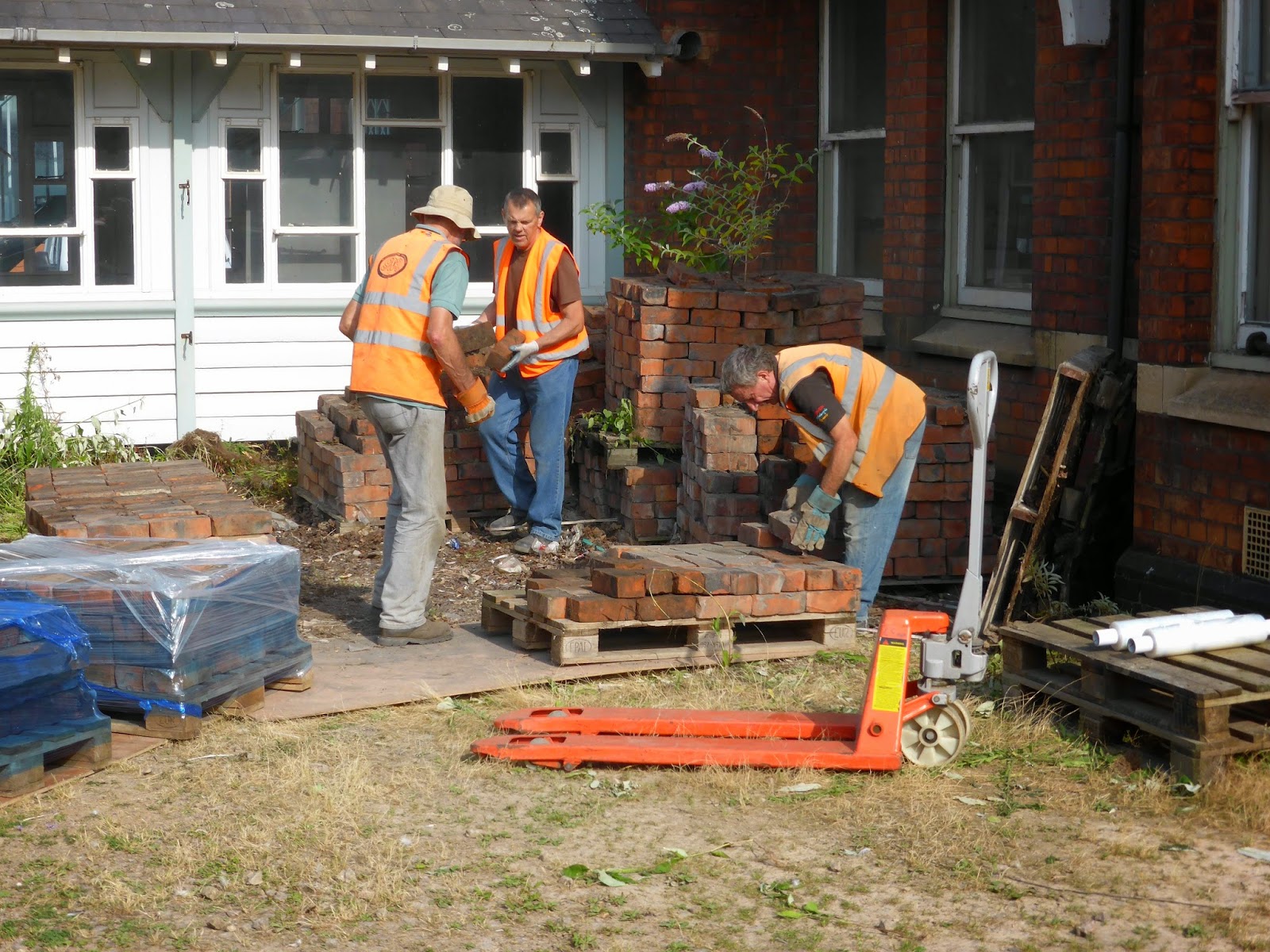 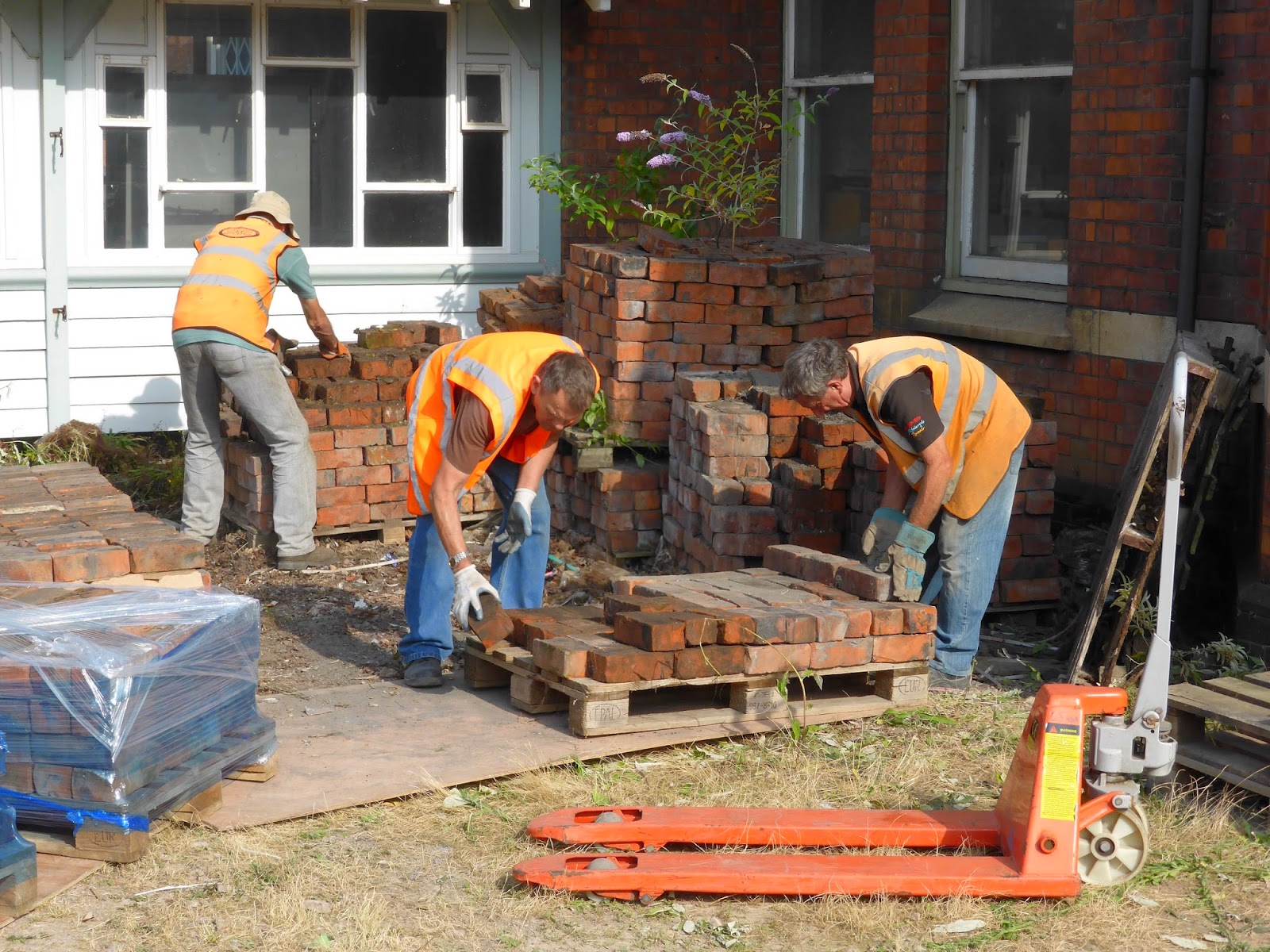 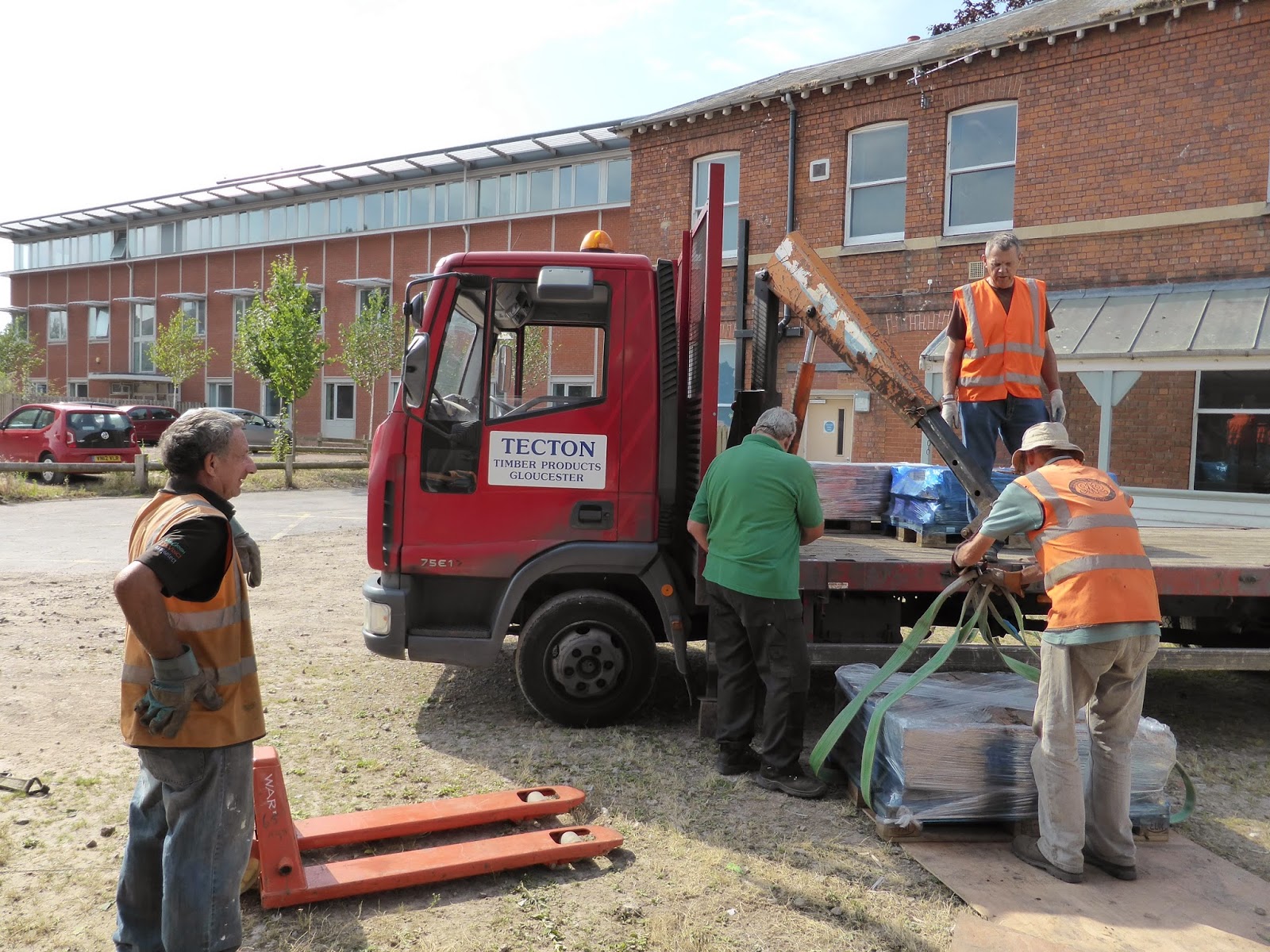 Absolutely fantastic progress, the photo of the first joist going in with bracket signal and lamp post in the background really shows off what all BAG hard work is about

as always it's wonderful to see your progress. amazing. thank you all very much.

Hi Bill. Quite interested to see the joists going in, although in my day we put the joist in first and the brickie 'beam filled' after. Joist were then treated to the herring bone bracing. Hope the joist were put in the right way up!
Regards
Andy

‘Heartwarming' may not be the most appropriate word for such a hot day, but it’s so good to see such progress. But I do worry about security, vandalism.

An off-topic point if I may.
It has to be accepted that money for the station £100k building appeal cannot be gift aided. However, if the cash donated for the Cotswold walk guys can be, and is effectively towards the same end, should not attention be drawn to the latter as the best place to direct cash?

Hi Bill
Building the joist ends into a solid brick wall isn't a practice we'd do up here in Scotland, where it gets pretty damp, however I presume you are going for authenticity with a traditional detail?

Are the joist ends protected by a cavity tray, or have they been given a good dose of preservative before they were built in?

Keep up the excellent reports, I look forward to them every week.

(PS Sorry for the technical question, but I'm an Architect to trade)

Answer from JC our Construction Manager

Hi Bill,
The Joists are all ‘Tanalised’ timber , which is recognised as a very good form of preservative treatment, and will survive in virtually any damp environment, furthermore the brickwork surrounding the joists is good quality smooth red which has the ability to withstand rain and the sand cement mortar has s good resistance to damp penetration. Hope that satisfies the enquirer.
Regards
JC

Thanks JC and Bill, that sounds good!

is this the first 'all new' GWR signal box to an original design of the millennium?
I think Kidderminster SVR was done in the 1990's?

As a fully working Signal Box then quite possibly, however there have been a few replica GWR box buildings built recently with the most recent being I think a house in Bruton, Somerset.

Bill,
Could I first apologize for hijacking your blog. Second could I ask you to help in a matter of railway heritage in Dorset, the SDJR are about to have a bridge demolished outside their station, http://www.shillingstone-railway-project.org.uk/news.php Can any one help circulate their plight and lobby as well?
They have only just started to lay track, this would be a travesty if it went unnoticed.
Sorry for the unashamed hijacking...

And on another note, what an amazing sight to see the next level of scaffold going up. I usually log on at work during lunchtime to see the webcam, great views. I have been following the blog for about 18 months now, what a transformation, it just keeps going and going.
Well done all.