It was a select band of 7 that gathered today on this bank holiday weekend. 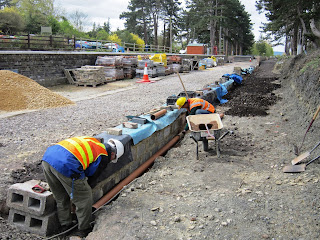 However reduced numbers did not prevent some good progress being made. The first task was to finish off the drain behind the remaining section of block work. Here Roger and Ron drop in the final piece of perforated 100mm pipe before covering it with pea gravel. Lateral drainage through the blocks takes the contents of these drains across to the centre drain. 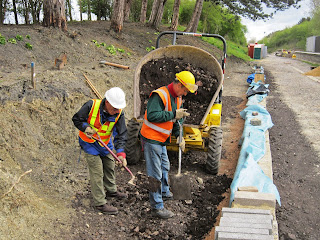 Following that  the dumper brought in loads of ballast  from south of the bridge to fill and level the  the ground behind the wall. When finished this will allow the brick layers an even surface to walk on. Also the red backing bricks can be stacked behind, ready for brick laying. 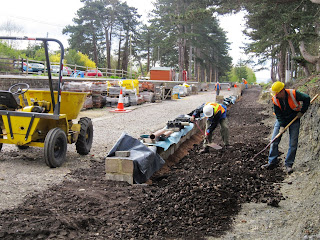 Here the job is done - it will just need rolling on Wednesday. 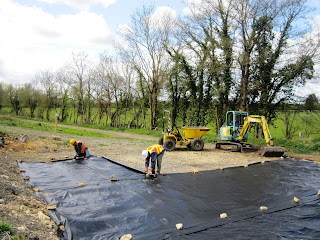 In the proposed car park area, we have set aside and levelled an area  near the gate for temporary car parking for the volunteers. A layer of geo-textile was put down today, and followed with some  ex Winchcombe ash spoil. I m not sure how Roger and Ron ended up doing two jobs at the same time. They'll have to learn to take a step backwards more quickly when volunteers are asked for! 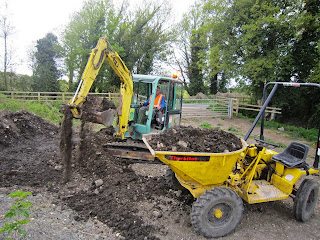 John Crawford keeps the dumper going at the Childswickham end of the site. 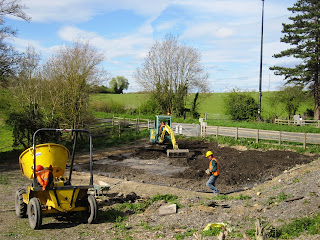 Then moves up to start the levelling out. By 5.00 they were pretty much cream crackered and have made an arrangement to finish the job on Monday. Dedication or what! 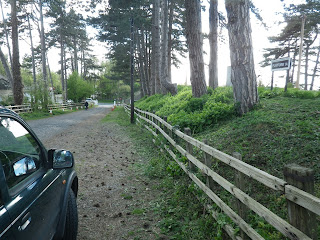 In the relative tranquility on site, John  B and I managed to start the big tidy up of the driveway and embankment. Just another 50m to go! 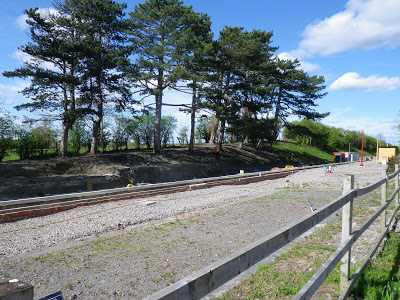 In the bright sunshine today the site took on a third dimension  and you could almost hear the trains coming!