The Bricklaying Gang with Bob White steering the action had a first class day today.

Here is Jo's take on the work completed: 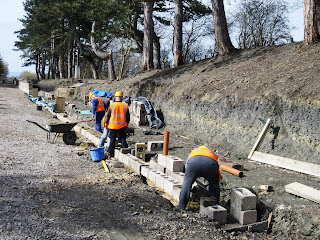 Another good day of progress for the block laying team of 6. We finished the double first layer, and then laid a single second layer to about half way along, leaving the rear second layer clear for drilling. About 117 blocks (again!) were laid. Cement was also delivered. 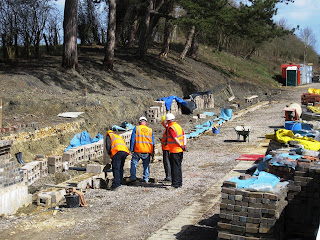 I had an interesting chat with someone who may be able to get us some doors for the lineside cupboards. 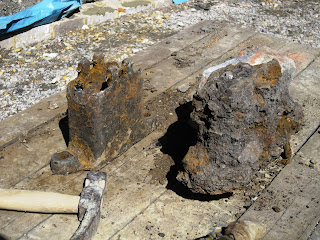 The cast iron object in the picture is one of two discovered near the goods shed while filling the dumper on Wednesday. One I have cleaned up, the other is completely encrusted, as found. These were rollers for the signal roddings of the round type.
I also did a bit more clearance – slowly but surely the garden is being revealed.
Jo