There were 15 Volunteers on site today, plus Steve Warren with the mini excavator. Steve had two jobs on his to-do list, one was to shave back the bank behind the existing Platform 2 wall and secondly to unearth as many concrete blocks as were available to start the lower block work on the next stretch of platform 2/2B. By the end of the day he had achieved both.

This picture on the right shows the first class job that has been completed at levelling and grading the embankment. Grass seed  required in a couple of weeks! 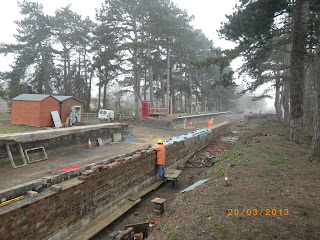 The first part of the day allowed the remaining brick laying to be completed on the Platform 2 wall. Clive and Steve finished the job of by noon. I have to say it looks brilliant. 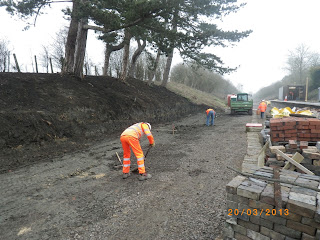 Back to more basic but vital jobs, inevitably there was some clay left on the trackbed after all the vehicle movement and Gord and Dave spent the best part of the morning scraping the clay off and raking a  rough surface back on . A back breaking job.

However the monumental achievement was from  Rod, Terry and Tony, helped pm by Gord and co shifted  336 concrete blocks using the dumper to load and unload. These blocks are heavy at the best of times, but soaked with the winters rain, well they must have aching muscles tonight!

Thankfully Jo will be back soon with his camera, so the photos should improve!

No, they will be longer at least according to this:
http://www.broadwaystation.co.uk/
If you go to the link above (Broadway Station), an explanation is given on the proposed station rebuild. As Broadway will be a terminus, at least for a while, longer platforms will be needed. I think 720 feet is the actual length. However, I'm not involved in the rebuilding work (sadly!) so the folks who are doing this fantastic job will no doubt confirm this.

TT
Yes this is the plan although I still have some concerns about the increase in gradient this will cause from the Springfield Lane Bridge to the start of platform, which of course has to be level.

A loco and nine Mk.1 coaches would be accommodated alongside a platform of 660ft.(excluding end ramps)