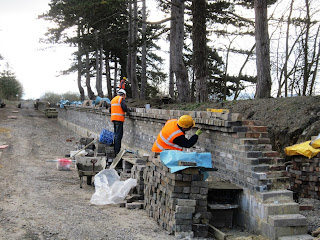 A chilly day today, and I was away in London this week. Nevertheless the  lads kept noses to the grindstone and carried on with the tasks in hand. The bricklayers couldn't be stopped from laying the penultimate row of corbelling on platform 2. Here Roger and Clive put the finishing touches to the days work. 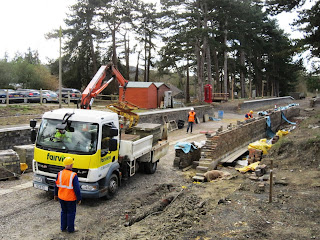 In addition 28 coping slabs were lined up to begin work on slabbing platform 2. This can only be done with the help of the Fairview Lorry and the careful hand  on the tiller of Richard, the driver and great supporter of Broadway. Thanks to all those who have made a donation to sponsor a slab - there are still some left unsponsored, for those who have been thinking they might like to help us! 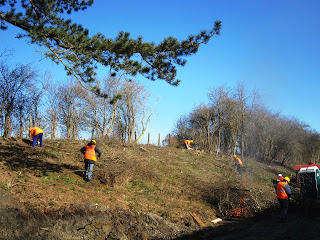 The other big task of the day was to clear the western embankment behind Platform 2/2B of the small trees and bushes (cut down on Saturday)that have sprung up over recent years. It was a glorious excuse to have a bonfire! However I am told this wasn't necessary for keeping warm, it was sufficient lugging the cut trees down the embankment to keep warm. This work is now finished until the end of the bird nesting season. 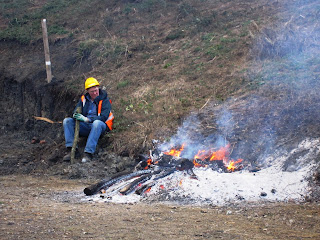 The end result was very pleasing and it all looks very neat - the Trackside Gang would be impressed I think, although not as cream crackered as the Broadway crew. Cheer up Dave it was a job well done! 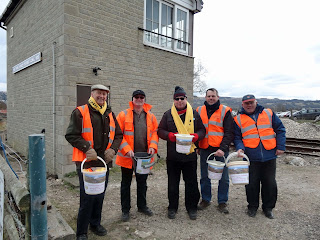 Meanwhile at the other end of the line, at Cheltenham Alan Bielby(second left) GWSR Projects Director had arranged, and participated in,  a bucket shaking initiative to encourage the Festival racegoers  crossing the railway line to part with their loose change for a Steaming to Broadway Appeal. This has been proving very successful and I would like to thank Alan for his help on this. Having done it last year for the Slip Appeal he might have reasonably left it to others to take up the initiative this time. But no, with the assistance of some die hard volunteers, which included some BAG members, Alan is hoping to survive the 4 days.

Terry, second from right,  from the BAG sent me this edited highlights:-

There were five of us at Cheltenham Race Course this morning doing a bucket collection from punters crossing our railway.
Bob Jones and I were on the public footpath quite a way down the line, where people are parking their cars in a farmers field then have to cross our line. We had great fun with the punters and managed to collect a fair amount of money, well in excess of £100 we believe. We also assisted in stopping people crossing when the two trains brought passengers into racecourse station and then returned to Toddington.
It was a very cold day, so I am glad we took Alan Bielby's advice and wrapped up well. 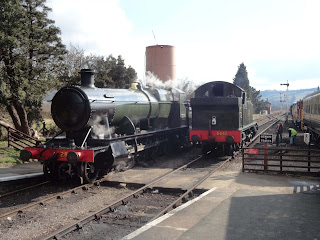 At the end of our collecting session all the money was poured into one bucket, which was half filled, and I am sure that Alan will give you some idea of our total. I managed to get a photo of the five collectors, and attach a copy. I did intend to take a few photo's of the trains pulling in, but unfortunately Bob and I were at the bottom of the embankment doing crowd control and my camera was at the top!
Bob and I then went onto the platform, when an announcement came over the tanoy for us to join the staff in the booking office for a welcome hot cup of tea and a chat, we were very greatfull for the invite and thank them for their hospitality.
A a big thank you should go to Alan for organising the collection and for attending on all four days, and also all the others that are helping to raise much needed funds for us at Broadway.
Bob and I then returned to Toddington and I took a photo of the two loco's at rest, and had a quick chat with Peter from Building Services (Peters the one in the yellow high viz jacket in the photo) I helped them to move concrete covers over a drain they were dealing with and then made my way home.

Thanks to everyone for their efforts today, I will be back on duty on Saturday.

It was good to pop by as the guys were packing up for the day (I was on my way home to Leamington from a business meeting near Cardiff) today, and thanks to Jo for sparing 10 minutes for a chat!