The  BBC weathermen say that 1st March is the first day of Spring(still the 21st in my book!). Well for once they seemed to be right because Saturday had that Spring feel about it. The day warmed up quickly, and the sun appeared. It seemed to give a new dimension to all the work that the volunteers had slogged away at during the cold winter months. The new platform 2  brickwork looks great and  now is such a length that you can see it follows the curve in platform 1. The good feeling spread to my volunteering chums and everyone set about a variety of jobs literally with a"spring" in their step. 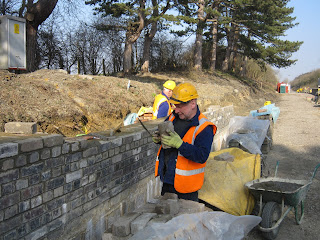 Tony and Clive continued brick laying on Platform 2. This job is going at such a rate now that  it will be touch and go if the new foundation will be ready for them to continue northward!  Therein lies the challenge!. 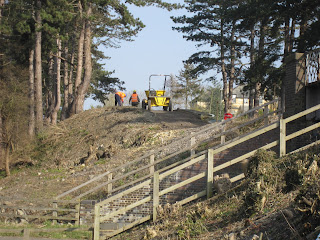 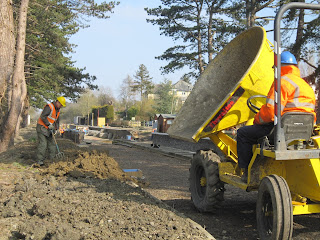 The work that Peter Hickox did filling in behind 2A was continued by John S and Roger Johnson. Roger has been away for a few months on winter vacations, and so it was good to see him back. The rear edge of the platform took many more loads of top soil. (See Jo's video below) However the end result was very pleasing and I will have to buy the grass seed this week!

On other fronts John B managed to single handily pack sand and bricks around the newly extended power cable, ready for some soil to loaded on top this week.

We have put up some warning signs around the site to to remind walkers that this is a construction site and a dangerous place to wander around at any time. We do not wish to deter supporters from coming along to see our progress - that's why we built the viewing platform. Please heed the message on the signs. 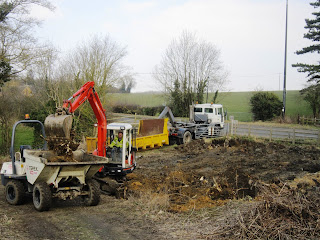 Finally I can report that a great job was done by Darren Trower and his excavator at levelling the volunteers temporary car park.  With Jo as dumper driver,  the area at the northern end of the planned car park was cleared. Approaching 100 tonnes of spoil, including tree roots, telegraph poles and old GWR rail fence posts was remove to southern end.  They continued until light once again stopped play. A brilliant effort.

A steam locomotive firebar (!)
A GWR chair
A signal rod (round)
The probable cast iron door for the stove in the former signal box (which was located just above)
An oak key for securing bull head rail to cast iron chairs
Two lengths of Brunel bridge rail, bent to make a fence end
A United Dairies milk bottle

Watch out for some more "specials" this week!

It's Darren Trower, not Darren Thrower.

May we see some photos of the artifacts found please!? Makes interesting reading of the Railway/Social History link!


Jason -I will see if Jo has some photos of the treasure found.