AWOL today in anticipation of a special job at Broadway tomorrow. However both Jo and Jim H  sent me an update and photos:-

An ice cold start today – 0 degrees, and damp. By lunchtime, it was almost hot, under a smiling sun.
We had a large group of brick cleaners, making a big effort to get us some reds 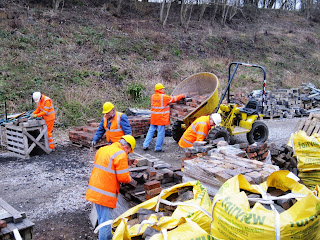 . Two dumper loads were transferred to platform 2 and stacked behind. 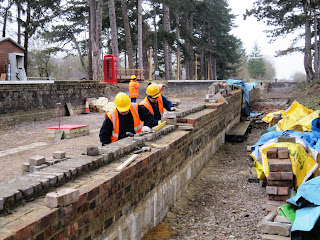 There, Tony, Steve, Clive and Bob spent the day brick laying, and succeeded in putting on a further 2 courses. Row 7 was reached at the northern end.
I pulled at the old foundations, and got about 1 dumper load of reds out of there. Plenty remain to be recovered, I would say two rows wide and 2 bricks deep for most of the distance along the next platform job. 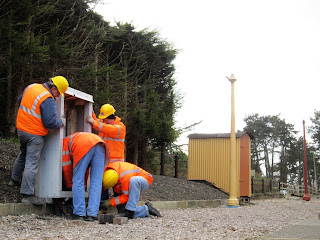 The 1C box was put op – looks very neat. Little Peter painted the running in board, while Jim carried on inside fitting out the container.

Greg W came and brought two bootfuls of Cotswold stone, which I have piled up on the flower bed wall. This is needed to repair and replace missing or unsuitable stones (some are concrete and rather unsightly) 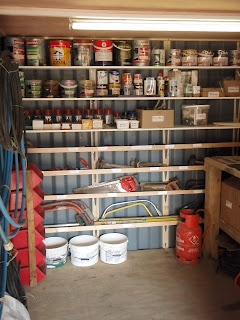 Had another day in the container and have just about finished sorting out the tool storage.  Peter was also in there painting so it was a bit cosy at times.
Have cleaned up your light from the telephone box and left it on the workbench, see photo attached. 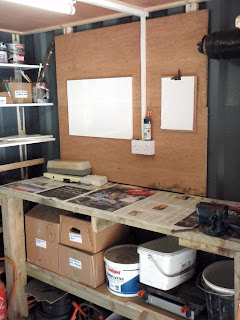 It works, though it takes quite a while to come on.  Probably a sign that the chokes are on their way out!!

There were 13 of us today and I attach a couple of photos taken about 14:30 when the sun came out.

And a couple of specials from Jim and Jo


An Addendum The Forgotten Two!

Terry pasted this information on to me and it rightly should be included!


Just to add to your blog, Rod and I took a trip to the end of the proposed car park, Childswickham end, as Rod had noticed that the pipe under the road appeared to be blocked by debris. We took shovels and a rake and cleared the bank of a lot of vegistation, before I got down to the actual stream and cleared out broken branches and leaves that accumulated at the mouth of the pipe. I must admit to being the warmest

I then cleared about 50 foot of stream, as much as I could, of broken branches and more leaves and whne we finished the water was again flowing ok. We also had a chat to quite a few walkers (with and without dogs) who were all supportive of our efforts and pleased to hear of our progress.
Rod discovered, underneath the grass and weeds near the gate, at the top of the bank, the remains of a asphalt paved area. One of the people we spoke to said it used to be a road to enable farmers from the Childswickham area to bring their produce to Broadway, some of it going by train. He also told us that he remembered driving a fire engine along it, so it must have been quite wide and long at one time. At the end where we were working, there had been a couple of unofficial allotments, however, it appears that the people that kept them gave up, as the produce kept going missing

We finally noticed that time had passed and it was now 4.00pm, so made our way back to base along the PW to find the place deserted!

Great efforts ....... good to see the Broadway team are maintaining a fine railway industry tradition of installing a Loc Case by committee :=)

I popped into Broadway today as I was passing, (I live in Devon). Great to see the progress you are making.
And a big thank you to the Gentleman who took ten minutes out of his time to explain what was going on.

Great work on the blog and station reconstruction folks - I really enjoy it from afar, and hope to visit soon.

I think someone mentioned it before, but the old milk dock at West Ealing is due to be demolished by Crossrail shortly.

The whole platform still exists - complete with coping slabs and a lamp hut. Also, it has good road access from Manor Road, so might be worth a conversation?

You can also just about see it through the railings on Google Streetview...

Thanks for the tip off Nell. I will follow it up.