Michael Portillo on location at Minehead

An avid  Broadway Station Supporter, Roger Bush, happened to be on vacation in Minehead when this weeks episode of the Great British Railway Journeys was being filmed last year.

Roger sent me  the following  three excellent photos with a summary of the action:

We were on holiday in Minehead at that time, and by chance were at the station as it all happened. 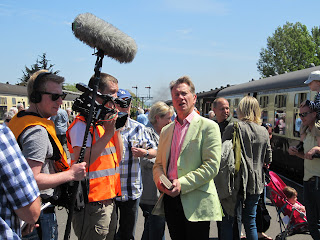 The crew were there almost 2 hours.  I have attached some pictures of the event. 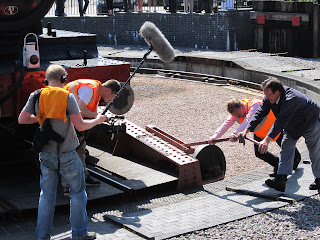 The girl pushing the turntable appeared to be the director. 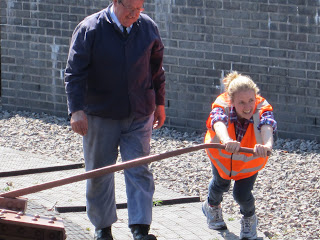 A mere dot of a thing she wanted to have a go at pushing the turntable - so they let her and looked on!  No one was on the other end - male chauvinism was alive and well that day!
Thanks for the ever entertaining blog - and the volunteers behind it.

A footnote - I wonder whether the young lady in question wants to volunteer at Broadway on Weekends!

Also don't forget the super Jon Wygens music can be played from the audio slider at the bottom of the page. I haven't yet managed to find a way of squeezing it into the side bar!
Posted by Bill at 19:55