The Wednesday Gang were divided into two camps today - those holding the fort at Broadway and those moonlighting at Winchcombe, recovering bricks from the Goods Office.

At Broadway a determined effort was being made to clear the track bed between 1A and 2A (the first section of track has to go in somewhere?!).  Roger, Steve, Gord and Tony set about filling dumpy bags with lose bricks, gather together other brick cleaning paraphernalia , awaiting the return of the Fairview lorry to move them to the northern end of the site.  An arduous day saw the most of the job done, before the lorry went back to Winchcombe. The task was virtually done and when you consider it was only 4 people working on it, it was a remarkable effort. Mike Speake continued with the shelving task in the Shed and I can't wait to see how quickly  Marguerite fills the extension. Please come along, see the extension and help Marguerite with her fund raising for us.
As ever David and Chris were cleaning bricks.

At Winchcombe - going, going, not quite gone -   the  Goods Office that is. 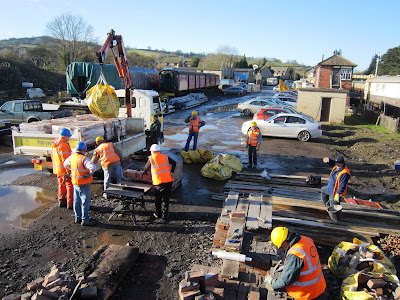 10 Volunteers were at Winchcombe, working at a punishing pace to try and get the bulk of the remaining building down in a day. Here we see Richard loading up the Fairview Lorry with the first load of bricks. The bricks on pallets and shrink wrapped have been cleaned on site and are ready for use. The ones in dumpy bags will be cleaned back at base. 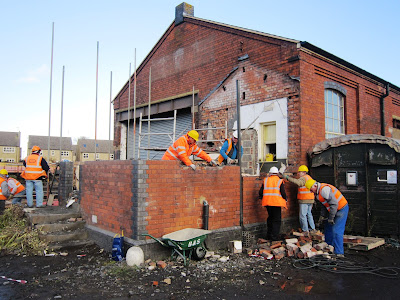 By lunchtime the scaffolding needed removing, as the remaining courses were low enough, and  access was impeded by the scaffold platform. The remaining energy was put into filling enough pallets for a second load on the Fairview lorry. 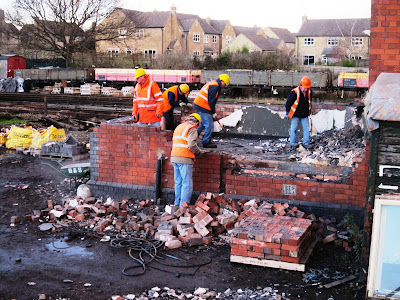 By the end of the day a modest section of the wall and the blue brick plinth remained. Enough for another day or so. The main virtue of the excellent progress was that the scaffolding could be taken off hire and its being collected tomorrow!

What struck me about the bricks as I shifted a few this morning was the super quality of them and I am going to find a way to put them in pride of place on some building at Broadway. The Platform 2 Waiting Room is favourite.

Thanks to all the chaps today who worked so hard, both at Broadway and Winchcombe. I only did the morning at Winchcombe and frankly I was cream crackered when  I moved on to other things at lunchtime!
Posted by Bill at 20:48

Excellent idea about saving the bricks for use on a building, the stations goin to look real period :), u should use lime mortar too!

Actually I found it sad to see the office part of the old Goods Shed go - I presume the building never attracted EH's attention. It will be good to see it live on in something that apes the same period at Broadway. You'll be getting another slab from me later Bill.

Howard,
Thanks in anticipation of slab donation. It is always sad to demolish a piece of GWR architecture, no matter how humble. It was essential to make way for the new C&W Paint Shop which is vital if we are to keep the rolling stock in good shape and well presented. Broadway got involved because the alternative was pay a contractor many thousands of pounds to demolish it and put the bricks through a crusher! We have some good plans for these bricks now. Also remember its not the the last Goods Office on the Railway!