There was a scheme afoot to do some serious bricklaying today whilst some of us are on a seasonal break. It was all founded on  a goodish weather forecast mid week. Here is Jo's report:-

The Met Office got it really wrong this time. We decided to push the button for a brick laying session last Wednesday, when the forecast for Saturday was full sun.
On Thursday the pictogram said half sun, and a rain drop.
On Friday evening, it said ‘ heavy and persistent rain, with high winds’  and this was true ! 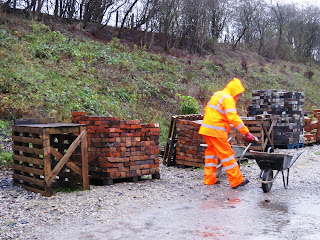 Despite the wash out, 8 volunteers turned up, and after an extensive session in the cabin, with tea, on the finer points of the packaging of model railway wagons, we ventured out in the rain to set up a supply route of bricks for brick laying at the rear of platform 2. A veritable fleet of wheelbarrows supplied Bob White behind the platform wall, who directed them towards a series of rising towers from which the brick layers could take their bricks for laying. These were then all sheeted over to keep them dry. Something over 1000 bricks were transported in this way. 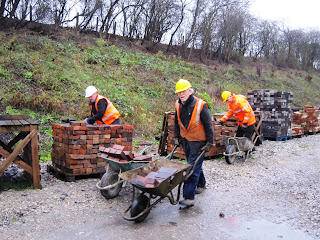 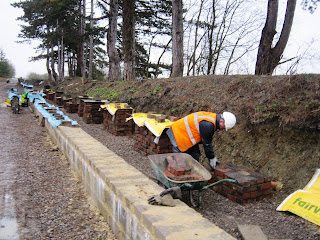 After lunch, in the face of a fresh assault of rain, we called it a day. Marguerite was there and carried on, with some customers and visitors, including two who were just setting off to walk to Winchcombe ! 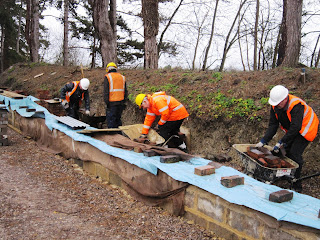 Weather permitting, we decided to launch a fresh attempt at brick laying on Wednesday.

NB The orange man is Jim, in his new Hi Viz outfit. It was severely tested straight away !

Thanks to everyone who turned out today - Its another 1000 bricks that won't have to be moved next time!
Posted by Bill at 18:24

Well done to everyone for turning up on Saturday and braving the weather.

Hopefully it will be better on Wednesday if anyone is turning up. I will make it if it is on.

Hope everyone had a good Christmas and may I wish everyone a Happy New Year.

Great progress guys, how's the drainage system holding up on the wettest year since records began?!