A great volunteer turnout today - 19 troops all ready for action. 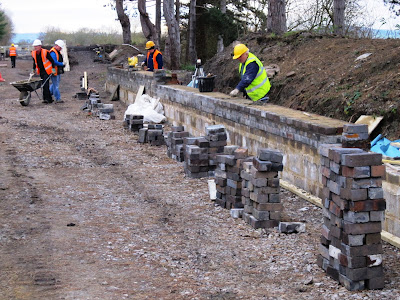 The brick layers were back on Platform 2, and it is coming along nicely now. Here Bob W.  Bob J. and Clive set to on courses 4 and 6. None of this could be done without Paul (with the barrow) delivering the mortar at regular intervals. Unfortunately the prospect of a frost  meant that the wall had to be tucked up by 2 pm. Nevertheless great progress was made. 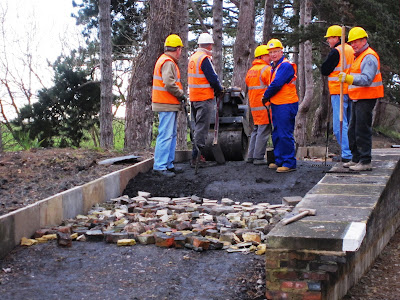 On Platform 2A the final layer of infill was dumpered in and rolled.  As I've said before, raking the ballast, particularly when its so wet is not for the feint hearted.

It started out with many hands making light work, but as the day progressed other priorities kicked in and so the numbers reduced to the diehards!


The other job which drew  the team off 2A was the shifting of the southern brick cleaning area and all of the uncleaned bricks to the northern end. This was done with the help of the Fairview lorry and of course their driver Richard. What would we do without him! 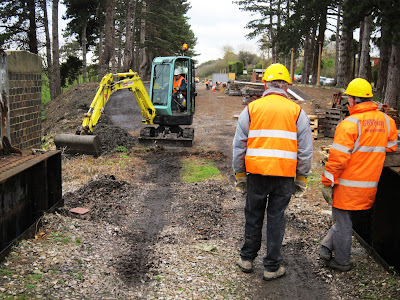 John Crawford took time out from recovering ballast with the mini excavator to carry out the re profiling of the embankment by the bridge. The end result was really pleasing and gives a very neat appearance to this side of the embankment. 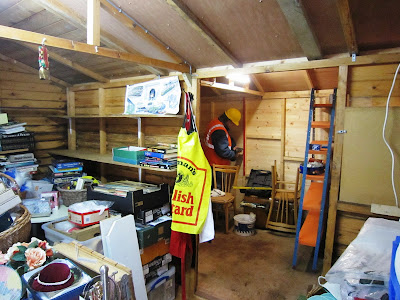 Marguerite's shed got its final coats of wood preservative on the outside and some shelves on the inside. Please come and visit Marguerite in the run up to Christmas.

The added incentive this week is some free round trips being made by Graham Smith and his Routemaster to Broadway Village. Start your Christmas shopping in style!

A big thank you to to Radio Winchcombe who came along to see and hear about the progress being made at Broadway. They are great supporters of the Railway and do a regular feature on the GWSR. Thanks Alan! 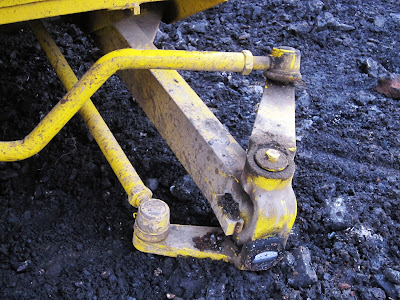 Now the bad news of the day - our workhorse, the Thwaite dumper sheared a stub axle and thereby came to a grinding halt. The cost of a new stub axle is £284 plus the labour to put it right. This is a great blow to us, not only  from the cost point of view but also from a progress point of view. When I hear that diesel thrumping by, I know things are happening - things are literally on the move and going to plan. If anyone has any thoughts on a source of  reconditioned spares, or labour to put it right, please let me know. We will be lost without it and it will slow us down..
Posted by Bill at 20:32

Maybe it would be worth asking Thwaites themselves if they would donate a stub axle. They are after all, only based up the road in Leamington.

BTW I work for First Great Western, whilst berthing a train in platform 6 at Taunton (the up side bay platform) I noticed a load of blue bricks as demolition spoil from a railway building on the off side. There was also a lot of blue square floor sets from outside the demolished building. just a thought to check out if you are recovering from teh Taunton area again.

Thanks for the suggestion and I will follow up on the bricks.

I live one mile from Thwaites', for what it is worth, which is very little I suppose.