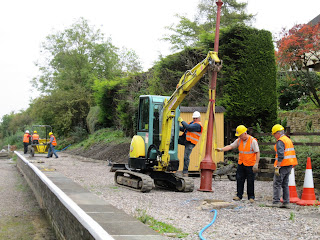 What a great turn out today - 18 volunteers covering at least 5 ongoing projects.The installation of the lampposts on 1B required the usual ingenuity in ensuring they were all vertical, in line and with the draw strings in the right position. We had a 3 tonne mini excavator deployed to make the job as straightforward as possible. Here lamppost number 1 is maneuvered into position with a steadying hand from Tony and Peter H, and John Crawford at the controls of the mini excavator. 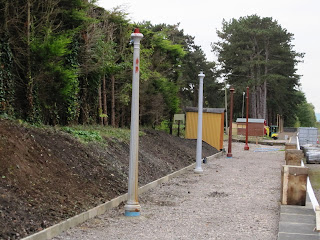 By the end of the day four lampposts were in position, straight and true, and as Jo remarked when sending the pics, the lampposts seem to now "join" platforms 1A and 1B. A great job!


Prior to the lamppost going in it was necessary to spread some topsoil on the 1B embankment to finish it off. This required the dumper to straddle the lamppost sockets. Many dumper loads later the job of loading and raking the topsoil was done and the embankment really looks "finished". 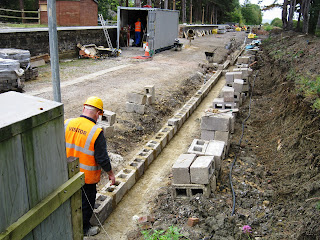 No less a job was going on on Platform 2 where Clive, Ron, Jo and Steve Warren were laying blocks and securing them with rebars. 46 blocks were laid and 40 rebars deployed. It was a backbreaking exercise lifting and position the concrete blocks and I admire their stamina! 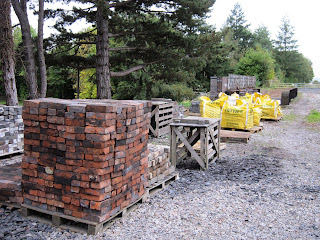 At the far end of the site brick cleaning was in progress and a remarkable effort produced this pile of bricks for backing up Platform 2!

Thanks to all of the team today  - the 2 Peters for their work on the viewing platform and Jim H for his efforts on the catch pit covers.

Have the Worcester College people abandoned us? If so, have you approached Gloscat in Kingsditch. Thet have carpenters & plumbers as well. Best wishes - John O

The Worcester College lads will be back soon when they have goy their course work sorted.
I hope the Gloscat College can help at Cheltenham.