At last some Autumn sunshine today, which encouraged  11 volunteers to press on with the jobs in hand. There were 3 main tasks for the day:- 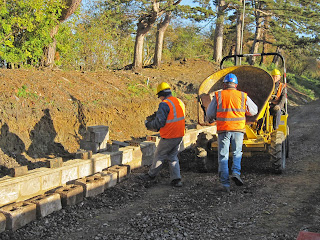 Steve Warren had been in to free up some more blocks to finish off the 3 courses on Platform 2. Here Jim and Mike unload the blocks from the dumper. Is that Robin I see on the Dumper? Yes indeed he's done it all before on the Bluebell! 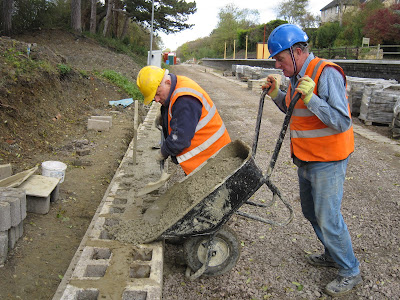 The block laying on Platform 2  then continued at a pace. The 3 courses of blocks were finished off by Bob and Jim,  who were then able to fill the voids with concrete.


At the other end of the run Clive laid the "top blocks" with precision, so that normal brick laying can start next week. 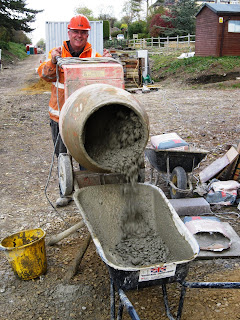 Of course non of this would have been possible without the back up of the "labourer"  (ie the lynch pin to the whole process)! Jo took this job on, much like all the other jobs he sets his mind to, and luckily we got a picture of him today! 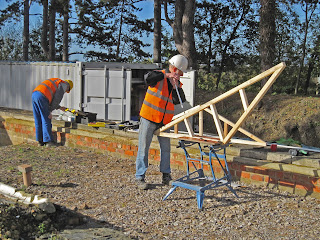 On other fronts The two Peters came along in the morning to progress Marguerite's Shed. It really is coming along nicely. Thanks chaps for the extra time today.

Last and by no means least, a team of four set to at clearing the embankment south of the bridge. The fires were burning until the Caravan Club put in a friendly protest - sorry folks. 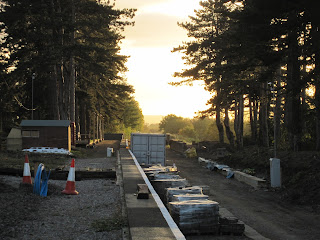 Finally a nice end of day shot taken from 1B looking across towards platform 2. Cheers Jo!
Posted by Bill at 21:52

Now, just swap the container for a Castle. and the pallets for coaches.........

I see that a study has concluded that there is a case for re-opening the Stratford to Long Marston section, and reinstating the N-E curve at Honeybourne. Shakespeare Express? That's what I call a dream to aspire to.

Now it's further for us to get to Honeybourne from the current rail head so if a generous donor ..........

Further to my 'sunset' picture, can you imagine the atmosphere when the light of the setting sun catches the steam and a glint on the boiler of the incoming train?

I'm not impressed with the comments from the Caravan Club. How else can you get rid of the overgrowth cheaply other than resorting to very expensive methods (aka Land Fill etc.). I'm a member of the Club and there is an element creeping into the Club that wants the least disruption to their time away (no noise, children, dogs, smells and bonfires). Considering that what you are doing will significantly enhance the appearance of the old station site and the potential benefit to Broadway. It's very churlish of the CC to complain about the work you are doing unless their is some ulterior motive in their relationship with you.

We do our best to co-exist with all our neighbours and we wouldn't want anyone to be put out by our activities. It's down to us to be more careful in the future. Enough said!

shouldn't have sold the goods shed, a decision maybe that'll come back to haunt the board