Wednesday and Pushing On!

We had a group of 15 visitors today from the U3A Society, being hosted by Henry Howard. They all seemed interested in what was happening at Broadway and were complementary about our efforts. They were then moving on to visit the rest of the Railway. A very pleasant group of people.


Our efforts today concentrated on three area. Firstly the cleaning and leveling up of the Signal Box area. The two lamp huts were carefully moved, one to its final resting place on Platform 1. 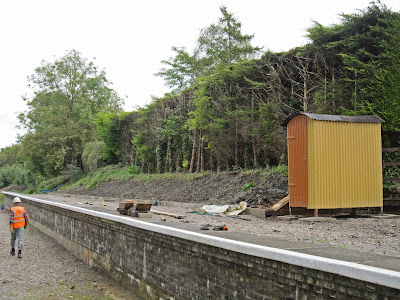 This is quite a historic moment with the first placement of a building that was originally there in 1920. 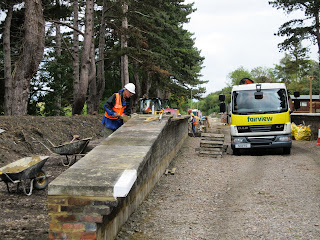 Richard from Fairview came along to assist in laying 7 slabs on Platform 2A. This was followed in the afternoon by by adding another 15 blocks to Platform 2. Great stuff!

It gives me the opportunity to  call for sponsors for the platform 2 slabs. Sponsorship is £20 per slab and you will receive a numbered certificate to recognise your valuable contribution. Forms can be obtained on site from the Broadway Shed or alternatively downloaded from this location Forms. If you only require your name to be associated with a particular slab on a roll of honour then a donation of £20.20 on Paypal will achieve this. Please help us if you can. I know I seem to put out this plea so often, but I hope you can recognise the progress we are making.

Great efforts are being made at Ashchurch to complete the brick reclamation. Pete from Building Services took some more pallets over for us this morning and brought a load of blues back.
Terry filed the following report:-

This morning, Andy, Steve, Bob W, Paul & myself were at Ashchurch, recovering, cleaning and palleting red and blue bricks. As you know I left there at about 10.00am to come to help Roger put coping slabs onto 2a (7 done in total, need a cut down one (2ft) to finish the incline.

Then went back to Ashchurch,, where Paul from Tecton turned up, and we loaded 4 pallets of blue bricks, which we hope to deliver either Friday or Saturday to Broadway. We continued to clean and pallet bricks and there is now one pallet of blues and one pallet of reds shrink wrapped and ready for collection, along with about 8 bags of broken bricks.

All the bricks are now removed from the walls, so further recovery will concentrate on the floor after the current bricks are removed.

It poured this afternoon, but that didn’t stop us, as we were wet, we just continued on until the two pallets were completed.

I didn’t have my camera, not sure if Andy took any photo’s. I know he did when we stopped for dinner, but these were of a Class 60 on tankers, two class 37’s on nuclear flasks and a class 70!

Thanks Terry and thanks, as ever, to Jo for the excellent pics

Andy has sent me this excellent circa 1959 photo of the Stables from  Network Rail Incident Room at Ashchurch, kindly sent by Paul, one of the incident support guys. In the foreground a Stanier 0-4-4 awaits the next job. Is that Jim Graham lurking round the corner! 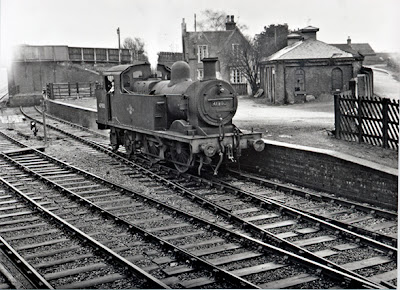 I am so please that the BAG Volunteers have rescued the bricks from the stables and that they will be recycled rather than going for hardcore.
.

Excellent work as usual by all concerned. Would it be possible to do a then and now comparison picture of the lamp hut in its final position? Regards David

David, I will see what I can do.
Bill