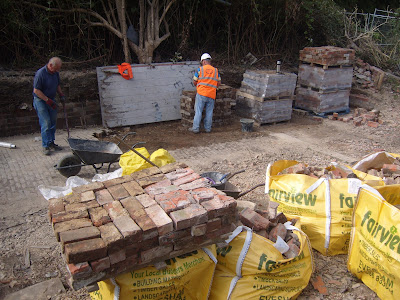 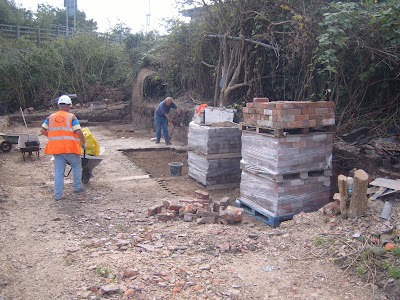 Firstly a big thank you to the volunteers that went to Ashchurch - they are keeping this project on target to finish by the end of the month. Bob W, Bob J, Ken, Steve and Andy were there today, doing their stuff. As you can see they are now lifting the engineering blues from the floor and they are not bad at all. Terry and Paul are doing a transporting run tomorrow. What more can I ask!


Well where shall I start?! The first major event was the arrival of the Taunton bricks. They were unloaded in the driveway ready to be transferred onto site by the JCB. The second lorry load  arrived  later in the morning.A total of 33 bags of mainly red bricks. Weight? about 50 tonnes! 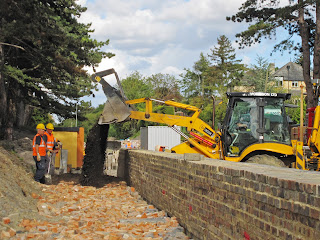 On site the Ashchurch rubble was neatly distributed in a single layer behind 2A and then ballast poured on for levelling. This level is being brought up to the depth required to fit the lamppost sockets, and of course to allow a good working height for  laying the the coping slabs. 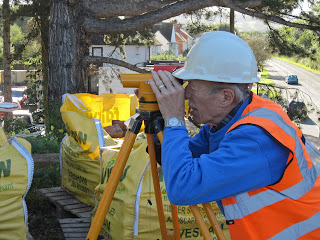 Having got the footing in for Platform 2 is was time to set out the line of the platform wall. Here Gord the Theodolite  does his stuff at checking the offsets before marking the front of the wall. 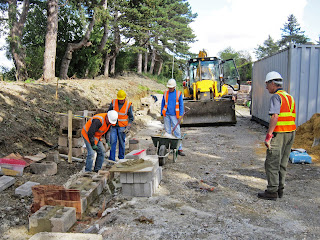 The wall building then started in earnest! Two layers of concrete blocks are going to bring the wall up sleeper  level. In order to to that we had to retrieve sufficient concrete blocks to complete the job.


As I've said many times these blocks are extremely heavy and I take my hat off to the group of volunteers who stacked  all 200 of them!


On other fronts we had an onsite meeting with the Wychavon Planning Departments Tree Officer and I think I can declare we have a clear way forward for the signal box footings.

Also the beautiful (yes I know but it's in the eye of the beholder!) Scammel rig has been moved off to Toddington for exhibition. I was sorry to see it go.


Thanks for all the visitors that came today,  particularly a blog follower from Baltimore USA  . That's enthusiasm for you! If I sold anyone short, apologies.

Looking at some of the photos, when the next stage of platform 2 is constructed, wont lorries like the cement mixer and brick lorry have dificulty turning onto the trackbed? especially with that container there

The container wil be moved northwards beyond the current working area, before we put any more footings in.

I am also a regular blog follower in Alberta Canada. I always make sure to visit the station site at Broadway when i'm back in England to see the absolutely incredible progress that is being made. I must also say how fantastic the blog itself is. Thank you. Living abroad I can still stay up to date with all of the exceptional work thats going on and I really appreciate that. I always look forward to the weekly updates, particularly during the long winter months!

Bill, I am struggling to keep up with the number of jobs the Broadway Team are working on this month, excellent progress.

I follow the blog from Ontario Canada and can say that the progress is fantastic, I last traveled the line on 6th January 1962 behind 5031 hauling the northbound Cornishman, and hope to visit and ride the line again soon.

A big "thank you" to all of our supporters around the globe. Although far away your moral support is vital to our cause.