A different day today with our activities split between tasks on site and attendance at the Broadway Horticultural Show. Nevertheless a very productive day all round. 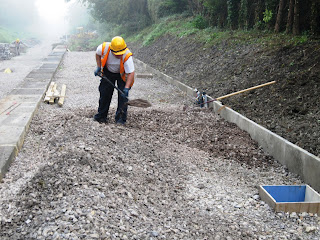 On site the Saturday Gang continued the tidying up tasks from earlier in the week. Clive shovelled, raked and rolled 4 tons of ballast on 1B. It was just as well this was earlier in the day (see the mist rolling through in the background) as the heat later in the day would have made this doubly hard work. 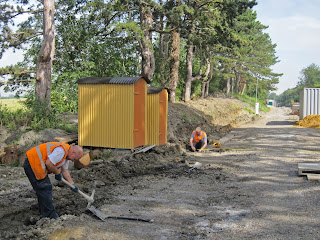 As if shifting the ballast wasn't enough punishment Clive went on to clear the old platform 2 foundations so that I could mark up the center line of the new footings.
In addition to this work Dave Bowie  and John Simms continued to fight back the weeds on the Station platform surfaces. At the north end of the site Robin and Vic continues with the dreaded brick cleaning. 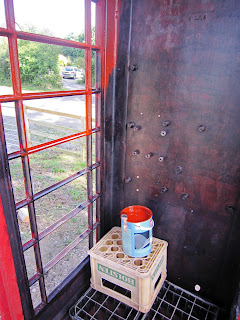 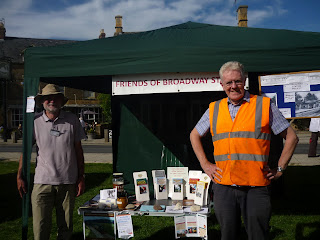 It was the annual Broadway Horticultural Show today and the Broadway Area Group take part with a stand  among all of the other stall. It's always a busy, happy occasion and we get the chance to meet many people who are interested in our work on the station site. Here John Blofield, (who does all the work in getting the stand together) and I  enjoy the late summer sunshine. Vic Smith kept John company today and talked to the many supporters. 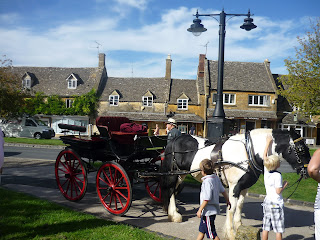 The show has lots of entertainment. Here for the kids(7-70) is the chance for a ride on a pony and carriage. Anyone want a trip to the station?! 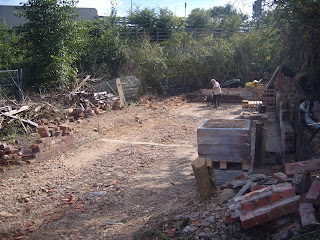 Ashurch
Bob and Andy persevered with the brick reclamation and managed another 3 pallets for collection. This was quite an achievement on such a hot day. Thanks for the photos Andy.

Phone box update:
Thanks to the dry weather I have been able to make good progress at last. The interior has been completely stripped of old paint, and I spent quite a bit of time discovering and then cleaning the ventilation slots under the 'TELEPHONE' transoms at the top. They were full of old putty, rust, broken glass and old sealant, the whole painted over and thus effectively sealing the slots. I applied a coat of rust converter, and then followed up with red oxide, so that about 90% of the in- and outside is now ready for a first layer of GPO red topcoat. I also stripped the inside roof and after rust proofing, applied a layer of white primer. Now we need an original, circular light bulb fitting.
Once the red top coat is on, we can start putting the glazing back in. I have done a trial fitting of one or two glazing frames, and they fit just great ! They are secured by genuine brass pins. Paint, glass, new frames, sealant and the pins were all acquired in a package, thanks to the generosity of the K6 supporters club. Thank you all! You made it possible.

Well done on the box - another place to get out of the rain until the waiting room is built?

On a similar subject, what are the plans for all these PW huts? Surely too many for just Broadway?

I think the blogster made it clear that not all the lamp huts (P-Way huts are bigger and usually made of brick or old sleepers) will remain at Broadway but that some will move elsewhere on the Railway once suitable homes are found; I can think of 2 boxes that need them - Cheltenham and Gotherington.

Re lamp huts - we currently use them for local storage but some will be moved to other parts of the railway in the future.

The Projects Director is responsible for the planning application submission and I hope it will be made within the next 6 months.
Bill

Thanks for your quick response.

Please excuse my ignorance, but who is the Projects Director?

Hi there...I'm an occasional visitor to Broadway and stay on the adjacent Caravan Club site..each time we stay I always look to to see what progress has been made at Broadway station..Now by viewing your website I can see your coming on very well indeed..well done to you all...fantastic pictures for all to see..cheers..Bryan